Making a living in the USA

There’s something undeniably appealing about the American Dream. The idea you can be who you want and realise your full potential in the Land of the Free.

Traditionally the USA was founded on attracting talented immigrants from around the world and bringing them to the USA. It’s one of the world’s largest economic powers, supporting more than 300 million people across six different time zones. But post 9/11 and in the age of Donald Trump and his anti-immigration stance, exactly how easy is it to move to the USA? And how and where should you set your sights to make a living?

In order to work legally, you’ll need a green card.

Benefits and downfalls of making a living in the USA

Immigration rates to the USA remain high, despite greater restrictions on green cards, with around a million people successfully making the move every year. If you’re among those successful applicants or are offered work via your company, you will benefit from high wages, first-class infrastructure and access to some of the best healthcare and education in the world…if you can afford it. On the flip side, if you require financial assistance, things are much trickier than in the UK. You also get less holiday and competition is high for jobs in the major cities, meaning you’ll have to be prepared to work hard to get ahead.

Working legally in the USA

If you plan to move to the USA permanently and haven’t yet reached retirement age you’ll need to find work. In order to work legally, you’ll need a green card. Two of the most common ways to secure this valuable document are via your job and via a family member.

You can be granted the right to work in the US by receiving an offer for permanent employment. In order for this to go through, you’ll require a labour certification and then a Form I-140. This is an Immigrant Petition for an Alien Worker. The employer offering you work will normally have a system or HR team to take care of this for you.

It’s also possible to secure the right to work via having skills that are considered ‘specialist’, i.e. broadcasters, members of the Armed forces or employees of specific international companies. You can see whether your role falls into this category here. Alternatively, if you are planning on investing in the USA and can prove you have the funds to support ten US citizens in full time employment, you could be granted an investor or entrepreneur green card. You can read about all your green card options on the US Citizenship and Immigration website here.

Through a family member

It’s also possible to secure a green card if you have an immediate family member who is a US citizen. Congress has recently reduced the number of family members who are able to enter the country this way. So do expect a considerable waiting period if this is the route you have to go down. Immediate family members include: spouses, unmarried children under 21 and parents over the age of 21. It’s also possible to secure sponsorship from a family member who falls outside the ‘immediate’ category. This route is known as the family preference category, and caters to children over the age of 21 and brothers and sisters. If you’ve just got engaged to a US citizen you can apply for a K-1 non immigrant visa, which fast-tracks you (and your children).

Wherever you find work and set up home, getting a good deal and buying under market value is often a question of good research and planning. Read our guide: How to Negotiate Abroad, to maximise your bargaining position.

Where in the USA can I make the best living?

If where you settle doesn’t depend on a job offer in a specific spot, it’s important to consider where you’ll be able to progress well and make the best living. Each state in the US has its own legislation, tax rates and cost of living – always factor these in before making a decision. Last year, MoneyRates.com, a personal finance website, studied information from the US Bureau of Labour and Statistics to establish the best and worst states to make a living. This was based on average wages, state tax rates, unemployment rates, workplace injuries and cost of living. Here is a brief summary of some of best spots…

Washington State has consistently ranked first or second as the best place to earn a living in the US for the seven years that MoneyRates.com have been completing the survey. The north-westernmost US state not only has the fourth highest median wage in the country, but it is one of only nine states not to tax income. It ranks well for workplace safety and unemployment, but cost of living is 7% higher than in all other states. The higher income should take care of this if you are employed in an in-demand profession. 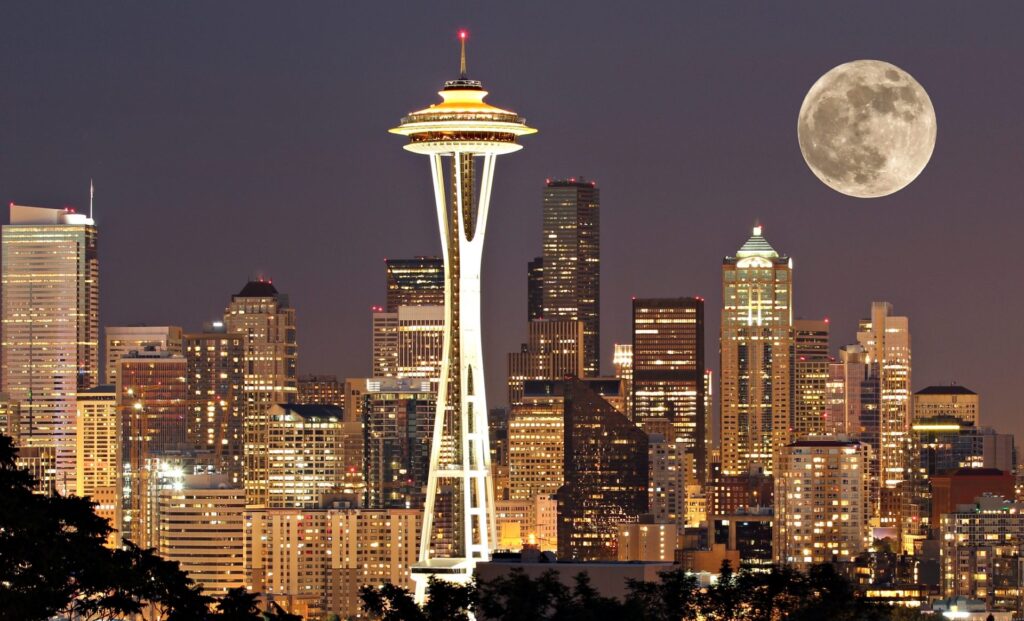 Seattle is the capital of Washington State, one of the best places to make a living in the USA.

Minnesota also comes in the top ten in the country for its high wage level. It’s a great spot for finding employment easily and for it being a safe place to work. Again, there is a drawback which in this case is that it has the fifth highest state income tax in the country. Realistically though, this is likely to be offset by the high wages if you secure the right position.

Illinois ranks well above average in every category of the study bar unemployment. The rate in 2017 stood at 4.9%, which was just below the average rate of 4.3% seen across the nation.

For the last seven years, Texas has ranked in the top ten for this study. If the idea of no state income tax appeals, this could well be the state for you. The added bonus here is that cost of living is so low that your untaxed wages will stretch even further. Do bear in mind that the job opportunities are located in the cities – Austin, Houston, Dallas, San Antonio and Fort Worth are the best spots. Elsewhere in the state, unemployment remains high.

If the idea of no state income tax appeals, Texas could well be the state for you.

Colorado has the lowest unemployment rate of any US state at just 2.6%. The state also performs well for wages, but slightly less favourably in the cost of living and tax categories. The most popular locations include Boulder, Colorado Springs, Castle Rock, Fort Collins, Lakewood and Pueblo. If its natural beauty you’re after, this could be just the state for you.

The rest of the top ten was made up of Wyoming, which performs well in wages, low cost of living and as being another spot with no state income tax; Virginia, which has also ranked in the top ten for the duration of the survey and is particularly good for wages and employment rates; Ohio comes in eighth due to low tax rates and cost of living; Michigan takes ninth position, followed by Kansas at number ten, mostly due to the affordability factor.

For a detailed explanation of how you can protect your protect budget from currency risk, read the Property Buyer’s Guide to Currency. It is written by our currency partner Smart Currency Exchange, rated “Excellent” on Trustpilot.

The survey also revealed the worst places to make a living. Hawaii has finished last every year due to high cost of living and high taxes, which are the third highest in the country. However, unemployment in the state is the second lowest in the USA…and you have all that beautiful scenery to make up for it! California comes in second place, due again to the high cost of living. Montana takes third due to low wages and poor workplace safety, West Virginia is in a similar boat.

The fifth worst place to make a living in the USA is Vermont, due to the high cost of living. Having said that, it is very easy to find work in the state. Oregon appears in the bottom ten despite being one of the most popular states in the country due to having the highest state taxes out of all fifty states.

South Carolina ranked badly for workplace safety, average wages and state income tax. Maine secured eighth position due to its higher-than-average cost of living and having one of the US’s highest state income tax rates. New York ranked poorly because of the to-be-expected high cost of living and taxes. Number ten on the worst places in the US to make a living list is Mississippi. While it is the cheapest state to live in by a good margin, it also has the lowest median wage. The state also performs badly for workplace safety.