The Sunshine State’s success as a tourist destination is breaking yet more records. It’s all good news for Florida’s property market in summer 2019 too. Refreshingly detached from the Brexit saga and enjoying booming levels of tourism, Florida is an exciting place to be property-hunting right now. If you’ve always been tempted by a Disney home, here’s why 2019 is the time to make it happen!

Florida has cemented its position as one of the world’s greatest tourist destinations. That’s great news for homeowners there, especially those who rent out their property.

The Sunshine State welcomed a record 126 million out-of-state visitors last year, according to Visit Florida. This marks the eighth consecutive record year for tourist numbers in Florida. Indeed it exceeded the previous record of nearly 119 million visitors in 2017 by a stonking 6.2%. And the momentum just keeps building – tourist numbers for the first three months of 2019 are already ahead of 2018 (Visit Florida).

Earlier this month, tourism officials at Visit Orlando revealed that the number of visitors to Orlando also has reached unprecedented levels. A record-breaking 75 million of us went there in 2018, prompting them to refer to it as “a historic milestone for the US travel industry”. This represented a hike of 4.2 per cent over the previous year and confirms Orlando as America’s most-visited destination. “It was another record-breaking year for Orlando with both domestic and international visitation,” enthused Visit Orlando President and CEO George Aguel at a conference. “We saw strong gains from all of our core countries, particularly from Latin America. This success is a testament to the special appeal of our destination that continues to grow and evolve, as well as our strong commitment to strategic marketing initiatives.” 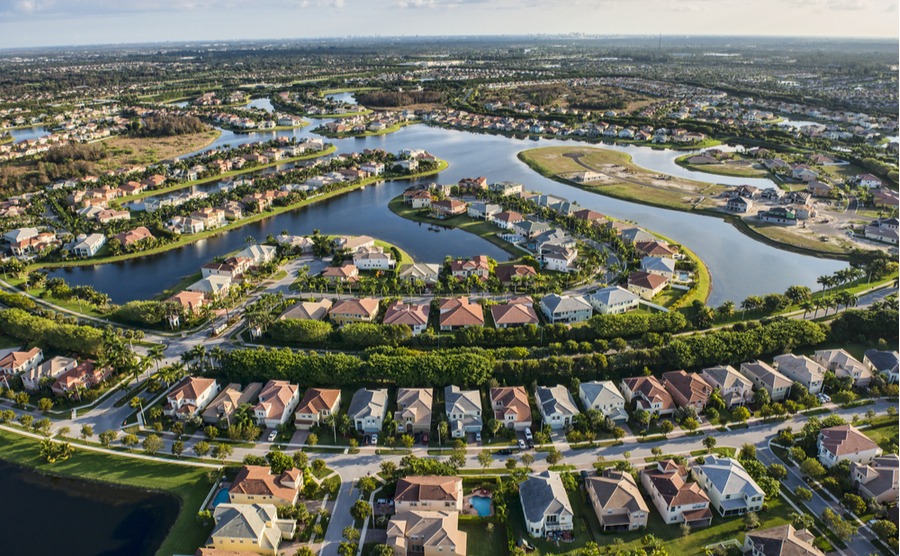 South Florida, where the land may be flat but prices are rising!

In it for the ride!

Home to seven of the world’s top ranked theme parks, hence its nickname ‘Theme Park Capital of the World’, 2019 is set to be a landmark year for Orlando in terms of new rides or experiences. One of the most anticipated is Disney’s new Star Wars land, Galaxy’s Edge, scheduled to open at Hollywood Studios in the autumn.

Not wanting to be left in the shadows, Universal Studios’ big launch this year is its new Harry Potter ride. The theme parks are a major draw for property-buyers in the Orlando area, so much so the most sought-after vacation homes there are within 15-20 minutes of Disney World and the other main parks.

With the wildly fluctuating USD/GBP exchange rate at present, remove the risk that the value of your pounds will drop in the year ahead. Find out more in the Property Buyers’ Guide to Currency.

Growth on all fronts

Florida’s housing market and economy are experiencing periods of strong growth. Across the state, the median price of a single-family home increased two per cent in the first quarter of 2019 compared to the same period last year and now stands at $253,000, according to Florida Realtors’ data. For condo-townhouses, this figure rose 3.1 per cent to $185,500.

“The state’s population continues to increase, our jobs outlook is strong and the economy is growing,” said Florida Realtors President Eric Sain in May. “In fact, Florida continues to be ranked as the second best state in the US to do business, according to the 2019 survey of CEOs from Chief Executive magazine.”

Only Texas grew more than Florida in terms of population last year, according to figures released by the US Census Bureau in April. Orlando and Tampa spearheaded this growth, the former by 61,000 and latter by 50,000, with both featuring in the top tier of the nation’s fastest growing metro areas.

For insider tips and tricks on getting the best deal on an American home, read our guide, How to Negotiate Abroad,

Property – something for everyone

A popular option for British buyers looking for a lettable vacation home near Disney is a single-family home on an older community in the Kissimmee or Davenport areas. Typical prices are in the mid-$300,000s. Condominiums (apartments) start from around $150,000 and townhouses from around $200,000. These communities, which will be in designated short-term rental zones, will have the more standard facilities, including clubhouse, pool(s), courts and a fitness centre. Examples include Windsor Hills, Bellavida, The Retreat, Paradise Palms, Solana, and Encantada.

By contrast, many of the newer hotel-style developments have more state-of-the-art leisure facilities. These normally include a choice of bars and restaurants, a water park even sports academies. Usually offering condos that can be managed by an on-site holiday agency, prices will be higher but so will rental returns. Examples include Margaritaville Resort Orlando and The Grove Resort & Spa in Four Corners area, Lake Buena Vista Resort & Spa on Resort Village Drive and the Balmoral at Waters Edge in Haines City.

Serious golfers, or anyone who prefer to be near or have views of a fairway, should consider developments around Reunion, Highlands Reserve or ChampionsGate.

If you would like to speak to a recommended agent from Orlando, you can meet them at the Your Overseas Home show in Chester on 8th June. See a video about the event and click here for your free tickets.