An American safari – the wildlife in your backyard

Buying a home in the USA, you might have more than the occasional badger or urban fox to liven up the neighbourhood. Here is what you might see in your garden, and how you might get it out again!

It’s when you’re driving along a country road in Florida and see a warning sign about crocodiles that you know you’re not in Oxfordshire any more. America has more than its fair share of exciting critters, but the good news is that they’re usually more frightened of you than the other way round. Usually….

It’s quite a thought that there are 130 lions on the loose in Florida!

In Africa, The Big Five that tourists like to see on safari are the lion, elephant, rhino, buffalo and the leopard. The USA has its own big five too:

Although they look as though they won’t be able to move very fast, once the bison starts galloping, it can reach speeds of up to 30mph, plus they can weigh anything up to 2,000 pounds – just shy of a ton! Although some people do still hunt bison, or raise them for meat, many of the USA’s herds are protected in National Parks. By the way, their real name is bison, not buffalo

The USA’s most feared predator it can run at 30 miles per hour and even if you can find a tree to climb, it better be a big one, standing on their hind legs a grizzly can reach 13 metres. Don’t be put off walking in the country though, there are well established procedures and protective devices to warn them off. Just be prepared. Indeed you can prepare yourself by reading this excellent guide to surviving encounters with bears.

Being nocturnal, it’s hard to spot cougars, or mountain lions, in the wild. They are most active at dawn and dusk, and tend to stick close to their prey, as they need to feed every couple of days. This means that wherever there are elk or deer, you may encounter a cougar. The cougar can reach speeds of up to 45 miles per hour and jump as high as a two-storey building. In Florida the cougar is known as the Florida panther. There are only about 130 in the wild, so you haven’t got much chance of seeing one. One the other hand, it’s quite a thought that there are 130 lions on the loose in Florida! 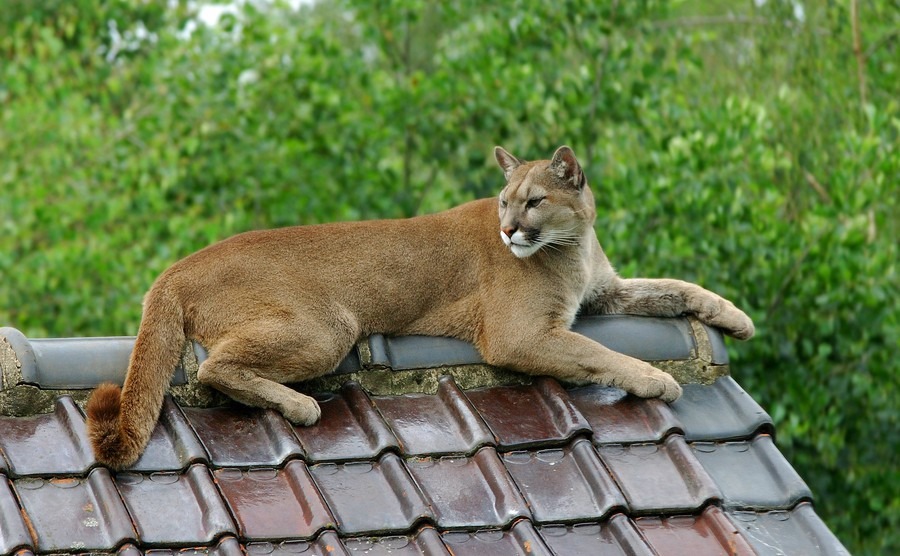 Just a mountain lion on the roof, nothing to worry about

Although not as colossal as their grizzly cousins, black bears still pack a punch, weighing in at around 800lbs, and standing at six feet tall. They can also hot foot it when the need arises, and can get up to around 35 miles per hour at full pelt.

Another huge animal calling the USA home is the moose, which weighs in at around half a ton and stands around 6-7 foot tall. Don’t worry too much about them – moose aren’t as skittish as British deer, but neither are they as deadly as British cattle. Just stay clear if they have young. 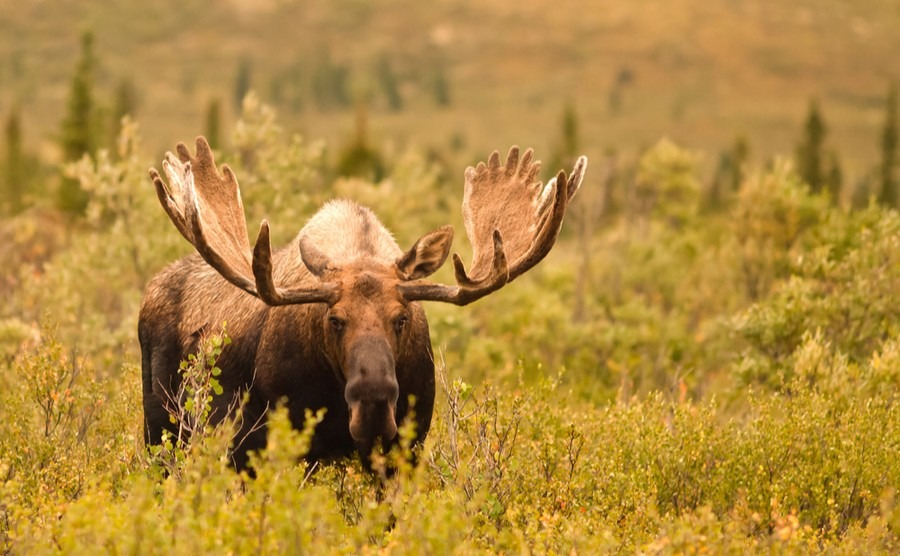 Trust us on this, you do not want a moose loose in your… villa

Protected your property, and you!

What do you do if the wildlife decides it wants to be your friend? For British people buying property in the USA, this could pose more of a problem than an urban fox or the leavings of next door’s cat. The staff at Yellowstone National Park have offered some helpful tips on escaping the attentions of bears and other fearsome American fauna:

It is highly unlikely that you will ever see a croc unless you are near a large, natural water source and countryside, but following some basic rules will keep them away

– Remove your bird feeders by 1st April.
– Keep rubbish in airtight containers, preferably in the garage, until collection day.
– Feed pets indoors.
– Nothing except vegetable matter on compost piles
– Put electric fences around fruit trees in gardens. Powerful electric fences.
– Never feed bears – you won’t be doing it any favours as it will learn bad habits; “a fed bear is a dead bear”.

Do NOT, wrestle it, pull it, try to tempt it away with food, or shoot it.

For Florida homeowners, alligators and crocodiles are more likely to want to say hi, or at least to take a dip in your pool. It is highly unlikely that you will ever see a croc unless you are near a large, natural water source and countryside, but following some basic rules will keep them away:

– Maintain strong fences.
– Keep pool covers on when not using your pool.
– Never feed them.
– Keep all food away, and keep outdoor barbecues clean.
– If an alligator or croc does appear, call animal control. Do NOT, wrestle it, pull it, try to tempt it away with food, or shoot it.