There’s a hint of winter in the air and the first dustings of snow have been reported in the Alps. The build-up to the new ski season is always an exciting time for winter sports fans, especially if you’re in the market to buy your own ski pad. If you’re unsure about which resort to focus on, here are some nuggets from the French Alps.

All eyes on Alpe d’Huez

Family favourite Alpe d’Huez will be buzzing this season, thanks to the prominent re-launch of its Club Med resort and being crowned Best European Ski Resort 2019. It’s the second time in two years Alpe d’Huez has been voted number one resort in the annual European Destinations of Excellence Network (EDEN) awards, a scheme created by the European Commission to promote Europe’s best tourism destinations. Said EDEN: “This resort is a perfect mix of fun, relaxation, sport; it is the favourite resort for families but also friends, couples, beginners and experienced skiers. Alpe d’Huez is also the best ski resort for guaranteed snow.” Another French resort ranked in the top ten was La Plagne, the fifth consecutive year it has made the list.

Still in Alpe d’Huez, December 2019 sees the opening of the new Club Med resort, following a massive $110 million renovation. A ski-in ski-out development with panoramic views, this landmark development offers a wide range of facilities geared towards families and is sure to be a boost to the resort.

French ski resorts aren’t cheap, but there are some safe and cost-effective ways to raise the money. Read more in our new guide: How to Pay for a French Property.

Alpe d’Huez, home to Europe’s longest ski run and 90 minutes from either Chambéry and Grenoble airports, or two hours from Geneva, is popular with both Brits and French people, including Parisians. The skiing and boarding are varied enough to appeal to all levels, and the resort values its family appeal. Its Grand Domaine ski area offers more than 250 kilometres of pistes, including 18 black trails, 28 red trails, 31 blue trails and 34 green trails. 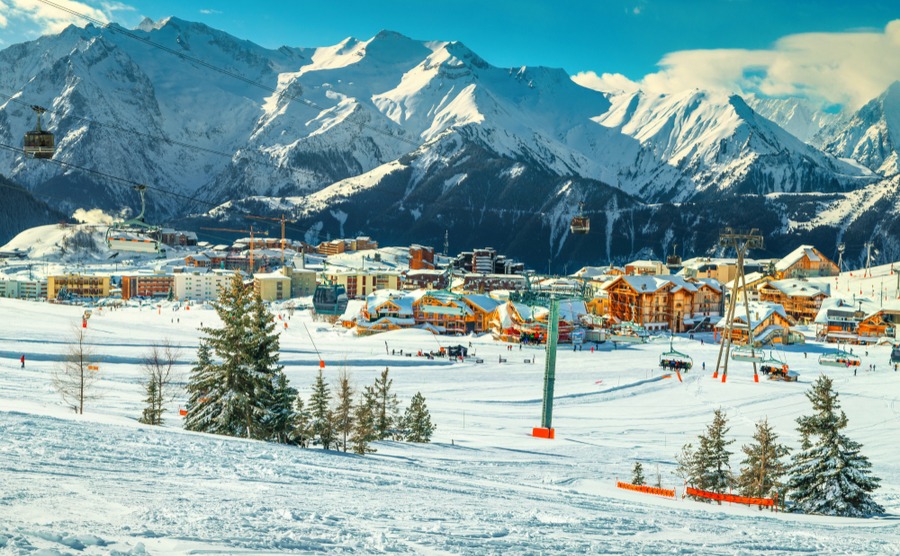 Alpe d’Huez has another feather in its cap after being crowned Best European Ski Resort 2019.

For the best UK flights options and largest choice of ski resorts within 75 minutes of an airport Geneva is hard to beat.

Geneva Airport is the gateway to the Haute-Savoie and Savoie regions, which includes a collection of traditional picture-postcard resorts, not to mention the internationally acclaimed Chamonix, itself just 70 minutes’ transfer. On the Swiss-French border, the international airport receives flights from every corner of the UK, including all six London airports, as well as destinations from around the world. Notable resorts within this catchment include Megève (70 minutes), La Clusaz (60 minutes), Combloux (60 minutes), Les Carroz d’Arâches (55 minutes), Les Gets (70 minutes), Samoëns (65 minutes) and St Gervais-les-Bains (55 minutes). If a short transfer is a priority for you, then why not start by exploring one or more of these property hotspots?

Find out how to get the best price for your French property with our free guide, How to Negotiate Abroad.

Morzine & Avoriaz – so good together!

The huge Portes du Soleil ski area, one of the largest in the world, could get even better with the construction of a proposed new lift. Morzine and Avoriaz are both key resorts in the Portes du Soleil and they could soon be linked by a multi-million-euro lift. A project called “Project Morzine-Avoriaz 2020” announced by the Morzine town hall would see a €35-million investment into a lift system running from the centre of Morzine straight up to Avoriaz. 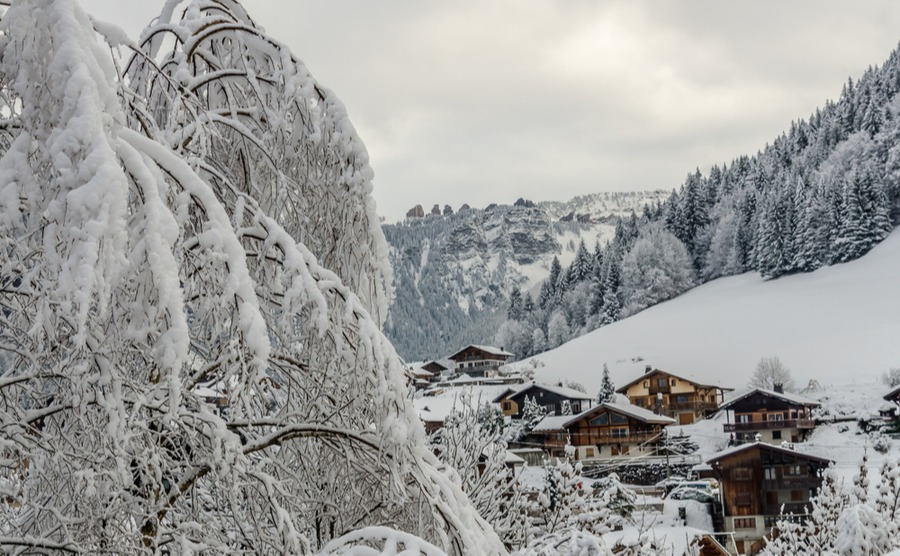 A new project will help further link Morzine and Avoriaz together.

Purpose-built and pedestrian-friendly Avoriaz has one of the best snow records in France, with an average snowfall of eight metres per season. It was voted best family resort and best snowboarding resort in Europe in the European Destinations of Excellence Network (EDEN) awards. Chátel is another major resort in the Portes du Soleil, one that has been the focus of a number of new developments in recent years.

One of the France’s largest builders and managers of ski résidences is this year introducing more flexible terms for buyers of its leaseback property, in a bid to adapt to the requirements of today’s ski homeowners. Terrésens has developed a scheme that lets owners enjoy their second homes for up to six months a year whilst still benefitting from rental-pool income and a VAT refund when they purchase their property.

Owners of leaseback ski properties, which are leased back to an operator in return for a fixed rental return, typically choose between two and six weeks personal use a year. At the same time, in some résidences, Terrésens has introduced a scheme that allows selected apartments to be sub-divided and let as more than one unit. This means a three-bedroom apartment could either be rented out in its entirety, or as one ‘junior suite’ bedroom and another ‘master suite’ with a kitchen, lounge and beds for four people.

The opening of a new ski area has put lesser known La Rosière on the map and is already proving to be a major boost for the resort. Located in the Savoie and historically overlooked in favour of the region’s larger resorts, La Rosière is looking forward to its first full season with its new Mont-Valaisan ski area. The £13.5million project opened last December and includes two new lifts reaching an altitude of 2,800 metres, five new red runs and a new ‘freeride’ area.

The spotlight’s on La Rosière following the opening of a new ski area.

Mont-Valaisan has already triggered investment into the resort, including major hotels. The swanky Hyatt Centric opened in December 2017, the Alparena in January 2018, while developer MGM are soon to open its Alpen Lodge and December 2020 will see the launch of an 800-bed Club Med resort. On the Italian-French border, La Rosière offers skiers the chance to ski into Italy for the day, ideally for a nice lunch!