The most beautiful villages in France 2022

There are so many beautiful villages in France! However, an association called “Les Plus Beaux Villages de France” holds a particular cachet for any village included in its annual list. We look at four stunning villages that have been voted onto the 2022 list.

When 66 mayors agreed with Charles Ceyrac, the idea took shape in early 1982. Now there are 168 villages on the list with a few more being added each year. This year, 2022 marks the association’s 40th anniversary. Whilst many villages make a bid to be included, not all are successful, however beautiful they may deem themselves to be.

The criteria each village must meet are threefold:

Four villages have, just last month, been added to the list: Beaulieu-sur-Dordogne in the Correze, Martel in the Lot, Rocamadour in the Lot and Bergheim in the Haut-Rhin.

Whilst it is extremely difficult to choose any particular village over another – and you will no doubt have your own favourites – we have picked 4 of these stunning villages, all of which you will be tempted to visit or even buy a property in.

Bergheim is an absolutely delightful village located in the Haut Rhin department of the Alsace, just north of the equally pretty town of Colmar. Newly added to the list, it joins Equisheim, Riquewihr and Hunawihr, all also in the Alsace.

Its name means “mountain village” in German. Largely influenced by Germany due to its proximity to the border, Bergheim is enclosed by its original 14th century fortified walls. Entering this charming village through the arched doorway, it is impossible not to be charmed by its cobbled streets and brightly painted half timber framed houses. There is a most attractive square, the Place d’Arme, from which one can happily wander around the village and perhaps take in a little wine tasting. It thrives on its wine industry and, of course, tourism.

It has a pleasant oceanic climate with warm summers and cold, although not freezing, winters. It is largely sheltered from any strong winds.

The closest airport for Bergheim and the Alsace region generally is Basel-Mulhouse-Freiberg, which has regular flights to and from the UK.

There are some wonderful properties around Bergheim although, as with many of these tiny places, finding somewhere in the village itself may be a challenge. Pricewise, this is not by any means the cheapest area of France, neither is it the most expensive. You will need a budget of around €300,000 to find a renovated 2-3 bedroom house with garden. 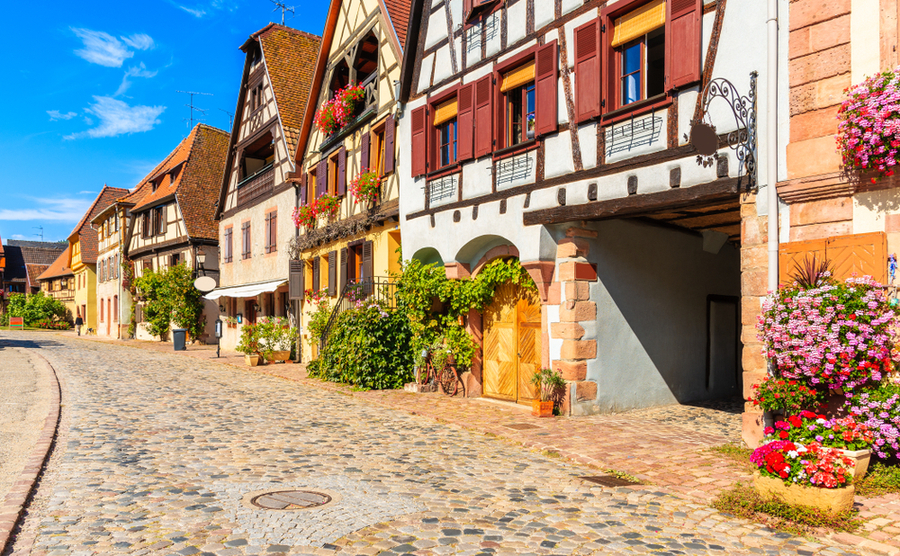 Bergheim is enclosed by its original 14th century fortified walls.

Rocamadour in the Lot department is absolutely breathtaking! It is a UNESCO World Heritage site and is known as a religious site on the pilgrimage route to Santiago de Compostela. It is said to be the most visited place in the country after the Mont Saint-Michel.

Its setting is really quite dramatic as it is located on the side of a cliff. You can view the whole village from nearby L’Hospitalet before venturing in to discover its charms. There is one small street with beautiful medieval houses on each side and from here you can see the steps of the Grand Escalier, which lead to a small square. With plenty of charming cafes, bars and restaurants, this is the perfect place to watch the world go by.

The climate is very pleasant here with a good deal of sunshine for much of the year and reasonably temperate winters.

You can fly either to Brive, Bergerac or Toulouse from the UK to reach Rocamadour.

Property prices are average here and there is a good choice of either old renovated properties or new villas in the surrounding area, although it may be difficult to find a house in the actual village. A budget of around €250,000 would find you a small house with garden. 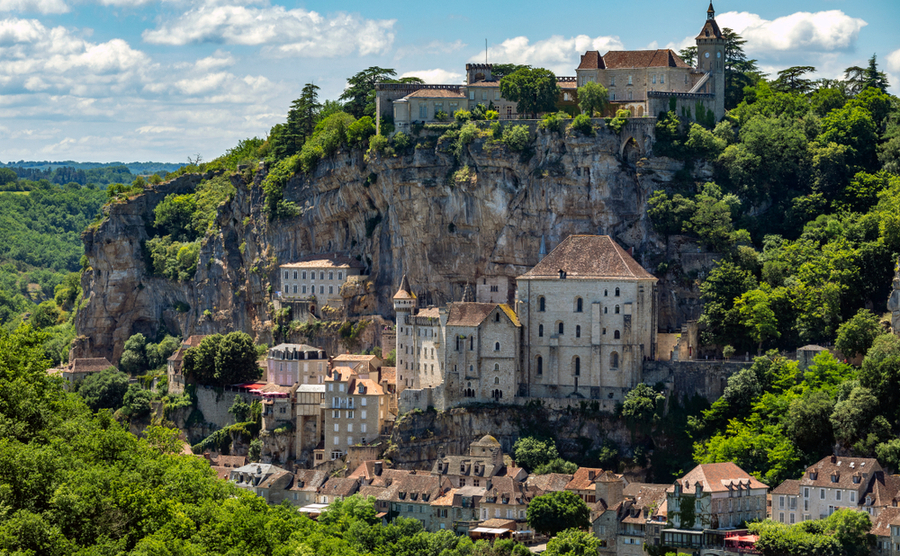 This is a stunning, 14th century medieval village located on the shores of Lake Geneva in the Auvergne-Rhone-Alpes. The centre of this remarkable village has the “Garden of Five Senses”: visitors can touch, smell and sometimes even taste the array of plants and flowers here. Indeed, it is not only on the list of the most beautiful villages in France, it is also classified as a “village fleuri” due to its abundance of flowers lining the little streets.

There are a few lovely little restaurants here overlooking the lake. The climate is seasonal and very fresh.

Property prices are a little higher than average here. A budget of around €350,000 would buy you a 3 bedroom house with garden.

To reach Yvoire from the UK, you should fly to Geneva or Lyon. It is around a 50 minute drive from Geneva and a 2 hour drive from Lyon. 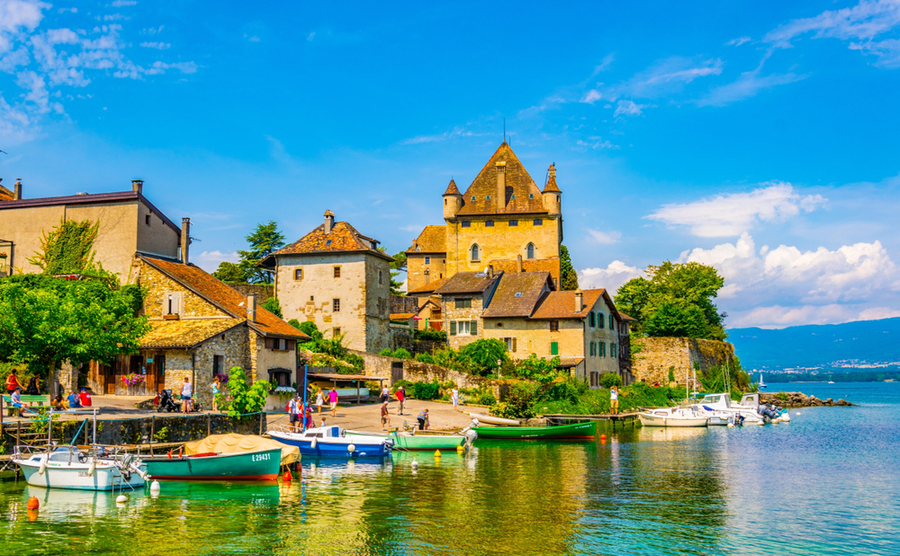 A stunning, 14th century medieval village located on the shores of Lake Geneva.

Barfleur is one of the prettiest villages in the department of Manche in Normandy, filled with well-kept stone houses, tiny roads and also some super beaches. It is also pretty close to the UK.

A delight for sea food lovers, the village is known for its mussels which are harvested there. There is a delightful harbour, which in medieval times was the largest in Normandy. What could be more pleasant than sitting with a coffee and watching the little boats bobbing on the harbour?

The best way to get to Barfleur is by ferry from Poole to Cherbourg. It is then around a 30 minute drive from there.

The climate is similar to the south of England here, with perhaps a little more sunshine in the summer months.

This is a very popular village with both the British and French. Try looking at nearby villages for property as places don’t come up in the actual village very often. A budget of around €300,000 should find you a small house with garden. 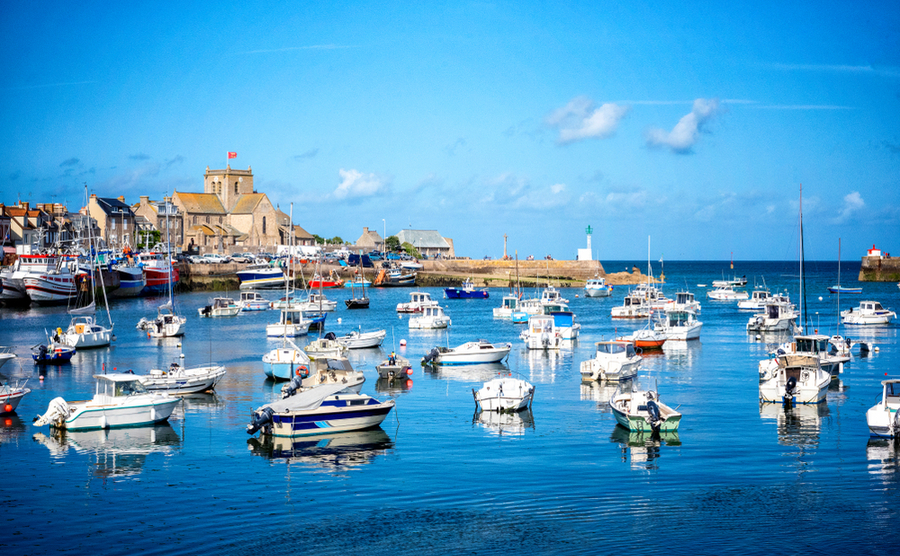 Barfleur is one of the prettiest villages in the department of Manche in Normandy.

What soon becomes apparent on visiting any of these villages is that they have all preserved their history so remarkably well; close your eyes and you have been transported back to medieval times. Enjoy!