Running a guesthouse in southern France

One lunchtime after a large glass of wine, Dr Phill Edwards suggested to his partner that they sold up in Clapham and rented whilst searching the perfect location for their dream guest house business.

And so their journey began. The dream of running a guest house for Phill and Steve had been in planning since 2010. Long fuelled by their extensive travels and after consideration of several different countries,they decided here was the perfect location, in part due to the proximity of France to family and friends back in the UK. They sold their property in London to have cash ready and available, fortunately also finding it easy to get a mortgage. In readiness for their adventure, they rented another flat, so that when they found their dream property they were ready and able to immediately take the leap. They started off by basing themselves in Montpellier, an area which greatly appealed to them and started their search within the surrounding catchment area. After a somewhat false start employing a couple of individuals who didn’t seem to listen to their requirements (which as a “large piece of land with something liveable on it” shouldn’t have been too difficult), let alone find any suitable properties, they decided they would need a change of strategy.

Find out how you too could afford a life in France with the information and guidance in your free ‘How to Pay for It’ Guide.

Luckily at this point they were able to take their time enjoying their surroundings, but upon getting notice that the property they were renting was being sold, they knew they now needed to act quickly. 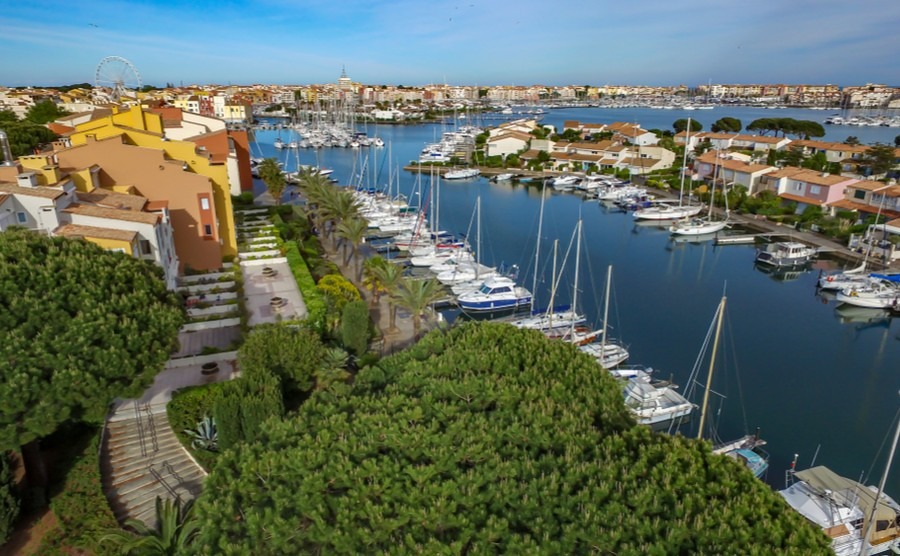 It’s easy to see why Phill and his partner full in love with the area of Marseillan.

Having previously placed an offer on one property in Agde and having to sadly withdraw due finding out some worrying information about potential flooding, they returned one day to the town, where a local estate agent invited them to discuss their requirements. Apparently she had just the thing for them in Marseillan! Being an area that was known to them, and which they had liked “for its quirkiness and the fact that there is always something new to see”, they jumped at the chance. Four days later, they travelled back to Marseillan to view the property full of hope but, after all, it was early days. A reasonably sized villa set within a large piece of land, with only minor alterations required, it certainly had scope for their guesthouse business. However, it was 2km out of town, something that initially concerned them. That said, the location wasn’t without advantages, as it was tranquil but still within easy reach of the town. After thinking through further questions they had, they revisited the next day. After all the questions were answered to their satisfaction, they really felt like this was the place for them so put in an offer. Happily this was accepted a day later and the house was theirs.

We love Marseillan for its quirkiness and the fact that there is always something new to see.

Approximately 25 minutes from Beziers Cap D’Agde Airport and 15 minutes from the local TGV station by car or taxi, Marseillan is a genuine Langedoc village of fishermen and wine-growers, wonderfully close to Cap d’Agde and the Mediterranean Sea. The beauty of Marseillan lies in the unspoilt port, the picturesque old town surrounded by remote countryside and the close proximity to the sea. The village is busy in the summer months, the port more at all times, and the thriving shops, restaurants as well as the obligatory weekly market attract many visitors and locals alike. There is a huge UK and German expat population who have settled here and it’s not very hard to see why. It’s like the St Tropez of the days before it became cost prohibitive to the majority of us to live or party in. 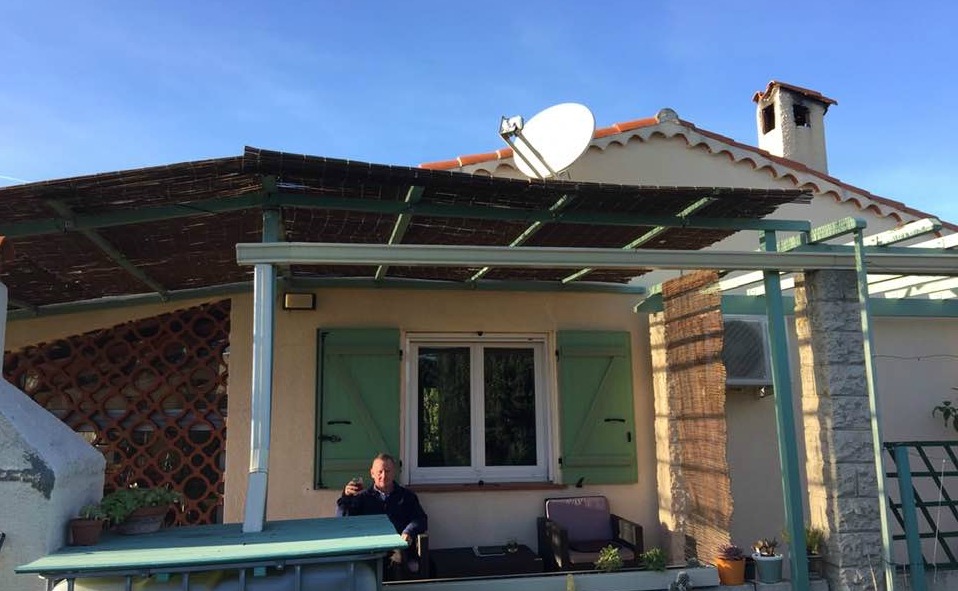 The terrace of their guesthouse.

“Aux Quatre Vents” is in the perfect mid-way situation of tranquil surroundings but close enough to the town and sea. From this idyllic location, Phill and Steve run two guest rooms within their picturesque guesthouse – Cloaca Room and Africa Room (named in homage to their extensive travels of South Africa). Renovated to their high standards and requirements, and having been extensive re-wired – almost a pre-requisite for any French purchase – it is here that they have hosted many appreciative and delighted guests. The region is well known particularly to the French clientele who like to party within this area. As a result the majority of their guests are French. Typically they come to stay requiring breakfast only and stay out all day – or occasionally others stay out all night. And as Phill has confidence in his French, he is very happy to accommodate them.

If you are ready to buy in France within the next few months, but you just want a bit more advice, call our friendly France Resource Team on +44(0)20 7898 0549 or email France@propertyguides.com.

One of the big surprises or joys of their new life in France is the wildlife – frogs in fact to be precise. If you’ve never heard a frog chorus you really haven’t lived and Phill speaks very fondly of his frog paradise, even having nicknamed them “deck frog” “patio frog” and so on…Another reason to give our green friends big thanks is their use as a natural anti mosquito weapon, eating the mosquito larvae.

The people are friendly to a fault and they have been accepted easily as part of the community. Of course, the fact that they speak French and have observed the French customs of greeting everyone when you walk into shops and restaurants has undoubtedly endeared them to the locals. The mayor in their town runs an Anglophone society running activities every 3 months where you can meet new people for when you do wish to speak English and they have settled here both well and easily.

Preparing for the move

As part of preparation for the move Phill and Steve visited the Your Overseas Home show, which they say was invaluable. This exhibition offers the chance to meet many service providers for all aspects of your new life abroad, including property agents, banking services (including currency transfer) and lawyers. “We met several partners there, and from the banking perspective certainly it was very useful. We had a bank account set up within weeks”.

For currency exchange they use and swear by Smart Currency, whom they say that since they first spoke to they have absolute confidence in and would never use anyone else. Using a limit order to secure good rates (when the rate hits the level you have requested to set it at, the contract is booked) they they transferred the bulk of their money from the UK at a time when the markets were good and having the time and space to transfer as and when the rate hit the levels they had pre-set.

Phill and Steve have totally embraced their new life in France. Their business has been up and running at full pelt since 2017, having initially taken some guests following the initial renovations in 2016 and they now enjoy busy summer seasons annually. They love the climate, they truly appreciate the people of their area and they specifically mention how good the health service is in France. “It may be complicated to navigate and get into at first but once you have everything in place, it’s a great service”.

Don’t miss your free tickets to Your Overseas Home on 7th March in London, as they do go fast. The event is specially designed for serious buyers only, giving you the chance to connect with experts from all aspects of moving to France, gathered under one roof.

Brexit which was not a concern to them at the time they started their search, however upon hearing the news a year after their initial move did worry them somewhat particularly around Phill’s other work endeavours within IT which often takes him abroad. And like many of us living out here the restriction it places on his freedom of movement is a sore subject and one he is not happy about.

As ever, they do admit that the administrative tasks required for moving here permanently has taken time and some patience, but finally they have everything totally in place and running smoothly. They also even have friends who moved into the area inspired by the story (and blog) that Phill wrote documenting their journey.

The weather of course is great, we have 300 days of sunshine and we don’t regret it for one moment

When asked about their new life in France, their response is simple – filled with joy and gratitude.  “The weather of course is great, we have 300 days of sunshine and we don’t regret it for one moment – best thing we ever did! If you choose to make the move, do ensure you make the attempt to integrate with the locals by following usual French etiquette (using greetings when entering shops) and communicating with people warmly and it will all go well.  Don’t be concerned if your French isn’t perfect or you mess up in anyway, people will always understand if you’re being polite and well mannered”.  And the frogs, of course don’t forget about the frogs…