France is proud of a recorded history that goes right back to cave paintings from over 30,000 years ago, and continues through wars, revolutions and more peaceful innovations and cultural events to memories still shared by British, Americans and many others today.

When you buy a home in France you become intimately involved in it all. If you wish, you can research the people who lived in your home and the events that have lit up – often literally! – your neighbourhood. Here are some ways to uncover and immerse yourself in the fascinating subject of local history in France.

For history lovers, there is no better place to transport yourself through an unforgettable journey back in time, with the first written history records of France dating back to the Iron age. Indeed, stone tools discovered in the country in 2009 allude to pre-human ancestors present in France over 1.6 million years ago.

France has a rich and diverse heritage, influencing other countries and cultures throughout the world. The country is immensely proud of its history and puts in great efforts to preserve and showcase it, providing you with the perfect opportunity to lose yourself in local history in France. 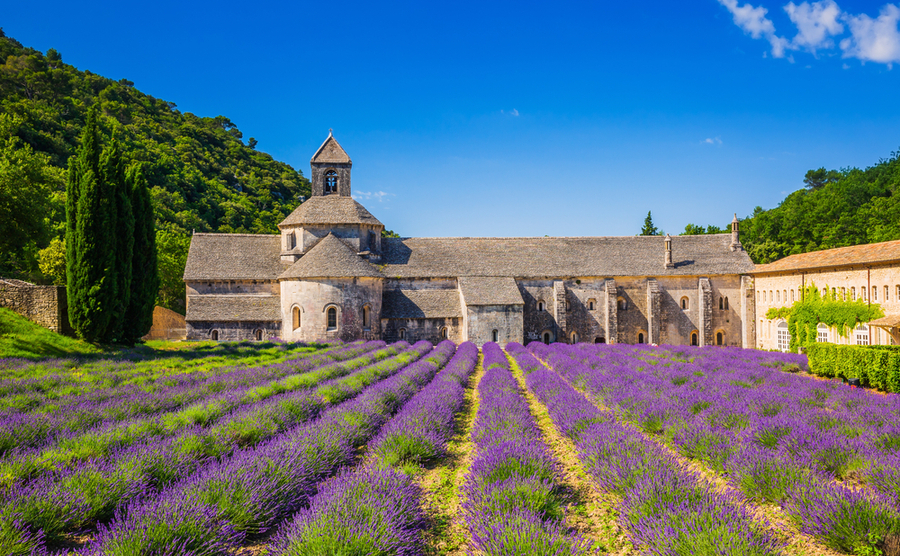 Your own village and property

To whet your appetite, why not start by looking into the history of your own village or property? The good news is, the best way to do this involves getting out and about and interacting with people in the local area.

Speak to your neighbours. If you live in a small village, it is likely that many inhabitants have been born and bred there or their families have lived in the area for years and years. Not only does this give you an opportunity to introduce yourself but you will find that people in the area will love and appreciate your curiosity of local history in France.

Your Mairie (town hall) is an invaluable resource. As well as having the “Carte Cadastrale”, a detailed hand drawn map of every commune, they undoubtedly hold records and photos of your village as it was in days gone by. You may even be lucky enough to find that they possess photos of your specific house/plot as it was then. They will also direct you to other local resources, as well as perhaps local history groups and societies in the area.

As ever, the internet is a great tool for research. France has census records dating back to 1826 and continuing every five years. You’ll find your area by searching for “archives départementales + the department” you’re in. Census records tend to be archived by location rather than name, which makes it easier for people researcing an area than researching their ancestors, for example.

If you are reserching ancestors or particular people, look up the website filae.com.

Old maps provide valuable clues and the “Maison de la Presse” (tabac or newspaper shop) often sells books about the history of the local area. YOu can also find them via Gallica. You’ll find many more tips and useful advice on the excelent website My French Roots.

People in the area will love and appreciate your curiosity of local history in France.

The biggest clues to the history and provenance of your property may be contained within the property itself. Your house may have date stamp. The style and design, the thickness of walls or types of windows will all offer clues to when and how your property was built.

Preservation of natural and cultural heritage

France proudly protects and preserves its natural and cultural heritage, as well as celebrating its range of biodiversity. When it comes to local history, accessibility opportunities to historic sites are plentiful, whether it’s a fortified town, chateau, gardens or religious monument.

Fondation Patrimoine is the French equivalent of the National Trust. It helps owners and businesses restore buildings and heritage sites, both providing job opportunities and improving accessibility. This is to encourage discovery, connection and engagement with local history in France. Founded in 1996, it has since grown into an unstoppable force, with 80% of its projects located in rural areas in accordance with the Foundation’s mission and objectives. The aim to preserve the inheritance of France’s heritage and culture to pass onto future generations, as well as developing the local economy.

There are numerous ways to meet other people interested in French history, including The French History Society.

Meet Up groups are another way to find fellow history buffs in your local area, or to create your own.

Possibly the nearest equivalent in France to “English Heritage” is UNESCO. France is a founding member and offers the fifth largest number of UNESCO world heritage sites. The country is a leading tourist destination having captured the attention and imagination of around 200 million international visitors every year. UNESCO sites include castles, cathedrals, grottos, islands, parks and gardens, so there truly is something for all interests and ages.

France’s history impacts directly on its culture, tourism, national holidays and indeed every part of life here, so what are you waiting for? Get out there and get involved in local history in France. Along the way, I can guarantee you some magnificent sights, fascinating fact finding and even some new friends!

The influence of French history on life in France

The people who lived in your new neighbourhood may have influenced art, food and dance the world over. French history is a colourful and rich tapestry, illustrating why France is such a power player within Europe. Its impact on culture, not only within the country but throughout the world, is huge.

It is no surprise, from the history leading up to the French Revolution, that the French place so much importance on their motto of “Liberté, Égalité, Fraternité”. Until the revolution, ‘normal people’ were very much kept in their place, whether by the Romans and Franks in Ancient times, the tumultuous and bloody battle times of the Middle Ages, or by the extraordinary decadence and extravagance under the Monarchy during the Grand Siècle. 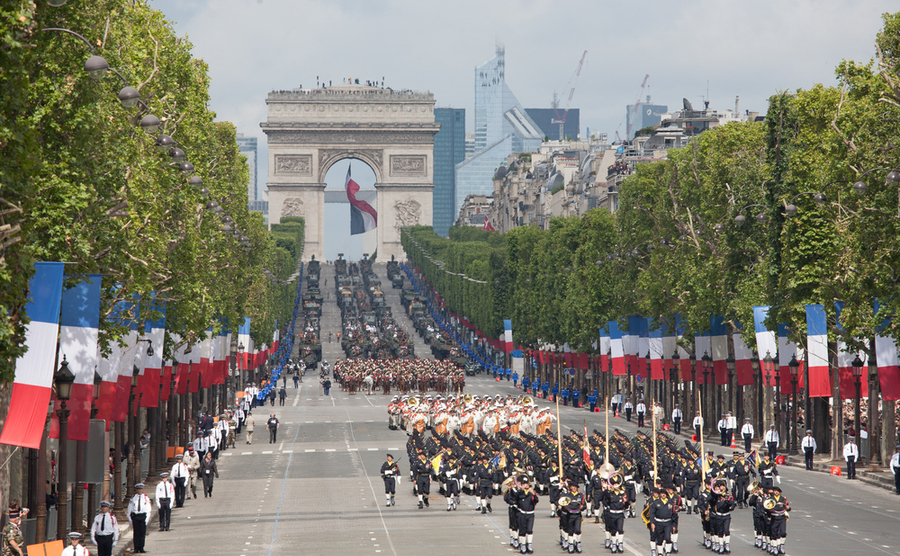 The day is marked in towns and villages throughout France. What has been reported as the biggest and oldest military parade in Europe is held on the Champs-Élysées in Paris in front of the President of the Republique with French officials, foreign guests and dignitaries in attendance. And of course, is always followed by festivities, merriment, dancing and fireworks!

Whilst English speaking countries often refer to this as “Bastille Day”, the French certainly do not, referring to it most commonly as “Le 14 Juillet” or “Fête Nationale”.

The origins of July 14

During the 18th Century, in response to the extravagance of the Grand Siècle before it, backlash was delivered swiftly. Increasing importance was placed on modern thought, enlightenment, and Revolution in France. Scholars and thinkers started to demand equal rights, free trade and liberalism. Writers and philosophers openly criticised the “old Regime” of the French Political system and clergy and nobility in France became an obvious target.

The people of Paris began to protest in droves against disparity, driven and roused on by a song which would later become the French National Anthem (La Marseillaise), culminating in the French Revolution of July 14 1789, with the storming of La Bastille. With the decapitation of Louis XVI at what is now known as the Place de La Concorde, the finite end of the French Monarchy was sealed, and in 1792 the First Republic of France was proclaimed loud and proud for and by the people.

The French Revolution is widely regarded as a tremendously important event in modern international history, due to the international impact it had then and continues to have on society and thought today. This seeps down into local history in France with other wonderful stories of strength and people power during this time in towns and villages all across France.

All of this feeds into the modern day – and may explain why the French are so good at protesting, striking and voicing their loud disapproval/discontent against anything they consider not to be ‘right’ or “moral”.

France and the UK have a long history of a somewhat complicated relationship. We have shared wars, Kings and collaboration over crossing the Channel. A huge 45% of our language is derived from French and 12 million people visit France regularly on holiday, with hundreds of thousands of us having chosen to set up home here! And whilst we have not always seen eye to eye, when the chips were down in the battles of two world wars, there was no question of standing steadfastly together, side by side.

When uncovering local history of France, this is one of the most interesting periods to delve into – the role that people from your local village or commune played during the First or Second World Wars. Many villages are still inhabited by people who served or lived through WWII and their stories are both horrifying and fascinating in equal measure. We are privileged to still have the opportunity to speak to some of them, as the chance to get first hand knowledge of these times will not last forever. 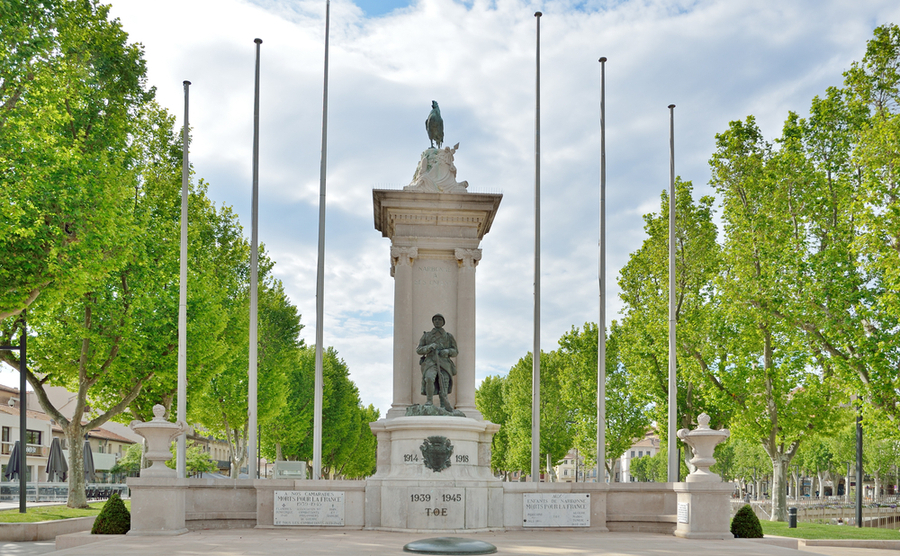