While the much of the French property market lags behind, the Parisian market has begun a strong recovery, with all of its boroughs now rising in price. With the Olympics on the way and Macron renewing optimism, is now the time to buy?

Property prices in Paris are shooting up by up to 10%, according to one leading French property website. The report from Seloger was the first in recent times to show an increase in all of the city’s arrondissements (boroughs), with price rises of between 2% and 10% per arrondissements and 6% on average across the city.

The biggest increase in prices was in the mid-range boroughs in the north of the city, with the 9th, 10th, 17th and 18th arrondissement all seeing price rises of above 7%

Parisian homes now average €9,100 per square metre, slightly cheaper compared to London where prices vary between £6,500 and £11,500 (€7,300 – €13,000). The western side of Paris is the priciest, with per-square-metre-values in the 4th, 5th, 6th, 7th, 8th and 11th arrondissements all exceeding €10,000 per square metre. It is in these areas that you find the beautiful, trendy Marais, the Latin Quarter, St. Germain, the Eiffel Tower and Champs Elysees and the Canal Saint-Martin.

The lower prices are in the east end of the city, including the 19th and 20th arrondissements, which are home to two of Paris’s largest parks and the several museums, including the Science Museum, and the Paris Philharmonic. You will stay pay around €7,000 per square metre (£6,200) here, which equates to around €250,000 for a studio and €450,000 for a two-bedroom flat. Comparing this with the rest of France, where prices average €3,775 per square metre, Parisian prices are nearly three times higher. The website adds that buyers in Paris are actually paying around 2.7% below average asking prices. 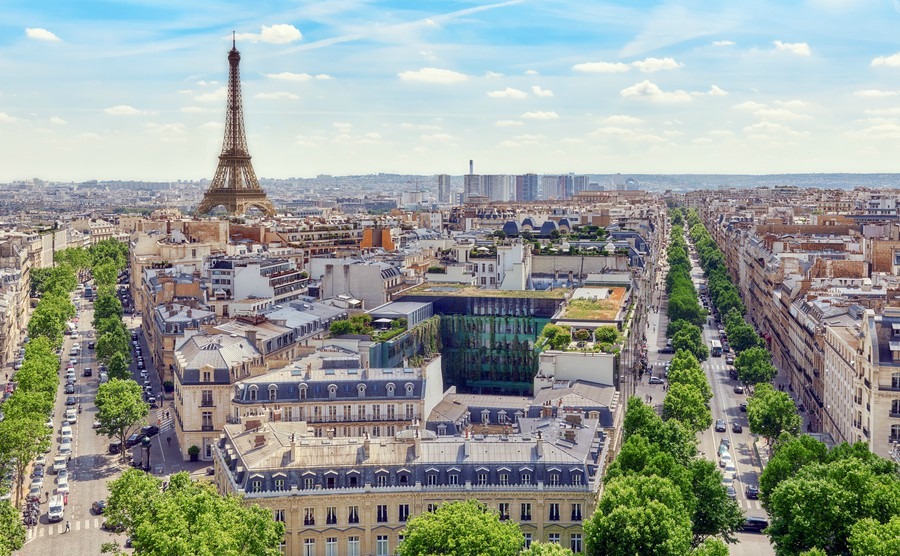 The biggest increase in prices was in the mid-range boroughs in the north of the city, with the 9th, 10th, 17th and 18th arrondissement all seeing price rises of above 7%. These are the areas where most Parisians live, they are also where most British arrive, with the Gare du Nord sitting in the 9th. This area is due for major renovation. The 18th is where so many British artists have tried to make it as artists over the centuries, in Montmartre, while the 17th is a little less arty but does have those things that make life in Paris so wonderful, the amazing local shops and street markets.

As we wait to see how the Presidency of Macron shakes up the French property market, the latest official data says that 85% of Parisian homes are primary residences, 6% are second homes and 8% are vacant. That’s a lot of empty homes that could hit the market if, as many expect, the popularity of Paris as a property investment location improves with the new business-friendly approach of President Macron and the awarding of the 2024 Olympics.