Our love affair with the Dordogne

The Dordogne is a truly beautiful department located in the Nouvelle Aquitaine in the south west of France. It has long been one of the most popular areas for many British people to visit and settle in as it has so much to offer: beautiful countryside, stunning towns and villages, medieval castles, prehistoric caves, a great climate, rich and varied food, pretty timber houses. The list goes on and on!

It is worth for a moment mentioning the fascinating history in this area. The Hundred Years’ War, ending with the Battle of Castillon, sealed victory for the French who expelled the English from their land, although the Wars of Religion did follow on. Perhaps because it once belonged to the English, albeit a very long time ago, the area has long been at the top of the list of the most favourite French regions?

Find homes in Dordogne via our property portal.

The Dordogne also gives British people a feeling of nostalgia, reminding us of home as it was years ago: unspoilt villages, slower pace of life, friendly local people, beautiful rolling landscapes. It has even been dubbed “Dordogneshire” given its popularity with British buyers. It was the first area of France to become filled with British second home owners some 25 years or so ago and its appeal hasn’t diminished today. It even has its own English language monthly newspaper “The News”, which is published from its prefecture in Perigueux but covers news from the whole of the country.

The word Dordogne actually means two different things: the department was named after the Dordogne river which runs through it, but is now often referred to as the whole area which, incidentally, the French call “Perigord”, divided into 4 regions: Perigord vert, blanc, pourpre and noir.

The Perigord noir in the south east of the department is home to the wonderful town of Sarlat and fabulous smaller towns such as Beynac (remember the heart warming film “Chocolat” starring Juliette Binoche and Johnny Depp? It was filmed in Beynac!) and Castelnaud. As well as picturesque villages like Domme and Laroque Gageac, the latter being a truly amazing settlement on the north bank of the River Dordogne, with steep cliffs providing a stunning backdrop. It looks like something out of a fairytale with its honey coloured houses and fine renaissance buildings.

The famous grotto at Lascaux has the world’s best known prehistoric cave paintings. Although the actual UNESCO world heritage site was closed in the 1960s due to damage from years of tourist visits. It’s still possible to visit a fantastic reproduction of the Lascaux caves, open since December 2016. 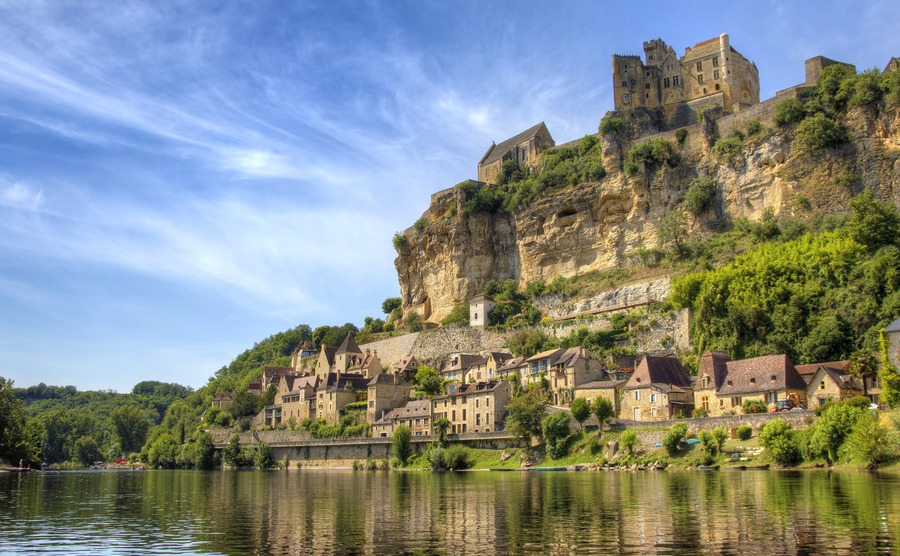 The Perigord pourpre is the area around Bergerac, famous for its wonderful wines. The Perigord vert lies in the north of the department and here you will find some beautiful villages and farms.

Brantome is an attractive town in the north of the Dordogne, occasionally known as the “Venice of France”. It is worth checking out for its medieval and renaissance buildings, plus its Benedictine Abbey at the edge of the river, and is classified as one of “les plus beaux detours” in France because of its beauty.

The area as a whole is known not only for its wonderful landscapes but its historic monuments. It is filled with more medieval castles, churches and grottos than any other area of France.

When it comes to cuisine, the general code is rich and plentiful in this region

When it comes to cuisine, the general code is rich and plentiful in this region, much like its soil. Periqueux has been famous for its duck and goose markets since medieval times and of course this is the land of the truffle. Truffles are an old fungi growing underground around the roots of oak trees, which need to be dug (or sniffed!) out by a sniffer pig or dog. Other culinary traditions around here include chestnuts, soft fruits and foie gras.

Although property prices have risen over the years here, there are still some incredible bargains to be found. Over the past year or so, prices have remained stable. This super three-bedroom house is for sale for a little over £100,000 in the popular village of Eymet. The village even has its own cricket team, established by a group of British expats back in 1983 who missed this quintessentially English sport! For good investment, take a look around the capital Periqueux, which benefits from strong tourism its central location.

Average house prices in towns like Perigueux and Bergerac and larger villages such as Sarlat are now around €1450 per square metre. 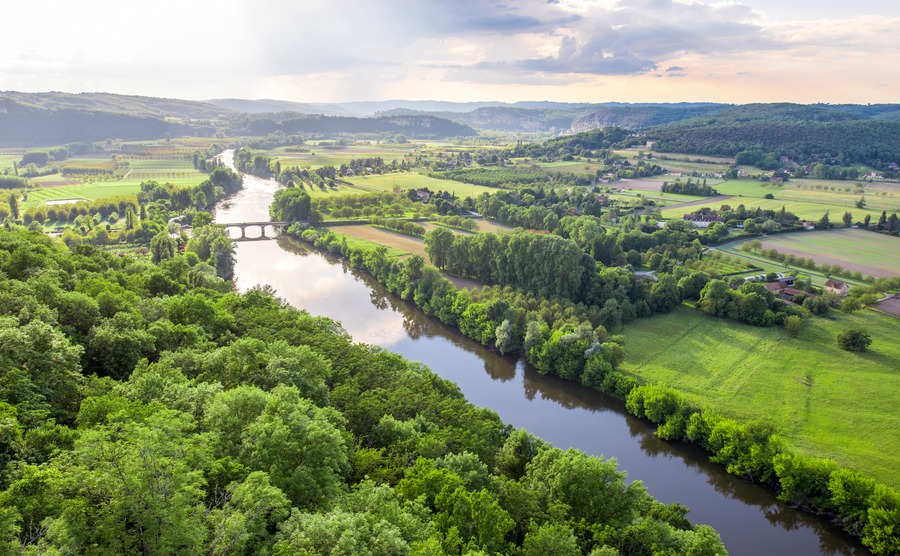 The area around the southwest of the region near Bergerac probably has the best climate. The whole area is blessed with hot summers, as well as its fair share of rainfall in spring and autumn. This is also the most expensive part when it comes to buying property due to its close proximity to the airport at Bergerac and the town itself with its quaint medieval quarter.

If you are heading off for a viewing trip to the Dordogne to see some properties and sample some wine, check out the Viewing Trip guide to help you get organised.

As for transport links, both Bordeaux and Bergerac airports have regular flights to and from the UK and elsewhere in Europe. There’s also Brive airport, with flights to London Stansted. There is a quick TGV link from Bordeaux up to Paris, or south to Avignon. France’s fine motorway network means you can easily drive down to the Dordogne on the N10 from the coast.

The fact that this area remains so popular with British people can only be seen as a bonus. The French welcome us with open arms, as it’s often the B

In short, the Dordogne is one of those areas of France that is easy to fall in love with. You may well find, once you have explored it, that you never want to leave.