France leads the way in making businesses socially responsible. Now new food labelling will help the French shopper to make healthy choices. Do the public really care about that anyway though, in the world’s most delicious nation?

First came the ban on plastic bags being given out in supermarkets. Then France became the first country to outlaw throwing away good food. Now a new scheme is revamping food labelling in some of the leading supermarkets.

Several new labelling styles are being trialled in four regions across France, starting this week in Carrefour Market, Casino and Simply Market supermarkets. The idea is to inform the consumer in far greater detail about the goodness in 1,200 different foods, with information on their fat and sugar content, health and calorific values. There will also be an indication of how much of any recommended vitamins are in each food for daily consumption. One system, “Nutri-Score”, uses five colours to rank the food from good to bad. The “Sens” system uses a mixture of colours and logos to show how much of the food you can eat healthily. The “Nutri-Repère” is like the UK’s system, with fat, sugar and salt content displayed along with how many calories it contains. 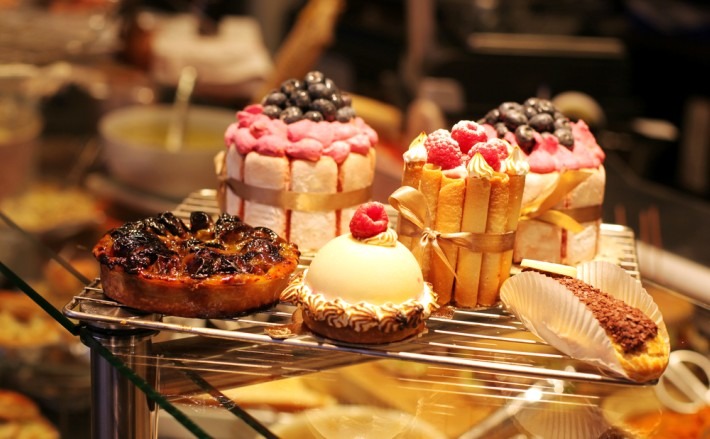 French cakes in Paris. But how healthy are they?

There has always been admiration from the Brits for the way the French shop, cook and eat. The French are traditionally proud of their culinary skills and most French people shop with health and goodness in mind, preferring to cook from scratch than to buy a ready-made meal. The French see eating more as an art form than merely a necessity. It was Moliere who coined the phrase “Il faut vivre pour manger, non pas manger pour vivre” (One should live to eat, not eat to live).

The French are more laid back generally, more than happy to eat delightful meals made from fresh ingredients.

Many British people also admire how slim French people stay, despite most of them, from our own observation, still believing that a little of what you fancy does you good. The French are certainly less obsessed by dieting, not worrying about eating certain foods such as butter, which we are sometimes told is bad for us, or relying on the latest fad on what may be healthy or not. They are more laid back generally, more than happy to eat delightful meals made from fresh ingredients.

It remains to be seen whether this pilot food labelling scheme will prove popular. Meanwhile we adhere to Moliere’s view: eating should be an enjoyable social occasion for the whole family.