My magical new village life in the Charente

If you’re thinking of making that leap of moving permanently to France and think you already know what to expect, think again. Village life in France may well surprise you with the joy and beauty it has to offer. Every day is a new adventure – a beautiful, colourful, joyful and glorious one. Enjoy every single minute of it.

When I first voiced my intention at 45 (alone and only with a small scruffy useless dog for company) to move permanently to France, most people were horrified. The questions came thick and fast but the main one being why? At the time, my answers were fairly one-dimensional and mainly revolved around an economic necessity to find a better life balance and possibly just an attempt at one final adventurous hurrah. Having been here for some time now I can give so much more weight to those answers, the joys that I hoped would find and those I hadn’t even considered. I hope that you find and appreciate them too.

The people and community spirit of village life in France

Wow – the people. Now this may well differ from town to village and region to region of course, but I have never before met people who greet you without fail whether they know you or not. People here seem to genuinely look after and out for each other. They genuinely want to help without expecting anything in return. My village is honestly full of the type of people that I only used to dare dream about. I don’t even have to ask and people just queue up to help. In casual conversation I’ve mentioned running out of gas (to cook with) or being unsure about what to do about a problem, only to have people arrive within days to investigate/resolve it and not simply in order to charge me. Even better (particularly in rural France), even the way you meet people provides a worthy anecdote. My personal favourites are meeting the mayor thinking initially that he may be a kerb crawler on the path towards the local lake and almost being shot by a beautiful young “chasseur”.

My village is full of the type of people that I only used to dare dream about. They genuinely want to help without expecting anything in return.

Every day restores any faith you’ve previously lost in the human race. I can only imagine it’s like stepping back in time to a bygone era. It’s like family where people help each other out but with no horrible feeling of duty, simply it’s the “done” thing. Weekly meals at the local bar with the “usual suspects” become the norm very quickly if you ingratiate yourself to people of your commune. Village events and celebrations are simply an excuse to get together, eat, drink and just enjoy the company of people who live near you. 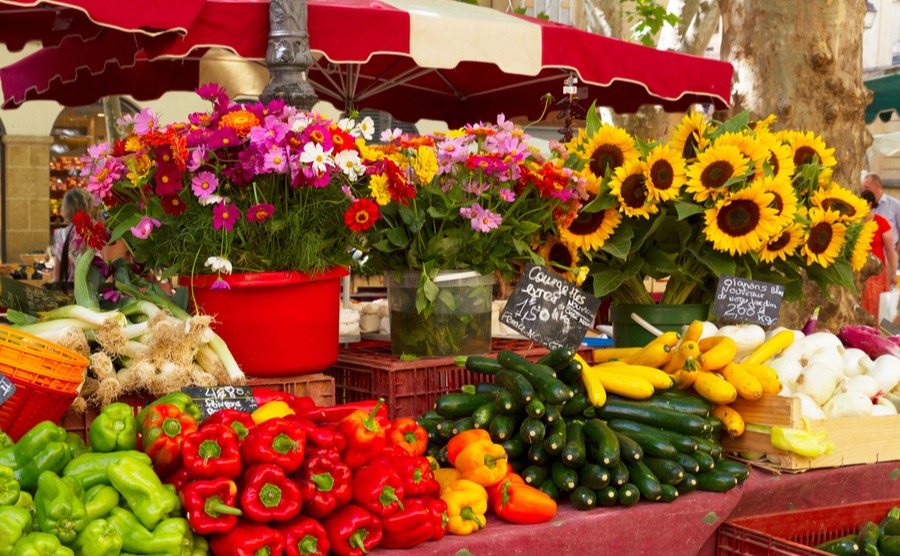 Spending a morning browsing the local market is one of the great joys of village life in France.

France is the magical world where one can even lose weight whilst inhaling your own bodyweight in pastries and cheese accompanied by vats of wine – BLISS! We won’t mention that the daily physical slog, of which most of us have probably never previously experienced the like (mainly keeping up with a garden that grows at a rate of knots) also very probably contribute. But it’s not even just the quality of the food, it’s the pure ceremony of it. It’s leisurely, togetherness, nothing short of pomp and ceremony and, even better, it’s viewed as spectacularly important. Village life in France focuses hugely around eating together with friends and family and taking your time about it too – they truly do make a meal of it.

Find out how to finance a purchase in France with your free ‘How to Pay for It’ Guide, packed full of tips and guidance.

People comment on sunshine altering mood and energy positively. I have no doubt that it does, but it’s the light that I believe really makes the difference. The light that enables you to see the tiniest creatures, the most beautiful colours and the wonderful opportunities that this fantastic country has to offer. Here in South West France we see the sun often and when we do, the nation doesn’t collapse into disbelief. Blazing sunshine especially after or even during rain, has a way of kicking your soul back to “happy”. Along with the quality of the air, which does exactly what it’s supposed to – breathes life and energy into you during the day and tires you out ready to sleep soundly at night. Not to mention the silence at night (which initially seems so overwhelmingly loud for someone who moved from a city) which has such a positive impact on your mental well-being.

Blazing sunshine, especially after or even during rain, has a way of kicking your soul back to “happy”.

I don’t believe that anyone who buys a house with a large garden in France is initially aware of the work that it brings. But it doesn’t seem to matter – once you’ve got over the shock and into the swing of it, it’s all worth it. Village life in France focuses around the garden. It’s not only a source of joy but more importantly, a source of self-sufficiency with the vegetables and fruit it produces. The sheer wonder of a garden changing appearance daily, ever evolving bursts of colour which fill you with wonder at the speed they change really gives the impression of living in a world of rainbows and what could be more joyous than that? 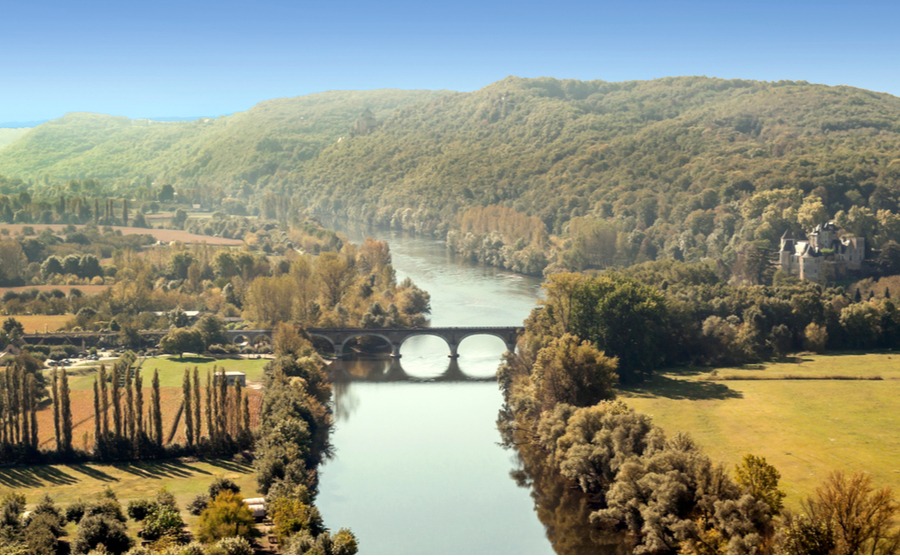 The far-reaching views in the Charente are something to treasure.

The regal purples of the majestic wisteria, the deep pinks and yellows of the alstroemeria, the unbridled joyful orange of the stargazer lilies and my own particular favourite, a veritable smorgasbord of wild flowers which pop up between the stones on my path and provide beautiful colour pops of red and purple. And of course, outside the perimeter of your own personal kingdom, the heart-stopping beauty of the countryside – undulating, vast expanses of greenery that can seemingly change composition overnight from fields of blood red poppies to cheery yellow sunflowers.

With the countryside in village life in France, of course comes the wildlife. Now this can be a shock at first, but as with everything becomes less so as time goes on. In the beginning you marvel at the lizards, particularly the magnificent blue headed fluorescent green ones. You notice the bees working fervently on the flowers and nature is truly spellbinding if you’re that way inclined. Yes, there can be scary things that we’re not used to but you do adapt quickly. It really is all relative. Protect your beloved dogs and cats sensibly against ticks, don’t scream at or get into combat with hornets and they really will just bumble loudly by. Be informed and sensible, learn about your new environment, be aware of it but never spend time worrying about it.

So you think you know how to start the admin involved in becoming resident here? Think again. It really doesn’t matter how much you’ve researched or how many people you’ve asked for advice, the rules and methods have probably changed since the advice was relevant. Even trying to find a starting point, provides a reminder of something else that you need which you don’t yet have. The treasure hunt to find the correct tax office relevant to your commune to attain your “Quitus Fiscal” to start importing your car, or finding out how to file your taxes is, I admit challenging. But if you just go with the flow you’ll come to realise that the admin challenges are purely a comical initiation – are you patient enough to be allowed to remain here? Just view it as a challenge to conquer or (because there are many of us that are mad enough to do it professionally) just pay the money and get someone else to do it/advise you.

Don’t miss the remaining free tickets to your Your Overseas Home, the show specially designed for serious buyers to get expert, face-to-face advice from specialists in property, law, currency, finances, removals and more.

One of my greatest loves about village life in France is the traffic, or in fact the lack thereof. The biggest traffic jam I can recall recently involved a tractor at the front of a procession of 5 cars. It held us up for about 3 minutes, caused no road rage incidents and gave us all a chance to admire the scenery. I often travel to my nearest town 20 minutes away and not see a single car. If I do the chances are that they are someone I know so we may stop and shoot the breeze. It makes the nightmares of the M25 and M4 evaporate into nothing but a distant memory.

Where does time go? Simple – je vous présente the French Time Vortex. I guess that’s just what happens when you’re having the time of your life!

A phenomenon that I have genuinely only ever felt to this extent in France. Why and how is it that you wake up early, having a minimal number of things to do that day, you look at the clock and suddenly it’s 10pm. You’ve not even yet thought about dinner? How did that happen? Where did it go? Simples – “je vous présente” the French Time Vortex. I guess that’s just what happens when you’re having the time of your life, living your best village life in France!

A child of parents who met whilst living and working in Greece, having had a family home in Crete for almost 25 years and having studied in Grenoble, France in her twenties, Beth has always felt more at home in those countries than the UK. A Service Delivery and Operations Manager in the UK, she realised quickly that she approaches problems and challenges in a very different way to most and created a successful Operations Consulting business in the UK. In November 2017 she made the decision to transfer both her life and business permanently to Charente, France. Since then she has managed minor renovations on her home, established herself as an integral part of her commune and re-established her operations consultancy in France. Through Kalitera she provides business improvement and project management services to small businesses here as well as administrative support to individuals.