Why buy a property in Brittany?

Brittany is consistently one of the most popular areas for British property buyers. And not just because it’s easy to reach. This beautiful but rugged region is reminiscent of Cornwall in many ways, but with that lovely French lifestyle too! Discover the prices and the best places to buy a property in Brittany.

Brittany occupies the western edge of France with three sides of superb coastline. Its climate is mild, due to the Gulf Stream, a little warmer than Cornwall, but with those warm winds whipping up exciting storms on the coast. But there’s more to Brittany than the sea. It has wild forests, river valleys, pretty villages and even a few “mountains”. Sitting out on this far extreme of France, it has a thriving local culture and has maintained its ancient traditions. We think it’s one of the most exciting places to own a French home.

Being so easy to reach, Brittany is perfect for sharing the cost of a holiday home with your extended family. Read our guide, Buying with Family.

There are four lovely departments to choose from. Finistere (56) is the furthest west, Cotes d’Armor (22) is in the north, llle et Vilaine (35) in the east and Morbihan (56) in the south. The Loire Atlantique to the south was once a part of Brittany. It isn’t now, technically, since a reorganisation of local government but has many similar characteristics. 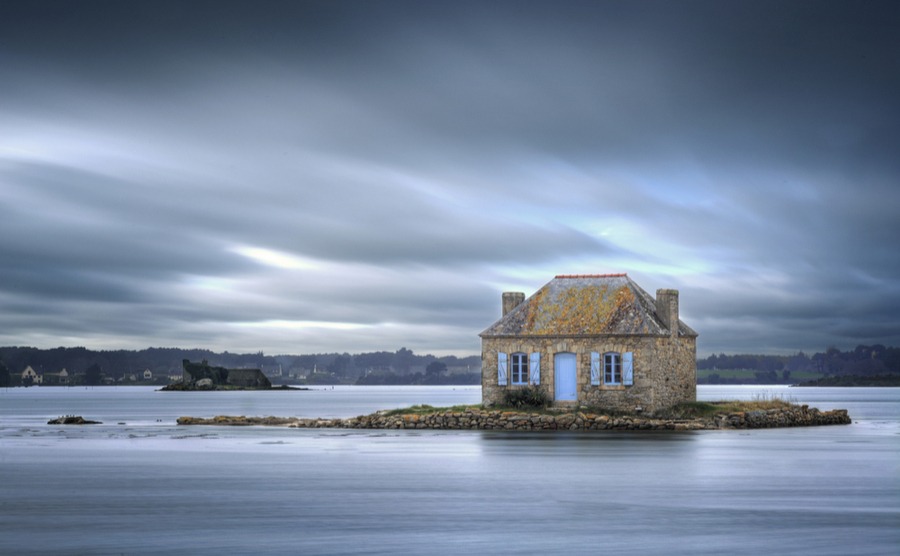 Splendid isolation. A house in Brittany

Why not Brittany! Brittany has so much to offer homebuyers. Firstly, you’ll never be short of something dramatic to look at. There are imposing cliffs and dozens of small rocky islands, perfect for kayaking out to and clambering over. Beware though, these are treacherous seas with huge tidal changes and swirling currents. The beaches are sandy, with some excellent surfing. There are estuaries and the inland sea at Vannes to explore too, perfect for foraging for clams and seaweed along the water’s edge.

There’s more to Brittany than the sea. It has wild forests, river valleys, pretty villages and even a few “mountains”.

Inland, there are ancient forests, including the Broceliande, reputed home of King Arthur’s nemesis Morgana le Fay. There is also heathland and marshes. Although mainly low-lying, the Montagnes Noires reach over 300 metres, which is higher than any point in southern England. The forests have wild boar, the heaths have hares and many of the rivers are teeming with trout and Atlantic salmon. That is, the ones that don’t get taken by beavers and otters.

But you wouldn’t only be coming here for the geography. Brittany is genuinely unspoilt. It has medieval towns with stone and timber houses, and little development of the coasts. Breton is an interesting and unique culture. The Bretons have long considered themselves different from the rest of France. Their their own language is closer to Cornish than to French, but Breton is still spoken by over 200,000 people. Rather more than the 2,000 native Cornish speakers.

The whole region has a general feeling of still waiting to be discovered. If you do head out on a viewing trip, it’s just under 300 kilometres west to east. The two cities of Rennes and Brest are at either end. On the way between the two, and around the 1,500km coast, you’ll find hundreds of wonderful communities to choose from. Here are a few.

FIND homes in Brittany for sale on our property portal.

This is the regional capital and the largest town in Brittany, with a regional airport. After it was burnt down in 1720 it was rebuilt during the 18th century. It remains a charming place with narrow cobbled streets and timber and stone buildings.  These days it is an important industrial hub, internationally known for telecommunications research. It also has two universities.

Brest, in the department of Finistere, is a major naval port and also has a university. Again, an important industrial centre, it is also popular as a sailing port.

A historic town with beautiful 15th century ramparts, this has long been a very popular tourist destination and is the third largest town in Finistere.

Dinard is a gorgeous town situated on the coast with some fine sandy beaches and a real ancient feel to it.

In the Morbihan department, this is a fishing port founded by the French East India Company in 1664 from where its name originated. Lorient means “The Orient” or quite literally the port from where ships set sail for the Orient. It appeals to sailors as well as those interested in Celtic traditions. Check out the annual Celtic festival, a fairly grand affair which takes place each August.

This is a quaint fishing port and very popular tourist destination in the Morbihan.

Quimper is the capital of Finistere, again a very pretty town situated by the river Odet.

Saint Malo is one of the most popular tourist destinations: a walled city on the north coast which was badly damaged during the Second World War but was entirely rebuilt. Here is where the tide rushes in and out rapidly. It’s one of the great sights to visit in Brittany.

Although not officially in Brittany any more, Nantes is worth a mention as it is not only France’s fourth largest port, but it has its own airport. It’s very handy for anyone travelling to the southern part of Brittany. 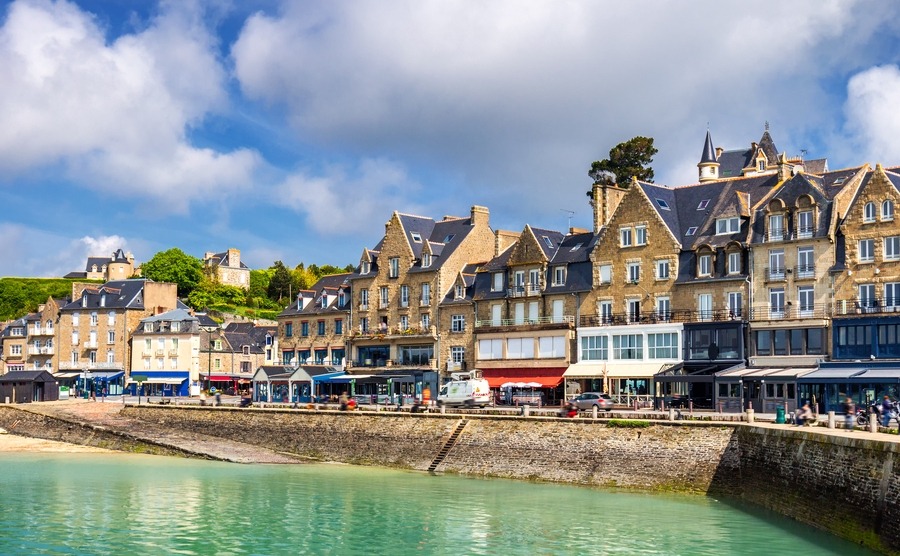 With 1,500km of Brittany coast, there is plenty to choose from. This is Cancale.

Prices of property in Brittany

This is the most expensive department with an average property price of €2250 / m². You can find a good renovated two-bedroom property for around €100,000.

This department on the south coast has a very temperate climate plus lots of sandy beaches and quaint fishing ports. The average property price is €2090 / m². If you prefer modern, there are plenty of decent-sized modern properties here too.

The most popular department for British buyers historically, this is situated in the northern part of Brittany. It boasts some beautiful coasts, such as the Pink Granite and Emerald Coast. Average property prices here come out at €1480 / m².

FIND homes in Brittany for sale on our property portal.

Lying to the west of Brittany, this department has a rugged feel to it, with many charming fishing ports dotted about as well as its naval port capital of Brest. Its average property price is €1580 / m². But there are many great stone houses to choose from at little over the €50,000 mark.

As you would imagine, property in Britanny by the coast is more expensive than inland. Despite this, you are never going to be more than an hour away from the sea wherever you buy in Brittany. Looking a little further inland may well pay dividends and you will find some superb natural sights such as gently rolling landscapes and valleys but also extremely pretty market towns. There are plenty of renovation projects around here too. The French don’t traditionally go in for house renovation, so a budget as low as €30,000 should be sufficient. And if you’re up for a bit of work, such houses often come with some land and an outbuilding or two to go with it.

Explore our free insider guide, How to Negotiate Abroad, for help and advice from estate agents.

Brittany is very accessible by all means of transport:

The ferry is probably the most obvious option. The two main ports of entry are St. Malo and Roscoff. Brittany Ferries offers a wide choice of crossings departing from either Portsmouth, Poole or Plymouth and sailing to St. Malo, Caen, Le Havre, Cherbourg and Roscoff.

By car is easy also, as the whole region is very easily accessible from all the Channel ports or indeed from other parts of France. The motorway network heading towards Brittany is excellent too, with two main routes as well as dual carriageways. The area has, in recent years, been well integrated into the French motorway network.

By train is a great option. Brittany has a top rail network and Rennes, for example, is just two hours from Paris Montparnasse. So you can leave the UK at teatime and be in your Brittany home for dinner.

By plane again is easy and you are spoilt for choice here. Several airlines fly to Brittany’s various airports from many regional UK airports in the UK. Check out Ryanair, Flybe, Aurigny, Easyjet, British Airways, all of which usually have regular flights year round to and from many airports in both countries.

The ease and choice of transport to Brittany along with its natural beauty and reasonable property prices have contributed to make it one of the most popular areas in which to buy a second home.