Le Pen or Macron: who would be better for the British in France?

If you’re buying in France, the result of the presidential election on Sunday is likely to have an impact on your right to move there, the cost of your home purchase and the society you’ll be living in.

After months of polls and campaigning we are down to the final two candidates and the last few days of campaigning. In the first round, French voters cast the country’s political establishment aside, as far-right populist Marine Le Pen and political novice Emmanuel Macron progressed to a straight shootout for the top job this Sunday, 7th May.

As well as being a young, business-minded politician, Emmanuel Macron at least speaks English

Emmanuel Macron is still the frontrunner at around 60% on the opinion polls, but Brexit and the US election suggest we can expect the unexpected in politics right now. So which of these ambitious outsider politicians will be better for British property buyers in France?

Relations with the UK

Le Pen: They’re both on the right wing (Le Pen much further right than May) and Theresa May has shown a willingness to work with President Trump, so she seems likely to befriend Le Pen. As a vocal supporter of Brexit, Le Pen has said France will be Britain’s ally in Brexit negotiations if she wins the election. Great in theory, but a surprise triumph for anti-EU, anti-euro Le Pen could cause chaos in the single bloc; making Britain’s other negotiating partners even more defensive and hard-line as they attempt to deter other nations from jumping ship.

Macron: Macron is an admirer of all things EU and is unlikely to give the UK any concessions in Brexit negotiations if elected, least of all to the single market. A Macron victory may not lead to complete animosity between Britain and France however, because as well as being a young, business-minded politician Emmanuel Macron at least speaks English, unlike Le Pen. 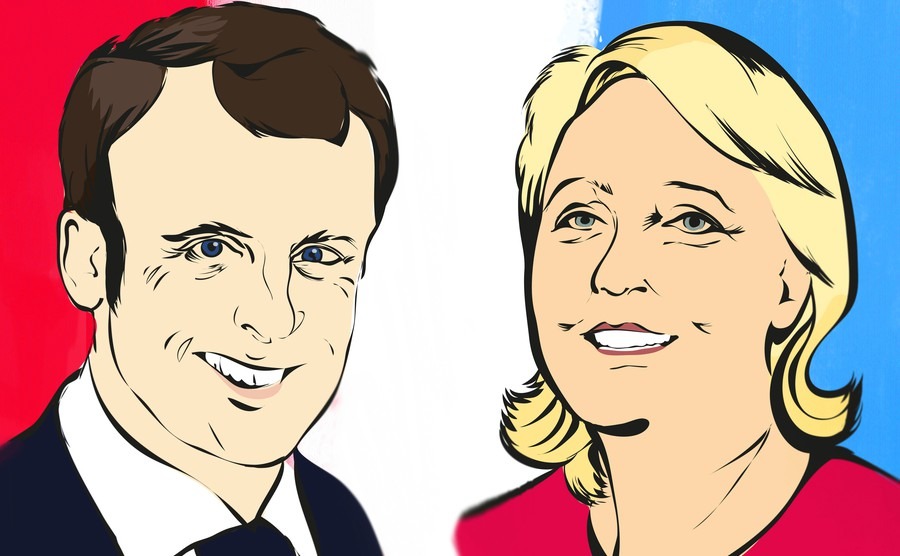 Who is better for British buyers, Le Pen or Macron? (Anait / Shutterstock.com)

Le Pen: Buying a property in France will create a requirement to transfer funds overseas, exposing you to the ups and downs of the currency markets. Le Pen says she wants to return to the franc, and that would hit the euro hard. Her promise to call a referendum on France’s EU membership within six months of victory will also dent the single currency and strengthen the pound. The political and economic uncertainty of such a move could be reminiscent of the Brexit vote, resulting in a welcome rise in the value of the pound against the euro. Welcome for British property buyers in France, that is.

Macron: Macron’s commitment to strong EU integration is likely to be good news for the euro, as demonstrated by the single currency’s surge following his victory in the first round of voting. If we were to see more of the same with Macron at the helm, British buyers in France could be left with a dent in their wallet as the price of property increases thanks to an unfavourable GBP/EUR exchange rate.

Le Pen: Le Pen’s nationalist campaign has focused on a hard-line approach to immigration, having pledged to restore French borders. She’s promised to “do more to stem the flow of migrants and refugees pouring into France”. Her desire to introduce “drastic” changes to immigration rules centres on removing the free movement of people in the EU provided by the Schengen Agreement. By doing so she plans to cut net migration from 140,000 to 10,000. The proposal would freeze long-term visas and see any company hiring foreign workers hit with a 10% tax. Any concerns among British property buyers that this robust approach could jeopardise their plans are tempered by Le Pen’s apparent willingness to protect the rights of Brits living and working in France once Brexit negotiations commence. In simple terms, would she be likely to favour migration from an old ally, Britain, over other countries?

Would Le Pen be likely to favour migration from an old ally, Britain, over other countries?

Macron: In contrast Macron has refused to get tough on the EU’s Schengen area, claiming he would back the continued free movement of people across France’s borders. He believes “improving” Schengen rather than abolishing it will enable France to manage immigration adequately. By creating “thousands of jobs” for the police force across the Schengen area, he claims borders will be more closely monitored. Macron’s more relaxed stance on the issue could mean business as usual for Brits heading to France.

Le Pen: Marine Le Pen’s policies aim to give priority to French nationals in jobs, housing and welfare. Unlike Macron she plans to build up the welfare system by lowering the retirement age from 62 to 60, increasing aid to the elderly and providing child benefits without conditions (for legal residents of France). Britons intending on living and working in France will be keeping a close eye on her plans to implement extra tax on foreign workers and restrict nationality rights.

Macron: Macron hopes to be given the chance to remake what he believes is a “failed” and “vacuous” French political system. His proposals for economic reform could prove particularly divisive however. Not only does he plan to slim down one of the world’s fattest welfare states, he is intent on cutting public spending and shrinking the public sector. Is the French public ready for such disruption or will we see a wave of strikes and chaos across the country? On the other hand, anyone planning on starting a new business in France will be pleased to hear that Macron intends to cut business tax and relax labour laws.