Getting into the festive spirit, French style

Christmas – a magical time of celebration, delicious food and spending time with friends and family.  If you’re preparing for your first Christmas in France, congratulations and here’s what to expect…

There’s nothing better than the run up to Christmas in any country and Christmas in France is no different, although notably in a far less commercial way than in the UK. The Christmas build up starts around the beginning of December with December the 6th being of particular importance in Northern and Eastern France due to the festival of St Nicholas. According to folklore once upon a time there was a group of children who got lost in a countryside resulting in being captured by a wicked butcher. Luckily for them, they were both rescued and returned home by St Nicholas, hence his reputation as the protector of children.

Find out everything you need to know about moving and settling abroad with your free Emigration Guide. 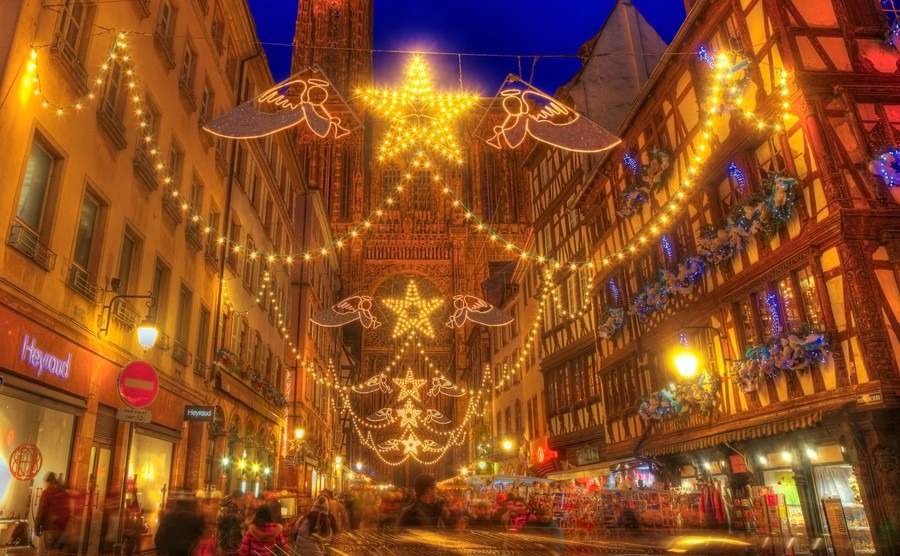 Strasbourg’s fabulous Christmas market is the oldest in France.

The weekly “brocantes” of the summer months make way for Christmas markets, selling everything from local food and drink to artisanal gifts and crafts, and people love nothing more than spending a Sunday meandering around getting into the spirit. Wherever you are based, you can find local Christmas markets practically every weekend in December. Of course, if you really want to be wowed, the markets in Strasbourg (the oldest Christmas market in France), Paris and Nice are definitely worth a visit.

The weekly “brocantes” of the summer months make way for Christmas markets, selling everything from local food and drink to artisanal gifts and crafts, and people love nothing more than spending a Sunday meandering around getting into the spirit.

Even the smallest villages and communes make a big effort with their decorations. Lights are of particular significance with larger towns and cities proudly hosting spectacular light displays or even their own light festivals – Lyon being of particular note with the popular four day “La Fête des lumières”. Householders in the town also place candles on window ledges to provide a truly spectacular sight. And who would ever forget any Christmas in Paris having seen the Tour Eiffel lit up in all its glory.

Make sure you know how your purchase could be impacted by a no-deal Brexit with our guide, How to Live in France After Brexit. 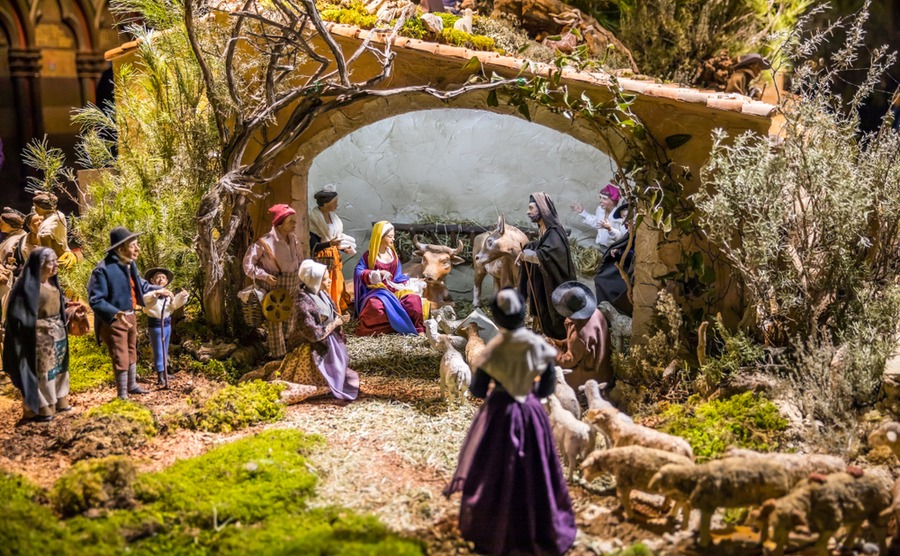 The French are big on nativity scenes – can you spot ‘le ravi’ in this one from Notre Dame? maziarz / Shutterstock.com

The nativity scene is all important in France, being a predominantly Christian country and you will find one in practically every town, village and commune however small as well as often in private households. They feature characters seen within every village such as the farmer, the hunter, the baker, the laundry maid as well as a figurine called “le ravi” meaning “the delighted one” who has his arms raised to express his delight at the arrival of the baby Jesus. The baby Jesus is not placed in the manger until Christmas Day. You will also see many little wooden figurines named “santons” (little saints) appearing, the provenance of which stems from the period during the French Revolution when nativity scenes were banned.

Houses are decorated inside with evergreen plants, mistletoe, candles and lights – with the significance of lights (joy) being central to the theme of this time of year.

There is a notable slow-down in business as people prepare to spend proper down time with friends and family – something which, whilst always being a priority in France, becomes even more so at this time of year. There is a definitive shut down of businesses, in some cases from the Friday before Christmas but occasionally from mid-day on Christmas Eve until sometimes almost the second week of January, so don’t expect to be able to get much else done when it comes to French administration and just enjoy and appreciate the break.

We can put you in touch with an expert, trustworthy Independent Financial Advisor today.

Christmas in France is very much centred around friendship, family and fellowship. At this time of year, many new friendships are formed when people consciously invite others who are otherwise alone to join them for meals or drinks. It is considered not the “done thing” for anyone to spend this time alone.

France is renowned for making a meal into a ceremony and Christmas in France is quite something to behold when it comes to food and drink.

Now we get to the best bit for some. France is renowned for making a meal into a ceremony and Christmas in France is quite something to behold when it comes to food and drink. If you think the UK is a never ending conveyor belt of snacks, food and treats, you may have to rethink. 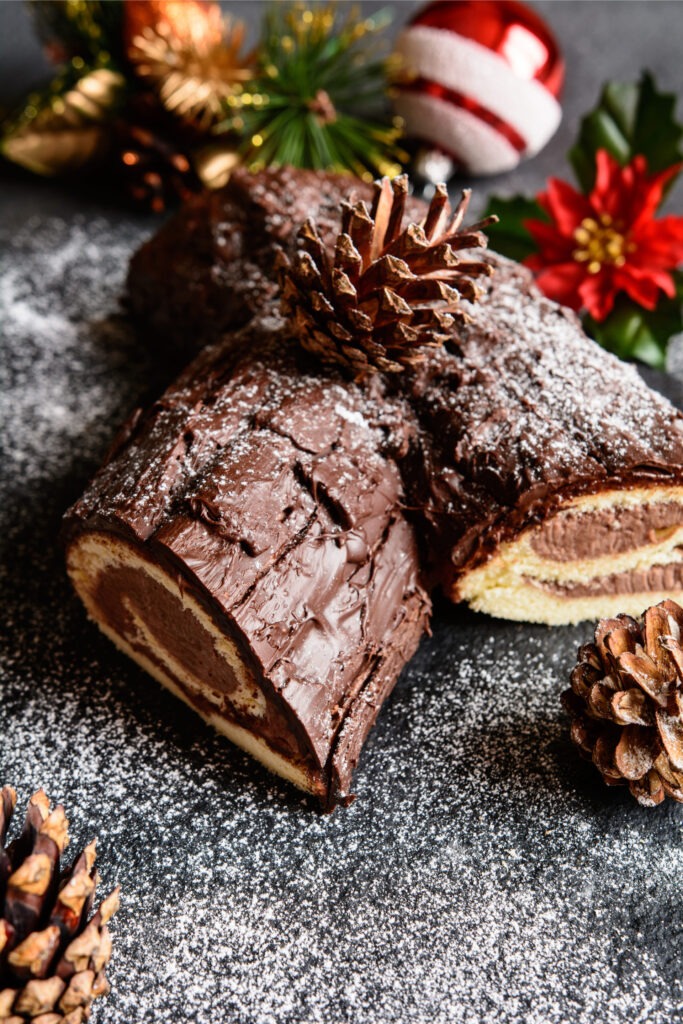 The main Christmas meal is usually eaten on the 24th, rather than the 25th.

Unlike the UK the main day of celebration is December 24th when the day builds up to a fabulous evening meal – Le Réveillon. A word of caution though, in a deliberate trap for those determined to improve their French, “Le Réveillon” is also used to describe the evening meal on 31st December so if you’re invited to someone’s house on this day, ensure you check which one!

This is a day for family and a visit to church in the build-up of the anticipation of the wonderful evening to come. Tables are set ornately with candles, scatter decorations and lights and you may well be surprised by the wonderful tradition of the tablecloths being knotted at the corners, done in order to block the devil from joining in. A place is also often set for either “an unexpected visitor” or for “the poor”.

The meal on the 24th can literally last for hours, with menu options differing slightly from region to region – but always starting with aperitifs/nibbles, often followed by a smoked salmon and oyster starter, then foie gras. It may be a good idea to ensure you don’t eat for the couple of days prior!

Unlike in the UK, a turkey is a rare sight nowadays in French households although you can still see them, but more generally, the main course of this meal is either goose or “capon” (cockerel) or “pintade” (fowl) or duckling accompanied by some form of potatoes often with green vegetables sautéed in garlic.

Of course don’t forget the cheese, which is a standard course in any respectable French meal and if that wasn’t enough, there is of course an obligatory (or more than one) dessert often in the form of a “buche de Noel” – a yule log. However spare a thought for those in Provence, home of the traditional 13 desserts which is designed to symbolise Christ and the 12 apostles! And lord help you if you’ve got any room left after that lot to graze on chocolates.

Champagne is very much drunk at this time of year and every course of this wonderful meal will be accompanied by a wine specifically suited to each course.  Followed naturally, by a slowly enjoyed digestif and coffee.

Following the meal on the 24th people often leave food and wine on the table for the Virgin Mary and children place their shoes by the front door hoping to find them full of presents on Christmas morning. A log is burned in many households (often having had a dousing of wine!) from Christmas Eve until New Year’s Eve to symbolise luck for the coming year. Cards are not so much sent at Christmas in France but more traditionally in the New Year to wish luck and good wishes to friends and family for the year ahead. A Christmas Day walk “en famille” is also traditional although you can probably forget it if there’s any rain in sight – France is definitely a nation of fair weather walkers.

Of course as with any other country, Christmas in France doesn’t stop there. Just when you’ve recovered from the excesses of Christmas, it’s time to do it all over again for 31st December. Once again, the evening of this day is normally spent with friends and loved ones, over a long unhurried large several course meal, similar to Christmas Eve. But in France, the celebrations continue even longer as due to being a fairly traditional religious country. During the first few days of January, there is the tradition of baking a special cake called “la galette des Rois” – the kings’ cake. 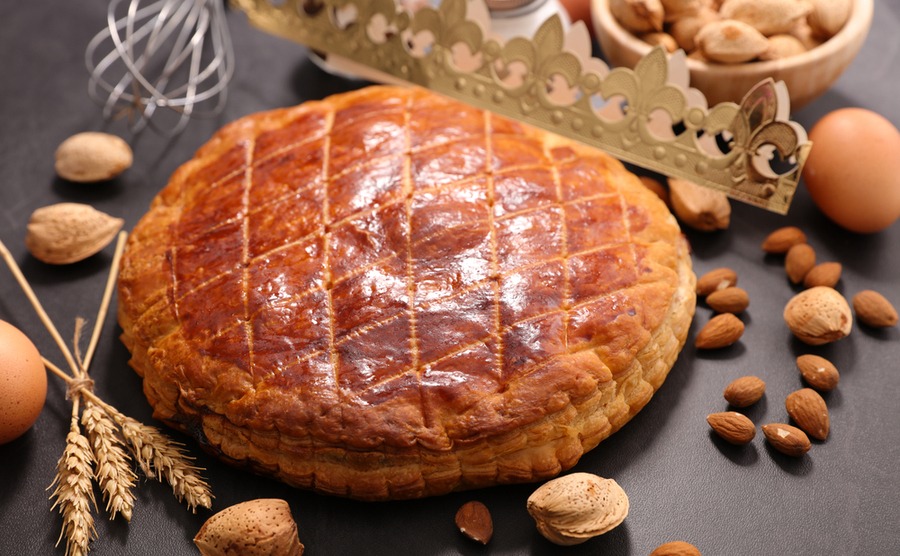 This traditionally round puff pastry based cake houses a special trinket called “une feve”, meaning a bean and is eaten on 6th January in order to celebrate Epiphany (the journey of the 3 kings following the guiding light of the star of Bethlehem to see the baby Jesus with their gifts of gold, frankincense and myrrh.) The serving of the cake becomes a game as traditionally, a child hides under the table and shouts out the name of the next person to be served a slice so there is no way of knowing in advance who will end up with the piece cocooning the feve. The “feve” has evolved these days from a bean to a tiny porcelain figure so be careful how hard you bite into it but whoever finds it is said to receive instant good luck and also gets to become the King or Queen of the party as well as attaining the privilege of wearing the crown. Be careful what you wish for though, as it is also tradition that the King or Queen will then be in charge of providing the galette for the next year’s festivities.

Wishing you all a very happy and joy filled Christmas in France and a successful 2020!