News and reports from the Ukraine conflict have been both heartbreaking and extremely troubling. But where there is misery and cruelty, there are always acts of kindness and hope to be found, nowhere more so than in France’s welcome to refugees.

It’s around 1,200 kilometres from France to Ukraine, and while there are several countries between them, France and her citizens have taken solidarity with Ukraine very seriously indeed.

Since 2014 France has supported Ukraine in the form of emergency humanitarian and medical assistance. In February this year French Foreign Minister Jean-Yves Le Drian announced that France would reinforce its support to Ukraine in “all its forms”. 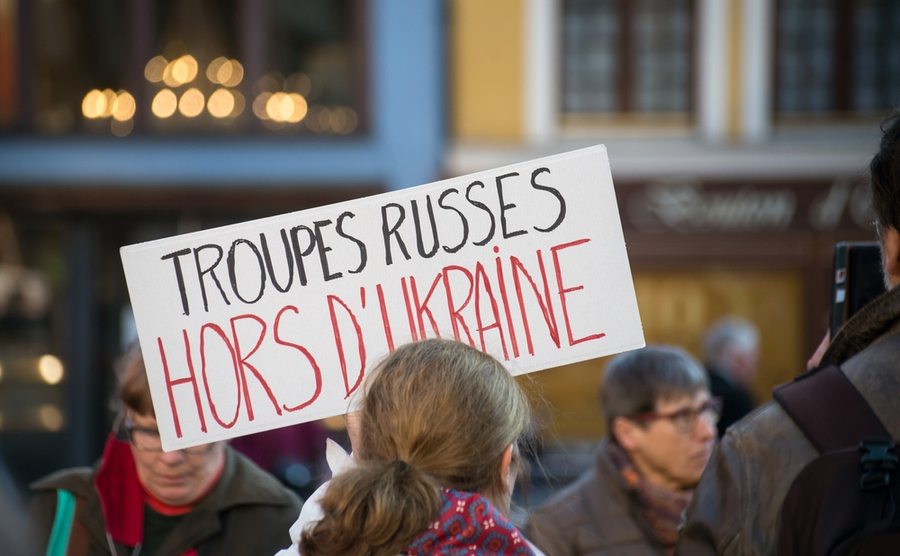 French protests about the invasion of Ukraine (NeydtStock / Shutterstock.com)

Since the threat of the conflict began, President Macron has made valiant attempts at negotiation with Putin. Despite still being challenged by the coronavirus pandemic and being in the midst of Presidential elections. Indeed this may explain why his official presentation as a candidate came only at the final hour before the cut off time.

The French government has been working actively with local authorities, associations and citizens alike to identify accommodation options for displaced Ukrainians arriving in any department in France.

They have put mechanisms in place to support France’s aid effort, with plans swinging into action and information widely available on what help is on offer, both from the country as a whole and individuals.

No one able to enter France is being turned away. Anyone with a Ukrainian biometric passport can enter France without an additional visa. Those without a biometric passport need to visit a consular office in a country bordering Ukraine to be granted entry. Stays of up to 90 days are permitted, after which the refugee must get further permission from a Prefecture in France to stay longer.

France has started converting unused buildings into makeshift accommodation for those able to leave Ukraine. Communes and associations have been invited to register their ability to host via the government website. French citizens are offering spare rooms and guest accommodation as temporary or longer term shelters. Anyone wishing to do this, can do so using a special website: Je m’engage pour l’Ukraine.

In France, where many people run guest accommodation as businesses – including many British, Americans and others, of course – offers of accommodation from ordinary citizens have truly shown how much France as a nation has been touched by this crisis.

Mairies are being given specific instruction as to where to direct enquiries from concerned citizens living within their communes or for any displaced people arriving. People can also record their names and addresses on a volunteers lists at local Mairies, which will then be shared to the national database.

Further information on direction and financial aid can be sought from the local CDC or Prefectures within each department. The CDC “Caisse des dépôts et consignations”, is a French financial institution that has existed since 1816. It has various missions but amongst them are financing social housing and financing public debt.

Other ways to donate

Across France, people are also donating clothes (for both adults and children), non-perishable food, healthcare and hygiene products as well as pet food. There is though, a train of thought, backed up by testimony of some that have already arrived in France, that cash may be a more valuable donation or commodity. Of course in part, due to the logistical difficulties in ensuring other donations are received by the people that actually need them.

People are also volunteering their time, patience and comforting company as well as translation services. English speakers are being particularly sought after within the Paris area. Counsellors and healthcare professionals are highly valuable in these times of crisis.

The impact on France

France is likely to see large numbers of people arriving. Being on route between Ukraine and the UK where many are seeking refuge with friends and family, there are reports of people facing delays in acquiring permission to enter, if not being rejected at UK borders. This will put great strain on France’s economy.

As every other country, France is already feeling the repercussions of sanctions imposed against Russia. Whilst people in France are offering to do anything they possibly can, they are also starting to face the impact of alarmingly elevated oil prices (used by the majority here to heat homes and fuel hot water) and even reports of oil becoming less readily available. With the cost of petrol also rising, it is easy to see that the impact of this crisis will certainly have repercussions on France and her people.

But for the moment at least, it seems very much that the priority for France and her people is to provide safe haven for those who so obviously very much need it.