Homes with mountain views are abundant in France and they’re not all in the Alps or Pyrenees. Follow Chris Froome up these three mountain ranges in next year’s Tour de France, for a rural home with four-season appeal and rooms with views

It has just been announced that all five of France’s mountain ranges will be showcased in next year’s Tour de France, cycling’s most famous race. As well as the usual climbs in the Alps and Pyrenees, the three-week Tour will include stages in the Vosges, Jura and Massif Central mountain ranges when it takes place in July 2017.

This is the first time in 25 years that all of these ranges will feature in the race. If viewers (and visitors; don’t miss your chance to see Britain’s greatest ever cyclists in one of the biggest sporting events of the world, completely free!) look over the heads of the cyclists they will see that France’s mountainous regions offer the most gorgeous scenic property with outdoor activities on the doorstep, all year. Even better, as property buyers head of the beaten track the prices tumble quicker than the peloton on wet cobbles. 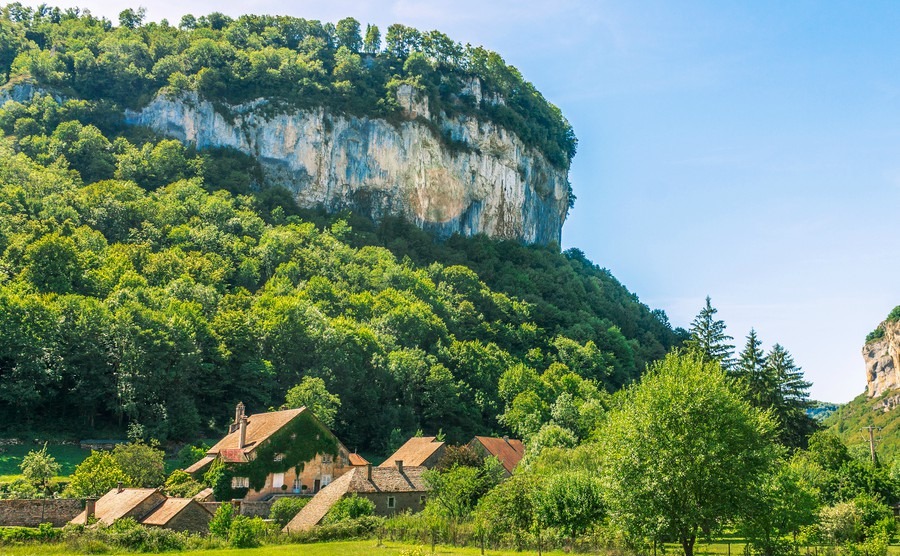 The medieval village of Chateau-Chalon, in the Jura mountains

Divided between the Alsace, Lorraine and Franche-Comte regions and next to France’s eastern border with Germany, the Vosges Mountains are famous for their rounded peaks, known as ‘ballons’.

Sixty per cent of the Vosges is covered by forests, and the landscape is dotted with glacial lakes, high-altitude meadows, deep valleys and waterfalls. Popular in winter for cross-country skiing, the Vosges are often compared to Germany’s Black Forest and the area has a strongly Germanic feel.

Key towns include Strasbourg, Mulhouse and Colmar and a further highlight are the picturesque Alsace wine villages. In the valleys you are never far from a fruit brandy distillery or working dairy farm with fantastic restaurant.

The eastern edge of the Vosges is home to some of France prettiest villages, including Eguisheim, Riquewihr or Ribeauville, all beautifully preserved medieval villages that should win over most house-hunters. 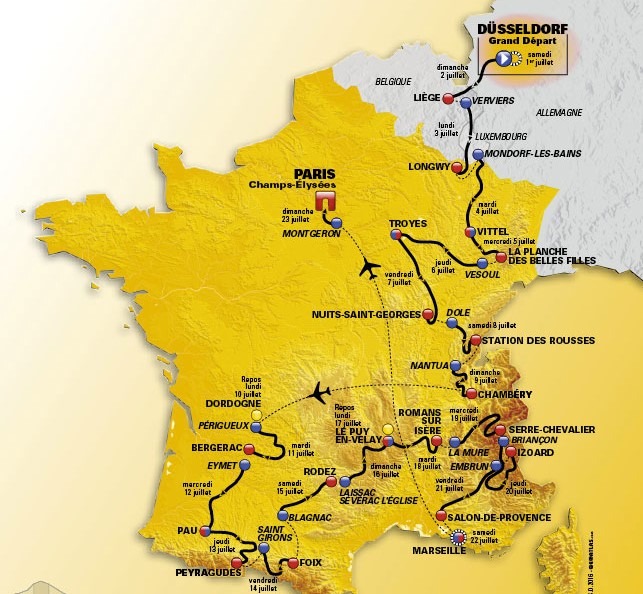 Still in eastern France and cradling France’s border with Switzerland, the Jura Mountains end at Alsace to the north and the Rhones-Alpes to the south. The location means they feel more Alpine, reinforced by the fact there are resorts offering downhill skiing, including Les Rousses.

However, these mountains are more rustic than the more famous and commercialised slopes in Savoie to the south, with average property as little as a third of the price, and there is a real sense of being off-the-beaten track. The Jura are characterised by deep rolling valleys, known as combes, which makes for exhilarating cross-country skiing with stunning views.

A highlight for lovers of the great outdoors is the Jura Ridgeway, a 310-kilometre trail that can travelled on foot, bike or horseback, or skis in winter. Two good places to start your property hunt are Les Rousses and Saint-Claude.

By the time the riders get to the Massif Central on 17th July, either Froome or Cavendish’s climbing dominance should see one of them out front. Occupying a large chunk of central France, the once volcanic Massif Central is a large plateau locating for the most part in the regions of Auvergne and Limousin. The heart of the Massif Central is the impressive Auvergne Volcanoes Regional Park, the landscape of which reflects its geological roots.

Dome and crater-shaped peaks, wind-swept plateaux, large lakes and broad sweeping valleys are all typical of this area. Ideal for types of outdoor pursuits, there are also three ski resorts for winter sports at Le Mont-Dore, Super Besse and Le Lioran.

Thanks to the size of the Massif Central, there are plenty of pretty villages to choose from, but for starters try Orcival or Volvic (famous for its bottled water) in the northern part of Auvergne park or Salers in the south.