Driving south via the Millau Viaduct

The convenience of getting to your pad in France is a real draw for British property buyers. It’s close proximity to the UK means you can pack up the car, head to a channel port and roll onto a ferry or the Eurostar, without the stress of worrying about budget airline baggage restrictions.

If you’re planning on driving down to the South of France for a viewing trip this summer, there are several scenic routes you could take through the country’s fascinatingly diverse landscape. One of the most spectacular is found along the A75 motorway between Clermont Ferrand and Beziers, thereby crossing over the Millau Viaduct. Having travelled over or under the English Channel, skirted around Paris and driven through the rolling countryside in central France, pickup the A75 just outside Clermont Ferrand for the final third of your adventure south.

The Millau Viaduct is so awe inspiring it has become something of a tourist attraction.

You won’t come across any tolls along this stretch of road that’s also named the “Méridienne”. The best bit is, much of the road runs at high altitude passing sweeping landscapes with fabulous views.The Millau Viaduct makes up just 2,460 metres of the A75-A71 autoroute axis from Paris to Béziers and Montpellier, but is so awe inspiring it has become something of a tourist attraction, causing people to drive slowly over it or even stop to take photos. When it first opened in 2004, having taken three years to complete, the speed limit on the bridge was set at 130 kilometres per hour – the same as French motorways. This was changed to 110 kilometres per hour a couple of years later, because so many tourists were slowing down to take in the scenery and the structure itself. 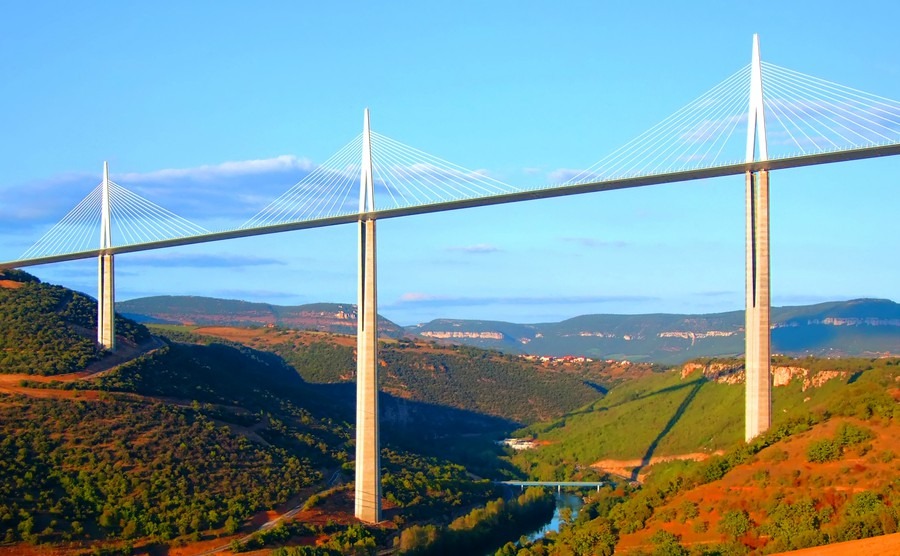 We frequently take this route to the south of France, and it never fails to inspire. Sometimes emerging from low clouds, such is its towering height. In fact, constructed at a cost of €394 million and standing at 343 metres at its highest point, it’s the tallest bridge in the world. The forward-thinking design has earned well-deserved praise from around the world, although to begin with many engineers and architects thought it would be impossible to construct it. The men behind this feat of engineering werte Michel Virlogeux, a French structural engineer, and the renowned British architect Sir Norman Foster. Mr. Virlogeux specialises in bridge design with years of experience under his belt, and Sir Norman Foster is well known as one of the finest architects of his generation.

It is widely considered one of the finest engineering achievements in Europe.

Plans were first mooted back in 1987, after motorists became increasingly frustrated that the route from Paris towards the South of France was clogged with heavy traffic. Before the bridge existed, traffic passed through the Tarn Valley and along the N9 near the town of Millau (a very pretty spot and well worth a detour), causing considerable congestion in the peak summer months. The design and construction of the Millau Viaduct finally got the go ahead to cross the Tarn River Valley in 1991.

Without getting too technical, its design is in the form of a cable-stayed bridge rather than a suspension bridge, meaning there are multiple cables extending from each pillar which support each section of the bridge around each pillar. Seven pillars had to be constructed, each weighing 700 tons and they needed to be in exactly the correct place for the design to work. It is widely considered one of the finest engineering achievements in Europe.