Dates for your diary – France’s many public holidays

This will be a bumper year for public holidays in France. They’re a good time to see France at its best, but a bit troublesome if you planned on buying a home that day!

Many people in France are more than happy to say goodbye to 2016 and welcome in a year of peace. We do have the French presidential elections coming up in April and May, and what will happen then is really anyone’s guess, but the New Year has given a renewed sense of optimism to many.

France has more public holidays than the UK

For those working in France, there is good news when it comes to time off. France has more public holidays than the UK anyway, but this year there will be six long weekends. It isn’t always like that; if the holiday falls at a weekend in France, no day is given in lieu as it is in the UK, but this year many of the holidays come on a Monday or Friday.

The only holiday which falls on a weekend this year is the 1918 Armistice remembrance on 11th November. The date is always remembered, on whichever day it falls, again unlike the UK which not only doesn’t offer a public holiday but also holds its main commemorations on the closest Sunday. 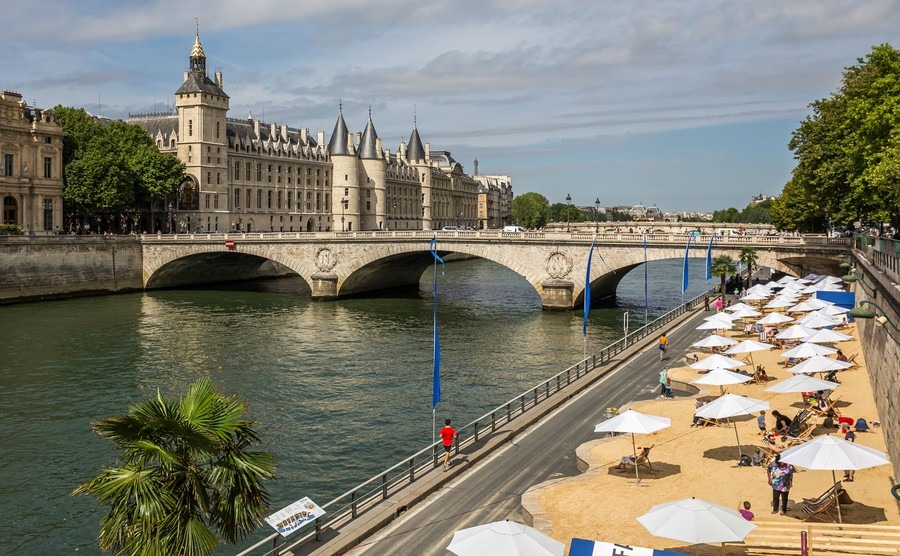 Paris’s riverside beach: the French make a holiday wherever they can! (maziarz / Shutterstock.com)

As for the remaining holidays, Workers’ Day (Fete du Travail) falls on May 1st, VE day falls on May 8th, both Mondays, as is Christmas Day, Easter Monday and Pentecote. Bastille Day – the most celebrated day in France on July 14th – will be on a Friday.

You won’t find estate agents working on those days, so don’t book a viewing trip on those weekends.

This is good news for the tourism industry in 2017. France suffered a decline in numbers of tourists last year. For property hunters, you won’t find estate agents working on those days, so don’t book a viewing trip on those weekends.

France has 11 public holidays. May is particularly notable, with one of them seeming to occur every few days! The others not yet mentioned here are: Assumption on August 15th (said to be the busiest day of the year on the roads) and All Saints on November 1st.

In practice, many of these holidays stretch even further since if they fall on a Thursday, for example, the French will “make a bridge” (faire le pont) and give themselves a long weekend.

The French are as a nation of hard workers when they do work (although daily working hours are shorter than in the UK) but there is no doubt that they also understand the importance of leisure time and the work/rest ratio really does seem to make sense. Vive La France!