Brexit news: what happens next?

As Britain takes the decisive step towards leaving the EU, Alexis Stratfold, the France Property Guide’s writer in France for nearly 10 years, reflects on Mrs May’s letter and the shape of things to come.

Prime Minister Theresa May has started the process of the UK leaving the EU. She commented on the relationship being a “deep and special partnership” and appears to be keen to stand by this sentiment as she has often repeated it in the House of Commons since Britain decided to withdraw from the EU. Can we trust her to do her utmost to stay friendly with France?

Prime Minister May’s approach at the outset was certainly cautious, but quite a warm one and far less hard than had been imagined. She is undoubtedly hoping for a good trade deal and perhaps has figured that making a soft initial approach will pay dividends in the end. There were some British Members of Parliament who apparently felt that the nature of her initial speech made it look as though the EU may be asking themselves about the point of the UK leaving!

As I write just 24 hours after Mrs May’s speech, the pound is at €1.165, its highest level for almost a month and up three cents on the middle of March

She said in her letter that any deal should be concluded faster the EU-Canada pact, which took more than seven years to agree, and that it should be “of greater scope and ambition than any such agreement before”. She added that the deal should embrace “sectors crucial to our linked economies such as financial services”, clearly thinking of the City of London. 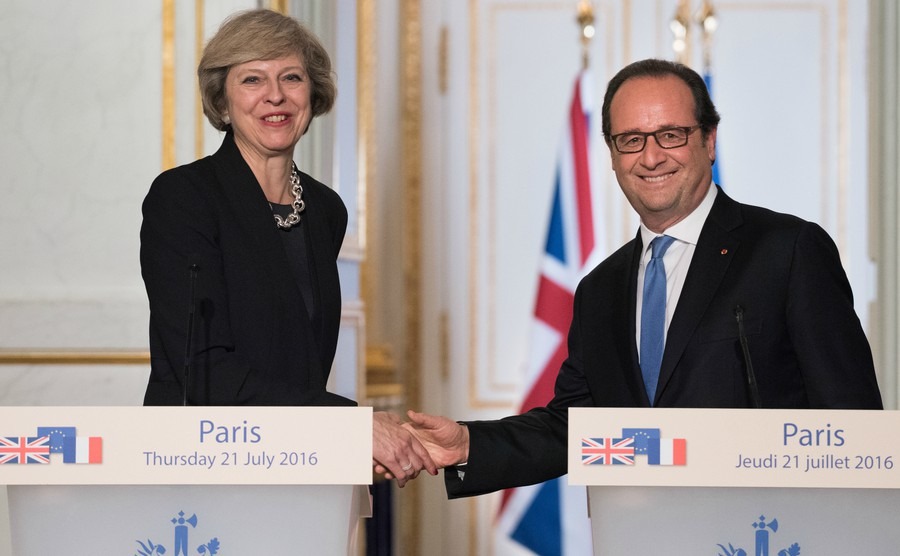 All smiles last year, but what of the future? (COMEO / Shutterstock.com)

She also said that any failure to reach an agreement would in the end mean the fight against terrorism would be weakened: a subject which concerns so many people across Europe and the UK. It seems she is suggesting here that the UK helps the EU in terms of general protection, which the EU needs almost as a point of leverage.

There is also the very important and valid point that there are plenty of EU nationals living and working in the UK, so any deal will work both ways.

The impact of Article 50 being triggered on the pound was not as great as many had expected. As I write on Thursday, just 24 hours after Mrs May’s speech, the pound is at €1.165, its highest level for almost a month and up three cents on the middle of March. At least we can hope now that clarity will come from the start of the process of leaving. Speculation can go on and on and for Brits wishing to buy in France the way forward should gradually become clearer. Or will it?

It is doubtful whether there will in fact be any major change to Brits wanting to own a home in France. Hopefully the healthcare system and how it is accessed will be a priority when it comes to working out terms. It is still very early days, so hope for the best and stick with your dream of owning a French home!

If you’re ready to buy in France, the Property Guides Viewing Trip app is the easy way to organise your trip, as well as find some beautiful homes.