Find homes in Normandy via our property portal.

950 years ago on 14th October, the Normans defeated the English army at Senlac Hill in Sussex. These days the traffic is the other way, as the British pop across the Channel to grab a piece of the lovely towns, pretty houses and beaches of Normandy

Back in 1066 the voyage across the English Channel was a serious affair, especially when taking 10,000 men in armour and 3,000 horses with you, as William the Conqueror did. These days you just pop onto a ferry at Newhaven or Portsmouth (both just an hour or so from London) and six hours later you’re enjoying one of the prettiest and greenest parts of France.

It’s so much easier to chuck your things in the car and drive onto a ferry than try to stuff it into a Ryanair overhead locker!

Of course this isn’t the first time the British have been back, and the past 950 years have mainly been about friendship and support, especially in the D Day landings during the Second World War, commemorated in monuments and museums all over the region, and still appreciated today

Nowadays Normandy is one of the most popular tourist areas of France. For a start it is so easy to get to. After crossing the Channel – and isn’t it so much easier to chuck your things in the car and drive onto a ferry than try to stuff it into a Ryanair overhead locker! – you have only to drive a short distance to find yourself in one of the delightful seaside towns such as Honfleur, Deauville and Trouville, or further inland Rouen. The Mont St. Michel, this huge medieval abbey, was built on rocks and is now a UNESCO World Heritage Site. 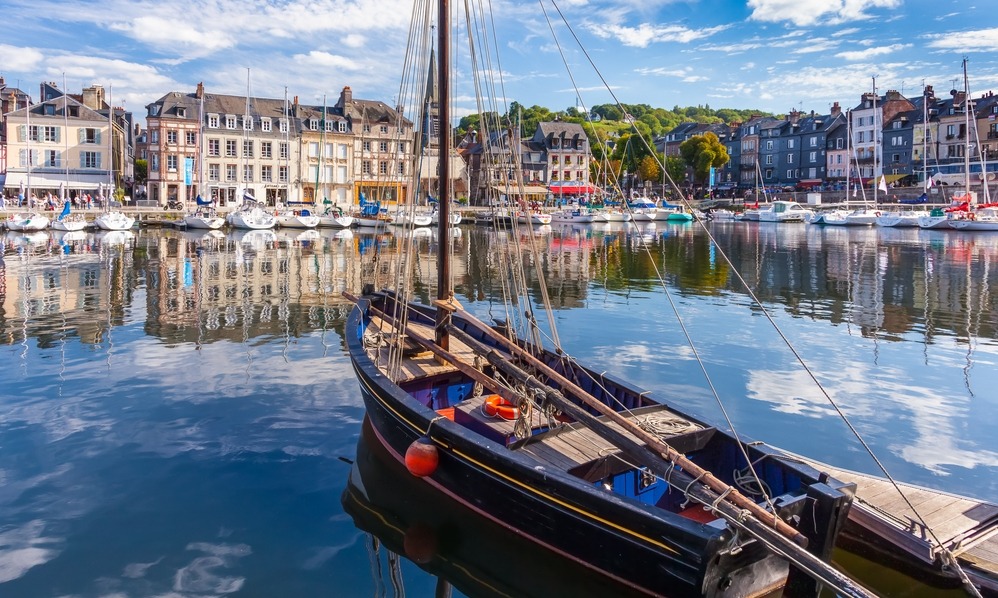 Normandy was beloved by painters, particularly the Impressionists. Renoir and Cezanne came to Normandy to visit Monet and many of his paintings are easily recognised when you visit the area. At Giverny you can visit the home of Claude Monet; the garden is magical.

Inland, Normandy is distinctly rustic especially in the rolling hills, hedgerows and sunken roads of the bocage. It’s famous for apples, cider, Calvados, Camembert and beef, and property buyers not only get to enjoy the produce, but also the views of orchards and meadows full of Charolais cows.

Property buyers not only get to enjoy the produce, but also the views of orchards and meadows of Charolais cows.

The beaches and cliffs in Normandy tend to be gentle, sandy and beautiful, reminiscent of Dorset and Cornwall in many ways. Some buyers might be put off by the climate, which is certainly cooler and wetter than the south of France, but the cold of winter is tempered by the Gulf Stream, and on the whole temperatures average at least a couple of degrees higher than southern England.

For property buyers, Normandy has always been a top destination for the British. It is a huge area equivalent in size to all the southern counties of England combined, from Kent to Cornwall. Much of it is just a couple of hours drive from Paris, making it a popular option for Parisians’ second homes. You can see it in the glamour of towns such as Deauville; linger at a pavement café and watch the Porsches and Jaguars gliding by! Deauville is famous for its horse racing, while Trouville has its casino. That has helped push the price up, and you will need to spend €400,000 to €800,000 for a good-quality apartment in Deauville. Honfleur is a working fishing port with some beautiful seafront properties, and the joy of Normandy is in exploring for the loveliest seaside town.

Properties near the coast are naturally more expensive but just a little further inland, prices remain very competitive. A budget of under 100,000 will get you a country cottage that might need a little TLC, while €300,000 will get somewhere really special.

So close and yet so different, it is funny to think that a different language, culture and lifestyle is waiting for us across such a narrow bit of sea.