The fabulous Bourgogne-Franche-Comté region is like a miniature version of France, jam-packed into a tenth of the area of the entire country. In this guide, you’ll find out why so many expats have found their chez nous in this stunning and multi-faceted region.

The Bourgogne-Franche-Comté boasts vast mountain ranges, rolling fields and world-class wines (including Champagne, Chablis, Alsace, Beaujolais and Burgundy). The region includes famous rivers like the Loire and the Seine and thousands of square metres of dense forests. There’s lots to admire building-wise too, with historical sites, impressive chateaux and elegant cities.

With Île-de-France (including Paris) on its north-western flank, and Switzerland to the south-east, this area’s well connected. There’s easy access from the UK, and the location is crisscrossed by motorways and TGV (high-speed train) routes.

Over much of Bourgogne-Franche-Comté, you’ll find a continental climate with cold winters and warm summers. Snowfall is frequent in the mountainous parts of the Vosges, Jura and the Morvan. Day-to-day costs are reasonable and the quality of living is generally high, although highly rural areas like the Morvan are sparsely populated. This is more than compensated, however, by the authentic way of life and stunning landscapes.

As for housing, there’s plenty of affordable property in beautiful towns like Besançon, metropolitan cities such as Dijon, and sleepy outposts like Vézelay, one of the most beautiful villages in France.

Agriculture and tourism-based economies thrive in this region, and there are plenty of seasonal jobs and full-time employment in the wine-growing and gastronomy-related sectors.

If you love food, then you couldn’t pick a better place to call home than Burgundy. From truffles to snails, and Charolais beef cattle to comté cheese (which closely resembles cheddar), this area is considered the ‘stomach’ of France. 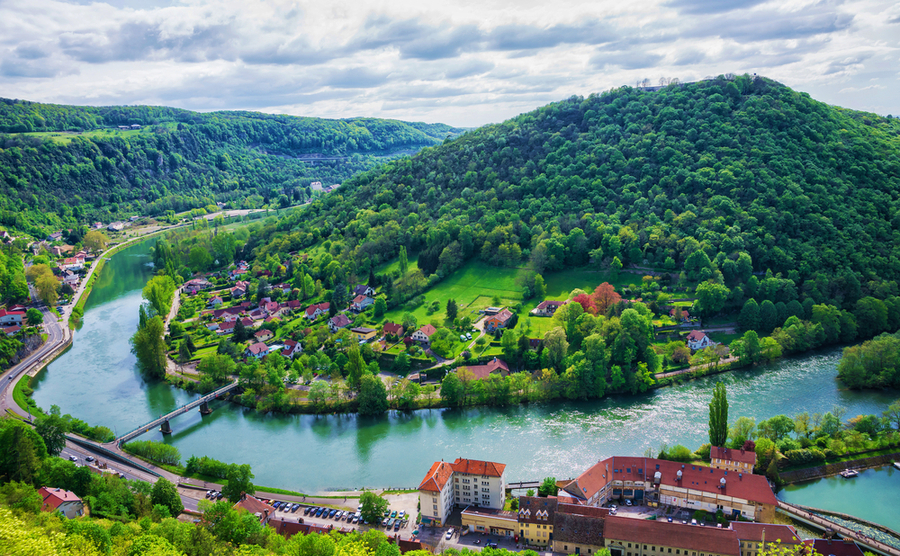 A taste of traditional France

If you’re looking to settle in an authentically French location with stunning architecture, Bourgogne-Franche-Comté is a prime location. Perhaps consider the spectacular yet little-known city of Besançon with its magnificent citadel designed in the 17th century by French architectural genius, Vauban. A listed UNESCO world heritage site, it was constructed on one of the seven hills that encircle the town, offering a spectacular view from its ramparts.

Besançon’s history as the capital of watchmaking in France has made it home to innovative companies in the microtechnology, micromechanics and biomedical engineering sectors, offering plenty of scope for employment. House prices? Expect to pay around €2,000 per square metre.

Aside from the citadel at Besançon, Bourgogne-Franche-Comté boasts no less than seven UNESCO world heritage sites. Discover the futuristic Ronchamp Chapel built by modernist architect Le Corbusier, or for something a little older, consider the Neolithic site of Chairvaux-les-Lacs. This astonishing site showcases the vestiges of fifty settlements dating from the Neolithic to the Bronze age, together with remnants such as tools, drinking vessels and even food remains. Whether or not you’re a history buff, you’ll love the authentic vernacular architecture of Bourgogne-Franche-Comté, full of atmosphere and historical interest.

Mountain sports and the outdoors

While Bourgogne-Franche-Comté’s mountains are modest in Alpine terms, they still boast 129 kilometres of pistes and 120 ski lifts. What’s more, the region is a paradise for walkers, with three regional and one national nature parks, and twenty nature reserves.

To lose yourself in nature, you can discover the splendour of snowy peaks and ramble across vast plains with hardly a soul in sight. What’s more, well-marked footpaths offer 18,000 kilometres of trails, including a portion of the long-distance Saint-Jacques de Compostelle pilgrimage. If you’re thinking of living here, why not consider Avallon? An attractive town at the gateway of the Morvan national park, you’ll discover cobbled streets, fine public parks and balconied townhouses, with property prices averaging a mere €1,000 per square metre. 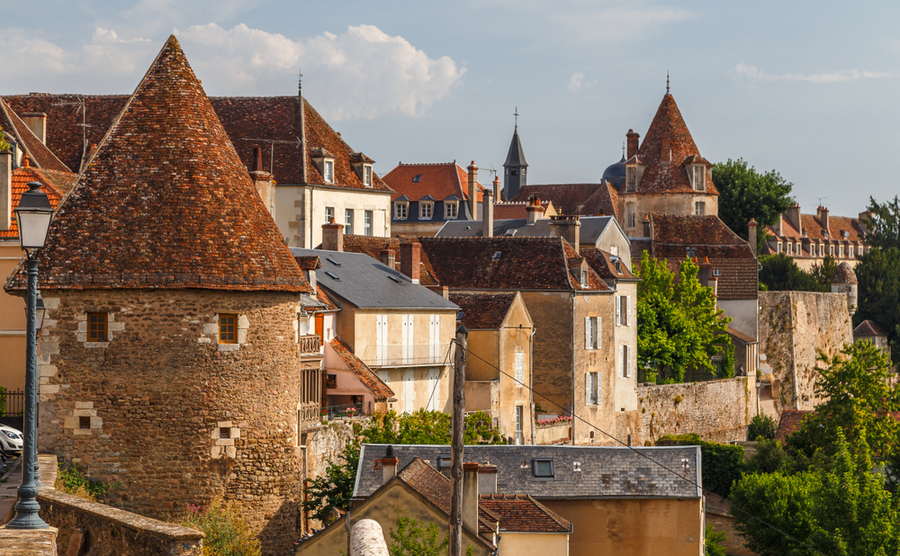 The canals of Burgundy are a network of more than a thousand kilometres of waterways constructed between the 17th and 19th centuries to transport goods like timber and wine. They also link the Seine with the Rhone, and thus the English Channel with the Med, enabling marine traffic to bypass the treacherous Bay of Biscay.

If you’re keen on fishing, picturesque canals together with wide, tranquil rivers are teeming with freshwater fish such as trout and carp as well as langoustines and, yes, frogs. Hire or buy your very own cruiser, take the helm and meander among grand chateaux, picturesque gardens, medieval villages and Roman towns all the while sipping on world-class wines. Consider basing yourself in Migennes, a local hub for all things boating (average property price €920 per square metre), perhaps with a hundred metres or so of river frontage to moor your vessel.

Getting and living there

This region is highly accessible, as it’s crossed by several motorways including the mythical A6 and A7, and you can reach it easily by car from Calais via the A26 and A4. There are direct trains between Paris and Dijon, as well as Dijon and Lausanne in Switzerland. If you’re flying, either Paris or Lyon is your best bet.

Post-Brexit, it’s not as easy as it once was to settle in France, but it’s simple enough to apply for a long-stay visa, entitling you to stay in France for more than the 90 days per year permitted to UK passport-holders. Plenty of Americans, Australians and Kiwis have taken this route. Visits to France for up to 90 days are also possible for working breaks, although you’ll need a temporary work permit. 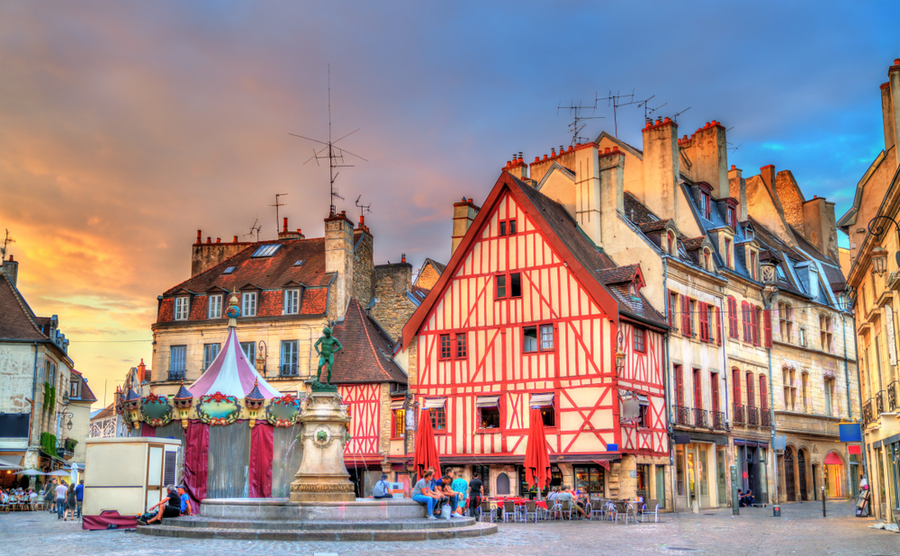 Considering buying a property here? Why not take a look at the pretty town of Dijon, home to the famous mustard and the equally well-renowned, blackcurrant-based Cassis. Expect to pay around €2,400 per square metre for a home, such as a gorgeous half-timbered property flanking the winding streets. And if you’re thinking of working or starting a business, you’ve made an excellent choice. This city is one of the 8th best places for entrepreneurs in France. Or, you could consider charming Bourg-en-Bresse, home to the tastiest poultry in France and an eponymous blue cheese. Homes here cost in the region of €1,700 per square metre.