Bastille Day: the most important day in France

If you were in France last weekend and enjoyed all the Bastille Day parties, you might be wondering what all the fuss was about. Let me explain…

Bastille Day on 14th July is a French national holiday often called “La Fete Nationale Francaise”. It commemorates the storming of the Bastille prison in Paris, which led to the birth of the French Revolution in 1789 and thus the end of the French monarchy. The aristocracy at this time in France were the epitome of wealth and arrogance, and the Bastille prison was used to incarcerate anyone challenging the King and Queen.

The word Bastille actually comes from the ancient word “bastide” meaning a fortress as well as apparently a Provencal word “bastida” meaning built. In 1789 it was certainly an imposing fortress, even though there only a handful of prisoners in it at the time. That summer France was still suffering the economic ill-effects of helping the colonists in the American revolution, while itself being inspired by that rout against the British crown: “intoxicated with liberty and enthusiasm”. The attack on the Bastille cost the lives of 98 attackers and around seven defenders, but it led to the end of the French monarchy and the execution in 1793 of King Louis XV1 and his wife Marie Antionette. Ironically the revolutionary leader of the attackers, Camille Desmoulins, didn’t last much longer, following them to the guillotine a year later after he fell out with Robespierre. 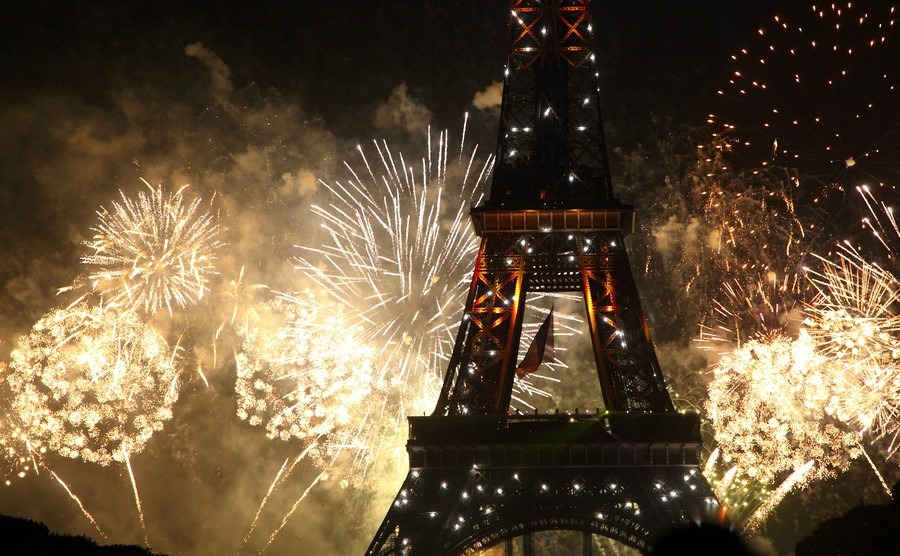 The French national holiday on 14th July was actually only declared in 1880 but has been celebrated with gusto ever since. Every town and village celebrates the birth of the French Republic with parties, live music, outdoor meals, fireworks and dancing.

This year coincided with the visit of President Trump to Paris and the French put on an impressive display along the Champs Elysees. There was an element of one-upmanship against the British too, with much mention of the US being France’s oldest ally and harking back to the same revolutionary beginnings. Well, can you blame Macron?

To ensure you are living in France by Bastille Day 2018, download our France Viewing Trip app. It will help to keep your property hunt organised and set you on the road to own French Revolution.

Many villages actually start their celebrations on 13th July to avoid clashing with the larger towns and cities which draw in huge crowds with their competitive firework displays. Our own village with a population of little over 1,500 swelled to more than 6,000 as the maire hosted a communal meal in the main square after which the firework display, accompanied by an impressive range of music, had us all wondering just how such a small community managed to put on such a fine show. But that is the French for you: intensely proud of their heritage and republic.

Interestingly, it is not only in France that Bastille Day is celebrated. There are many French folk living and working in London who, not to be outdone, hosted their own celebrations and many French overseas territories do the same. Although A deeply French occasion, the British are very much welcomed and we were made to feel as though we had an honorary French title.