Shopping and supermarkets in France: what do you need to know?

Shopping and supermarkets in France are one of the country’s great pleasures. You’ll find they’re generally stocked with high-quality goods, even in chain stores. Opening times do vary from in the UK, and you’ll certainly find it’s a slower and more sociable pastime – especially in rural areas.

Opening times for shopping and supermarkets in France

Shops in France are usually open on Tuesdays to Saturdays from 9am to 7pm, with a break from 12pm to 2 or 3pm for lunch. You will soon discover that not many shops are open on Mondays in France. Smaller shops can only be open for those five days a week.

However the larger supermarkets, hypermarkets, and department stores in the larger towns and cities are generally open throughout lunchtime and on Sunday and Monday mornings. These will generally be open from around 8.30am to 8pm.

You will soon discover that not many shops are open on Mondays in France.

Opening hours on Sundays will generally depend on particular shops and specific areas, but you will generally find the local baker, or boulangerie, is open throughout the morning for everyone to get their daily bread on their way home from church. Sunday opening in other shops, contrarily, is more likely to be in the afternoons, after the traditional church service times. Shops were not traditionally allowed to open on Sundays. However, a law passed in parliament in 2009 allowed shops to open in the important tourist areas and the major cities of Paris, Lille and Marseille. You may also find shops open during the Christmas shopping season, alongside the specialist Christmas markets.

Much of the local shopping is focused around the French markets – a historical tradition that still stands the test of time in France. It is one of the unique pleasures of life in France to stroll around the various markets, eyeing up the fresh produce, or hunting for a bargain at a flea market or brocante stall. The joys of a well stocked local market and vintage shopping in the local area have become popular throughout the UK in recent years. In France, this form of shopping has always been popular and has been an integral part of the lifestyle for centuries.

It is one of the unique pleasures of life in France to stroll around the various markets, eyeing up the fresh produce, or hunting for a bargain at a flea market or brocante stall.

It’s worth noting that local pharmacies follow the same opening hours as other shops. They do not traditionally stay open all hours. That said, in the towns there is likely to be at least one pharmacy that stays open in the evenings and on Sundays. There are also a few 24-hour pharmacies to be found in the larger towns and cities. This is worth factoring in when you are planning the most convenient areas for shopping and supermarkets in France where you live, in particular if you have any specific medical requirements.

Get in touch with expert estate agents, currency specialists and lawyers – your ‘Golden Three’ – today to kickstart your buying journey.

Shopping and supermarkets in France are very sociable, particularly in rural areas. It is normal to enter a local shop and say ‘bonjour’ to both the shop owner and the other customers. The French usually keep a relatively personal relationship with their local shopkeepers, prompting a better service. 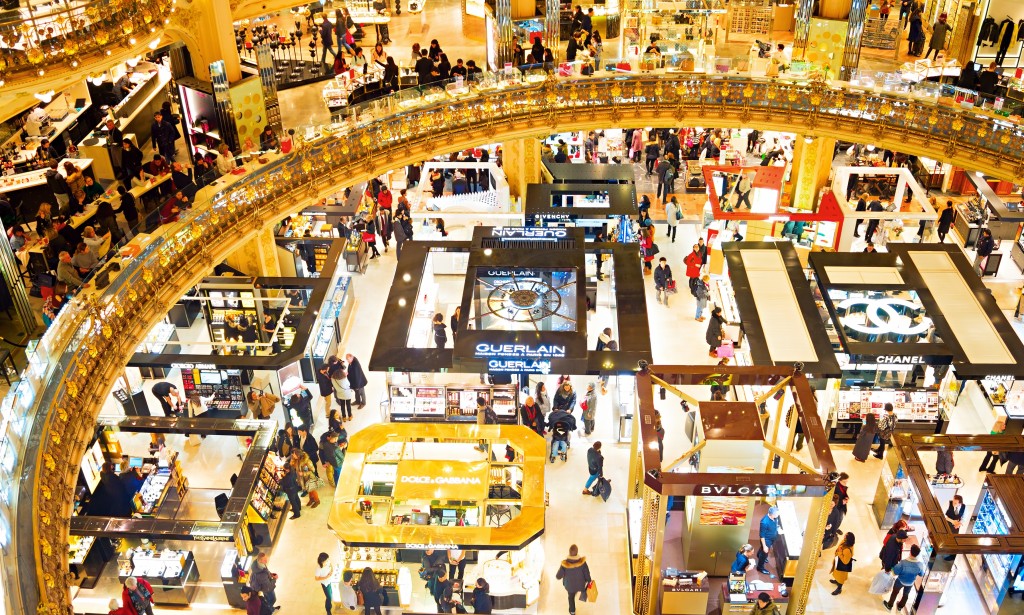 Shopping and supermarkets in France are generally much more sociable

Types of shopping and supermarkets in France

You’ll unsurprisingly find all sizes of shops in France. At one end of the scale are the large hypermarkets (hypermarchés), which are essentially very large supermarkets. According to data from Que Choisir, Monoprix is France’s most expensive supermarket. The two main brands, Auchan and Carrefour, are more equal, with Auchan a little more expensive. E. Leclerc is by far the cheapest.

Next up are the grandes surfaces, the French equivalent of ‘big-box stores’. You’ll find them in most parts of the country.

Of course, of most interest to expats, however, are the independent shops. And there’s a wealth of them around. You’ll find many towns have a family-owned boulangerie (bakery), boucherie (butcher), épicerie (grocer), and, naurally, a pâtisserie selling delicious cakes.

Likewise, you will also see the pharmacie (pharmacy), marchand de vins (wine merchant), tabac (tobacconists) and magasin de bricolage (DIY shop). If you spot a librairie, don’t be confused – it’s a bookshop, not a library (bibliothèque).