Where's the best place to buy property in Northern France?

How would you like all the best of French lifestyle and culture while just being a short hop away from England? Northern France offers precisely that, plus generally lower property prices.

Whether you choose the rugged coastline of Brittany and Normandy, or the picturesque, flat countryside of Picardie, it’s all available just a short ferry ride, a pretty train ride or drive from the Channel ports.

Click here for an introduction to the trusted estate agents, currency specialists and lawyers you need for a successful purchase in France. 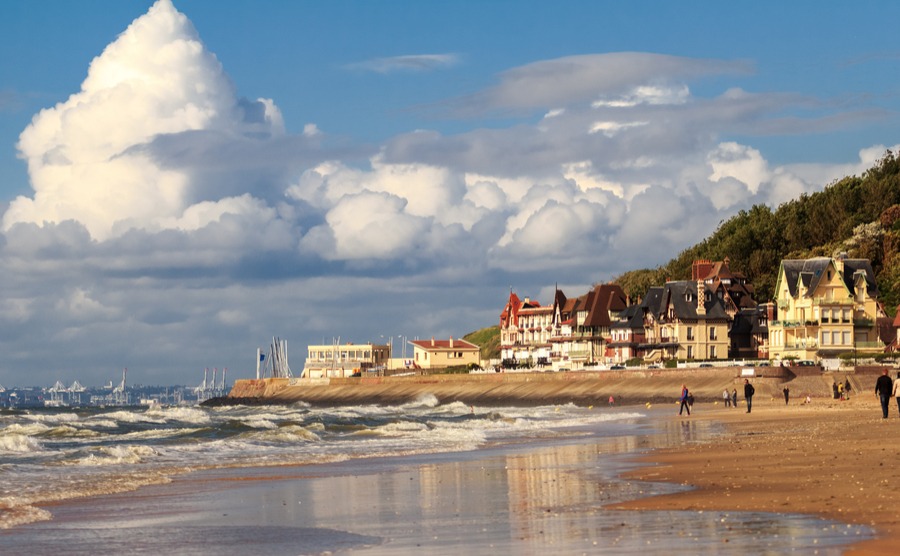 This is the closest region of France to the UK and thus traditionally popular with UK buyers for holidays and second homes. In fact, about 20% of properties here are second homes. Brittany is seen as one of the most attractive areas of France, thanks to its coastline and beautiful countryside.

Normandy is known for its culture, of course, its coastline particularly enjoyed by the Impressionists, such as Renoir, Cezanne and Monet. There’s a long history of battles too, from William the Conqueror sailing from here in 1066 (and commemorated in the Bayeux Tapestry) all the way to the 1944 Normandy landings.

There are about 400 miles of seaside in these regions, with cliffs, both sandy and pebbled beaches, as well as some wonderful forest areas such as Compiègne. It’s not the Côte d’Azur, of course, but then the properties cost 80% less here!

Property prices in Brittany are lower than in most other parts of France; this is particularly true for those located to the West or the very North, in either Finistère or Côtes-d’Amor. Properties are a little more expensive in Morbihan. The most fashionable resort in Normandy is Deauville, an expensive playground for rich Parisians.

Brittany may be close to the UK, but its climate is quite different. The warm winds from the Gulf of Morbihan tend to create mild winters. Alongside the buoyant property market, strong transport system, and the abundance of small villages within easy reach of the coast, the area is ideal for a family holiday home.

There are about 400 miles of seaside in these regions, with cliffs, both sandy and pebbled beaches, as well as some wonderful forest areas such as Compiègne. It’s not the Côte d’Azur, of course, but then the properties cost 80% less here! It does get a fair amount of rainfall, but there is also plenty of sunshine and in the summer, it feels like an almost Mediterranean climate. 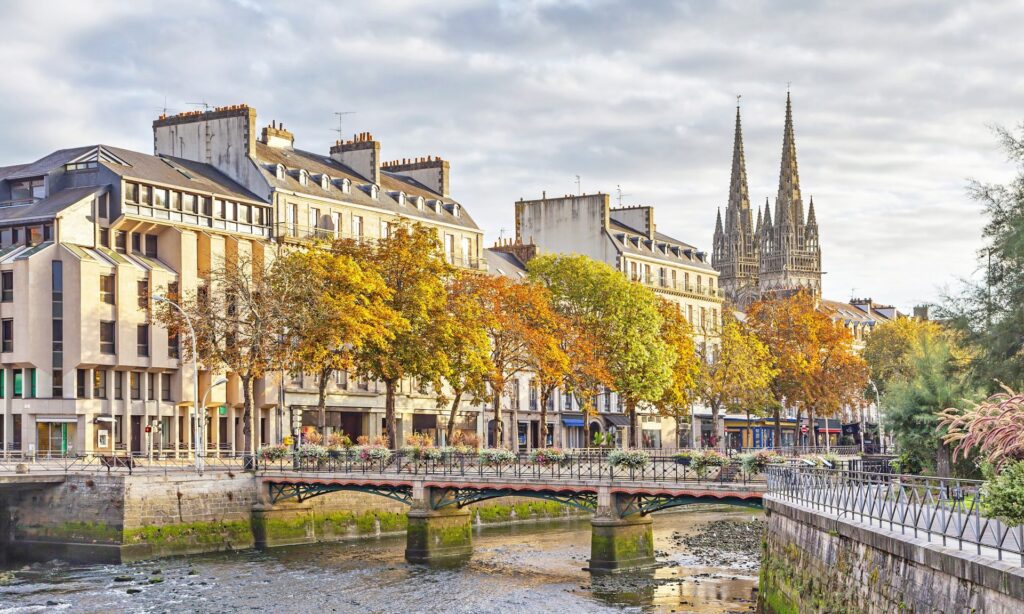 The bridge over river Odet in Quimper – ancient capital of Cornouaille, Brittany’s most traditional region.

The good news for those buying property in North France is that most areas, including this region, are easily reachable. Brest, Nantes, Dinard, and Caen are all accessed from airports across the UK by Ryanair, Easyjet and Air France. The rail network is also strong from the rest of France – especially Paris, which can be reached from the UK easily via Eurostar. Access between the towns is also good, thanks to the high speed TGV service.

Ferry services serve the ports of Saint Malo and Roscoff in Bretagne, and Dieppe and Le Havre in Normandie. Bretagne Ferries, Condor Ferries, Transmarche Ferries, Hoverspeed Fast Ferries and P&O are some of the more well-known lines that take people to France from Portsmouth, Newhaven and other towns in the UK. Access to the region by car is easy, thanks to the huge number of Autoroutes and Route Nationale roads into the region from the rest of the country, including the A11 from Paris.

The Hauts-de-France, previously known as Nord-Pas-de-Calais-Picardie, run across the Belgian border in the north and the English Channel in the west. It is within commutable distance from the UK, with a relatively reasonably priced housing market. Even in Lille, the capital of the region and France’s fourth largest city, the average property price here is around €250,000, but a two bedroom house can be found from around €70,000. Unlike Bretagne, the proximity of the Hauts-de-France to the UK means it does indeed share a much more similar climate – especially compared to the rest of France.

It is within commutable distance from the UK, with a relatively reasonably priced housing market – a two-bedroom house can be found from around €70,000

Lille is home to many must-see sites to visit, such as the city cathedral and the Palais des Beaux-Arts de Lille (the largest museum in France outside Paris), as well as plenty of botanical gardens. Next door to Lille, you find the town of Roubaix; this is also well known for its art history, culture and architecture.

Le Touquet remains ever popular with both Parisians and British visitors. This is a great area for investment property in North France, due to the relatively short transport times from Paris and even the UK.

This area is popular thanks to the beautiful Hesdin forest, the walled town of Montreuil, not far from Calais, that was home to Victor Hugo, and, of course, the battle site and museum of Agincourt. There are numerous memorials for the Battle of the Somme around this region, as well as the tallest Gothic styled cathedral in France, the Cathedral of Amiens.

Interestingly, there is little price difference between an apartment and a home in most areas, mainly because of the relative shortage on the property market. A home is eminently affordable compared to the other side of the channel, and is within an easy train ride of both London and Paris, as well as Brussels.

This region can be reached easily by air, with flights to Beauvais, Lille-Lequin and Le Touquet from several cities across the UK provided by Ryanair, Air France and Lyddair.

The Eurotunnel runs from Dover to Calais, while Lille can be reached from London in two hours on the Eurostar.

The P&O ferry route from Dover to Calais is one of the most popular between the two countries, with SeaFrance, L&D Lines, Norfolkline and Hoverspeed also running routes across the English Channel.

Paris is, of course, the capital of France, and thought to be one of the world’s greatest cities. Yes, it is expensive – but the surrounding suburbs, especially further out into the Île-de-France region, are less so. Recent stats suggest that this is the most popular region for property in North France with Britons, with 21,000 residing here. 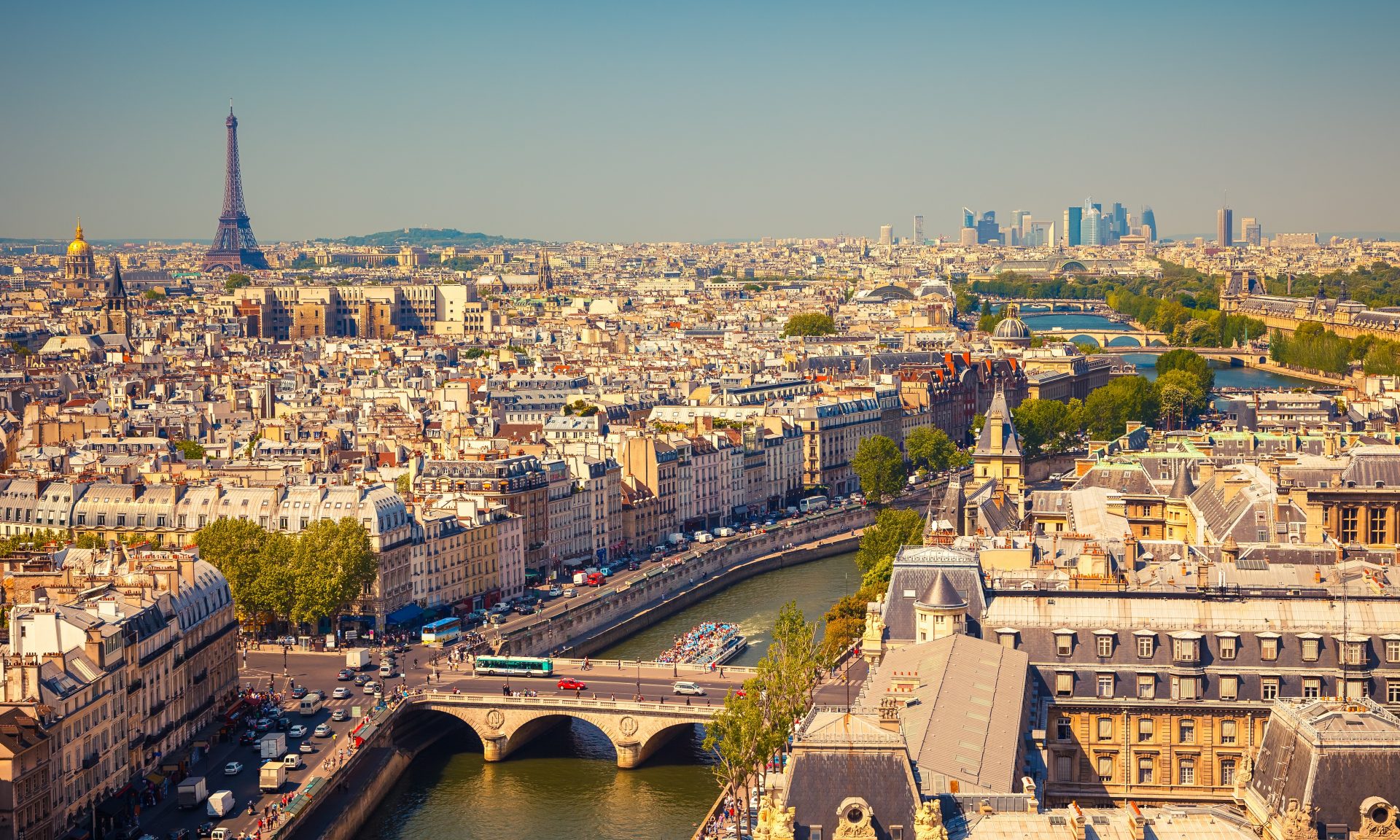 Instantly recognisable, Paris is France’s capital and a global centre of fashion, art and culture. It’s a popular choice of location to buy property in North France.

Paris is split into 20 arrondissements municipaux, spiralling clockwise from the inside out and named by number. You can find wonderful apartments across the city, typically situated in substantial old buildings with wrought iron railings. There are also plenty of modern villas outside the inner city. A two bedroom apartment in suburbs such as Montmartre in the 18ème (still a cool €1.14 million), or the thriving 9ème, will generally be around half the price of one in the centre of Paris (around €2.6 million).

Further out into suburbs, the areas of Neuilly, Boulogne, Saint-Cloud and Levallois to the west have similar prices and are somewhat peaceful, while cheaper prices for properties have helped to ensure that Versailles has an identity outside its royal history and the Treaty signed there in 1919. Houses here offer more space and a garden for the same prices as some central Parisian apartments.

Paris is an established centre of art, publishing, high fashion clothes and jewellery – all of which contribute to its well-earned nickname of the ‘City of Love’. It is also home to more than 8,000 foreign companies, including Esso, IBM, Kodak, Honda and Proctor & Gamble. Almost all property in the centre of Paris dates back to 19th Century; most people live in apartments, and there are few houses.

Paris’s international airports, Charles de Gaulle Airport and Orly Airport, are all served by numerous airports across the UK, thanks to Air France, Flybe, EasyJet and British Airways. Eurostar operates regular services to Gare du Nord from London St. Pancras, which take just under two and a half hours.

Access to Paris from the main ferry ports in Le Havre and Calais is very straightforward; these are served by P&O, SeaFrance and HoverSpeed.

Road access via the Channel Tunnel is also fairly simple, with an express coach service from London Victoria to the main gare routiere (bus station).