Could zero taxation lure you to an Italian village?

You may love the idea of living in Italy but have your sights set on Puglia, Tuscany or Lake Como. But could you be tempted to a more remote Italian area if your taxes in Italy were abolished? The government is considering a proposal to offer serious tax incentives to retirees buying in some Italian villages that are short of people.

The project, named Zes-Aas, has been proposed by Professor Alberto Brambilla. He is a pensions expert and economic adviser to the ambitious new deputy prime minister Matteo Salvini. Brambilla’s plan is for 600,000 Italian and foreign pensioners to transfer their tax residence to three specific southern regions. Why would they do that? Because once resident there for six months you’ll be exempt from paying income tax for 10 years.

Once resident in your Italian village for more than six months you will be exempt from paying income tax for 10 years.

British people moving to Italy already benefit from some lower taxes. The Italian equivalent of council tax, called IMU, has been abolished on a person’s primary residence (except luxury properties like castles). Even rubbish collection charges are low, especially in the countryside.

Boost to the economy?

The reason for the plan is that you would be contributing to the local economy in other ways. That includes spending money on building services, home renovations, gardening, cleaning and all the other property related expenses. Then there are the local goods and services, the restaurants, shops, bars, taxi services and other treats that well-heeled retirees tend to enjoy. All will provide work for local people who will, in turn, pay taxes. Professor Brambilla calulates it could all raise national GDP by 1%, an astonishing figure.

If you’re buying in Italy in the next six months, register for Your Overseas Home. It’s a free, boutique event tailored for serious property buyers. Speak to solicitors, estate agents and currency specialists.

But maybe not entirely unrealistic. Portugal, for example, attracts huge numbers of French retirees because of its low-tax schemes. Of course, such fiscal benefits are just the icing on the cake. The biggest benefit would be to those from abroad or in Italian cities who’d love to retire to a peaceful country village. Great weather, superb food, an affordable home, and more money in your pocket all await.

The three pilot regions being suggested are Sardinia, Sicily and Calabria. It’s possible to enjoy a peaceful retirement in a quiet village here, with a mild southern climate. These are also regions with beautiful coastlines and low inland property prices.

For a village to qualify for the scheme, Brambilla has indicated that they will have to meet certain requirements to satisfy the needs of retirees. These include efficient rubbish collection and a healthcare system in line with wealthier areas, such as Emilia Romagna, Veneto and Lombardy. They must, however, have experience depopulation of at least 20% in the last decade. Each village must also have a population of under 4,000.

So, where has everybody gone?

Nearly 2,500 rural Italian villages have been classified as perilously depopulated. Some are semi-abandoned while others have become ghost towns. As younger people have moved to larger towns and cities to find work, so the birth rate has fallen in a self-perpetuating downward spiral. Working on the land is no longer the sociable (if hard) choice of old, as technology has changed farming.

This proposal hopes to take advantage of the spending power of foreign residents. Young locals will learn languages and create the small local businesses and micro-businesses to serve them. It’s not the first scheme put in place to encourage home buyers. Others have included Italian homes for one euro, and the Year of the Village promotion.

Why retire to an Italian village?

If you’re among the millions of British people who enjoy TV shows like Countryfile, or Escape to the Country you may yearn to get away from the traffic and noise of town life. The UK, and England in particular, has a population density far above Italy’s. Yet it won’t have escaped your notice that both price and weather are against country-home lovers in the UK.

A popular location is the edge of a village; convenient for the countryside yet also part of a friendly community. This type of location in the UK can be expensive, but is available at reasonable prices in Italy.The rainy weather can also put a dampener on your plans to potter in an English garden and enjoy country walks. The sunny weather in southern Italy enables you to spend more time outside, exploring new places.

Italy’s villages have unique historic architecture and character too. You will still find quality crafts and traditions still being practiced – after all, not everyone has moved to the city – and these villages are part of the Italian landscape where rural music, dances, local recipes and festivals have been passed down through the generations. You will often hear British buyers comment that it is like stepping back in time, to when they were children and could safely explore the fields and woodland. A time when people helped their neighbour and shared fruit and veg from their garden.

Too young to retire? Want a holiday home but worried about the cost? Why not pool finances and buy with family? Explore our guide, Buying Abroad with Family.

A tip from Spain

There’s huge goodwill in seeing these preserved as part of the country’s identity. And again, there is international evidence that Professor Brambilla’s plans could work. Southern Spain had a similar problem in the latter part of the 20th century. Yet the influx of British, Scandinavian and other international expats revived its “white villages”. It made plenty of money for the new residents too, in the long term, especially those who made the move early.

The regions of Sicily, Sardinia and Calabria all have plenty of pretty villages, unspoilt countryside and amazing coastlines to explore. Which one is your favourite? 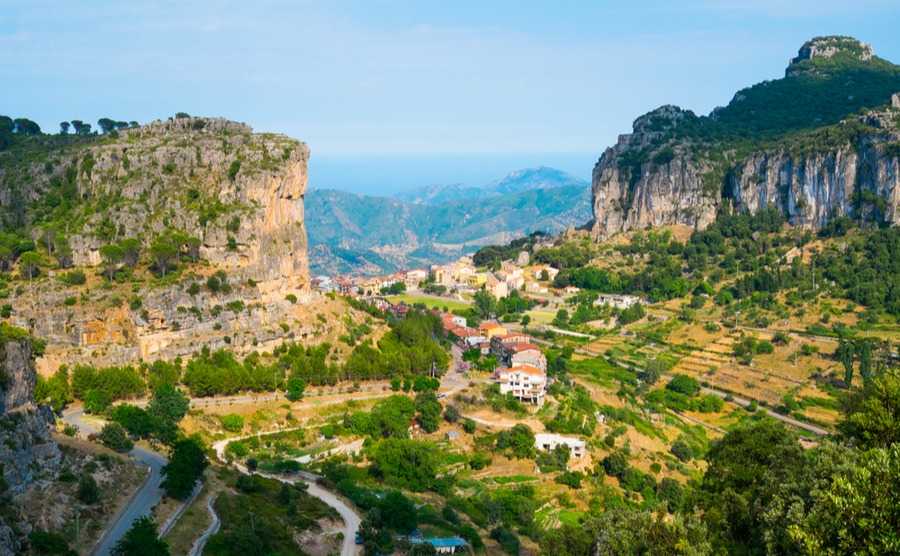 Sardinia has roughly 1.6 million inhabitants and is the least densely populated region of Italy. The two main urban centres are the Cagliari in the south, and Sassari in the north. However, two other provincial capitals that are developing fast are Oristano and Nuoro. The majority of the population live in small towns and villages situated away from the coasts, with a typical village having between 1,500 and 4,000 inhabitants. In centuries gone by people moved inland due to pirate attacks along the coast. In more recent times, however, tourism opportunities near the sea have emptied villages. An insight into the inland villages of Sardinia can be found on The Sardegna Turismo website.

Check out some very affordable and attractive properties for sale in Sardinia.

Airports: Cagliari, Olbia and Alghero all have flights from the UK

Sicily is the largest Mediterranean island and the most populated. Hills and mountains cover it almost entirely, with the highest point being Mount Etna (3,261 m), in the east. The only wide valley is the fertile plain of Catania, along the lower Simeto River. Sicily’s long hot summers attract many tourists, and the Visit Sicilyofficial tourism website suggests some of the villages worth visiting. Among these are well priced properties to suit even the smallest budget. If you’re tempted, here are some of the Properties for sale in Sicily.

Airports : Catania and Palermo have flights from the UK 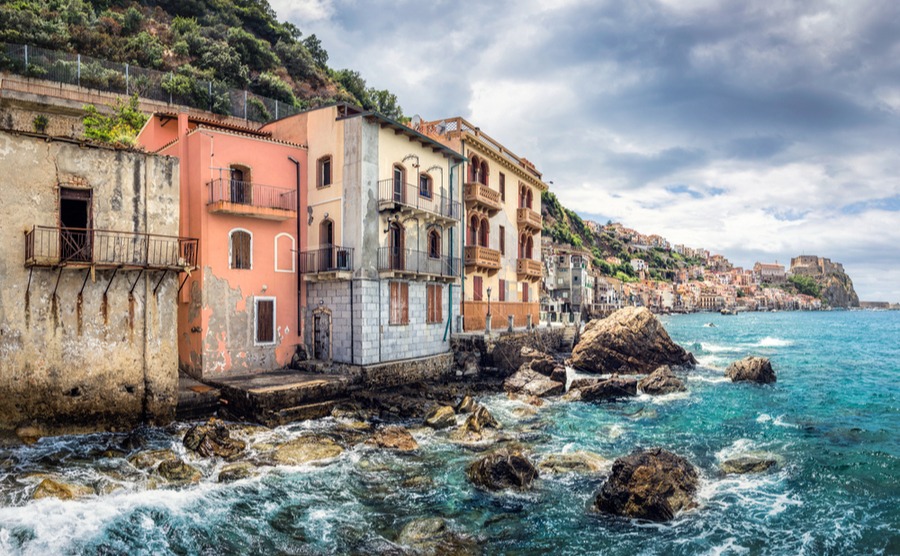 Calabria is at the toe of the boot of Italy. The crystal-blue Ionian and Tyrrhenian Seas lap Calabria and it is separated from Sicily by the Strait of Messina. The warm climate and 497 miles of coastline attract people looking for a cheap apartment by the sea. But it is Calabria’s wild and mysterious inland areas that offer some real bargains. This is a land of ancient settlements, full of lovely churches, monasteries, castles, palaces and towns where age-old traditions still survive. The National Parks of Sila, Serre, Aspromonte and Pollino are amazing places to explore nature and the mountain villages offer great opportunities to buy houses to restore.

You can find information about the towns and villages of Calabria on the Turiscalabria website.

See some real properties for sale in Calabria.

Airports: Lamezia Terme has flights from the UK