What a summer we have had in Italy. The summer heat arrived early and with it a feeling of optimism for better times to come. The sports teams did brilliantly, the sun shone, and shone, travel restarted and the celebrities arrived… Catch up with the news from Italy.

Thinking about moving to Italy? Make sure to download your Emigration Guide today. 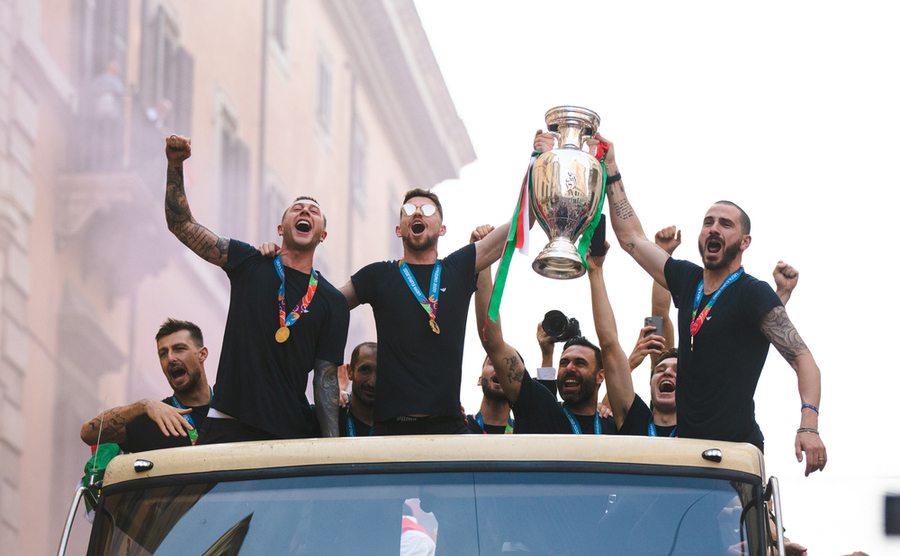 When you see fellow Italians going for their goals and winning, it raises the mood of the entire nation and reminds us that we can also achieve our dreams. It began with Italian rock band “Måneskin” winning the 2021 Eurovision Song Contest. Now, we are waiting to hear which Italian city will get the honour of hosting the contest next year. Bologna, Milan, Pesaro, Rimini and Turin are all in contention.

Not to be forgotten, are the Italian Olympians and Paralympians, who inspired us with their sporting achievements. They won 10 gold, 10 silver and 20 bronze medals, setting a new medals record for Italy at the Olympics. At the Paralympics they achieved a staggering 69 medals.

Make sure you get the best possible mortgage for your Italian property by talking to your recommended Italian mortgage specialist.

Wealthy property buyers have continued to buy homes in Italy this summer. Good transport links to the rest of Europe and the world have made the northern regions an attractive option for relocating business people. With cities such as Milan, Turin, Genoa and Bologna offering a buzzing business scene and stunning scenery close by, you can see why people are making the move here.

The most economically successful regions, with their cities and tourist appeal have also seen some of the highest property sale prices. The highest average price for property in Italy as of August 2021 was registered in the region of Aosta Valley (€2,566 per square metre), followed by Liguria (€2,440 per square metre), and Trentino South-Tyrol (€2,504 per square metre). That’s not to say there aren’t also bargain prices to be found in each of these regions. 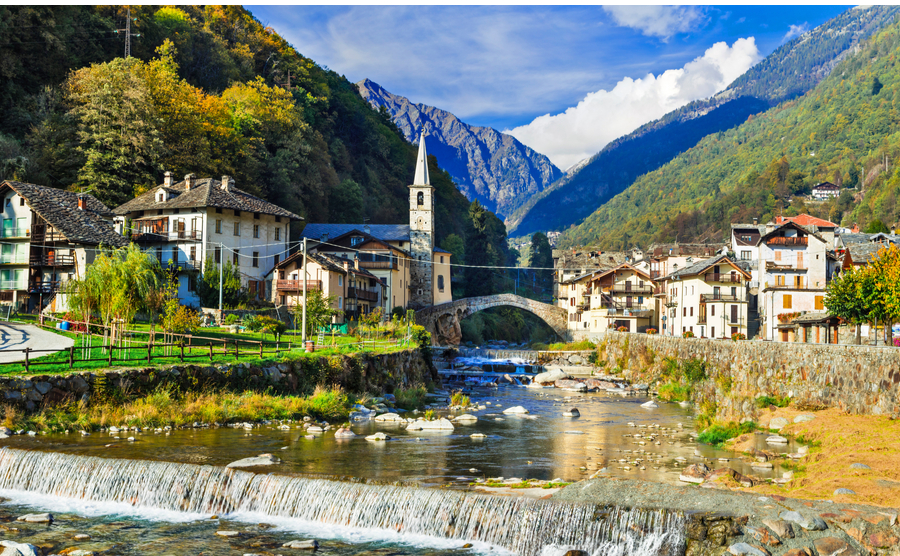 The village of Lillianes in Valle d’Aosta, northern Italy

It isn’t just the cities that are selling property. With many more people able to work from home, people are also looking at buying properties out of the city. Some are considering relocating, and others are buying second homes to enjoy more outdoor space in their free time.

To help rejuvenate the villages there are some real bargain properties on offer. Once again, the Lazio region is the star of the initiative that offers houses for €1. After the small towns of Patrica and Maenza, it is the turn of Santi Cosma and Damiano, in the province of Latina. 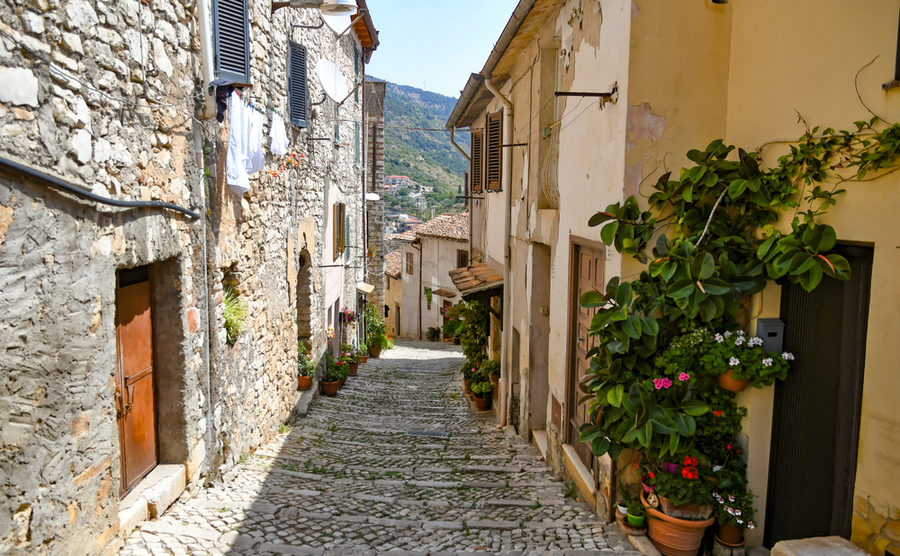 Maenza, one of the villages offering €1 homes (Giambattista Lazazzera / Shutterstock.com)

As with other initiatives throughout Italy, from Piedmont to Sicily, the buyers of the properties for sale in Santi Cosma and Damiano must agree to renovate the buildings, investing in a cultural and social enhancement project.

The objective of the municipal administration of Santi Cosma e Damiano is to secure the abandoned buildings in the historic centre; and at the same time to combat depopulation. They hope to redevelopment the urban centre and encourage accommodation and commercial activities.

The Municipality of Santi Cosma e Damiano is home to under 7,000 people and is a small town of medieval origins. It is the southernmost municipality in the province of Latina along with Castelforte. The town’s scenic location sits between the mountains and the Gulf of Gaeta. Nearby is the “Parco Naturale dei Monti Aurunci” and Just 15 minutes’ drive away is the sea at Marina di Minturno.

The nearest airport is at Naples which is 1 hour 20 minutes’ drive. Although in the Lazio region, Rome is 2 hours drive away. This isn’t a ghost town, there are schools, shops and restaurants. They just want to see buildings restored and their community grow. Local people love keeping the old traditions alive. On the occasion of the carnival, in addition to the parade of floats, the sausage festival takes place and, for nature lovers, there is the Mountain Festival .

In the highest part of Santi Cosma e Damiano is the hamlet of Ventosa, where you can see a beautiful medieval tower and the remains of watch towers. The handicraft of basket weaving has been well preserved here. Many ancient buildings were destroyed in World War II, however, Palazzo Tibaldi and the church of Santi Cosma e Damiano remain visible. More information and contact details are on the Municipality of Santi Cosma and Damiano website

Italy scorched in the heat

For Italy, summer 2021 was the sixth hottest and driest on record. For the southern regions, most directly affected by heat waves, it was the second hottest summer. Puglia, which normally would reach 35C, saw the temperature gauge go over 40C.

It has also been a dry summer across Italy. On average the rainfall has been 32% less than historical records. The North-East and central regions, particularly noticed the difference. The greatest problems due to the scarcity of water were recorded in southern Piedmont, Emilia Romagna, Central Italy and Sardinia.

The good weather has continued throughout September, making this a great time to view properties. In the first week of October the forecast is around 27C in the south, and around 22C in central and northern regions, but with occasional storms.

In July and August 2021 the number of Italians choosing to holiday in Italy broke all records. According to a survey by Cna Turismo e Commercio, they reached 23 million in total, against 17 million in 2020 and 18 million in 2019.

Thanks largely to the Green Pass allowing EU citizens to travel to Italy without self-isolating, the number of foreign tourists was also better than expected, reaching 6 million. While these foreign visitors have partially helped to relaunch the art cities, most holiday makers headed to the beach. Choosing to take a dip in the sea, to cool down.

In the field of seaside tourism, the smaller islands have become very popular this year. Thanks largely to the vaccination campaigns that made them the “Covid free” holiday destination. But, also because of their general policies on environmental sustainability.

A muddy holiday at Lake Como

While Nicole Scherzinger’s birthday trip to Lake Como went smoothly, George Clooney’s had a muddy end. A heavy summer downpour caused rivers and Lake Como to overflow. Resulting landslides caused damage to several towns overlooking the Lake. George Clooney was holidaying at his villa at the time and went out to view the damage, which helped boost the moral of the locals, who took selfies with him.

Find out how you can control the risk of sending money abroad in our Property Buyers’ Guide to Currency.

As the tourists returned, so did the rich and famous. Many of whom have enjoyed relaxing holidays in Italy before and some own property here.

Katy Perry and fiancé Orlando Bloom brought their daughter to Venice this summer, enjoying relaxing days on the canals. Sharon Stone was also spotted in this elegant city of canals and palaces.

Florence continues to charm visitors. This summer it welcomed actress Kate Hudson. Also, an Instagram photo posted by TV producer Brad Falchuck, showed him and his wife Gwyneth Paltrow by the Ponte Vecchio bridge in Florence.

Singer-song writer John Legend toured around Italy with his family this summer. Spending time in Florence and Portofino. He will be performing at the Lucca Summer Festival in 2022. Madonna also returned to Puglia with her family and Helen Mirren has been at her holiday home in Salento, Puglia.

In addition, many celebrities chose to enjoy the fresh sea air while sailing on a yacht off the coasts of Amalfi, Capri and other islands. Popping ashore to enjoy the delicious Italian cuisine at a waterside restaurant.

Live and holiday in Italy

When you own a property in Italy, you don’t feel the need to travel abroad so much. There is so much to see within the country. Transport links are good and reasonably priced. I could take a flight to Rome from Brindisi, Puglia in October for 5 euros. An hour and 20 minute train journey from Siena to Florence is under 10 euros. The autumn months are a great time to travel around.