Where do the rich and famous buy in Italy?

Read those Hello! interviews with stars who own in Italy, from Ed Sheeran to Meryl Streep, and it’s clear what they value about their Italian homes – an escape! Freedom from the noise, stress and pressure of LA or London. So where and what have the stars bought in Italy?

Italy has more than its fair share of style and glamour, but it’s not the glitzy cities that are attracting celebrities to buy property here. You are more likely to find your favourite film stars with their feet up on the terrace of their country villa, overlooking a lake or vineyard. Italy is the place to escape the pressures of being a global icon and experience a more authentic and grounded lifestyle.

Puglia has become a popular destination for celebrities to spend relaxing holidays in a rural and coastal setting. The friendly people, great food and beautiful landscape all help to create the perfect place to spend private time with your family.

Looking for your own dream home in Italy? Don’t miss the chance to speak to experts in all aspects of moving – property, finance, law, removals and more – all gathered under one roof at Your Overseas Home in London. Get your free tickets today while they last.

David and Victoria Beckham brought their children on holiday here, as did Madonna. Apulia’s masserias (large country homes) have also become popular as wedding locations for the rich and famous and can be transformed from simple farmhouses into beautiful country houses. For some film stars, their love of Apulia has prompted them to buy homes here, where they can escape the limelight and totally chill.

Dame Helen Mirren is an actress that has played royalty, so you might expect her to buy a castle or at least a fine country house. Near Tiggiano, in the Salento area of Puglia, Helen bought a 16th century masseria with some rather castle like features. This fortified farmhouse has a large tower, high walls, stone vaulted ceilings, arched doorways and limestone floors. 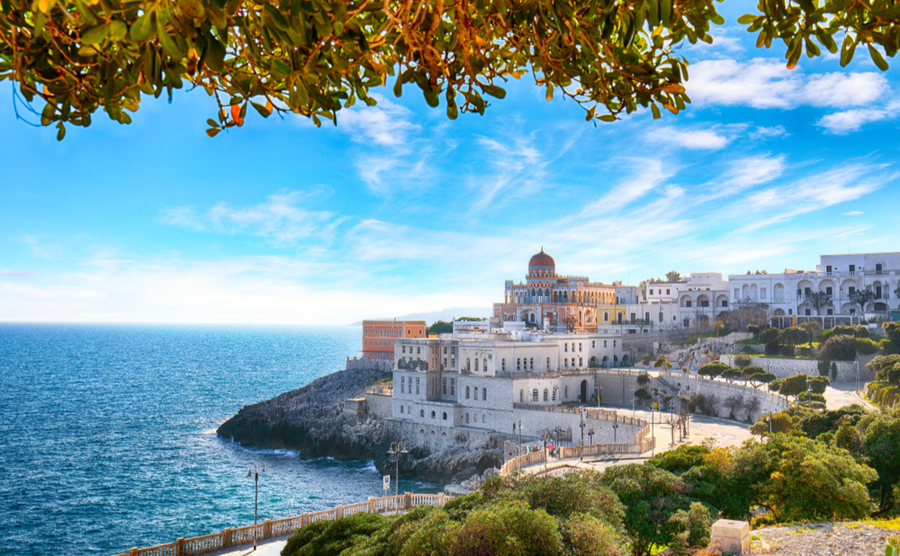 The beauty of Salento

The property required a lot of  renovation work when she bought it, but now has been transformed into a luxurious home. Helen and her husband, the director Taylor Hackford, spend a lot of time there and get involved in initiatives to protect the local environment, and enjoy growing produce on their land, such as melons. Helen was even spotted trying her hand at making the Puglian orecchiette pasta at a local food festival. She is quoted as saying “The Masseria is a calm and beautiful place. I love to stay there. The Triggiano community have been very welcoming and I will spend many more years there, when I am not busy elsewhere for work reasons”.

The Masseria is a calm and beautiful place. I love to stay there. The Triggiano community have been very welcoming and I will spend many more years there, when I am not busy elsewhere for work reasons

Tiggiano is a charming village with a population of less than 3,000. It is about 60km from Lecce and a short drive from the Adriatic coast.

You may have seen Meryl Streep dancing around a Greek house in the film Mamma Mia! but it is in Salento that she found her home. Parts of Salento do have a Greek feel, as many Greeks have moved here over the centuries. 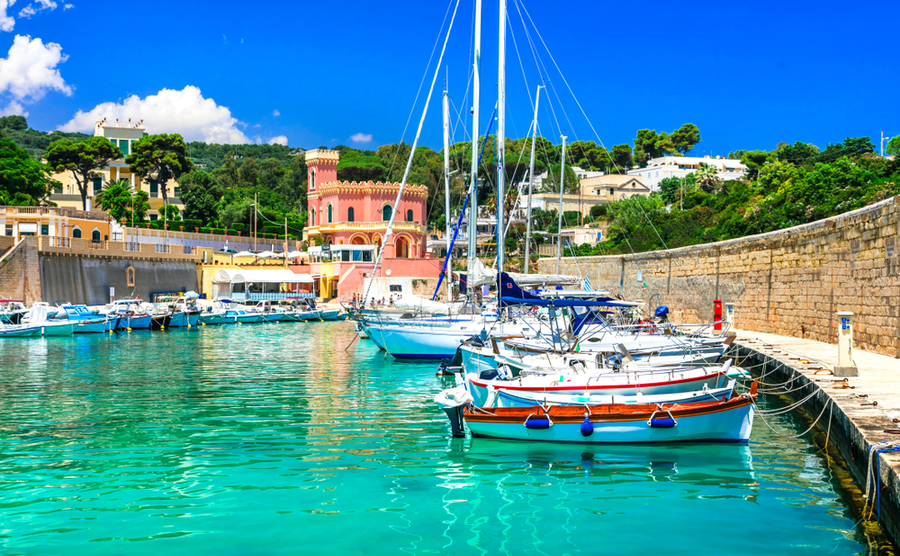 In the old Magna Graecia area of Salento there are still people who speak a distinctive dialect of Greek called Griko. Meryl Streep bought her house near the town of Tricase. Located at the centre of the Regional Natural Park Costa Otranto, Bosco di Tricase and Santa Maria di Leuca, the area features stunning rocky cliffs overlooking the sparkling waters of the Adriatic Sea.

Don’t lose out at the offer stage. Find out how to get the best possible price for your money in our free Negotiation Guide.

Many celebrities have discovered Umbria’s charms. Ralph Fiennes, Hugh Grant, Elton John and Stephen Fry have all spent holidays in the Perugia area. The luxury villas at the Tenuta di Murlo estate are in a gorgeous setting for the rich and famous to relax and be pampered. Surrounded by woods, olive groves, valleys, lakes and rivers, the area is a perfect place to have a countryside retreat. Famous people buy here to escape the crowds and to enjoy the natural surroundings.

Ed Sheeran’s home is near the village of Paciano, close to Lake Trasimeno in the province of Perugia. The area offers privacy and tranquillity in beautiful countryside. As Ed is reported to have an interest in horses maybe he’ll be tempted to explore some of the local trails on horseback. 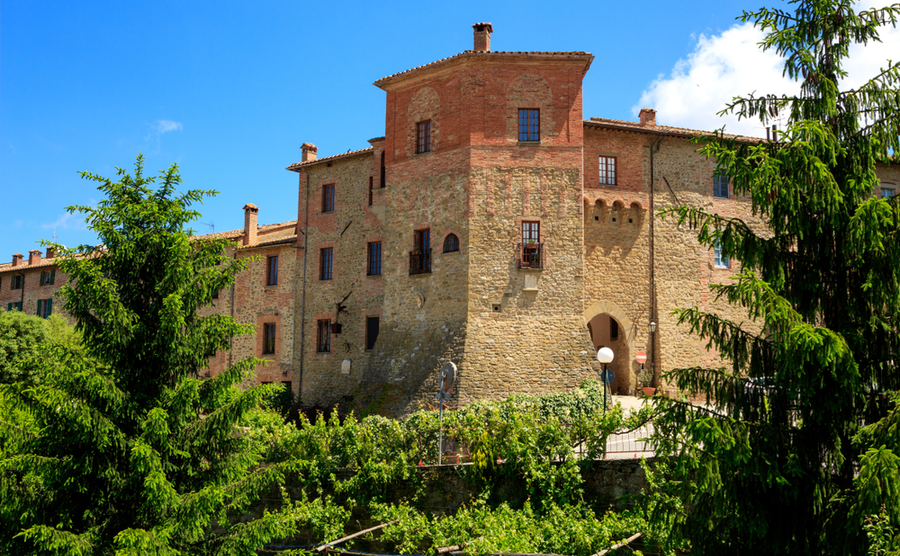 Ed Sheeran has bought a home in the beautiful countryside surrounding Paciano.

All around Trasimeno there are great sign posted routes for hikers (CAI), cyclists and horses. Craftsmanship is still very strong in this area and just a few pieces placed in your property, will immediately give it that homely feel. The most famous is the lace from Maggiore Island, but you will also find crafted objects of pottery, iron & copper.

If you love good traditional food this is the place for you. Ed was spotted in Paciano’s Locanda Manfredi restaurant just before New Year.

Colin Firth may have separated from his Italian wife, but they are certainly staying friendly, continuing to appear together in public. Colin now has Italian citizenship, as do his two children, but who has the family residence just outside the Città della Pieve? 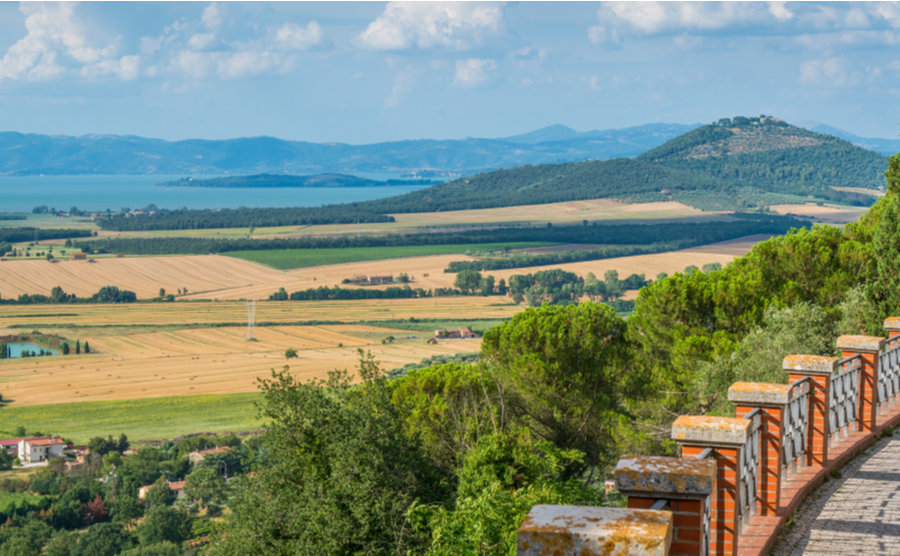 Rooms with a view, of Trasimeno

Città della Pieve is a medieval town of around 8,000 people in the province of Perugia, close to Trasimeno Lake. It is mostly built from red brick – like many homes in the towns and countryside here –7, set on a hill that dominates the Val di Chiana.

Colin’s home is set in an olive grove that produces enough olive oil to give to relatives and friends. So, look out for him down the local olive press.

Get a free, no-obligation quote from Smart Currency Exchange today to find out how much your sterling budget could get you in euros.

George Lucas is by the Lake

The famous Star Wars Director, George Lucas chose to buy a 16th century convent on a hill overlooking Lake Trasimeno. Millions of euros were spent restoring “Il Convento dei Capuccini” and incorporating state-of-the-art luxury. This home is designed to be enjoyed with friends. The property now accommodates 22 guests who can explore the 60-acre estate, which includes a walled garden, swimming pool, tennis court, croquet, a seven hole “shoe-golf course”, olive groves, vineyards and a forest for mushroom and truffle hunting. 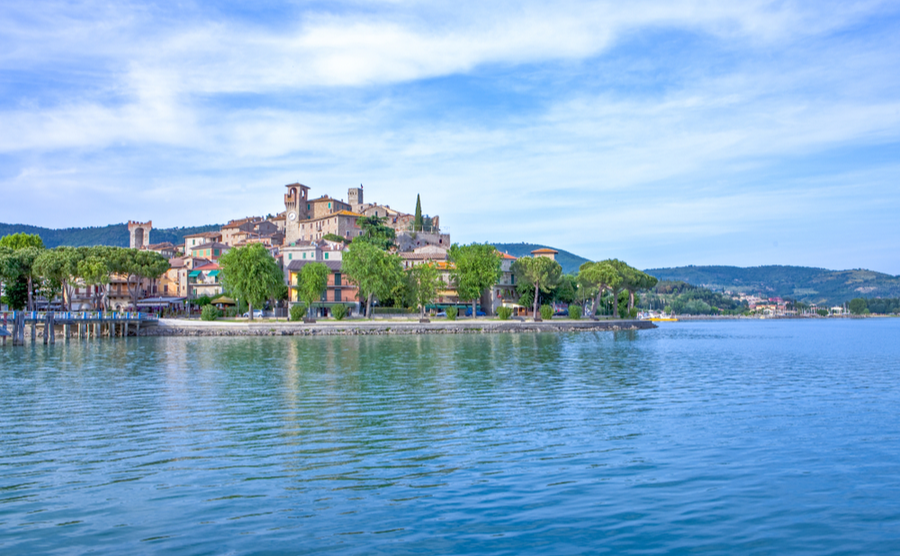 Lake Trasimano was George Lucas’ choice for an Italian home.

The closest airport for commercial flights and private jets is a 30-minute drive away at Perugia airport, although on this estate you can land a helicopter in the garden.

Lake Como has a special appeal for the rich and famous looking for peace, exclusivity and a touch of Italian style. A home here not only offers happy holidays but can also be a very good investment. Some of the grand villas along the waters edge are so exclusive and the estate agents so discreet, that no one is certain who the owners actually are. You can assume it is someone very wealthy, however!

So, the local gossip begins. The biggest question is, does Richard Branson own Villa La Cassinella? It’s a luxurious villa located on the same peninsula as Villa Balbianello, which hosted Daniel Craig as James Bond, when they filmed a scene in the gardens for Casino Royale.

This is the man who has introduced many a film star to the joys of life by the lake. George Clooney bought the 18th century Villa Oleandra in 2002. Bought for around €11 million, it is now estimated to be worth €90 million. Not a bad investment. 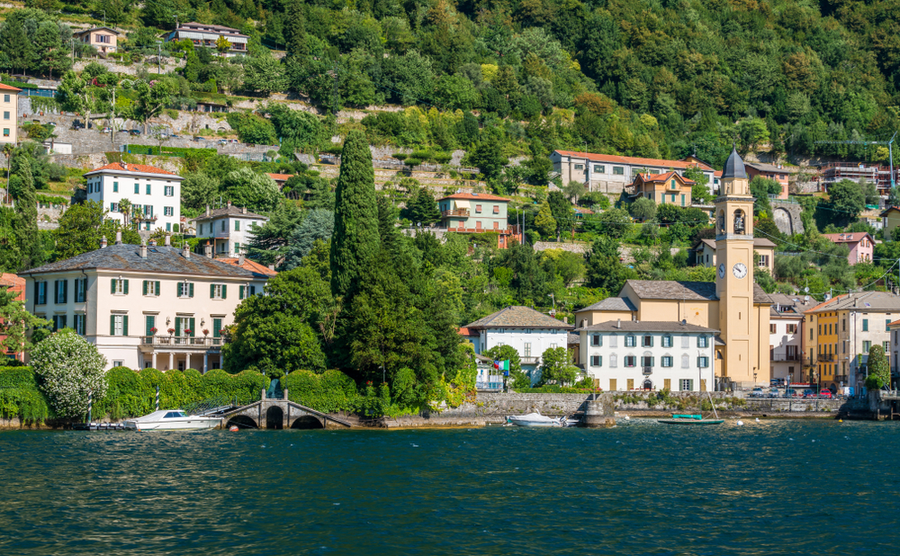 George Clooney bought the 18th century Villa Oleandra in 2002. Bought for around €11 million, it is now estimated to be worth €90 million. Not a bad investment.

According to “Explore Lake Como”, he now owns four villas around the lake, including the nearby Villa Margherita. Located on the western shore of Lake Como in Laglio and surrounded by a large botanical garden, Villa Oleandra has provided George and Amal Clooney with many lovely summer holidays, as well as a place to host their A-list friends, such as Jennifer Aniston, Matt Damon, Prince Harry and Meghan. George Clooney was once quoted as saying that the villa “changed my life in a very pleasant and unexpected way… I realized how beautiful life was in Italy and how it really helped calm me and not feel so pressured.”

The province of Matera in the Basilicata region is relatively unknown, but is becoming famous for its ancient cave dwellings, dramatic landscapes, and historic houses. Once the new James Bond film has been released in 2020 even more people may be intrigued enough to venture beyond Apulia and discover the beauty of the Basilicata region.

Famous for films such as The Godfather and Bram Stoker’s Dracula, Francis Ford Coppola’s paternal grandparents actually came to the United States in 1904 from Bernalda, a town and commune in the province of Matera. 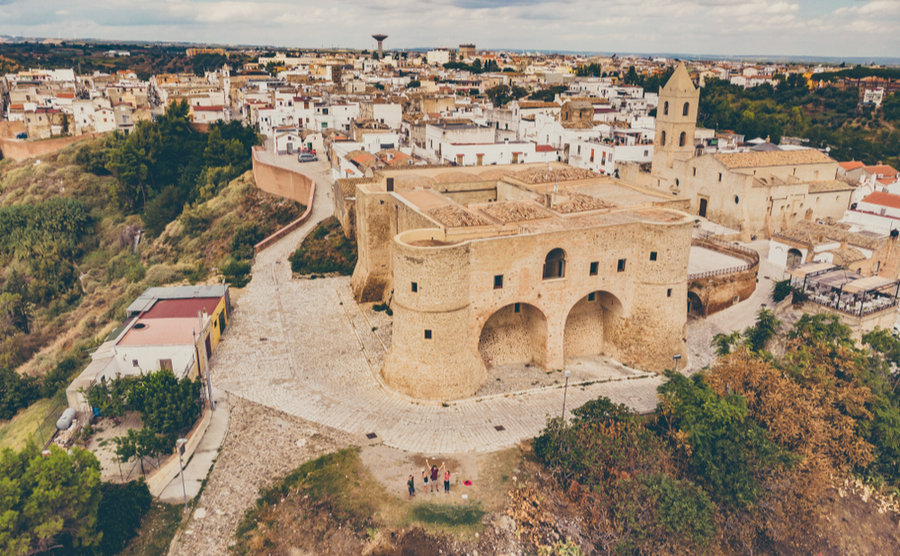 Francis Ford Coppola has bought a palazzo near his ancestral hometown of Bernalda.

In 2004 Francis decided to buy a palazzo house there for his family. They love the place so much that his daughter Sofia’s wedding was held there. The Coppola family have now converted Palazzo Margherita into a small luxury hotel with beautiful frescoed ceilings, so you can also enjoy the house. Located 45 km from Matera and a 15-minute drive from the beaches of the Ionian coast it’s a splendid place to escape from city life.

These are just some of the areas that have tempted the rich and famous to buy a property in Italy. Other popular areas include prestigious seaside resorts such as Capri, Portofino and Santa Margherita. The success of Prosecco in the United States and the UK, has also created a growing interest in properties with vineyards, with celebrities such as Sting already producing their own label wines. What is wonderful about Italy is, whatever your budget, it’s possible to find a place where you can relax and enjoy tranquillity … away from people.