If there’s one thing that politicians seem to love, it’s a holiday in an Italian villa. Even better if it’s the free gift of a supporter. So following in the footsteps of Tony Blair, who enjoyed himself in Tuscany courtesy of Silvio Berlusconi, Boris Johnson is rather fond of Evgeny Lebedev’s palatial, luxury homes in Italy. Now, one of Lebedev’s Italian properties is up for sale, so we look at what an oligarch’s earnings will buy you in Umbria.

Evgeny Lebedev’s castle in Italy is an amazing restoration worthy of attention. Now titled Baron Lebedev, he is a Russian-British businessman, who owns the Evening Standard, The Independent, and the TV channel London Live. His wealth comes from his father, Alexander Lebedev, a former KGB officer. Evgney Lebedev is also a millionaire who owns several properties, including a castle in Umbria, Italy. 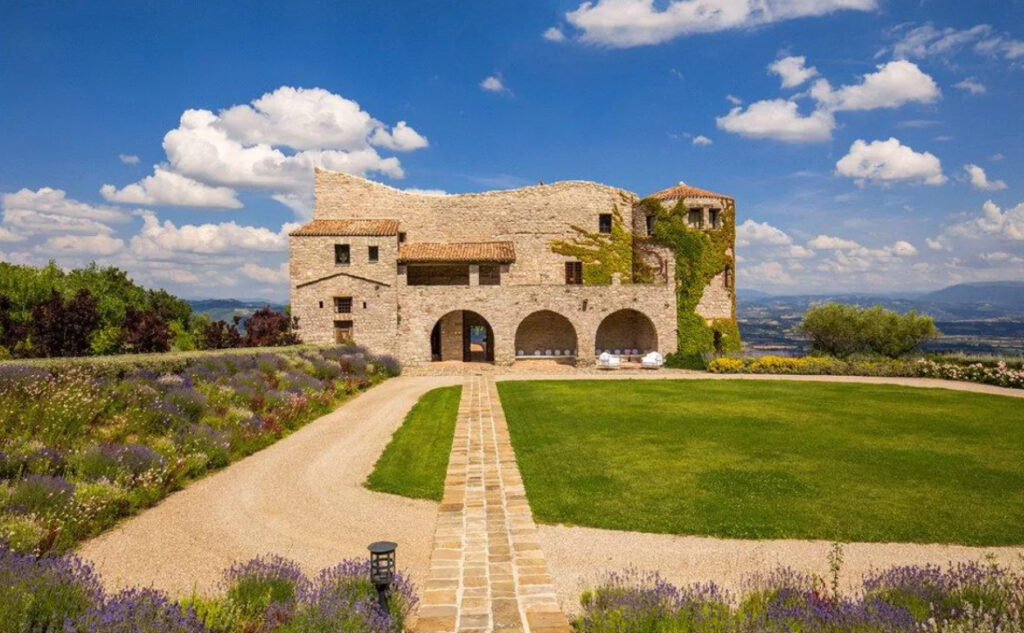 In the wake of the Russian invasion of Ukraine, there has been some controversy about his enoblement. British prime minister Boris Johnson nominated his friend for a life peerage back in July 2020, bestowing this great honour for his philanthropy and services to the media. The nominee list mentions his patronage of “Space for Giants”  which aims to protect Africa’s remaining natural ecosystems and the large wild animals they contain.

According to The Times: “The Prime Minister pushed ahead with the nomination of his friend Evgeny Lebedev, even after intelligence officials raised concerns”. After the Labour party once again raised questions about what those security service concerns were, a motion was passed on the 29 March 2022, forcing the government to release the documents by the 28 April 2022.

Boris Johnson’s name has been associated with parties a lot in recent years, at home and away. In Italy, Evgeny Lebedev is known for holding extravagant parties at Palazzo Terranova, near the Città di Castello in Umbria. The local press keep an eye on who arrives at Perugia airport, spotting politicians, musicians and celebrities, such as Tony Blair, Pixie Lott and Joan Collins.

Boris Johnson has been to Lebedev’s parties in London and Italy several times, but the last reported trip to Umbria was in April 2018, while he was Foreign Secretary. At the time it raised eyebrows due to a photo of Boris waiting for his budget airline flight home, looking rather crumpled and worse for wear, and reportedly telling a fellow passenger he had had a “heavy night”.

Questions were asked about why Johnson didn’t have police protection officers with him, and whether he spoke to Evgeny’s father at the party. This was, after all, just a month on from the Salisbury poisoning and shortly after Mr Johnson attended a Nato meeting on Russia.

When one party venue isn’t enough

Since restoration work was completed on Lebedev’s Umbrian castle in 2016, he has had a second potential venue to welcome guests. This is Castello di Procopio, which is conveniently located on the slopes of Monte Tezio, less than 30-minutes’ drive from Umbria’s International airport.

There were rumours that Boris Johnson’s child had been baptised there, and though probably untrue, the private chapel at Castello di Procopio would have made a charming venue.

As seen in many publications speaking about architecture and interior design, Castello di Procopio, previously known as Castello di Santa Eurasia, is a beautiful medieval castle. It boasts a prime location with breath-taking views of the Umbrian countryside and offers total privacy.

However, the building didn’t always look so spectacular. When first seen by Evgeny Lebedev in 2005 it was a complete ruin, with no roof, collapsing walls and weeds growing all over it. Research into its history revealed that the castle dated back to the 12th century and was commissioned by the Holy Roman Emperor, Frederico Barbarossa. Built as a fortress, it was at the centre of wars between the Empire and the Papacy.

Lebedev hired Rome based architect Domenico Minchilli  and famed interior designer Martyn Lawrence Bullard, to transform it into a grand residence fit for a Baron. Some before and after photos can be seen on Architectural Digest, including one of Lebedev stood at the iron portcullis entrance with Boris; his faithful wolf dog.

The castle now has a very regal looking great hall complete with a fireplace mantel from an Italian monastery. There are several stone fireplaces, some of which are Italian originals from the 16th and 17th century. There are also stone floors, wooden beams, arches and chandeliers. 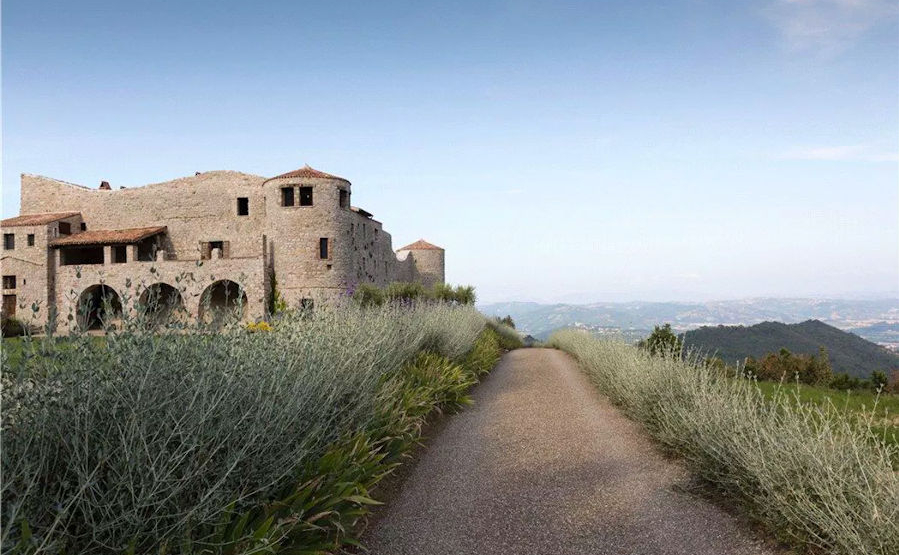 The ironwork was carefully reproduced according to 17th century Umbrian designs and hand forged by a local blacksmith to retain an authentic sense of age. There are eight bedrooms and bathrooms, plus a large living room, restaurant grade kitchen, gym, Turkish bath, spa and outdoor swimming pool. All this could be yours, as Castello di Procopio is now for sale.

Part of what gives a building a castle feel is the interior design. Martin Lawrence Bullard designed the rooms at Castello di Procopio using luxurious upholstery and fabrics. The use of antiques, rugs and paintings also help give that authentic castle feel.

One of the four poster beds even has a large crown above it, giving the occupant a feeling of being king of the castle. Although the furniture looks like it has always been there, it was actually bought from Parma antiques fairs, antique shops in Florence and reputable dealers in Rome. Bullard also used respected dealers like Victoria Harvey and Guinevere in London, as well as auction houses in Paris, New York and Los Angeles.

If you have always dreamt of owning a castle, then this castle in Trentino Alto Adige, Italy could be just what you are looking for. In a stately position on top of a rock, the castle has splendid views of a lake, woodland, mountains and the nearby village. 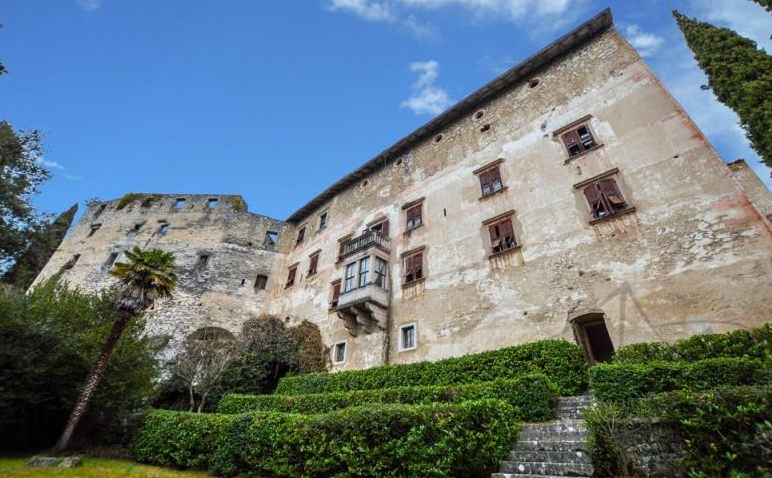 Your very own Italian castle? (Click the image to see the details)

The castle is perfect for welcoming guests and holding parties, with a large dining room and 12 bedrooms all with en-suite bathrooms. There are two parts to the castle, one section has been totally restored and the other has the romantic look only a ruined 12th century castle can offer. All lit up in the evening, it looks truly magical.

Rich and famous in Italy

Stylish cities, beautiful scenery and superb cuisine have attracted wealthy tourists to Italy for centuries. Some of whom have fallen in love with the place and decided to buy a property here. Just this week actress Angelina Jolie was spotted in Salento, for a couple of days.

Just this week actress Angelina Jolie was spotted in Salento. The rumour quickly spread among the locals that the short trip may have been to view a property.

The rumour quickly spread among the locals that the short trip may have been to view a property. Although, what we do know is that she also visited the Bambino Gesu Hospital in Rome to meet the Ukrainian children who arrived in Italy from the conflict.

Where the wealthy buy

While Tuscany is still very popular, the rich and famous have begun buying property all across Italy. The Perugia province of Umbria appears to be one of the up-and-coming places to buy a countryside villa, along with fortified masserie in Salento, Puglia. If you have over a million to spend, there are a large selection of stunning properties for sale across Italy.