When I first came to live in Cyprus, I was unmarried, and in a relationship with my Greek Cypriot now-husband. After we had married and had our first child in Cyprus, I remember my father-in-law reminding me of these wise words of Socrates when we were thinking about where we should send my daughter to school in Cyprus. “Education is the kindling of a flame, not the filling of a vessel.”

When it came to primary education, the choice for us was clear-cut. We both wanted our daughter to enter a Greek-speaking state school in Cyprus. Why? Because we believed that it is important for our daughter to be fully immersed in the Greek/Cypriot culture at an early age. This for us was rooted in learning the Greek/Cypriot language, whilst being amongst other Cypriot children. Our daughter had been born here in Limassol, Cyprus. As such, it seemed to be the most natural thing in the world to do.

And don’t forget – I’d heard the words of Socrates from my father-in-law. I fully agreed with them. For me, sending my daughter to state school in Cyprus would indeed represent education as “the kindling of a flame”. Socrates’ “flame” is the slow burning candle that is knowledge, even in primary school, but not the dry knowledge of academic subjects. At that time, it was knowledge of the culture of Cyprus, and the early beginnings of my daughter’s learning her native language. As it turned out, this fanned her future thirst for knowledge about the world around her. 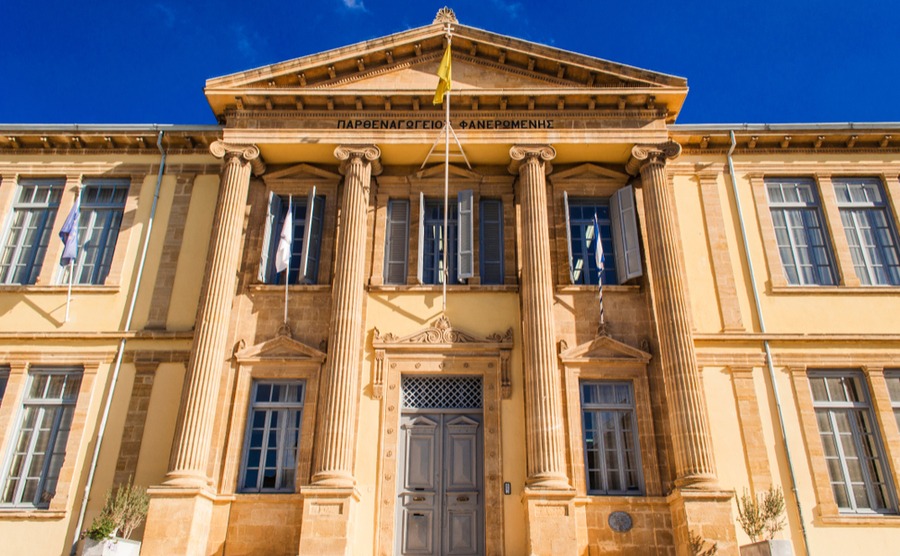 Faneromeni School is the most famous school in Cyprus, founded in the 19th century.

I would also point out that sending your child(ren) to a Cypriot state primary school is free. Plus, it’s a good way for them to learn another language from an early age, as the teachers will help them to obtain the language.

This doesn’t suit all expats’ situation – if you’re coming for just a few years, you might wish to keep your children in the British curriculum. That’s why I am going to tell you about the primary schools that are not state-run, and are known as “private”. They are usually attached to the secondary schools, or ‘gymnasiums’ as they are known locally. Some, such as The Heritage School in Limassol, include an Early Years School Nursery, Pre-Reception, Reception, and Year 1 classes. These act as a lead-in into their primary school, which runs from age 5/6 to 11/12.

I have to say that private early years and primary schools were appealing to my British friends. These schools pride themselves on the fact that they follow the UK curriculum very closely. As such, you can expect your child to be educated like they would in the UK. These schools are fee-paying schools, but, in my opinion, the quality of education is excellent.

Don’t miss your free Cyprus Buying Guide is a comprehensive overview of everything to consider when buying a property here.

The teaching staff are well qualified, and most have obtained their teaching degrees from UK. universities. And if you want your child to go to a brand new private primary school in Cyprus, The Pascal English/Greek School opened its primary school in Limassol in 2017.

In both state and private early years/primary schools in Cyprus, the children wear uniforms. You will find that the teachers understand the necessity for discipline, whilst they also care for the children under their care. Even at this age, the children go on school trips, usually twice per term. Age-appropriate sports activities are available.

Half terms in the private primary schools are in line with the half terms in the British schools. In other words, you can take a short holiday back to the UK with your child if you if you like! The same applies to standard Christmas and Easter vacation times. The summer vacation in Cyprus is long. In all the primary schools it begins from the end of June and extends until the first week of September. Again, this gives you ample time to take a summer vacation back in the UK or elsewhere if you want to!

When my daughter was approaching age 12, we needed to think about which secondary school she should attend. Although my daughter had become bi-lingual over the years, in that she spoke English and Greek, Greek was her first language. The natural choice for us was for her to go to a state secondary school in Cyprus. This way, she’d obtain her Cyprus Leaving Certificate, or Apolitirion, as it is known.

If your child has been in state primary school, you can place that child in the secondary state school. They spend the first three years of their secondary education – junior high school – studying general academic subjects. Then, for the final three years of their secondary education – high school – they choose categories of subjects. For example, they could choose the arts (subjects like art and history) or the sciences (subjects like maths, physics, chemistry, biology). The subjects they choose in the final three years (called ‘ligion’ locally) are the selected subjects that they will take examinations in, along with English and general maths, to obtain their Apolitirion. Everyone will also have general PE lessons.

If you wish, your child can go to private institutions in the afternoons to study A levels/BTEC/Foundation qualifications additional to the Apolitirion in school, but these are fee-paying. Like the state primary schools, there are no fees to pay in the state secondary schools and uniforms are worn, but at a subsidised cost.

If you prefer, your child can go to a private secondary school in Cyprus. These are fee-paying. Again, like the state primary schools, the teachers are well qualified, maintain high standards of discipline, and are well respected by the children and parents. Children wear smart uniform.

If your child has been attending the private primary school prior to moving up to the secondary section of that school, there is no entrance exam requirement!

To enter these schools, your child would need to sit an entrance examination that tests English language and maths. They take these in the last year of primary school, with preparation from their teachers. Remember, though, that if your child has been attending the private primary school prior to moving up to the secondary section of that school, there is no entrance exam requirement!

Personally, I liked the way in my daughter’s private secondary school there were two strands provided for secondary education. The first is the sports strand, where children follow coaching in various sports before attending their main lesson classes (included in the fees). The second is the non-sports strand, where children follow the traditional academic route. They follow the UK curriculum closely, and there are options for children to take the U.S. TOEFL and other U.S. qualifications.

If you’re coming out soon to view properties, you don’t want to miss any crucial details. Find out what to look out for with tips from estate agents in your free Viewing Trip Guide.

I found that the teachers encouraged team building in my daughter’s school, and arranged socialisation evenings that the teachers and pupils attended. School trips usually take place twice per term, with additional half term holidays in the private schools. Occasional trips abroad are also offered, usually during the Easter vacation. And one more thing to end on: if any of you are Cypriot or Greek, your child can also study for the Apolitirion in these schools, either on its own or with A levels like my daughter did – the choice is yours!

The Apolitirion involves studying for a number of subjects and allows the child to enter Cyprus universities or universities in Greece.

There was a rumour at the time when we were deciding on a secondary school that universities in the UK were not accepting the Apolitirion from Cypriot students, although they were accepting it from students in Greece, which follows the same system. So as a precaution, we decided to send our daughter to a private secondary school. These offer IGCE and GCE A-levels, parallel to studying for the Apolitirion Certificate. It meant that our daughter could obtain two routes to attending UK university.

When we came to making our daughter’s UCAS UK university application this year, we discovered that the UK universities do indeed accept her Apolitirion

As it happened, when we came to making her UCAS UK university application this year, we discovered that the UK universities do indeed accept her Apolitirion. However, some universities insist it must be together with A-levels. There is an upside to this. Like my daughter, your child will normally have lower grade requirements for their A-levels than in the UK, as they’re studying another qualification too. For example, the University of Manchester requires an Apolitirion score of 18/20 plus two A-levels. The below, from Manchester, is a good example of common equivalence between A-level-only offers and offers including A-level and Apolitirion:

Other universities will accept the Apolitirion on its own. For example, the University of Plymouth requires a score of at least 17/20. Here is an example equivalency table from Plymouth:

So, what I would say to you is that achieving the Apolitirion Certificate will help your child to enter UK universities. However, do double-check with the individual universities whether they will include Apolitirion or not.

If you’re thinking of starting a new life in Cyprus, make sure to download your Cyprus Buying Guide below. It’s completely free, and contains comprehensive information about making your move a success. Plus, if you’re going to purchase soon, don’t miss our list of the top ten things to keep in mind this autumn.