Celebrities who live in and love Australia

From Hollywood power couples to TV chefs, celebrities love Australia. Find out who might you spot when you make the move.

They may film I’m a Celebrity, Get Me Out Here! in Australia, but most celebs seem to love the place! It’s not hard to fall in love with Australia, so it’s no surprise that many celebrities end up visiting and can’t stay away. The A to D-listers below have all gushed about how much they love Australia, with many of them buying property there and visiting the country on a regular basis.

The late George Michael visited Australia for an extended holiday in 2010 and ended up splashing out £4.5 million on a luxury home in the Sydney Harbour.

American pop singer Pink has been to Australia a lot and Aussies seem to love her just as much as she loves them. Pink has held some record breaking shows in recent years. In 2013, she performed 46 shows to audiences totalling over 600,000 people (bigger than the population of Tasmania), and in the same year she sold out 18 concerts at Rod Laver Arena in Melbourne. She has stated numerous times that Australia is her favourite place in the world and be it her sensational voice, no-frills persona or her profanity, Australians are truly enamoured with her too.

Get as much house as you can for your dollar with the insider tips and tricks in our free guide on How to Negotiate.

Talk show star Ellen DeGeneres and her Australian wife Portia de Rossie were rumoured to be house hunting earlier this year on the Mornington Peninsula, just outside Melbourne. Portia is originally from Victoria, and the power couple spend a lot of time Down Under visiting family. Ellen was reported telling a crowd of fans she plans on moving to Australia after retirement, “I shouldn’t put it out there but I can see us living here one day,” she said. 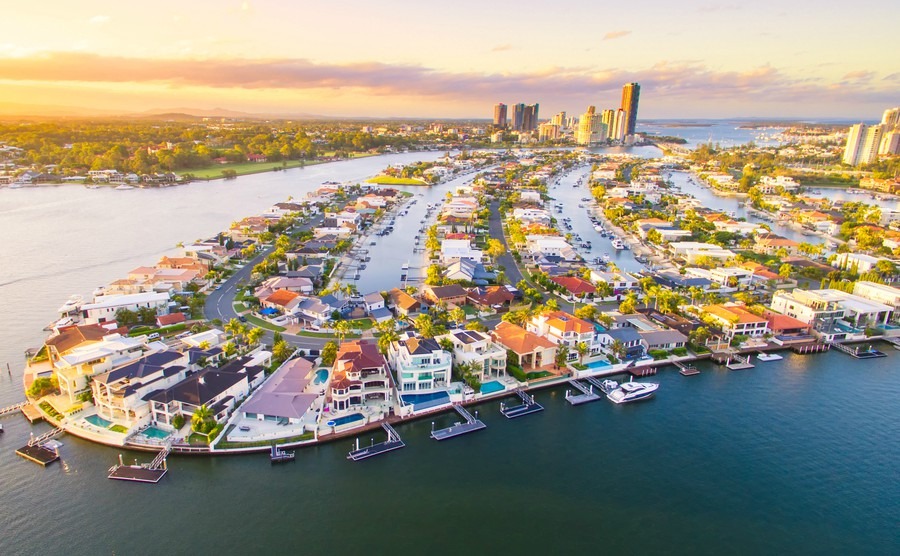 Where the other half lives: luxury lifestyles of the Gold Coast

The late George Michael visited Australia for an extended holiday in 2010 and ended up splashing out £4.5 million on a luxury home in the Sydney Harbour. Although he continued living in London, he regularly visited his Australian home before dying in 2016.

British singer Rita Ora is looking for any reason to move to Australia. Apparently she fell in love with the laid-back nature of Australia and told The Sun that she is constantly telling her label to find a reason for her to go to Australia. Although she hasn’t purchased property here yet, it is certainly in her sights.

For more information about buying in Australia, email the resource team on australia@propertyguides.com or call them on 020 7898 0549.

British Chef Gordan Ramsey plans to retire in Australia, according The Sun, in search of sunshine and relaxation in his retirement, away from the stress of the kitchen and cameras.

Westlife star Brian McFadden was exposed to Australia while dating Aussie singer Delta Goodrum. They split in 2011 after living in Sydney for six years. Despite his break-up with the Australian songstress he still lives in Sydney, now with his Irish DJ girlfriend.

Australian celebrity couple Keith Urban and Nicole Kidman have a home in Australia, despite living in the US for most of the year. Their property is an idyllic farmhouse in remote New South Wales. Nicole purchased the 45-hectare home back in 2008 for just over $5.1 million AUD (£3.1million).

Now it’s your turn. Is Australia calling you? If you’ve been feeling the urge to relocate to Australia, why not make it happen this year? Download your free buying guide below to find out about purchasing a home in Australia. And, if you’re moving from overseas, don’t miss our advice on how to get an Australia visa.