Where are the best places to buy if you’re moving to Melbourne?

Melbourne is the ‘cultural capital’ of Australia, a UNESCO city of literature and centre of the Australia arts. Not only that, but moving to Melbourne also means enjoying over 2,360 hours of sunshine a year and summer temperatures in the 30s. A hard task, but someone has to do it!

What are the advantages of moving to Melbourne?

Like most major Australia cities, Melbourne’s right on the coast, with excellent beaches nearby. It’s also a cultural haven – arts, fashion, sport, cinema and music are all big parts of the city’s life. It’s home to many TV studios and has some of the oldest cultural institutions in Australian life. Moving to Melbourne, you can enjoy the National Gallery of Victoria, the Royal Exhibition Building or catch a game at the Cricket Ground. 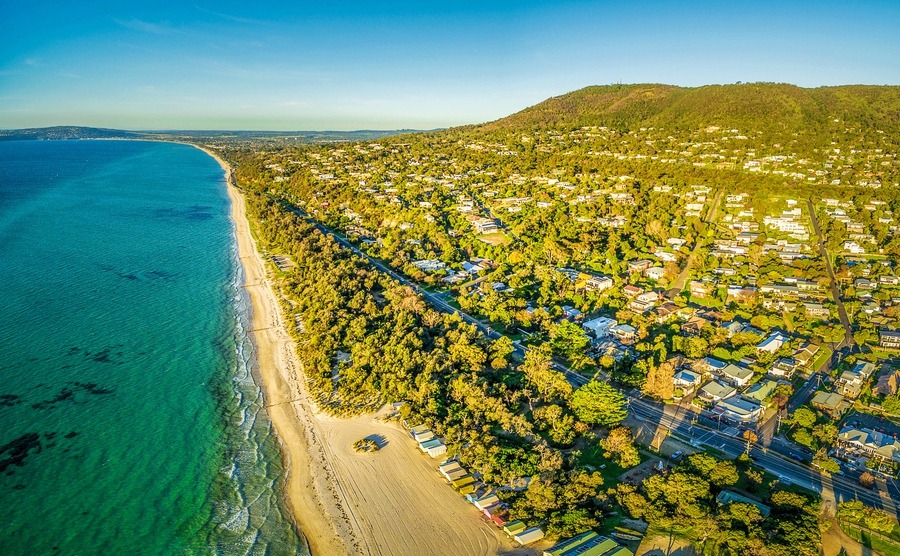 The Monington Peninsula’s a popular location for expats moving to Melbourne.

If you’re moving to Melbourne with children, you’ll be pleased to know it’s an educational powerhouse. Six out of the top 20 high schools nationwide are in the city, while there are also 21 international or IB schools.

Generally speaking, you’ll find that the further west you go, the cheaper property prices are.

Come the weekend, you can relax at the Royal Botanic Gardens, get up close to wildlife at Melbourne Zoo or spend a lazy day at Brighton Beach.

Melbourne’s a fantastic retirement destination, but if you’re coming for work, there are still lots of opportunities. The most popular sectors British expats in Melbourne work in are professional/technical/administrative roles (14%), healthcare and social assistance (14%), retail (13%), manufacturing (11%) and education (9%). Over 16% work as managers in their role.

Salaries are comfortable. Computer professionals make AUD1,900 a week on average. A plumber makes AUD1,000, while a school teacher makes AUD1,500. A nurse makes AUD1,340 and a civil engineer AUD1,683.

Melbourne centre and suburbs alike are full of commercial precincts. Some of the biggest malls and shopping streets include Chadstone (‘Chaddy!’), Melbourne Emporium, Bourke Street and 2km-long Chapel Street. If you’re moving to Melbourne, you’ll also be able to take advantage of the many markets.

Where are the best districts of Melbourne?

Melbourne is a huge city – most Australians prefer home to apartment living, so the cities tend to cover a lot of area. Luckily, that means there are enough different districts to suit everyone’s tastes and budget. Generally speaking, you’ll find that the further west you go, the cheaper prices are. Likewise, the further east you go, the more expensive prices are. Here are some of the best:

A popular area with British expats, Bayside has a stunning waterfront location. It boasts a number of popular beaches, including Brighton and St Kilda. The Ormond Esplanade is a favourite among locals for its cafés, as is Church Street for its boutiques. Albert Park is a quiet, wealthy are that’s popular with families. It’s got a very central location, as little as twenty minutes by car and train from the city centre.

Make sure exchange rate movements don’t add thousands to the cost of your house. Our partner,Smart Currency Exchange, the UK’s only property-specialist currency business, has had over 1,000 5* reviews from our readers for their help protecting budgets from market movements.

This is a leafy suburb popular with overseas buyers. Expats from China, India, Malaysia and the UK make up the biggest international population.  Box Hill has an absolute plethora of Asian restaurant – and its fresh market is a must for foodies. The Blackburn Creeklands are great for a Sunday stroll. You might also recognise the town hall – it was Erinsborough Courthouse on Neighbours!

The shire of Mornington Peninsula may seem like a far-out suburb, but it’s a destination in its own right. There are world-class beaches, including Sorrento and Fingal. Port Philip and Western Port are both popular water-sports destinations. Its wineries are well known throughout Australia. The western side of the peninsula feels much more separate from Melbourne, with plenty of small towns along the shoreline. Nonetheless, you’re still only around an hour by train from the city centre.

Heading further inland, you’ll find the Yarra Ranges. This beautiful area is particular popular with European expats, with a large British community. Although it’s only 90 minutes by car from the city centre, or between an hour to an hour and a half by train, much of it is rural. If you’re moving to Melbourne but want peace and quiet, here’s a place for you! Closer to Melbourne itself, the suburbs are quite densely populated. However, moving towards the Great Dividing Ranges, you’ll find more isolated settlements and lots of forest cover.

The Yarra Valley’s known again for its wineries and restaurants, especially around Yarra Glen. If you’re commuting, Belgrave’s a good choice. It sits at the end of Burwood Highway, but also has plenty of life of its own. Main Street has a supermarket, shops, services and banks.

To the west of the CBD is Wyndham, around 25-40 minutes’ drive. Its 27km of gorgeous coastline is attracting more and more buyers. It’s one of the fastest-growing suburbs in Melbourne and there are trains every forty minute to the centre.

The Open Range Zoo is a big hit with kids, who can meet rhinoceros, lions and giraffes. Its centre has all the shops, libraries, banks and services you need without going into Melbourne. If you’re thinking of buying here, you need to act soon – prices are climbing fast.

Banyule’s a small, green suburb located close to the city centre. Anyone moving to Melbourne’s centre should check it out – its cycling paths and walking tracks make it a pleasant place to live. Ivanhoe has a historic centre with an Art Deco town hall and a good golf course. Picturesque Eaglemont has a number of Victorian properties and a ‘Garden City’-esque layout. Properties coming on the market are few and far between, so keep your eyes peeled!

Thinking of moving to Melbourne?

If you’re thinking of moving to Melbourne, it’s important to get your search underway. As you can see, it’s not a cheap city – so you need to be in a position to snap up a bargain as soon as you see one. Download your comprehensive guide to buying in Australia below to find out what you need to do.