Your guide to living in Sydney

Is there a more exciting city in the world in the 21st century than Sydney? We don’t think so – but where should you live?

Australia has more UK expats than any other nationality and many of us have found our way to Sydney to work and raise a family. It is Australia’s oldest European settlement and the most populous city in the country; yet it is surrounded by stunning natural beauty and has the most glorious sea views and waterfront of any major city. With just over five million people, Sydney today is a dynamic and world-class city, and boasts a high standard of living. There are plenty of work opportunities, a diverse array of neighbourhoods to choose from, and loads o

Australia has more UK expats than any other nationality and many of us have found our way to Sydney to work and raise a family. f activities available with pleasant temperatures all year.

Life in Sydney is at least as exciting as anywhere you will ever find, and you get the distinct feeling that this is a city on the rise, where anything can happen as the brightest and best arrive from all over the world. Will you join us here?

Living in Sydney attracts a prestigious price tag, however there are ways to do it on a budget too. Overall property prices in Sydney are on the increase, with the median home price around $1.15 million. To rent a two-bedroom apartment in the city costs about $3,800, while a similar style apartment outside of the city centre is about $2,500. Wages in Sydney are high with the average household income (2016) $160,000 per year. Sydney is rated the 25th most expensive city in the world for expats with housing, food and electricity being the biggest drains of finances. 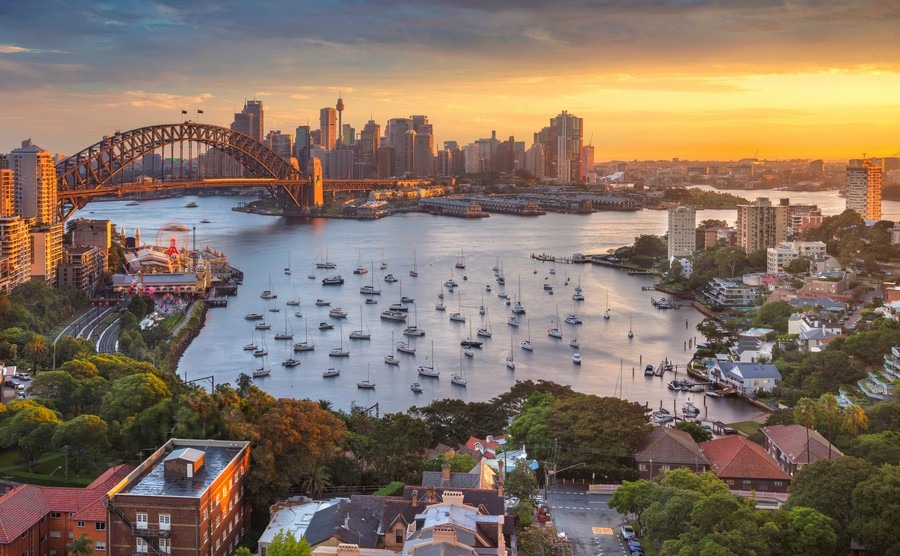 Sydney at sunset, in a city that never sleeps

Sydney is the economic capital of Australia and is home to the country’s largest businesses and multinational companies. There are many jobs in the financial, insurance, healthcare, retail and manufacturing industries with the majority of expats working in the central business district (CBD). Workplace culture in Australia is centred around many family-friendly practices such as generous leave packages, sick and carers leave as well as flexible and work-from-home days in some cases. Those commuting to work can choose to do it via train, bus or ferry. Although traffic in Sydney is horrendous, there are plenty of affordable public transport options instead.

Where to live in Sydney

Where you choose to live in Sydney will depend on your budget, how close you want to be to the city centre and what activities and scenery you want to surround yourself with. Generally speaking, the city and the beaches are the most expensive, the northern suburbs are also more prestigious, the south suburbs are quite trendy while to the west there are cheaper areas. Here are some of the popular suburbs where many British expats choose to live.

The Eastern suburbs include the beaches of Bondi, Clovelly, Tamarama, Coogee and Bronte. The majority of expats settle in the Eastern suburbs, for at least a period of time, due to its fun holiday vibe and close proximity to the city. Health and wellness are prevalent in this part of Sydney with surfing, yoga, exercise and healthy eating a focal point in many people’s lives.

The majority of expats settle in the Eastern suburbs, for at least a period of time, due to its fun holiday vibe and close proximity to the city.

The Northern Beaches include Manly, Balmoral and the Lower North Shore. Those working in the city can enjoy a pleasant ferry ride from Manly Beach to the CBD each day, taking in views of the Opera House and Sydney Harbour Bridge along the way. Manly is more upscale than Bondi and is much more laid back. Balmoral Beach has a low-key local feel, but is a bit harder to reach downtown with a 30-40 minute bus ride. The Lower North Shore includes Lavender Bay, Kirribili and Crow’s Nest. These spots present good property opportunities, and are in a great central location.

The city and its surrounding suburbs of Surry Hills, Paddington and Balmain are great for people who want to live right near the CBD. Surry Hills is a lovely area with lots of cafes and a great nightlife scene. Paddington is full of designer shops and has a great food scene. Balmain has an English charm and is full of young families.

Although there are many more suburbs in Sydney, these are the most popular ones for expats. If you’ve been thinking about moving to Sydney as a British expat or retiree, let us help you.