Australia has more UK expats than any other nationality and many of these expats find their way to Sydney to work, raise children and retire. Sydney is a dynamic and world-class city, it is surrounded by stunning natural beauty and boasts a high standard of living. With plenty of work opportunities, a diverse array of neighbourhoods to choose from, and loads of activities available, life in Sydney is anything but dull.

Sydney is Australia’s oldest European settlement and the most populous city in the country with just over 5 million people. It has a corporate feel and year-round pleasant temperatures and provides expats from the UK with a lifestyle only dreamed about back at home.

Overall property prices in Sydney are on the increase, with the median home price around $1.15 million.

Cost of living in Sydney

Living in Sydney attracts a prestigious price tag, however there are ways to do it on a budget too. Overall property prices in Sydney are on the increase, with the median home price around $1.15 million. To rent a two-bedroom apartment in the city costs about $3,800, while a similar style apartment outside of the city centre is about $2,500. Wages in Sydney are high with the average household income (2016) $160,000 per year. Sydney is rated the 25th most expensive city in the world for expats with housing, food and electricity being the biggest drains of finances.

Here are some examples of what typical items and services cost in Australia:

Sydney is the economic capital of Australia and is home to the country’s largest businesses and multinational companies. There are many jobs in the financial, insurance, healthcare, retail and manufacturing industries with the majority of expats working in the central business district (CBD). Workplace culture in Australia is centred around many family-friendly practices such as generous leave packages, sick and carers leave as well as flexible and work-from-home days in some cases. Those commuting to work can choose to do it via train, bus or ferry. Although traffic in Sydney is horrendous, there are plenty of affordable public transport options instead.

How do you get your pounds to Australia? Speak to a currency and payments specialist. We recommend Smart, ranked “Excellent” on Trustpilot for money transfer and currency exchange.

If you do plan on getting a job once you arrive in Australia you will need to explore your visa options unless arriving in Australia as a resident or citizen. The department of immigration is the best place to explore visa options and determine which path is the best for you. Many international and British companies have offices in Australia so sometimes a corporate transfer opportunity is available. Otherwise there are a number of skilled professions that are in demand in Australia and offer a relatively easy pathway to migration.

Where to live in Sydney

Where you choose to live in Sydney will depend on your budget, how close you want to be to the city centre and what activities and scenery you want to surround yourself with. Generally speaking, the city and the beaches are the most expensive, the northern suburbs are also more prestigious, the south suburbs are quite trendy while to the west there are cheaper areas. Here are some of the popular suburbs where many British expats choose to live. 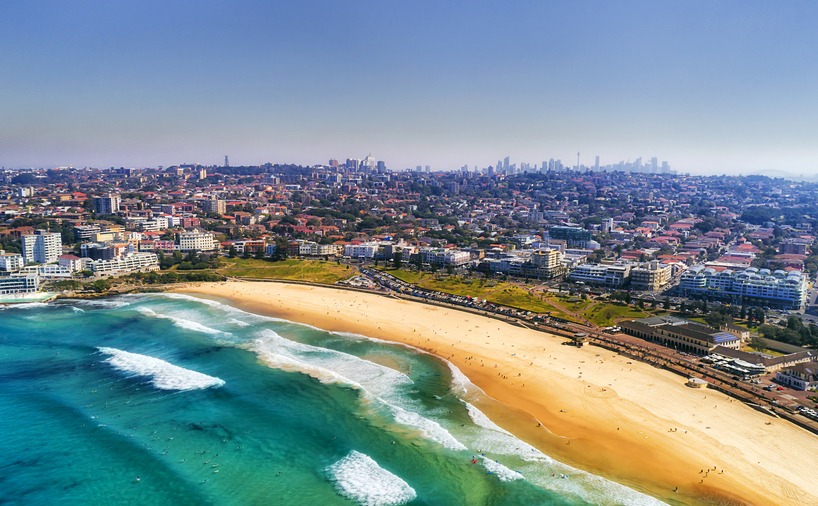 The Eastern suburbs include the beaches of Bondi, Clovelly, Tamarama, Coogee and Bronte. The majority of expats settle in the Eastern suburbs, for at least a period of time, due to its fun holiday vibe and close proximity to the city. Health and wellness are prevalent in this part of Sydney with surfing, yoga, exercise and healthy eating a focal point in many people’s lives.

The Northern Beaches include Manly, Balmoral and the Lower North Shore. Those working in the city can enjoy a pleasant ferry ride from Manly Beach to the CBD each day, taking in views of the Oprah House and Sydney Harbour Bridge along the way. Manly is more upscale than Bondi and is much more laid back. Balmoral Beach has a low key local feel, but is a bit harder to reach downtown with a 30-40 minute bus ride. The Lower North Shore includes Lavender Bay, Kirribili and Crow’s Nest. These spots present good property opportunities, and are in a great central location.

The city and its surrounding suburbs of Surry Hills, Paddington and Balmain are great for people who want to live right near the CBD. Surry Hills is a lovely area with lots of cafes and a great nightlife scene. Paddington is full of designer shops and has a great food scene. Balmain has an English charm and is full of young families.

The city and its surrounding suburbs of Surry Hills, Paddington and Balmain are great for people who want to live right near the CBD.

Often expats are torn between choosing Sydney or Melbourne as a place to relocate or buy property in Australia. If you’re tossing up your options here are some differences between the two major cities. People choose Sydney for its world class beaches, its stunning harbour and its warmer climate. Sydney has a more corporate feel than Melbourne with many multinational companies having offices in Sydney. The climate in Sydney is warmer than Melbourne and though winter in Sydney can get chilly, its weather tends to be warmer and more stable than Melbourne’s.

Melbourne is often described as a trendy and metropolitan city that has some of the best shopping and dining in the world. It is the most culturally diverse city in Australia and currently attracts more interstate migration then any other place in the country. Melbourne does have beaches however they are outside of the city and are not as inviting at Sydney’s. Melbourne’s central business district is on a riverbank instead of an ocean and where Sydney has a grand and corporate feel, Melbourne is more eclectic, stylish and down to earth.

Looking to invest in Sydney real estate? You are not alone. Many people from around the world choose to buy in Sydney due to the appeal of the city, the stability of the economy and the strong returns that the property market historically yields. The process of buying property in Australia differs depending on if you are a citizen or resident, or a temporary visa holder or non-resident. Here are some considerations when buying property in Sydney.

The type of property you can buy

Non-residents are not able to buy established dwellings in Australia however are able to buy a new dwelling with FIRB approval (see below). A new dwelling is considered anything that hasn’t been lived in before and does not include renovated or refurbished properties. There is a restriction on how much of a new development (pre-construction) can be sold to foreign buyers; currently only 50 percent of the total inventory can be purchased by non-residents of Australia.

When purchasing property in Australia stamp duty must be paid by all buyers, this is sometimes called land transfer duty. The amount foreign buyers pay is higher than citizens and residents of Australia. The stamp duty rates differ between states and went up significantly in 2017 in an effort to cool the real estate market which was being stimulated by significant overseas investment. Stamp duty is a tax calculated on the purchase price of the property. There are online stamp duty calculators to help determine how much will need to be paid on your investment.

Registering yourself when buying property

Non-residents and temporary visa holders must register with the Financial Investment Review Board (FIRB) before purchasing property in Australia. FIRB is a government entity responsible for ensuring foreign property investment conforms to government requirements and that investors receive the guidance and support they need when purchasing property in Australia. Getting approval by FIRB is straight forward and typically takes about two weeks after lodging an application.

Australia is typically considered a safe place to invest in property hence the popularity of the country with foreign buyers; Sydney in particular is an investment hot spot. Australian properties have enjoyed consistent capital growth with property prices doubling every seven to ten years. Population growth, housing undersupply and investment appeal are some drivers of Australia’s strong housing market. Besides being a good financial investment, Sydney is simply a desirable place to live, attracting people from around the world wishing to invest in the Australian lifestyle.