Embracing the culture and customs of Portugal

If you are planning to move to Portugal or buy a property here, it is likely you will want to make the most of local life and embrace the rich culture and customs that Portugal has to offer. We share our the key Portuguese traditions and habits to be aware of, from the perspective of a UK expat.

There is a wealth of good food and drink in Portugal and the Portuguese eat very well. Nowhere is this more evident than at a special occasion – a birthday celebration is the perfect excuse for a big and delicious cake, and savouries feature prominently on the menu, too. An endless array of traditional dishes will be on display, with various members of the family working hard to prepare the feast, often days in advance of the gathering.

If you’re planning a move to Portugal, find out how you can access medical attention in our free Guide to Healthcare.

The Portuguese, like the Spanish, are night-owls, and tend to eat later than we do in the evenings. Lunch comes at around 1-2pm, ‘merenda’ at around 3-4pm and then dinner could be at any point from 8pm to as late as 10pm or more.

2. Easy does it with alcohol

Alcohol of various kinds is popular in Portugal, particularly the Port and wine that the country is well known for. However, “binge drinking” does not really exist in Portugal – even with teenagers – so, despite a tendency to start drinking rather early in some cases, you don’t often see drunken and silly behaviour on the streets. Like many other European countries, the reason for this is a slow and steady approach to drinking alcoholic beverages, balanced with drinking coffee (usually an espresso) and water. Agua de Pedras is a popular sparkling water, which tastes slightly salty, and is actually rather nice. 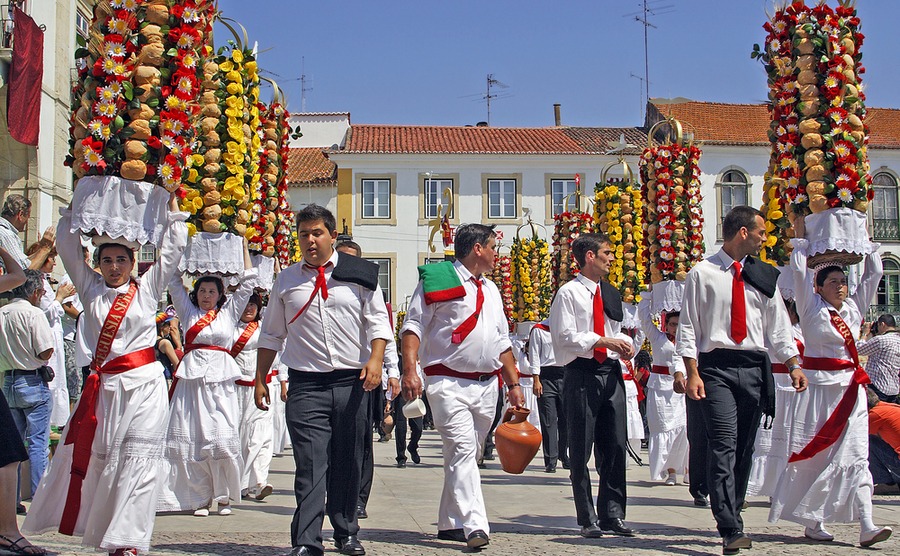 There’s nothing the Portuguese love like a good festa. Pecold / Shutterstock.com

3. Say hello with a kiss and use the right ‘you’

Like many continental Europeans, the Portuguese greet friends (either two women or a man and a woman) with two cheek kisses. With colleagues, it will depend on the level of formality, but a handshake will normally come before any cheek kisses. Generally, you’ll address people older than you and people you should respect or be polite to, such as a client you’ve just met, as ‘voce’, or the formal ‘you’. With friends, you can use ‘tu’.

Respect for your elders is an important part of Portuguese culture. There is a real sense of respect for those in authority and older citizens, as well as the importance of abiding by rules and regulations. It’s an almost old fashioned approach, which is very pleasant to experience, particularly when you see the way young people will step aside to let older people walk down the street, for example. Be sure to respect the police and local officials if you want to be accepted.

The Portuguese can be superstitious, and it’s a good idea not to write anything in red pen, whether you’re signing a contract or just writing out a birthday card, as it’s considered rude to the receiver.