The Itria Valley is one of the most popular areas in Puglia for house buyers and tourists alike. Once you see the countryside with its gently rolling hills, red soil, dry stone walls, olive groves and vineyards, dotted with the coned-shaped trulli and masserie, you’ll be tempted to buy a property in the Itria Valley too.

I have visited four towns in the Itria Valley to see what the big attraction is. They are Alberobello, Martina Franca, Ceglie Messapica and the famous “White City” of Ostuni.

The Itria Valley (in Italian: Valle d’Itria) is an area located in Apulia (in Italian: Puglia) region, in southern Italy. People are initially drawn to this region by the Mediterranean climate and all year-round flights to Bari and Brindisi airports. Yes, the coastline here is wonderful, but when it comes to looking for a home in a peaceful and charming location, many people head inland to the low rolling hills and beautiful towns of the Itria Valley.

The historic centres of these towns draw you in and entice you to explore winding streets between houses with architecture varying from medieval to Baroque. Walk these ancient streets and you’ll be surprised at every turn. Carved doorways, pretty balconies, ornate church facades, craft workshops, cafes and amazing views, these are the joys of life and owning property in the Itria Valley.

While Italians prefer to live in the towns, foreign buyers are enjoying the low house prices on offer in the countryside. You can find detached properties with land and a pool, where you can relax in the peaceful countryside and still have the convenience of a town within a few minutes’ drive. Each of the towns I visited have their own unique style of architecture in the historic centre as well as shops, post offices, doctors, restaurants, bars etc.

Tourists flock to Alberobello to see so many Trulli in one place. The area has been recognised by UNESCO World heritage for it’s charming and unique Trulli, some of which are now home to pretty gift shops and have elevated terraces, so that you can get that perfect selfie with all the roof tops. It is a photographer’s dream as you wander the pretty streets with the scent of jasmine and roses growing round the little doorways. 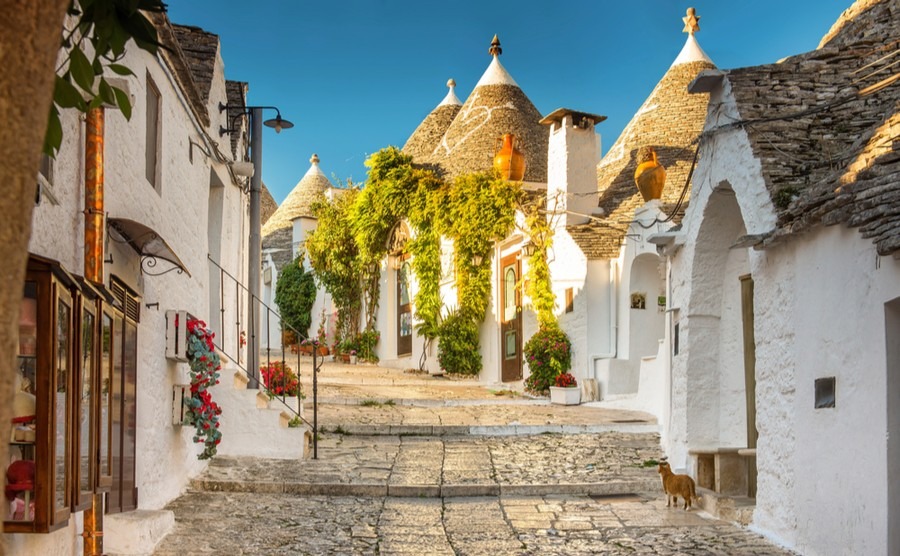 The original trulli were built with stone, and each stone was chipped to fit perfectly, as they were laid dry, without mortar. The walls and pinnacle are whitewashed with lime, but the stone on the cone-shaped roof is left exposed. Symbols painted on the roofs give them an air of mystery and magic, and you can almost imagine them being the homes of little fairy folk.

You will find trulli dotted all around the countryside of the Itria Valley. Those near Alberobello are very sort after. A fully renovated three-bedroom trullo with pool can cost €445,000.

Start your search for property in Alberobello here.

Click here to be put in touch with a trusted lawyer in Puglia for advice about purchasing property.

Arriving in Martina Franca after 1 o’clock I was able to park easily in the street opposite the gate that leads to the historic centre (Centro Storico). Parking was free, which in some towns is often the case during the hours the shops are closed. Martina Franca is quite a large town with a population of over 49,000, so the modern part has all the shops and facilities you’ll need for year-round living. This is also where the famous summer music festival is held called “Festival della Valle D’Itria” which features stunning opera performances. 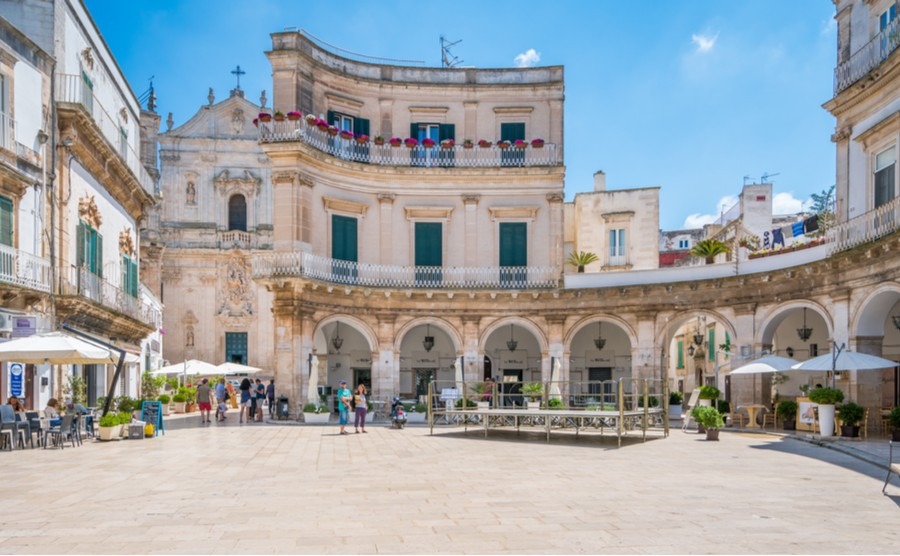 Walking through the Porto Santo Stefano into the historic centre is like entering another world. Immediately to your right is the Ducal Palace which has some rooms open free to the public. The walls and ceilings are covered in colourful frescos. On a June afternoon there was only a handful of people in the palace and the old streets were silent. You can walk around a maze of narrow streets in the shade of the houses and see baroque palaces, metal balconies, porticos, churches and white washed houses with an unusual triangular top to the facade.

Start your search for property in Martina Franca here.

Ceglie Messapica is a white-washed town of Messapian origin, which is a short drive from the white city of Ostuni. Located on a hilly relief in the southern part of the Murge plateau, the houses on the edge of town have superb panoramic views.

Walking around the old town I came across stone streets and steps leading to view points. The most interesting monument of Ceglie Messapica is the Ducal Castle built in the XV century around a Norman tower. 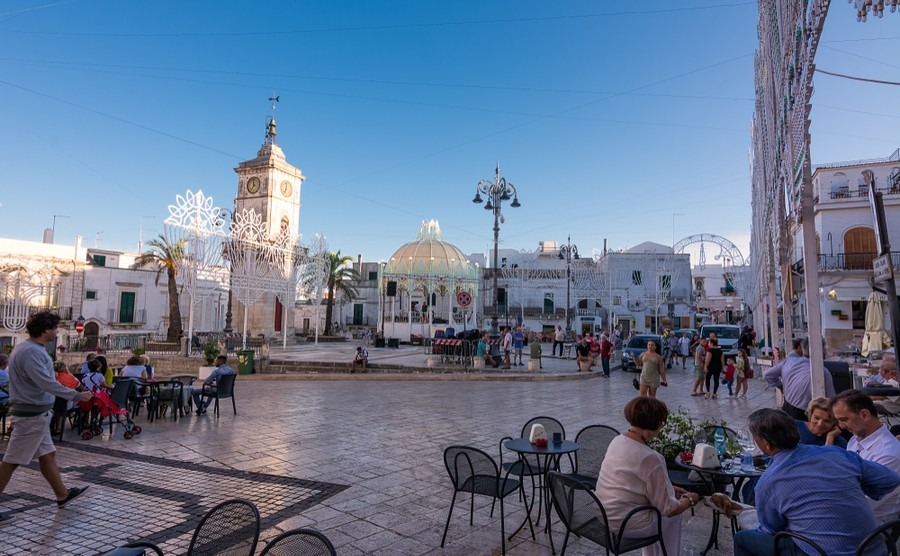 At the heart of the town is Piazza Plebiscito which is recognised by its clock tower. This is where local people gather and many festivals and events take place. In the surrounding countryside I drove past thousands of old olive trees and spotted some of the large masseria farm houses, some of which have been converted into luxury hotels that have also kept their rustic charm. Ceglie Messapica’s biggest claim to fame is its excellent restaurants and the popular food festival in August.

Start your search for property in Ceglie Messapica here.

Whenever I have family come to stay, I always take them to see Ostuni. The old town is such a charming example of Mediterranean architecture perched on a hill top with views to the sea. In the medieval streets that weave around the hill the houses snuggle together under a crisp sheet of whitewash. Looking back at the city from the sea the mass of white buildings dazzle in the sun, thus giving Ostuni the nick name “Citta Bianca” (White City).

Make sure you get the best possible mortgage for your property by talking to your recommended Italian mortgage specialist.

Starting at Piazza Liberta, where you find most of the cafes and restaurants, you can walk up a pretty street, lined with gift shops, to reach the Cathedral at the top. The Cathedral has a lovely rose window and right opposite, we always stop to take photos in front of the beautiful baroque Scoppa arch that spans the width of the small piazza. Under the arch to the right you’ll find an alleyway with a lovely breeze. At the end of which is a stunning view of the Olive groves leading to the sea. Turning right we then explore the little streets heading back towards the Piazza for a Gelato. 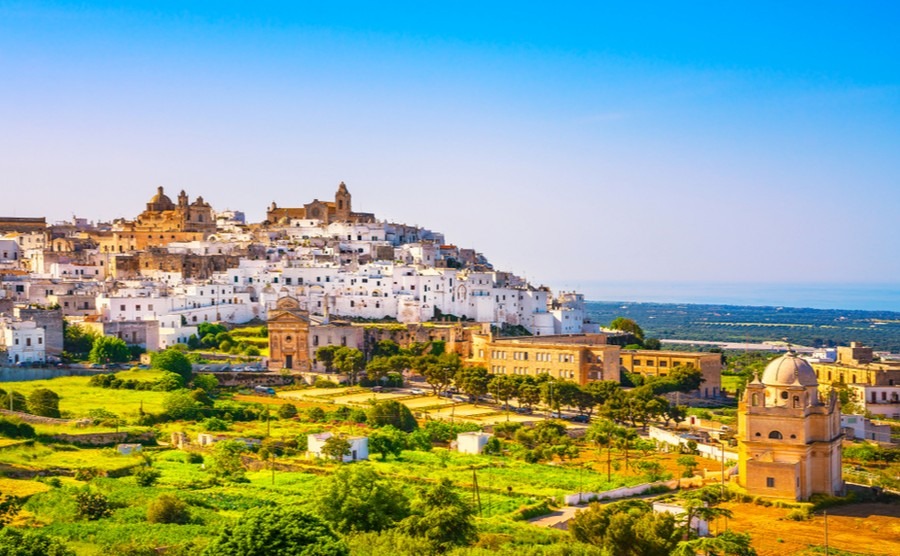 Many people like to live in houses and apartments in the town, close to shops, restaurants, cafes and summer entertainment. Often these properties will have stone star vaulted ceilings and balconies. If you are lucky you may even have a view to the sea. The beach is just a 10-15 minute drive from the town and has been awarded the Blue Flag.

You can find apartments in Ostuni from €55,000 and trulli to renovate in the countryside from €75,000.  Simple country villas start from around €130,000. However, it is worth spending a little more and getting a property that has already been renovated to a high standard.

There are some very well priced properties available, especially when you consider the money and hard work that has gone into renovating them.

Start your search for property in Ostuni here.