Discover the Italian tradition of presepe this Christmas

One tradition that Italy holds dear to its heart is the creation of presepe at Christmas time. But what is a presepe?

A presepe (pl. presepi) is a a central part of the celebration of Christmas in Italy. It’s a representation of the birth of Jesus, put simply: a nativity scene. But it’s not just the crib scene. Sometimes, it’s a whole village, with crafts people and sellers of local produce surrounding Jesus, Mary and Joseph in the popular scene.

Visiting presepi in Italy is a truly magical thing to do during the Christmas season. There are lots of exhibition that host handmade Nativity scenes for visitors to see. Often held in churches, community halls, and other public areas, they are an amazing demonstration of how talented local Italian craftspeople are. 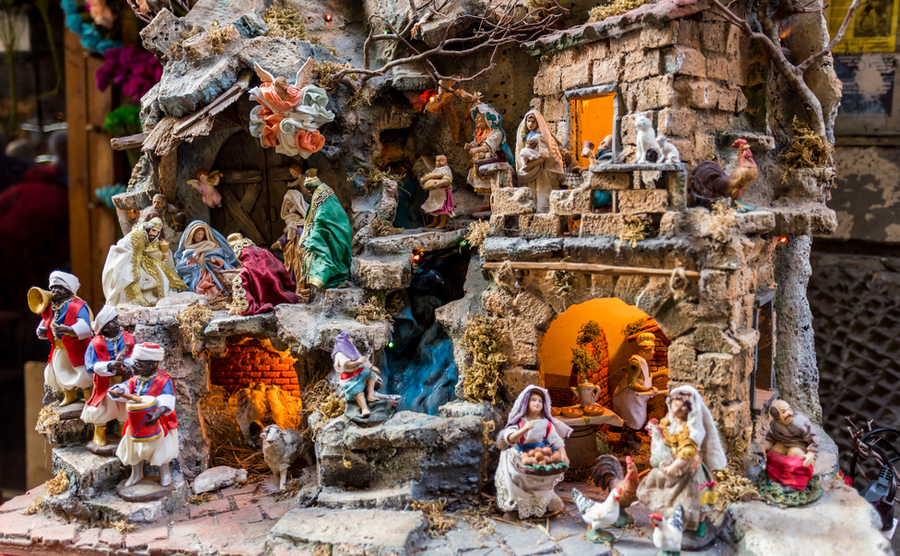 The art of Neapolitan nativity of S. Gregorio Armeno I Image: DinoPh via Shutterstock

Presepi in towns and cities

Often the presepi will be made using local materials, such as stone, terracotta or wood. Therefore they will also reflect the architecture and the skills of local crafts people. You don’t have to be religious to appreciate the detailed workmanship that goes into building the scenery, buildings and figures.

Big towns often have a life sized Presepe on display outside their largest church. A superb one can be seen in front of the Basilica of Saint Francis in Assisi, Umbria. Municipalities in Italy also use some very creative ways to depict the nativity scene. As well as statues and small figures, there are living nativity scenes (presepe vivente) and projections onto public buildings. 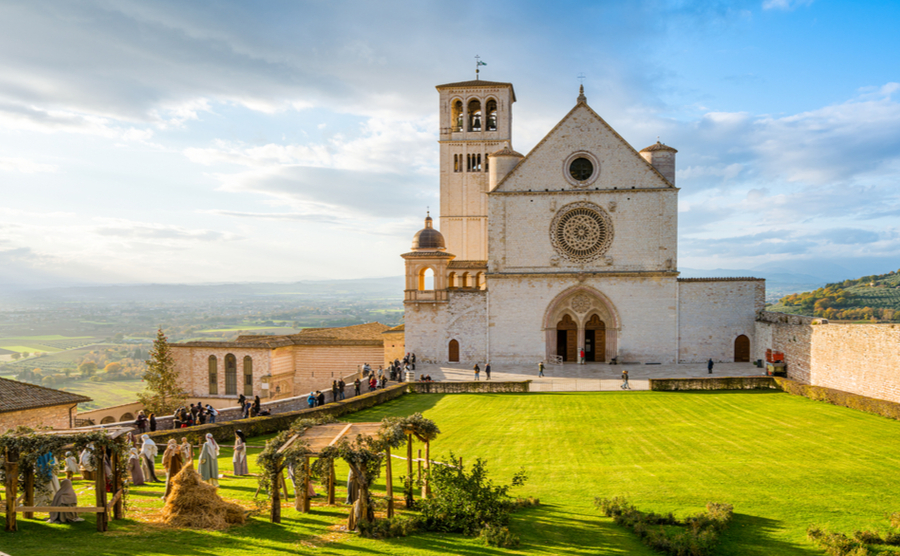 The presepe in Assisi

Presepi in the mountains

In forested mountain areas you will frequently see wood used to build the presepe and figures.  An excellent example of a wooden Presepe is displayed in a log cabin in Santa Cristina Val Gardena in South Tyrol. Considering it is such a small village, it’s amazing that it has one of the largest wooden nativity scenes in the world. These amazing life-sized figures were carved by local craftsmen and are an excellent advertisement for their work.

Santa Cristina has just under 2,000 inhabitants, most of whom are active in tourism and welcome the many skiers, walkers and cyclists who spend their holidays in this picturesque area. There are many festas throughout the year, often involving the local band and choir.

The whole province of Bolzano has stunning scenery and the city of Bolzano has lots of events and probably the most famous Christmas market in Italy.  There are some amazing properties for sale in the province of Bolzano. If you can’t see anything in your price range, simply contact the agent through Your Overseas Home. It is possible to find apartments in Bolzano province below €200,000, they just wont be right near the ski slopes and might need some prettying up. 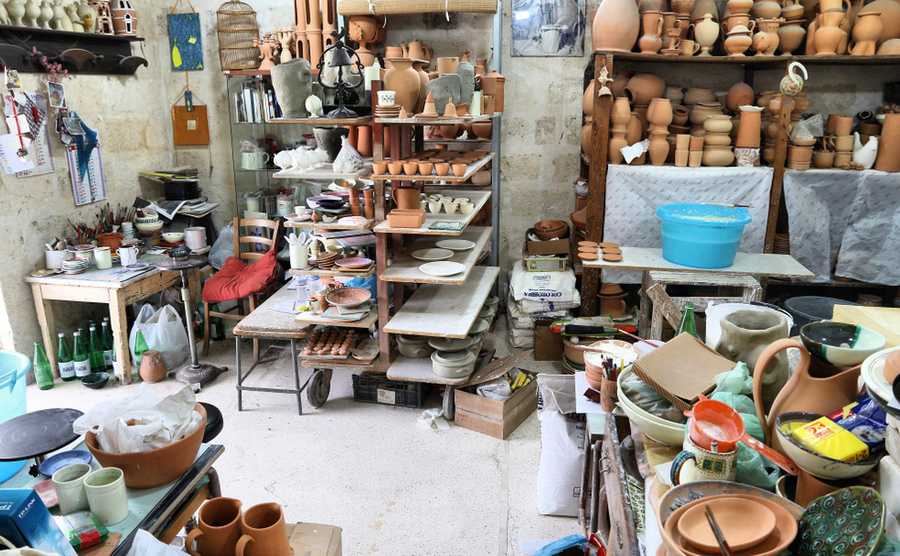 Presepi in the south

In southern Italy, the Ceramics quarter of Grottaglie, in Puglia, is home to over 50 potters. Their shops can be seen in the streets that wind around the castle and in caves below it. Each year the museum within the castle displays handmade ceramic Presepi, including a large crib scene that is on permanent display.

As the Puglia region is well known for it’s Trulli houses, you may also see miniature houses  built in the same style. While in the beautiful city of Lecce, craftsmen work with papier-mâché to create detailed figures and statues for display in churches and to be carried in processions.

Puglia is popular with holiday home buyers and retirees, due to the great weather and Puglia’s low-priced properties. If you retire to a village with less than 20,000 inhabitants, you could also qualify for a lower tax rate. 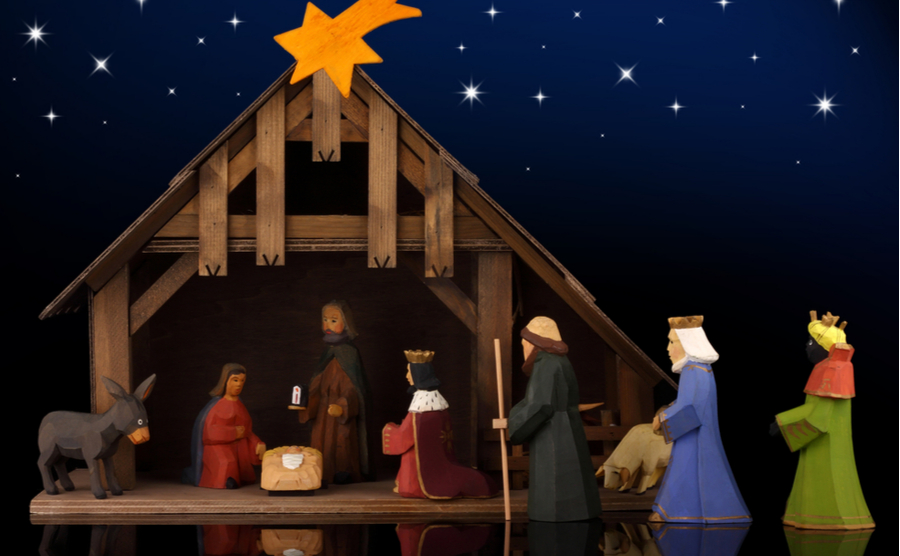 The Christmas tale with a nativity scene.

Presepi in the home

Most families will display a Presepe in their home, either shop bought or homemade. If a member of the family is skilled with papier-mâché, wood, stone or ceramics, they can be a real work of art. Children love to add the people and farm animals. It becomes a fun family activity to collect bark and moss to add to the scenery and build a cave or hillside out of paper mache.

The Presepe can also be handed down through the generations, with new bits added each year. Nowadays, the scene can sparkle with many new features, such as lights, tiny glowing pizza ovens and  streams of flowing water. The family love showing their Presepe to visitors to their home and may even display them near a window.

The crib scene might be in a cave or stable building, with Mary and Joseph looking over the manger. As many families like to illustrate the story of Christmas, baby Jesus isn’t added to the manger until Christmas Eve. The shepherds might still be in the fields, and The Three Wise men don’t arrive on the scene until the 6th January. 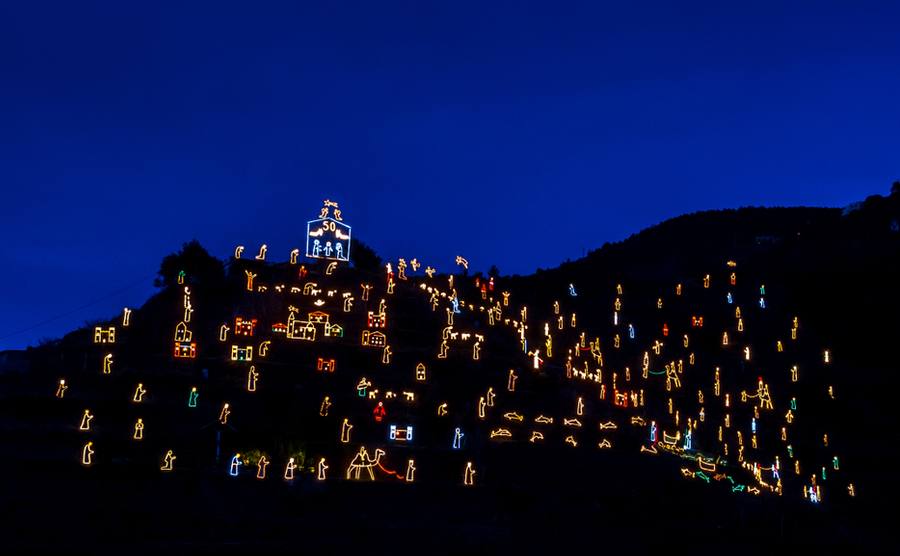 Illuminated on a hillside

In the heart of the Cinque Terre, Liguria, a retired railway worker has built an illuminated Presepe on the hillside using recycled materials. Located on an entire hillside above the village of Manarola it has over 300 life size figures, illuminated by 17,000 lights. It has been listed in the Guinness Book of records since 2007.

Presepe floating on a lake

In Umbria you can see a nativity scene floating on lake Piediluco that is crafted by local artists. These white papier-mâché statues, are particularly beautiful when lit up in the evening, creating reflections on the water. The scene can be viewed from the main Piazza of Piediluco village, located in the province of Terni in Umbria.

Another Presepe on water is in Cesenatico, a seaside resort between Rimini and Ravenna, in the region of Emilia-Romagna. What started off in 1986 as a life size crib scene on a boat, has now grown to around 50 statues on several boats. It is located in the floating section of the “Marineria Museum” on the Leonardesco Porto Canale. 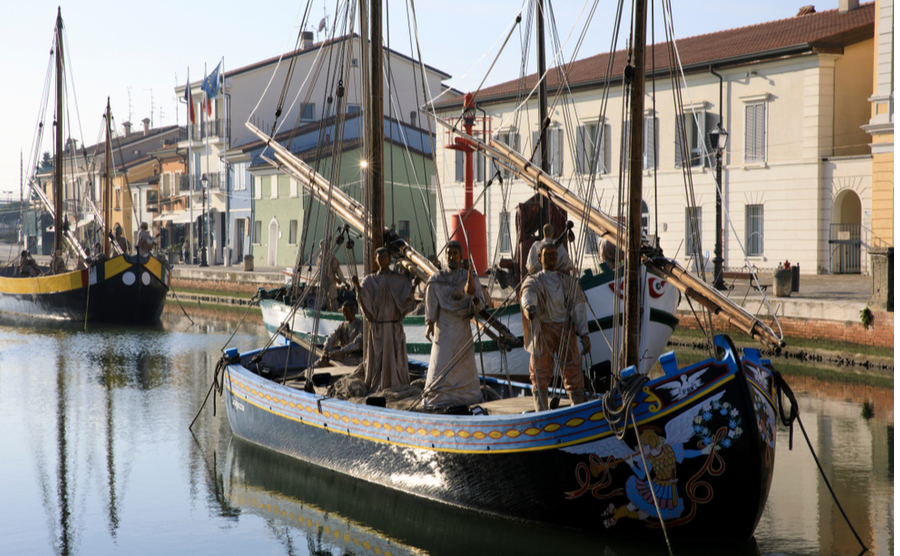 Local life is also represented in the scenes, including the puppeteer with his theatre, the fishermen, the piadina (pancake) maker, the accordion player and a sailor. The faces, hands, feet are carved in pine wood and the costumes are made of canvas modeled on metal net and layered with hot brushed wax.

The Emilia-Romagna region is often overlooked by foreign house buyers, but it is certainly worth taking a look at. Birthplace of Ferrari, Maserati, Parmigiano Reggiano, balsamic vinegar and Luciano Pavarotti, the region has beautiful cities and charming towns dotted along its valleys, golden beaches, and snow-capped mountains. Parma and Bologna always rank well for quality of life. In the countryside €250,000 can buy you a large detached property.

The people in the village scene

A presepe can come in all different sizes. I have seen miniature scenes created inside pots, and large displays that fill half a room. These larger scenes can also include non-religious figures (pastori). Popular characters include the baker, the butcher, the blacksmith, the fishmonger, the weaver, the carpenter, people collecting water in pots and fruit sellers.

As the older generation love to pass down local traditions, craft skills and family run businesses, it’s a great visual way to teach the young. In some villages they might even include buildings and characters recognisable in their village.

While many stores sell plastic characters, the most famous place to buy figures is from a traditional “Presapaio” in Naples. These skilled artisans create handmade figures representing people from the past up to the present day. Such as, pizza makers and caricatures of politicians and celebrities. Their shops are open all year round in Via San Gregorio Armeno, also known as Via dei Presepi (Presepi Street). Over 200,000 terracotta figures are made in Naples each year. 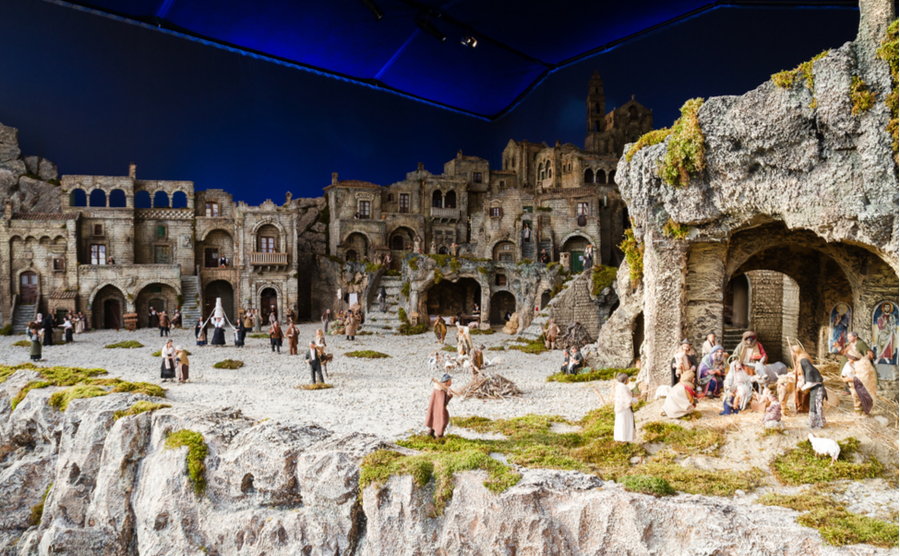 Rome’s international Nativity crib exhibition called “100 Presepi”, takes place under the colonnade of St Peter’s Square from 8th December until 8th January. In addition to contemporary replicas of traditional 18th and 19th century Neapolitan and Roman nativity scenes, there are modern versions made from terracotta, wood and papier-mâché, as well as unconventional materials such as sand, rice and metal. There is also a open air nativity scenes in St. Peters Square and on the Spanish Steps.

In Florence you can see life sized terracotta statues at Basilica Santa Maria del Fiore. There are also beautifully crafted presepi at Villa Quite and Villa Arrivabene. However, all of the churches will have a lovely crib scene.  Among the best, are those at the Basilica of San Lorenzo, Basilica di San Marco, Chiesa di Dante and Chiesa Santa Maria dei Ricci. 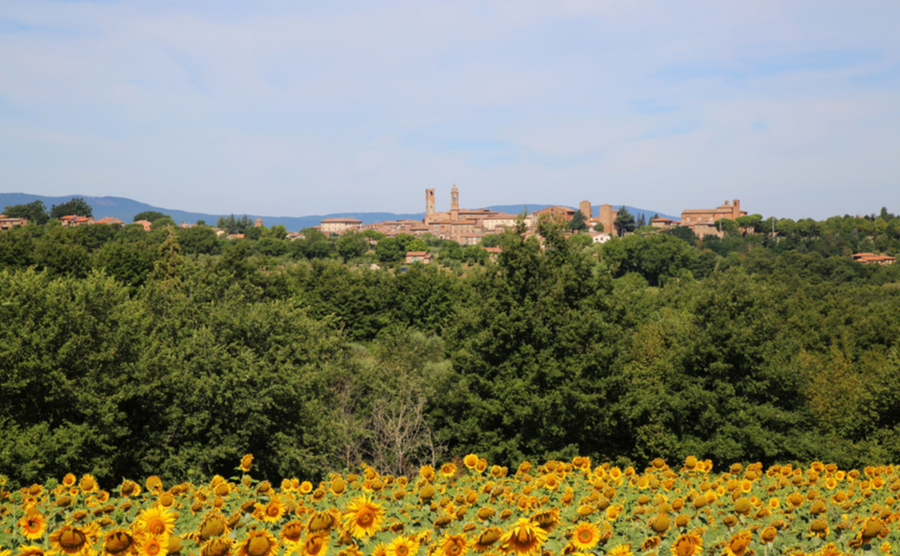 Citta della Pieve, is a village with less than 8,00 residents located just 50 minutes from Perugia, Umbria. Local volunteers have created a scene spread over eight rooms in the basement of Palazzo della Corgna. It has over a hundred statues made of papier-mâché, terracotta and resin.

There are a number of reasonably priced farmhouses and villas for sale in the surrounding countryside. You can even find large stone farmhouses waiting for someone with vision to come along and renovate them.

Fosciandora near Barga, in the province of Lucca, has only 561 inhabitants, yet they manage to transform the whole village into a living nativity, including the bars, shops, and traditional trades. The area also hosts wine, chestnut and shepherds festivals during the year and has recently received funding for a multi-purpose sports area. It is also on a trainline from Lucca. Property prices in Fosciandora start at €53,000.

Christmas events in Italy can be seen from 8th December to 6th January. On the 6th January towns will commemorate the arrival of the Three Kings in Bethlehem. In some places they will do a procession through the town. If the town has a living nativity scene, they will go there to give their gifts to the baby Jesus. This is usually the last day that the Presepi are on display.