Moving to Italy? With the “man with a van” you can

We spoke to the “man with a van” who has been moving people’s belongings to Italy for the past 12 years. He kindly shared what he has learned about moving and driving in Italy.

Gordon of Eurogearshift comes highly recommended among expats in Italy, as the man to go to if you need anything moved between the UK and Italy. If you only have a small amount of belongings to move to Milan or as far down as Puglia and Sicily, his 12 cubic metre van can take your full or part load.

Many properties in Italy are difficult to reach with a large removals truck. This is when an experienced van driver comes in handy. In these circumstances it’s reassuring to have your valuables transported by someone you trust. He’s even got an access box and open trailer. Great if you are reluctant to leave your special car behind. 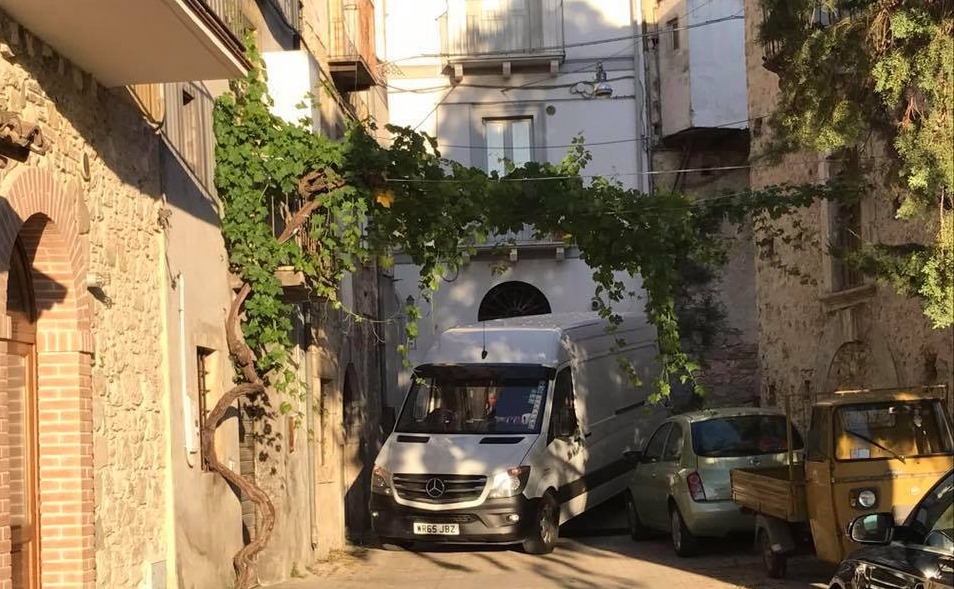 Have you come across many people moving from the UK to Italy?

Yes, I have been moving people from the UK to Italy for the last 12 years and the numbers appear to be increasing, although that could be just that more people that are planning moves are finding my service as time goes by!

Has there been an increase in people moving to Italy this year?

From my point of view, yes, it does seem that way. As soon as the ‘lockdown’ was eased in Italy back in early May, I suddenly was gathering vastly more enquiries for people moving to Italy.

Where in Italy are they moving?

I’ve seen UK people moving to Puglia, Sicily, Umbria, Tuscany and Lazio. I’ve also moved Italians who’ve been living in the UK for some years and who have started jobs in Veneto, Milan, Rome, Siena and Florence.

Are they generally moving to cities, villages or countryside locations?

I would say, mainly countryside locations for the second home buyers; cities for the students and younger workers like teachers, doctors and newly graduated scientists even!

What types of things do people want to take to Italy?

The second home owners tend to order up from online stores in the UK. Things like kitchen furniture, tables, benches, sofas and beds. I recently moved a restored Welsh Dresser, double framed iron bed and a shabby chic set of drawers from (mostly) ebay, into a Trullo in Puglia! 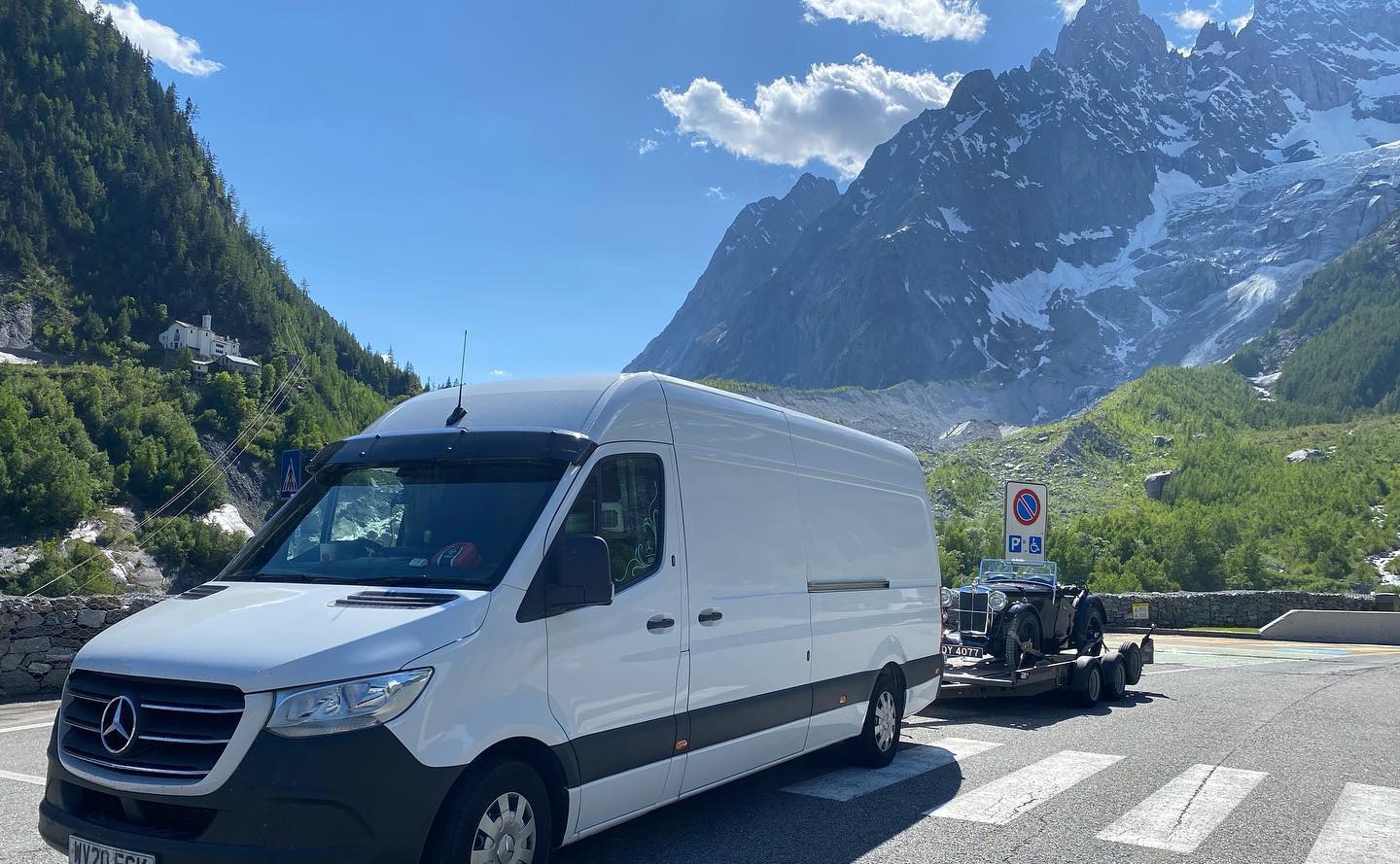 Taking an MG to Italy

I have another regular customer who spends part of his year in the mountains of Umbria tending to his olive orchard, fruit trees and beehives! He also creates liqueurs, builds horsefly traps and is always creating wonderful things from all kinds of materials that I transport to him on a fairly regular basis! Obviously, students and Italians who are moving, all want their belongings transported and taken to Italy.

Is there anything in particular they say they wish they had taken with them before, and then sent for later?

People tend to regret not stocking up on PG Tips, marmite and Quakers porridge oats! Often included in later orders will be a Tescos grocery order! Also, fans for the heat!

Having travelled to so many places, do you have any favourite areas of Italy?

I would say my favourite part of Italy is Umbria. Maybe that is because I have been to so many countryside places in that region and experienced so many serene, peaceful and quiet mountain top places. I suppose, like anything else, when a place is so familiar to you, it tends to feel homely. 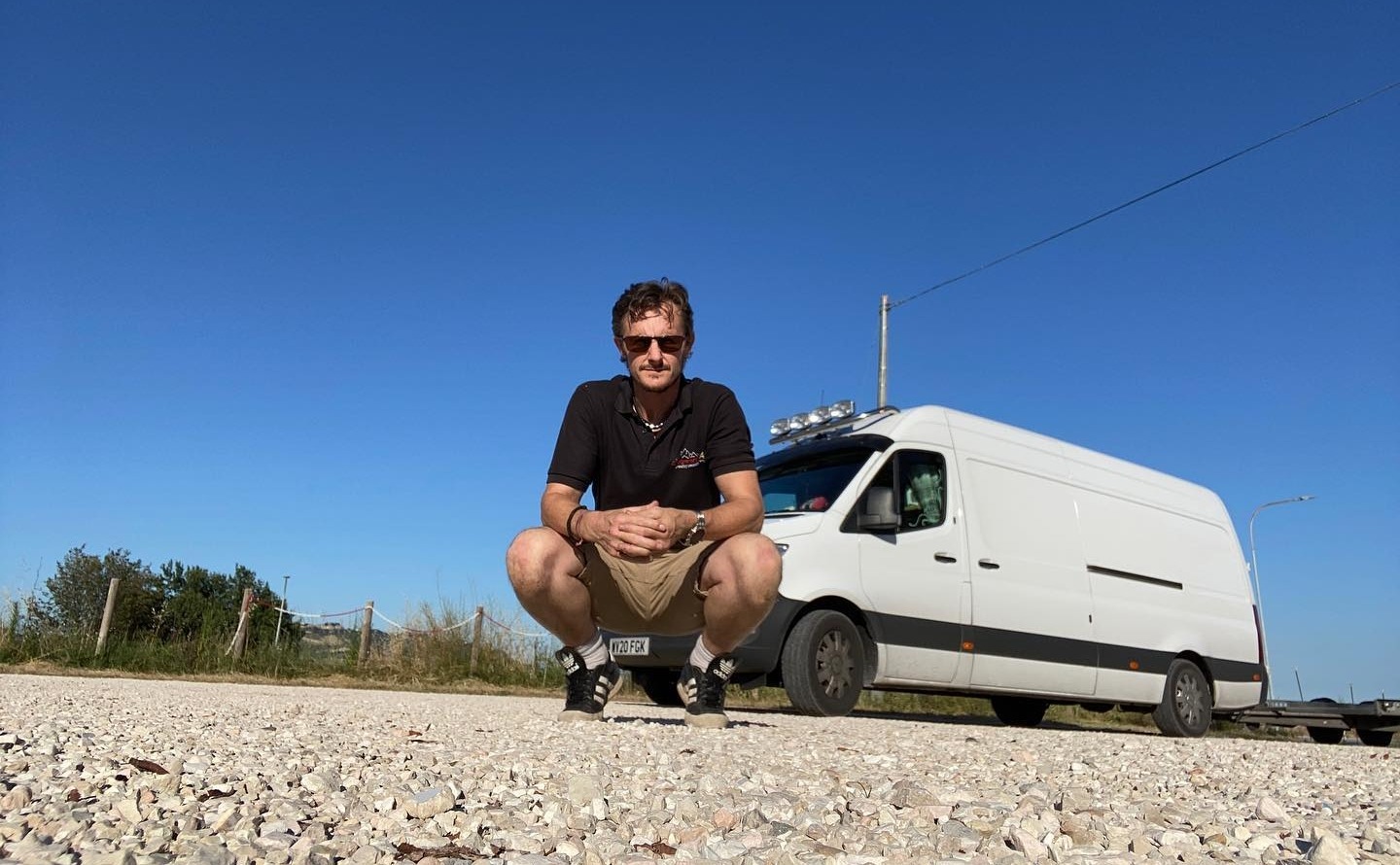 If I were to move to Italy, I’m pretty sure it would be to the rurals of rugged Umbria. Having said that, Tuscany is also beautiful, but I always feel it’s just a little too manicured compared to its neighbouring region. I also love the Amalfi for its awesome coastline; and Puglia too is gorgeous, with all it’s pretty Trulli and white cities and villages.

Any tricky places to get to?

Too many to list!!! From the walled cities of Le Marche to the tight, rural roads of Puglia with their jagged stone walls… Abruzzo too has challenged me! Italy was not designed with the 7 metre Sprinter van in mind! Sometimes, it’s been impossible to reach certain houses and the Piaggio Ape’s have been summoned to the Piazza to help on occasion!

Have you been able to move through Italy, during the Coronavirus pandemic?

When this pandemic was first announced and Lombardy was about to go into ‘lockdown’, I was on my way there and parked up for the night near Dijon, France. I had a dog on board for a customer in the Tuscan mountains and was faced with a decision: Do I turn around, as most were advising me? Or do I find a way around Lombardy and hope for the best! I opted for the latter and headed for Menton, just near the Imperia coast, as a way to avert the region.

There were no checks, no stops and all was clear. To cut a long story short, I got around all the regions where I had deliveries (Umbria, Tuscany, Le Marche, Veneto) and on the last day, just as I was about to head out and back into France, the whole country locked down! But again, not a single check as I crossed through the regions (Veneto to Aosta) and up to Mont Blanc tunnel. All was clear again.

I think I could have carried on throughout the months that Italy was locked down, in hindsight. But at the time, there were many saying I will get stuck and that I got lucky the last time! So, I resisted and found some UK based work (subcontracting for Argos home delivery!). Since 3rd May though, I have never been busier! Back and forth almost twice as much as usual!

How has it affected your business?

If anything, it has affected my business in a very positive way! I have theorised that with all this talk of a ‘second wave’, those who were considering a move to Italy decided to go for it between ‘first and second wave’; and those who had homes there already were deciding to spend any possible future ‘lockdowns’ in Italy, rather than the UK. And so naturally they would be needing supplies and ‘stuff’ taken out there!

When people hire you to move items to Italy, what paperwork is required?

Well, an inventory of their goods is always required. And I ask customers to fill out an online form that is tailored for my business. This is really just so that any customs or roadside authorities who want to question what I’m doing and what I’m carrying, can be satisfied that everything looks official and professional. If a commercial company hires me for transport, then a CMR document is required.

Can you move pets?

If I have the permission in writing from the pet owner, and if I have that letter with me, then I am able to transport one pet at a time, yes. To transport more than one pet, I should be registered with DEFRA, have my van fitted out with a number of features conducive to pet transport, and have a drawn up back up plan for the pets, should they become ill!

Ooh! Plenty!! Double skin cardboard for the boxes, if one is packing with heavy items. Try to use lots of smaller boxes rather than just a few massive boxes! I’ve had people putting over 70kgs in a box once! It took two of us to lift it into the van! So now I specify to people, only 25kgs maximum for a single box!

Medium size removal boxes are the best and should be filled to the top if possible so that stacking doesn’t crush half empty ones. Packing tape should always be used and I always ask my customers to label each item with their name, destination town and a number that enables me to ensure every box or item arrives that was loaded onto the van (eg, 1 of 35, 2 of 35 etc)

Bubble wrap is good for pictures, mirrors and lamps etc. Furniture can be blanket wrapped by me for transit, but some pieces are fragile or very old and so some customers like to add extra protection by way of more bubble wrap or cardboard of course.

What’s the best route down to Italy from the UK?

To drive, as a tourist, to Italy, perhaps the most straight forward, shortest route is from Calais, to Namur (Belgium), down through Luxembourg, into France near Strasbourg and through Switzerland. The tolls are minimal this way, although there is a €50 charge for the motorway vignette in Switzerland.

I can’t really go this route because customs in Switzerland demand bonds are paid before entering, and there are customs issues. So, I used to go the route across Germany and down through Austria across the Fernpass. But Germany has been undergoing a massive motorway upgrade for years now and this adds to the huge traffic problems that always seem to be present throughout the country. So, I avoid that route now, although I miss the stunning views of the Fernpass!

I prefer to go through France now and pay the extra tolls. The motorway is almost faultless, very little congestion and the rest areas are wonderful! I head towards Reims, Troyes, Dijon, Geneva and up to Mont Blanc.

Any tips for driving in Italy?

“When in Rome, do as the Romans do…!” That’s how I cope with it anyway! In the cities, it’s ‘every man for himself’ and you have to blend in or get left behind! It can be fun, I find!

On the autostrade, as with UK motorways, always stay in the non-overtaking lane, unless overtaking!! You will soon know about it if you don’t of course! And when the lights are beaming in your rear-view mirror from two inches behind your rear bumper, best to just move over and remain calm!

Tell us about your experience with “A new life in the sun” on channel 4?

This came about when one of my customers asked if I wouldn’t mind being filmed as I turned up in Wrexham for the collection of her goods. I got to meet the producer and he was asking if I knew other people who would be interested in being part of the TV show. So, I asked a couple of my customers and some of them have agreed. It would seem that I might be part of a number of episodes now! They air the show in January 2021, as I understand it and are keen to source Brits moving to Italy!

Thank you to Gordon for taking the time in his busy schedule to share his experience with us. He was last spotted delivering a jeep and a van load to Tuscany. For further information on Registering and owning a car in Italy (and driving it!) see my earlier article on Italy Property Guides, or Driving in Italy: Fiat or Ferrari?.