You loved the movie, now buy the house!

Ever watched a movie and thought “I’d love to live there”? Being somewhat photogenic, Italy has been the luscious backdrop for dozens of movie greats. But where are they? Let us take you on a trip to Italy’s most famous film sets…

No matter how weak the story line, I can watch a film showing Italy, over and over again, just to see the Italian locations. I watched Inferno just after visiting Florence, and spent most of the film spotting places I’d seen. “Look there’s the Boboli gardens, the font in the baptistery, and Palazzo Vecchio”.

Ready to go? Get your free Viewing Trip Guide today.

Having a film crew in town can be a big to boost the local economy. Especially if the film does well and attracts “film tourism” to the area. The Mayor of Matera estimates that the influx of hundreds of No Time to Die film crew, actors and extras, plus the predicted increase in tourism, could boost the towns economy by as much as €12m. 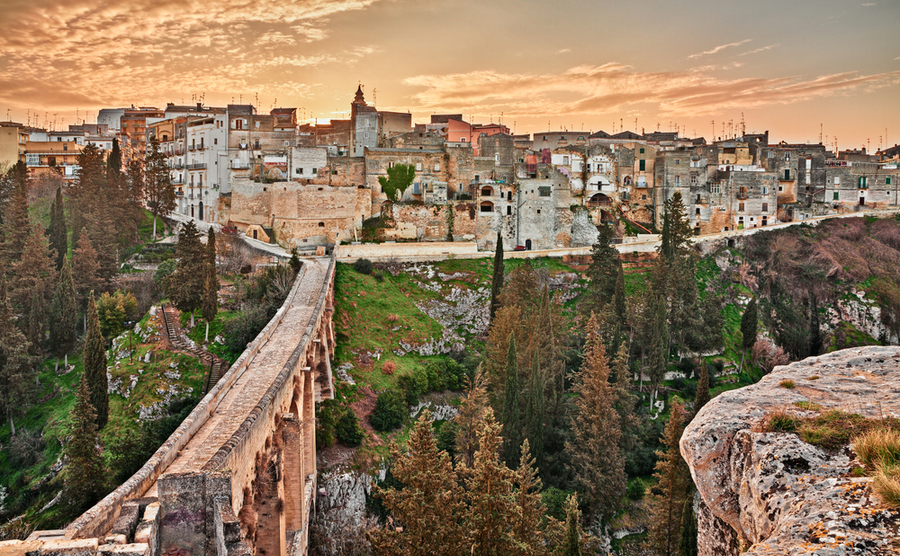 Italy’s good weather, stunning landscape and historic architecture, make it a film maker’s dream. Why build a film set of a historic building, when Italy is full of them? And where else can you find such romantic locations, and dramatic scenery. I fill my camera with photos every time I go out for the day.

There are so many great film locations in Italy, and a long list of films that feature the country. Everyone will have their favourites, from Cinema Paradiso (Sicily) to A Room with a View (Tuscany), Or Roman Holiday (Rome) to My House in Umbria. Here are three examples, old and new.

Basilicata and Puglia – No Time to Die

The latest James Bond film, No Time to Die, has opened in cinemas with great success. The film, which stars Daniel Craig in the lead role for the fifth and final time, also features Oscar-winning Rami Malek as the villain.

The film sees Bond come out of retirement in Jamaica after his old friend Felix Leiter, from the CIA, seeks his help. This leads 007 onto the trail of a mysterious villain armed with dangerous new technology.

Assuming you won’t have Q leaving currency deposits in handy locations for you, get an up-to-date currency quote from Smart Currency Exchange.

Over the years Bond movies have been filmed in numerous Italian locations including Rome, Siena and Venice, as well as Lake Como and Sardinia. However, this time it is the lesser known regions of Basilicata and Puglia that added the stunning backdrop to some of the best stunt scenes in the film. 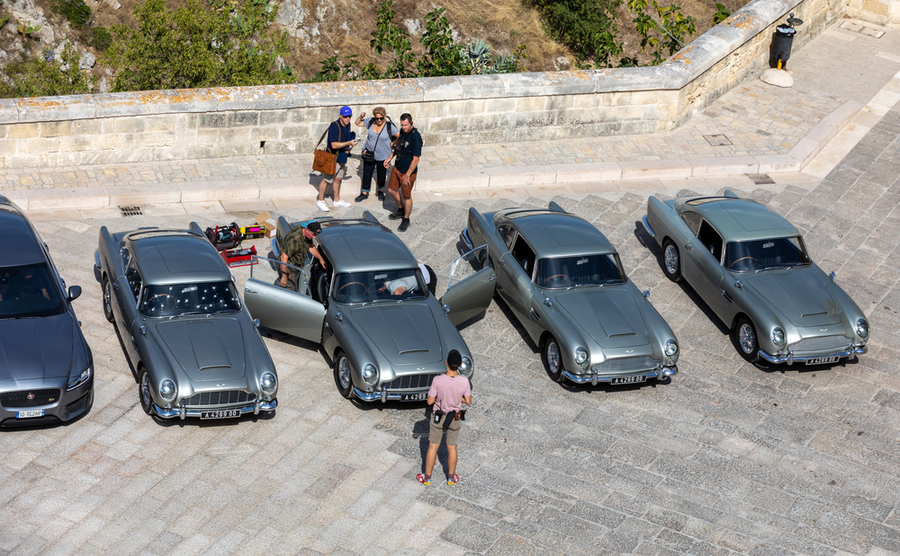 Parts of the film feature Matera, in the southern Italian region of Basilicata, a bridge in Gravina di Puglia, and Sapri, in the province of Salerno. Filming began in Matera in April 2019, with scenes shot in the city’s historic centre as well as its ancient Sassi, the UNESCO-protected cave dwellings.

Matera dominated the trailers for No Time To Die, with a car chase sequence and a motorbike flying over a wall in front of the church. Another adrenaline-fuelled scene from the film is when 007 jumps off a Roman bridge. This was shot at the Ponte dell’Acquedotto of Gravina di Puglia, in the neighbouring region of Puglia.

The Basilicata region is well worth looking at for well priced properties, and it isn’t as remote as you might think. Matera is less than an hour drive from Bari airport in neighbouring Puglia. Gravina di Puglia is less than 45 minutes’ drive.

The film is set In the last days of the Italian campaign of World War II. A French-Canadian nurse (Juliette Binoche) discovers an abandoned Italian monastery. She looks after a critically burned man (Ralph Finnes) who speaks English but claims he cannot remember his name, which is why she calls him the English Patient. During the film he has flashbacks to his past and the war.

If you’re moving to Italy, lucky you! But do read The Currency Guide to Emigration, free to download, to stay in control of your finances.

A large part of The English Patient was filmed in the beautiful Val d’Orcia in Tuscany. In particular, in Pienza, between Piazza Pio II, and the streets of Cosona, a fortified 15th-century complex. The Monastery of Sant’Anna in Camprena is also featured. It is now an Agriturismo, so you can actually go and stay there.

Pienza is a village of just 2,000 inhabitants in the province of Siena. In 1996 the centre was made a UNESCO World Heritage Site as it represents the first application of the Renaissance Humanist concept of urban design. In 2004, the entire Val d’Orcia was included on the list of UNESCO’s World Cultural Landscapes. Property prices in Pienza start at around €80,000. 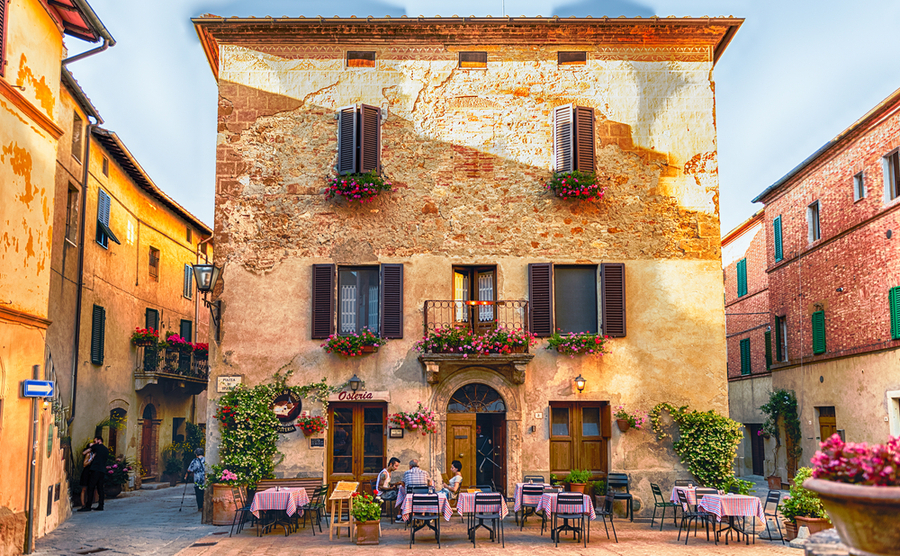 Other locations in The English Patient were along the coastline of Versilia, In particular at the port town of Viareggio, where they chose to film one of the historical seafront hotels. Some of the external shots were also filmed in the hamlet of Ripafratta. You might even spot the fortress and the bridge over the River Serchio. Also note that the hotel in Cairo is actually the Grand Hotel des Bains in Venice.

The backdrop to this beautiful part of the Tuscan coast are hills cultivated with rows of olive trees and vineyards and the peaks of the Apuan Alps. Here there are archeological sites, Romanesque parish churches, medieval villages, fortresses, castles and a lake.

If you love the story, you may be pleased to hear that the BBC is about to turn it into a TV series. The television adaptation is intended to be a new interpretation of Michael Ondaatje’s novel, being written by Emily Ballou. It has a slightly different focus from the film, telling the tale of the four disparate characters in the Italian villa, the supposed English patient, the Sikh bomb disposal expert, French-Canadian nurse and Canadian thief.

Other films with scenes filmed in Tuscany include Tea with Mussolini (Florence and San Gimignano.), Life is Beautiful (Arezzo), Under the Tuscan Sun (Cortona) and A Room with a View (Florence).

Who hasn’t watched The Italian Job? OK, I know there is a 2003 version, but the 1969 original is such a hilariously clever British comedy, typical of the 1960s. It is often voted the best British movie ever made.

Starring Michael Caine as a newly-released convict, he puts together a team of lovable British rogues to rob a case of gold bullion bars from a security truck in Turin, by causing a traffic jam.

We see the gang hiding out in a villa on the outskirts of Turin, which is actually Villa Della Regina

The Italian job begins at the Great St Bernard Pass, high up in the Italian Alps, as an orange Lamborghini negotiates the hairpin bends. Later we see the gang hiding out in a villa on the outskirts of Turin, which is actually Villa Della Regina. Built in the 17th century, the palace stands among Italian gardens, pavilions and fountains. 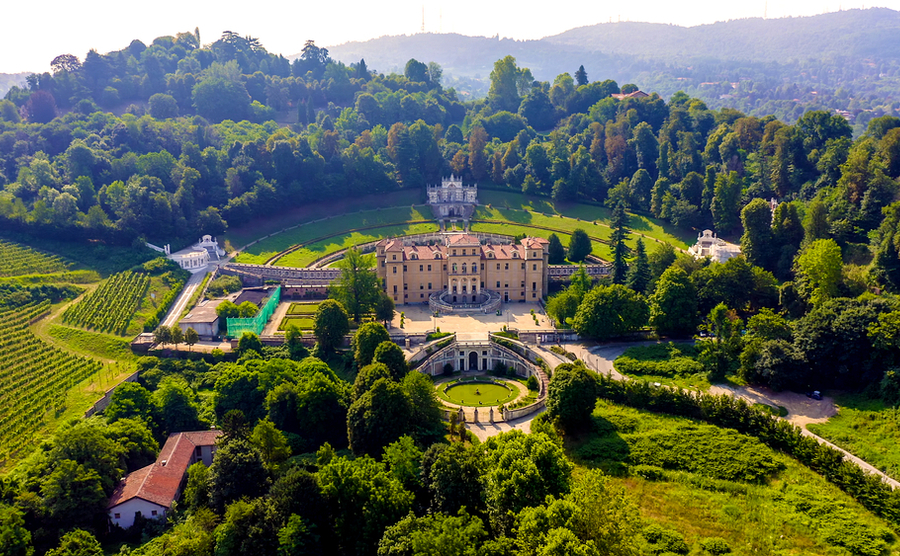 The aerial view of the robbery shows Piazza di Citta in Turin. Then, when they unload the gold they are at the stunning Palazzo Carignano in the city centre. The Palazzo is a fine example of Piedmontese architecture and houses the National Museum of the Risorgimento.

Some of the stunt highlights using the minis, are as they descend the steps of Gran Madre di Dio, and drive up over the distinctive roof of the Palavela. This indoor arena was built for the Italia 1961 Expo, and was then restored in 2006 for the Winter Olympics.

Another famous roof in the film is that of the old Fiat Lingotto Factory, which really does have a race track on the roof. Since the factory closed, the building has been turned into a commercial complex with a shopping mall. However, the Hilton Turin Lingotto Hotel provides exclusive access to the roof top racetrack.

Turin is proud of its “Motor City,” past, as can be seen at the National Automobiles Museum. It is also the birthplace of Italian cinema and has a National Museum of Cinema. Other attractions include the Museo Egizio (an archaeological museum that houses over 30,000 Egyptian artifacts), Valentino Castle, chocolate shops, antique coffee houses and some exquisite royal palaces.

Turin, in Italian is Torino and the region of Piedmont, is Piemonte. Knowing both spellings can be useful when searching for property. Apartments in Turin start at around 150,000. You can also find some very large farm houses for sale in Piedmont at amazingly good prices.