Keep yourself (and your house) cool in a heatwave

With temperatures over 40°C (104°F) in much of Italy last week, I have tried everything to keep the house and ourselves cool! Here are my ten best tips.

One of the joys of living in Italy is the long hot summers, we can plan to go out and be sure it isn’t going to rain. During last week’s heatwave we have instead been staying inside and praying for rain. Not having aircon we have been trying all kinds of methods to keep cool in the house. This is how we survived a summer heatwave.

We have lived in three different stone houses over the years and I can tell you they don’t stay cool in a heatwave. The sun heats the stone and it radiates through. However, it does take longer to do that the thicker your walls are, so a stone house will be cooler than a modern single walled villa. The temperature will also depend on how much of the day the walls are in full sun and the size and amount of windows and doors. I have met British expats who have commented that, “There are not enough windows in Italian houses” and that they would want to have bigger windows to let the sunlight in. But once you have lived here for a summer and realise that much of the heat comes through the doors and windows, you are then trying to find ways to keep the sun out.

2. Keeping the heat out

There is a good reason why many Italian homes have shutters. By keeping them closed during daylight hours it makes a big difference to the temperature. If like us you have stone surrounds on your doors that prevent you from having shutters, then light coloured curtains on the outside will not only shade the glass but also protect the frames from the sun. We attach a mosquito net and a cotton curtain to a piece of baton and screw it to the top of the door frame. At the end of the summer we just take them down and roll them up ready for next year. At night, I tie a bit of cord round the curtain, leave the net down and open the doors wide. Once we feel that the air is cooler outside than in, we put a standing fan in the doorway to suck the cool air in. Ideally, you want a window on the other side of the room so you can get a through breeze. If the air is still you can even put a fan there to push the hot air out. We also put a sheet over our wooden courtyard gates to stop them warping in the sun. 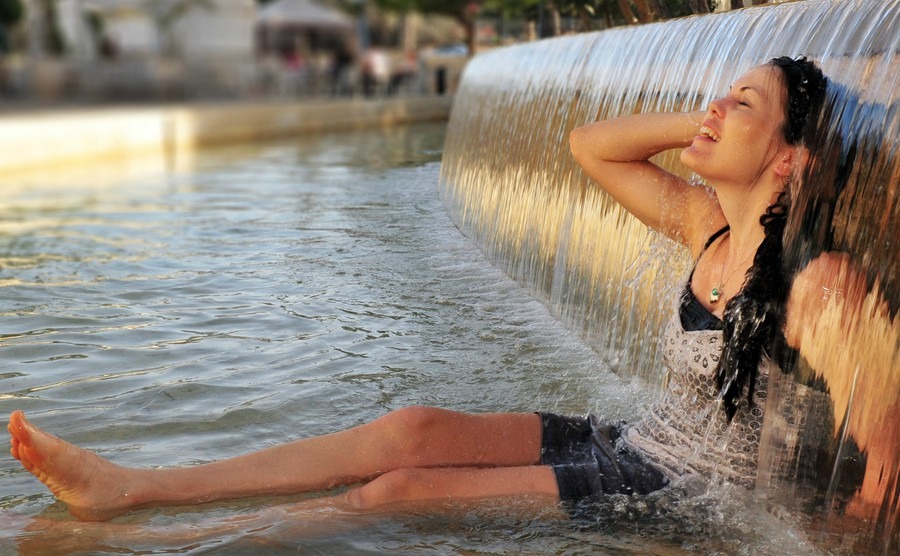 Italian fountains have been useful the past few days

The walls of our house are a combination of exposed light-coloured stone and white painted walls. Even the roof is paved with stone. As white reflects the light it’s the most sensible colour to paint an Italian home that gets a lot of sun. Often you will also see tall trees or vines planted around houses to shade the walls. Any form of shade can make a big difference. We built a veranda along the south side of our bedrooms and that has really helped keep the weather off walls and doors. More modern villas and apartments also benefit from good insulation. By letting the cool air in at night and then closing everything up during the day it will help to keep the cool air in and the hot air out. You can even put a bucket of ice under the fan to help cool the air.

4. Move outside at night

Inside the house we turn off lights and close curtains during the day. We also unplug as many appliances as possible. You would be amazed how much heat just a light bulb gives out, and we certainly try to avoid using the cooker. One trick we learnt from elderly Italians in town, is to turn the television towards the French windows and sit outside in the evening to watch the TV through the doorway. We also have a projector so that we can project films directly onto the outside wall.

In the ten years we have lived here we have always managed at night with just a fan and our bedroom door open to the courtyard. One of the benefits of having high courtyard walls, and all rooms having doors opening onto the enclosed courtyard, is that we feel comfortable about having all the doors open at night. This is the first summer where the temperature has got so hot that we decided to put beds down in the basement (canteena). It is so much cooler than the rest of the house. If your home has a basement I would highly recommend renovating it so that it can be used as a summer retreat from the heat. Ours has a stone barrelled ceiling and we have put sofas down there, making it a great place to relax on a hot afternoon.

One trick we learnt from elderly Italians in town, is to turn the television towards the French doors and sit outside in the evening to watch the TV through the doorway.

A tepid shower or dip in the Roman bath is a pure delight on a hot day. We try and keep the water cool by keeping the water tank in the shade and putting umbrellas up around the Roman bath. As we have an artesian well which goes 150 metres underground the water is always lovely and cool when it is pumped up. We found that the sun used to heat the water in the pipe leading to the courtyard shower so we built a cover for that too. Throughout the day it’s a good idea to regularly run water over pulse points like your wrists, neck, elbows, ankles and behind your knees. I sometimes wet a small towel or t-shirt and just lay it on me. I always have a wet flannel in a plastic bag in the fridge and a water sprayer. 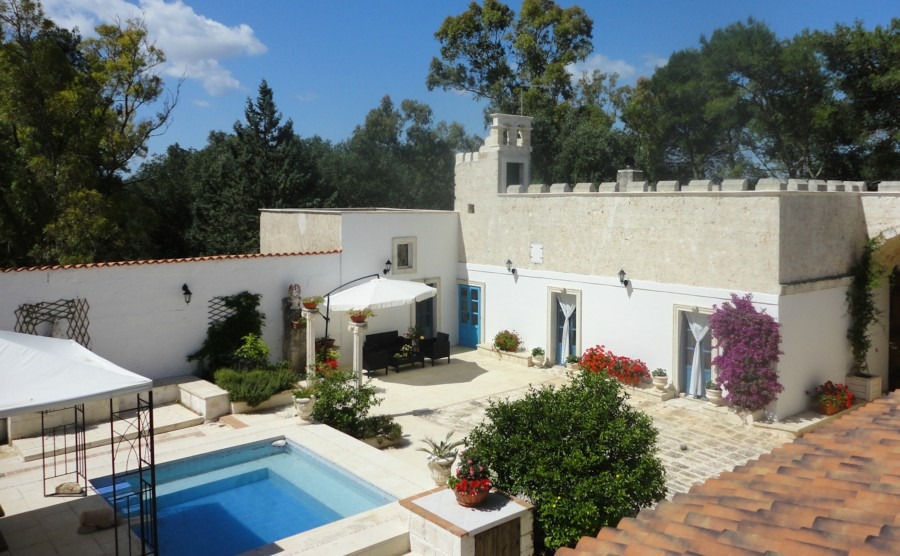 My own Italian courtyard in the sun

I mostly wear lightweight, cotton clothes in the summer and avoid clothes and shoes with any metal on, like studs and zips. One summer I discovered a burnt spot on the top of each foot, and then realised that the flower attached to my sandals had a round metal stud holding it on, and it had heated up. A hat and sunglasses are a must on trips out in the sun, as is suntan lotion. When in the sea or pool you may feel cooler but the sun’s rays will still burn. We try to keep in the shade throughout the hottest part of the day.

After lingering in the freezer department we spend time at the café and gelato stand.

Whether at home or out I try to drink water regularly to prevent dehydration. An ice-cold beer may seem refreshing while you are drinking it, but alcohol dehydrates the body, so not long afterwards you are hot and thirsty again, so it’s best to avoid it. Caffeine increases metabolic heat so it is also recommended to avoid coffee and cola. We mainly stick to water and fruit juice. When we are going out for any length of time I freeze a bottle of water and take out it with us.

A trip to the air conditioned shopping centre is a real treat in August. After lingering in the freezer department we spend time at the café and gelato stand. We do as the Italians do, rest in the shade during the afternoon and then go out for a walk late in the evening. Summer events in town rarely start before 9pm and you will see families out walking at midnight. 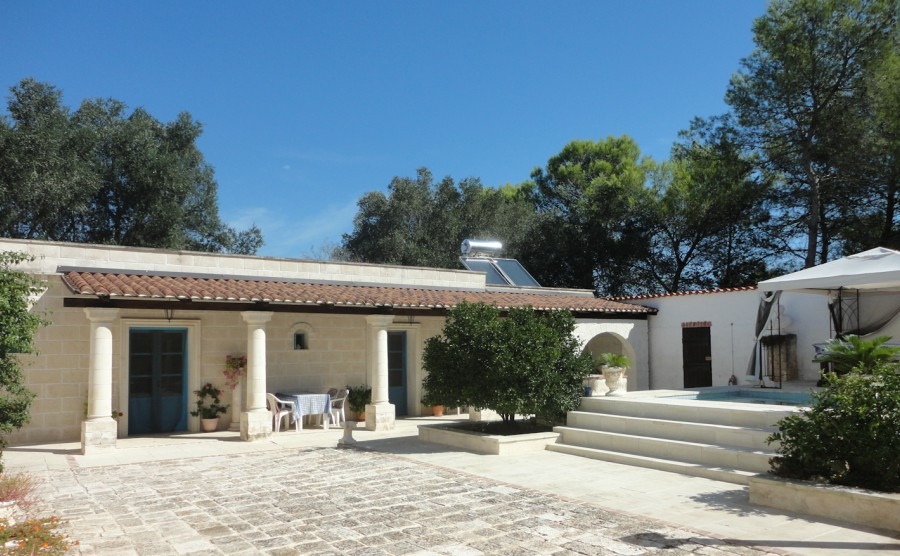 A veranda to shade bedroom walls

The heatwave this year has certainly been way too hot, but it’s only for a short time. We have been very fortunate to have had a lovely spring, and summer started early. For me spring and autumn are the best times of the year in Italy, because the temperature is good and you can get out and about more.

As we look forward to a British autumn and winter, now is the time to make serious plans to move to the Italian sunshine. Don’t suffer another British winter, download our Emigration Guide today.