Italy, the holiday choice of the stars

We look at the hot destinations for the rich and famous, and the cost of owning a property in these areas.

Italian farmers have been working hard on their grapevines, and the Italian gossip grapevine has been just as busy this summer, with a stream of celebrities being spotted taking holidays in Italy. So, where are the popular destinations for the rich and famous?

Many celebrities hoping to get away from the paparazzi choose to holiday on yachts, just stopping off on the mainland and islands to enjoy the beaches, restaurants, shops and historical sights.

The island of Sardinia has 80 kilometres of coastline, where you can find white, sandy beaches, hidden coves and rocks shooting out of a clear turquoise and green sea. As well as stunning scenery, there are towns with a vibrant nightlife, romantic restaurants and the opportunity to treat yourself in the shops. 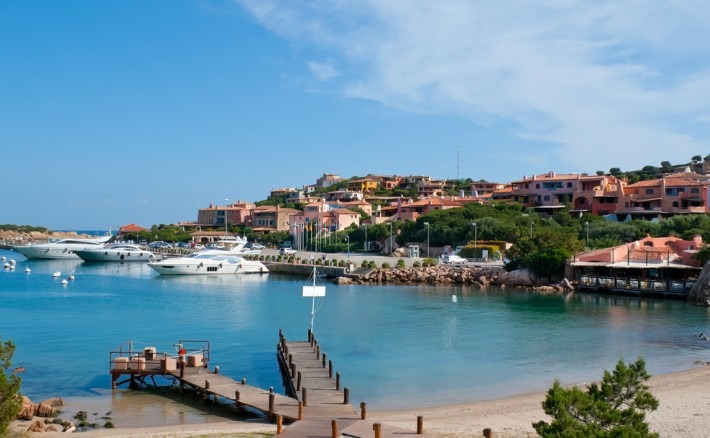 One of the most fashionable destinations is the Costa Smeralda in the North East of the Island. The jewel of Costa Smeralda is Porto Cervo, which is where actor Orlando Bloom and his pop star girlfriend Katy Perry chose to have a romantic holiday this August.

Even while relaxing on a quiet beach, they couldn’t escape the lens of a determined photographer. Photos of a naked Orlando Bloom on a paddle board, were soon all over the media and internet.

Oleanders and Orlando in full Bloom on Sardinia.

Both Porto Cervo and Porto Rotondo are sophisticated towns, full of pretty piazzas and shops and make perfect bases from which to explore the coast.

If you fancy buying a property in Porto Cervo, an apartment will cost you from around €650,000, with villas reaching into the millions. But if you look further afield in the Sassari Region, you can still find village houses and renovation projects for under €100,000. There are flights from the UK to the airport at Olbia.

Island of Capri, Gulf of Naples

Located South of Naples, Capri is famous for its mild climate, history and natural beauty. It has attracted the rich and famous for many years, and was once the playground of the emperors of ancient Rome. Elizabeth Taylor, Grace Kelly and Jackie Onassis are just some of the elegant women who have holidayed here over the years. Now, it is reported to be a favourite destination for the famous singer Rihanna and top model, Naomi Campbell, as well as many other international tourists. 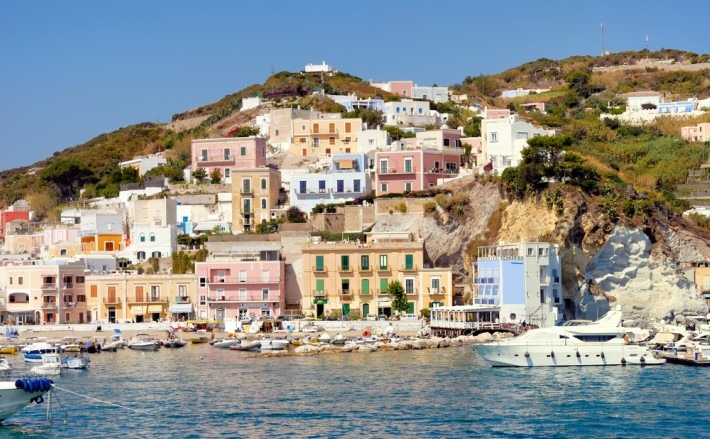 Ponza is the largest of the Italian Pontine Islands archipelago, located 21 miles south of Cape Circeo in the Tyrrhenian Sea. It comes under the province of Latina in the Lazio region. The island has an interesting coastline, which is best explored from the sea to fully appreciate the rocky stacks and grottos. The hand carved cave pools were once frequented by the nobility, who built villas on the island back in Imperial times.

Jacques Cousteau filmed documentaries in the area and over the years a string of celebrities has visited Ponza, including Kirk Douglas, Michael Douglas, Burt Lancaster and Sophia Loren. This summer, the singer Mariah Carey shared photos on her Instagram of herself on a yacht, admiring the lights of Ponza at sunset.

The island is mainly visited by Italians from the mainland. Even people from Rome will make the two-hour journey to Ponza to escape the summer heat of the city, to relax in laid back surroundings, and dine on seafood. If you don’t have a yacht you can easily hire a small boat to explore the coastline.

Hire a boat to discover the most stunning views of the island.

You can catch a hydrofoil to Ponza from Anzio and Formia, and there are also ferries from Naples and Terracina. Boats dock in Ponza’s sheltered port, where the boxy houses are painted in various pastel shades. Few of these traditional Ponza houses come up for sale, but on Rightmove Overseas there is one semi-detached property that dates back to the 1800s, keeping the typical cube shape with dome roof. This three-bedroom house has an asking price of €850,000. For more details, visit Rightmove Overseas.

George Clooney has owned Villa Oleanda, overlooking lake Como, since 2002 and spends time there each year. This summer, he was joined by his wife, Amal, and a group of friends, and was seen outside the Il Gatto Nero Restaurant.

There are some truly luxurious hotels and rental properties around the lake, which have hosted famous people, such as Mick Jagger, Kylie Minogue and Robert De Niro. Mariah Carey stayed in an 18th Century mansion called Villa Napoleon I in Argegno, which oozes Italian charm and elegance, with chandeliers, frescos, fountains and luxurious furniture. If you would like to experience the splendour of this mansion yourself, it is available for rental on Airbnb. The photos alone are inspirational for anyone decorating their own Italian home.

To buy an eight-bedroom property right on Lake Como costs in the region of eight million euros, but further out you can get a one-bedroom apartment with a lake view for under €150,000 (£129,783). Most two bedroom apartments are between €200,000 and €300,000. There are some houses to renovate in outlying areas. 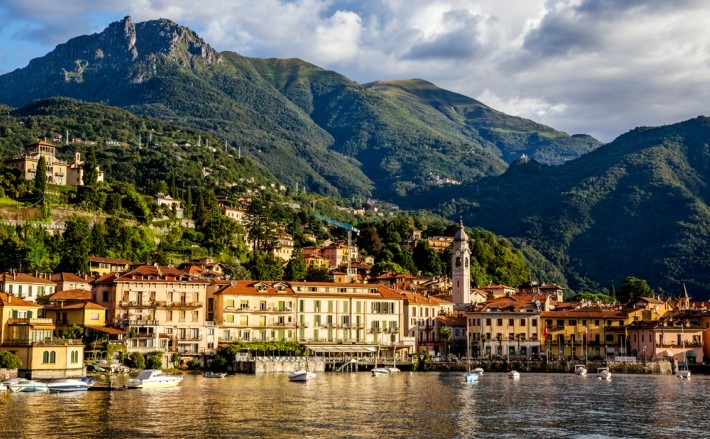 Puglia has always been a popular holiday destination for Northern Italians, who flock South in the summer to enjoy holidays either by the sea or in the countryside. As an agricultural region producing olives, grapes, wheat, fruit and vegetables, it’s visitors can enjoy fresh food in the countryside and also spend days at the beach dining on seafood.

A Masseria is an old fortified farm house dating back to around the 1700s. They had accommodation for the farmer, as well as buildings for keeping animals, farm equipment and storage of produce; protected from invaders by high courtyard walls. Masserie that have not been inherited or are too large and expensive to maintain have now been left abandoned, with many Italians preferring to live and work in towns.

The good news is that many have been renovated and transformed into hotels, and while offering luxury accommodation, also produce their own wine, olive oil and vegetables.

At the end of July 2016, the Pop singer, Madonna stayed at one such Masseria in Savelletri, on the coast of Fasano, between Brindisi and Bari. The Borgo Egnazia is a luxury hotel that hosts many celebrity guests and offers a relaxing Spa, delicious Puglian Cuisine and the opportunity to enjoy a round of golf at the San Dominica Golf Club.

Savelletri is a pretty seaside town with a small fishing port. Its recently renovated seafront promenade has a good selection of seafood restaurants and there is a sandy beach nearby. The population grows greatly in the summer, as many people from Fasano, Bari and Martina Franca have summer homes there. With more and more foreign tourists discovering it each year, Fasano is becoming an up and coming area to buy property. 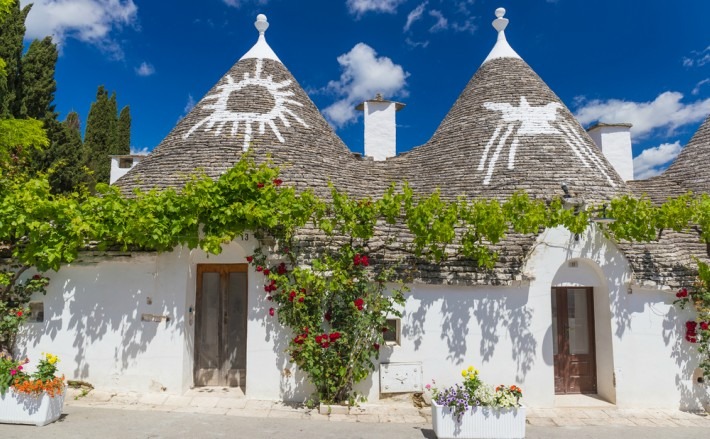 During Madonna’s holiday she also visited the Alberobello Light Festival. This small town has been made a world heritage site due to its unusual district of 1,400 trulli. The conical-roofed trulli buildings were built using limestone, and can be seen dotted around the countryside of Puglia. They were built dry stone so that they could be easily dismantled to avoid paying tax on a permanent dwelling. They did tend to get damp in winter though. They are particularly popular with the British as quaint holiday homes.

Even celebrities buy old character properties to renovate into their dream holiday homes. Helen Mirren renovated a Masseria in Salento, and Sting a farmhouse in Tuscany.