Whether you want to live in a Tuscan village with views of the countryside or in the heart of the Italian country, near a pretty village – Tuscany has properties to suit every budget.

The Italian tourist board is encouraging people to visit some of the lesser-known villages across Italy. So far, they have listed some suggestions on the Viaggio Italiano section of tourist website Italia.it. Let’s take a closer look at five of our favourite Tuscan villages. 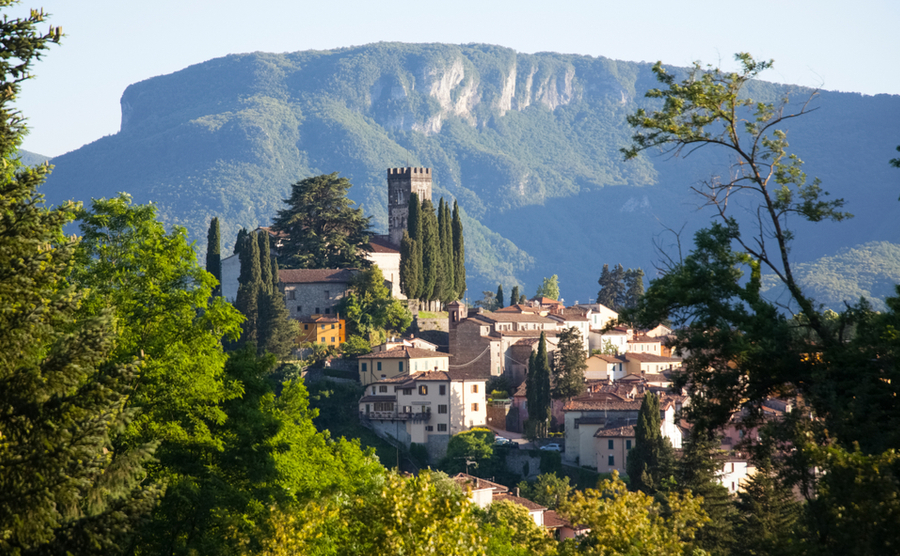 Nestled between the Tuscan-Emilian Apennines and the majestic Apuan Alps, the picturesque village of Barga lies. The well-kept historic centre and village culture make Barga one of the most beautiful villages in Italy. In fact, it has even been awarded the Orange Flag by the Touring Club of Italy. This typical medieval village is surrounded by a perimeter wall and three gates: Porta Reale, Porta Macchiaia and Porta di Borgo. A castle watches over the village and the Cathedral of San Cristofo.

What to see in Barga

Museums of interest in the area include the Giovanni Pascoli House Museum and Antonio Mordini Civic Museum of Barga. If you didn’t already know, Giovanni Pascoli is a famous poet who lived and wrote many odes in Barga from 1895 until his death in 1912. His old home was preserved so well that when it was given to the town, they opened it as a house museum.

The surrounding hills are dotted with farm houses, with lovely views. It’s a great place to go hiking. In fact, the final two stages of the Via Matildica del Volto Santo hiking route goes from Barga to Borgo a Mozzano (18km) then on to Lucca (29.4km)

Barga hosts several festivals over the summer months, such as the Festa della Piazzette, the ‘Fish & Chips’ Festival and the Barga Jazz Festival. The village has restaurants, bars, shops, a tennis club, a hospital, an outdoor pool and a nearby train station.

Property for sale in Barga

Properties needing renovation start at €60,000 and an apartment in a good location can cost from €140,000. Village houses ready to move in sell from €95,000. Prices vary a lot depending on location and the condition of the property. There are some stunning countryside villas in the €280,000 to €650,000 price bracket.  Here are a selection of properties in and around the Tuscan village of Barga on Your Overseas Home. 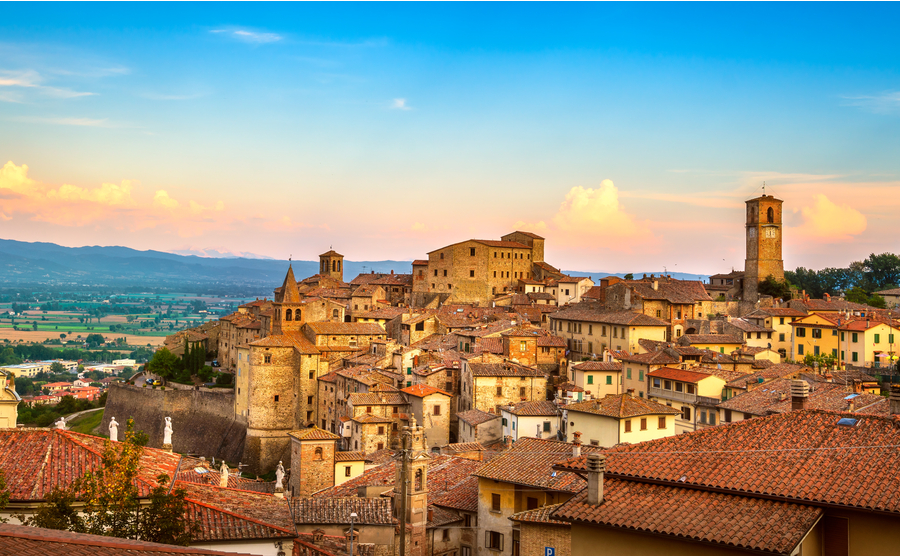 The medieval village of Anghiari, Arezzo in Tuscany

Anghiari, is located in the province of Arezzo. This ancient village of cobbled alleyways and medieval stone houses is known for the famous battle in 1440, between the Florentine and Milanese troops, which was immortalized by Leonardo da Vinci and now calls the Palazzo Vecchio in Florence home.

What to see in Anghiari

Anghiari has a museum in Palazzo della Battaglia dedicated to the battle and it’s definitely worth a visit. Focal points of the village include a clock tower (known as Campano) and the church of Santa Maria delle Grazie. Visitors can take a guided tour of The Praetorian Palace to discover the Roman wine cellar and the ancient dungeons which once housed the Court and prisons.

Traditional events in Anghiari include a crafts fair, Palio della Victoria, a music festival that includes London’s Southbank Sinfonia, an event of theatre and local cuisine which takes place in a little piazza (il Poggiolini) in the town’s ancient centre, a cycling event in October, and a food and wine tasting event. The village has restaurant, shops, bars, a stadium, sports hall and gym.

Property for sale in Anghiari

Village apartments sell for around €170,000 and big countryside houses typically cost over a million. Here are a selection of properties in and around the Tuscan village of Anghiari on Your Overseas Home. 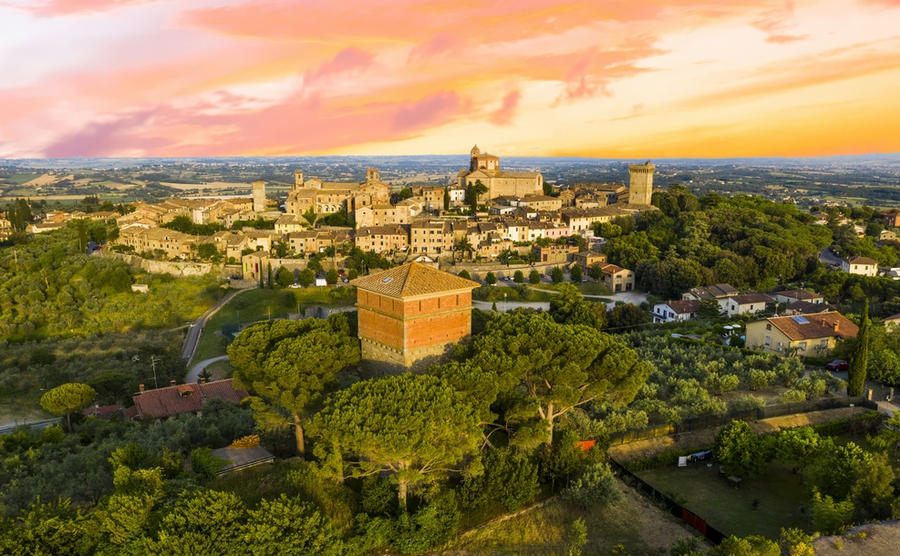 Lucignano is a hill top Tuscan village located between Florence, Arezzo, Siena and Perugia in a beautiful landscape. Known as the “Pearl of the Valdichiano” the medieval village streets are laid out in rings.

Lucignano has received the orange flag of the Italian Touring Club, awarded for “the promotion of cultural heritage, environmental protection, culture, hospitality, access to and availability of resources, the quality of accommodation, catering and local products”.

What to see in Lucignano

The village represents one of the most interesting examples of medieval town planning for its elliptical plan with concentric rings. On a stroll around the medieval streets, you will discover pretty churches and a museum. The highlight of the museum is a golden tree, which legend says brings luck to lovers who exchange promises of love in front of its branches.

The rural traditions of Lucignano are celebrated at the excellent food and folk events that bring the village to life throughout the year. Here you can taste wine, olive oil and Chianina beef, as well as dance to the rhythm of the traditional music during the days of the Maggiolata.

The Maggiolata (May festival) takes place on the last two Sundays of May. Highlights include the Chianina oxen decorated with ribbons and pulling carts through the village, along with marching bands and floats covered in flowers.

The surrounding landscape is dedicated to agriculture, producing excellent quality wine, extra-virgin olive oil, honey, fruit and vegetables. Walking, horse riding and mountain biking are a great way to explore the countryside. There are also other lovely villages to visit nearby, such as Gargonza, Castiglion Fiorentino, Cortona and Marciano.

Property for sale in Lucignano

A small apartment needing some work can cost upwards of €65,000 and terraced houses from €150,000. A detached house of around 200m² in the surrounding countryside will cost you a minimum of €120,000. Here are a selection of properties in and around the Tuscan village of Lucignano on Your Overseas Home. 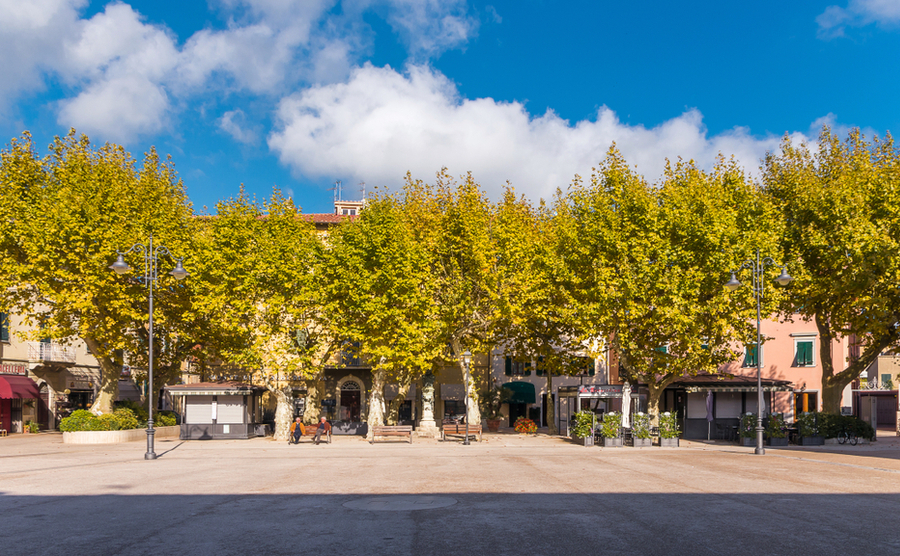 Autumn in Casciana Terme, Tuscany I Muph I Shutterstock

Most famous for it’s thermal baths, Casciana Terme is a place to relax. The spa, of Roman origin, now includes a wellness and massage centre. The thermal springs, whose waters, with their bicarbonate-sulphate-calcium characteristics, flow at a temperature of 35.7 ° and are known for their remarkable therapeutic qualities.

Casciana Terme’s superb location allows you to visit the sea, the hills, the countryside and the city in just 30 minutes. The village is part of the Municipality of Casciana Terme Lari, which incorporates several villages.

What to see around Casciana Terme

The Castello dei Vicari is near Casciana Terme and overlooks the Piscan hills from the top of the Borgo di Lari. Inside the Castle, there is the Museum of the Vicariate, where it is possible to retrace the history of the Castle, the Vicariate and Lari over the centuries. It is also a great location for weddings. If you enjoy hiking, a recommended route is the Terre di Matilda, which takes you to the most beautiful waterfalls.

The area is home to three small theatres which are used for cultural events as well as concerts and theatrical performances. There are several local events and markets, where you can discover traditional crafts and the local cuisine.

The hamlet of Perignano is known as the City of Furniture. Therefore, by visiting its showrooms you should have no problem furnishing your home, while helping to support the local economy.

Around the village of Perignano there are also a network of paths allowing you to discover interesting landscape views and spot other villages. Such as Usigliano, where there is an interesting Museum of Agricultural Activities.

You can find apartments in the area from €35,000, but they’ll need some work. Terraced houses start at around €200,000. For a nice 4 bedroom detached house you can expect to spend over €400,000. There are some stunning villas for around €700,000. Here are a selection of properties in and around the Tuscan villages of Casciana Terme Lari on Your Overseas Home. 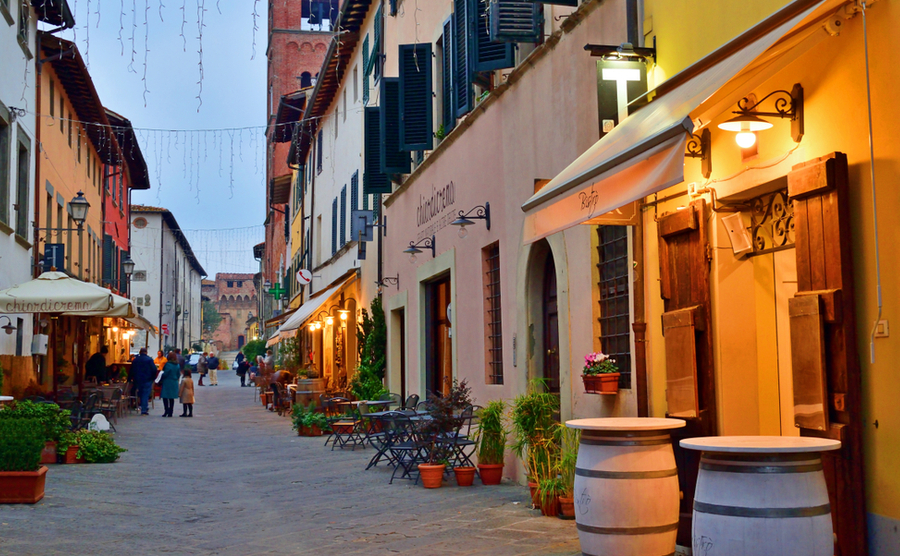 Village of Montecarlo, Lucca I Simona Bottone I Shutterstock

West of Florence towards Lucca, there’s a beautiful area called Valdinievole, famous for floriculture. The Lucchesia hills are nearby, where you see fields of olive groves and vineyards. Sititing on the border between the two areas, on an isolated hill 162 meters above sea level, the medieval village of Montecarlo di Lucca stands.

What to see in Montecarlo

Despite its age, Montecarlo remains a fortress due to its  historical churches and monuments which have stood the test of time. The Rocca del Cerruglio is one of the oldest and best preserved fortresses in the area. Built on the ruins of the Vivinaia Castle it has three semi-circular stone towers, which are still crenelated, and a double brick curtain wall.

Today, an Italian garden, adorns the space between the walls, while the halls and courtyards are often host cultural events and art exhibitions. Three stone doorways still remain: the small Porta a Lucca, the Porta Fiorentina and the Porta Nuova.

The village has six churches. The oldest is Pieve di San Pietro with its Romanesque architecture and decorations. The Collegiate Church of Saint Andrea stands out for the beauty of the frescoes in the dome and for the height of the building.

Strolling the ancient cobblestone alleyways is like an intriguing journey back in time. You’ll see coats of arms, city gates and splendid stone windows.

The village of Monte Carlo even has a small theatre. Since 1639, Teatro dei Rassicurati has been putting on shows, concerts and small amateur performances. Other events in the area include wine festivals, jazz concerts and medieval events.

Montecarlo’s winemaking tradition is well documented in the Wine Museum at the Enoteca Lavagna, where the tools used in the past for harvesting and bottling are exhibited.

Houses ready to move in start at about €250,000. In the country, you can find a farmhouse that needs restoration for about €165,000. A farmhouse of over 250m², that’s fully restored, sells for over €650,000. Here are a selection of properties in and around the Tuscan village of Montecarlo on Your Overseas Home.