Where are the best areas to buy property in Sicily?

You’ll know it’s warm, sunny and historic, but you may not be prepared for how beautiful Sicily is, nor how friendly its people. With baroque palaces and marble palazzos, ancient Greek ruins, a friendly gelateria (or cosy wine bar) on every street corner, Mount Etna quietly puffing away and the Mediterranean shimmering in the distance, no wonder the world has beaten a path to Sicily for over 3,000 years. Come and join us – you won’t be disappointed.  The affordable property prices are a big draw, too.

Why move to Sicily?

For anyone looking out at a grey, drizzly British sky, the hot summers and mild winters of Sicily win every time. The beauty of Sicily is unmistakable, whether that’s the natural parks or its honey-coloured baroque architecture. As a former independent kingdom, Sicily possesses plenty of grand castles, palaces and cathedrals. German literary giant Goethe wrote that ‘to have seen Italy without having seen Sicily is to not have seen Italy at all, for Sicily is the clue to everything.’

The lifestyle is slower and more relaxed than in the UK (and even the rest of Italy). That’s not to say that Sicilians aren’t industrious. Everywhere you’ll see small businesses sprouting up, whether that’s a smallholding offering organic wine, or an old farmbuilding being turned into an agritourismo. Many of us looking for property in Sicily are looking not for a quiet retirement, but a new adventure. One of those was Jim Kerr, lead singer of Simple Minds, who opened a hotel in Taormina. But if you are just looking for peace, quiet and beauty – that’s easy to find in Sicily.

The exception to the peace and quiet is the seismic activity, with beautiful Mount Etna puffing away. Much of the island’s architectural splendour os down to an earthquake in 1693 that led to many towns being redeveloped in baroque style.

It’s impossible to mention Sicily without questions about the Mafia. The general opinion is that the Sicilian Mafia isn’t what it was. They over-reached themselves in the 1980s and 90s and a disgusted local population simply stopped paying the protection money. Long sentences with no chance of release frightened the dons into early retirement or exile. These days incidents rarely affect foreigners. Theft is statistically far more likely in Milan, Bologna and Florence than Sicily.

Buying in Sicily is safe if you use good, reliable professionals. Se can put you in touch with a trusted lawyer for advice about purchasing property.

Find properties for sale in Sicily on our Italy property portal.

Where to buy property in Sicily?

Sicily’s divided into nine main divisions, each with its own character. The average property price per square metre in Sicily is €1,300, but prices vary across provinces. Here’s our breakdown of each Sicilian province and municipality. 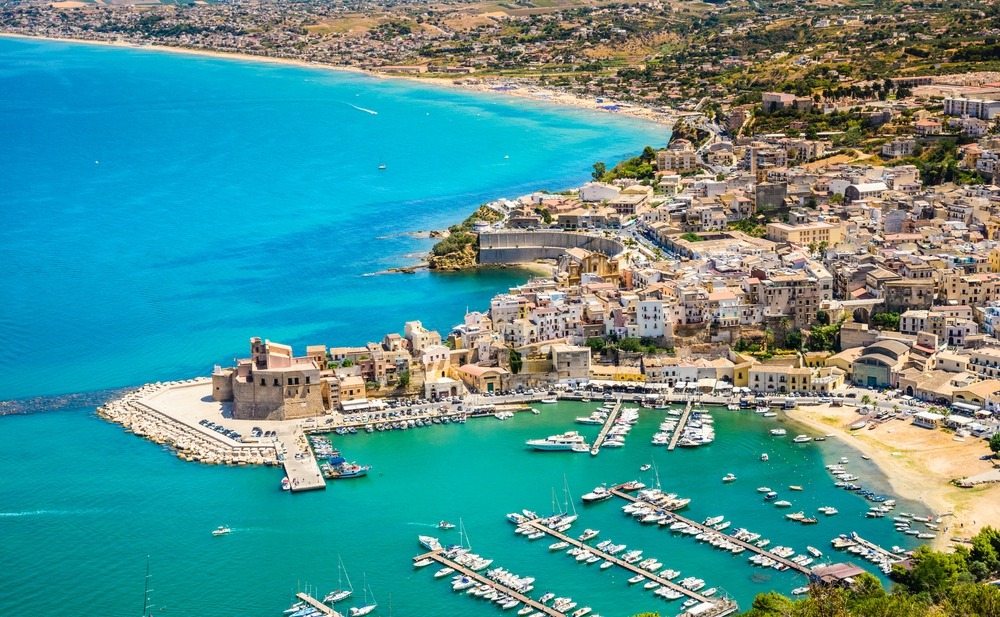 The towns and villages of Trapani are popular locations for expats buying property in Sicily.

Trapani sits on the far west of Sicily. The city itself is a beautiful, ancient town, full of grand old buildings in the local honey-coloured stone. The nearby Zingaro reserve offers breathtaking views to hikers over the sea, while the two coastlines have plenty of beaches if you want to cool off.

This is one of the cheapest coastal regions for property in Sicily, at just €1,000/m2, and that is around 10% down on two years ago. The further south in the province you go, the cheaper it is. In Mazara, for example, you can find houses at well under €5000/m2 inland and from €700/m2 on the coast. 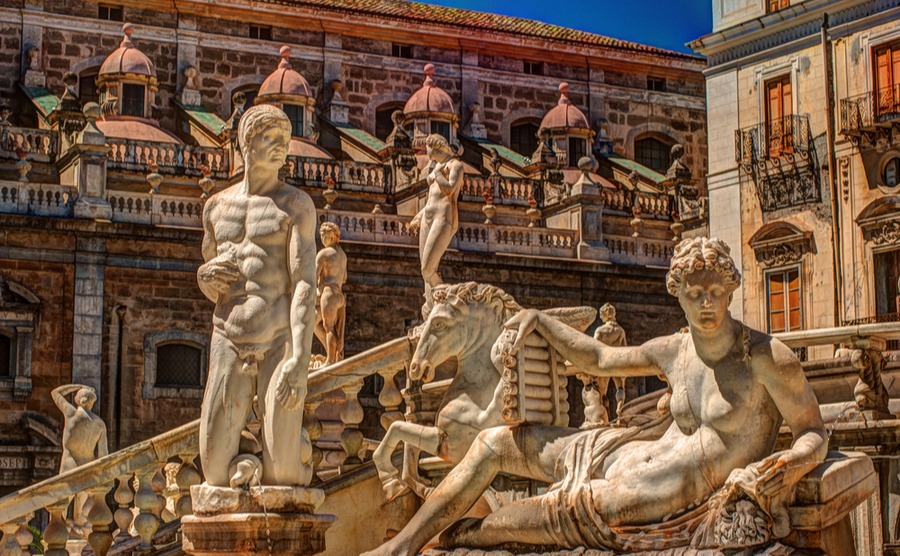 Baroque splendour at the Piazza Pretoria in Palermo

Palermo is undeniably one of the most beautiful cities in southern Italy – and that’s saying something. It was once capital of the Kingdom of Sicily and has been fought over by everyone from the Greeks to the Bourbons to, inevitably, but briefly, the British. The baroque architecture and grand avenues are testimony to its past as a holiday home choice for wealthy Italians throughout the centuries.

The province has a number of popular beaches, especially at Mondello, but the city itself is the real star. Every church, and there are a lot, seems to be competing for beauty. Every back street has smal shops with artists studios and trendy shops.

Outside of the city, take the train east to resorts such as Cefalú. You’ll have to pass a lot of rather dodgy seaside development that’s only ever really busy in the high summer, but there are some real jewels along this stretch of coast too. 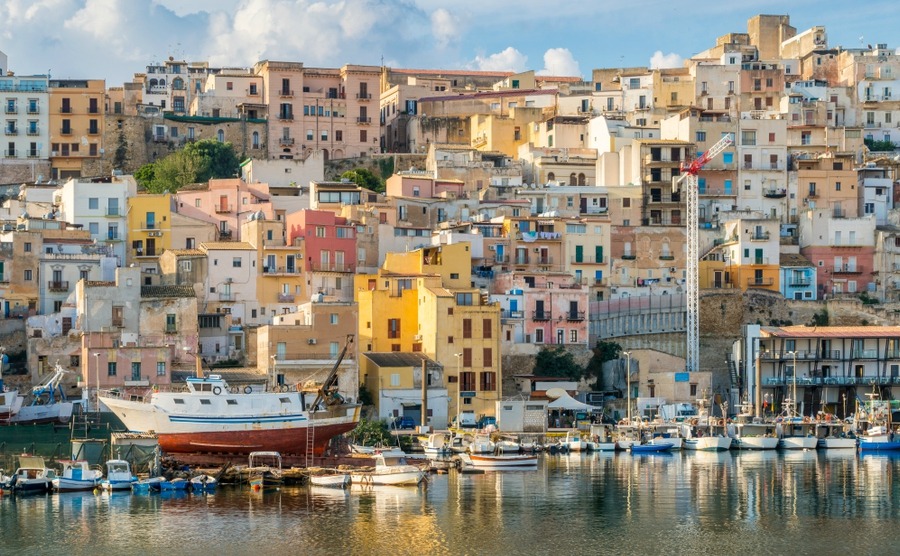 Agrigento’s authentic charm is a big pull for buying property in Sicily.

Agrigento, known as Girgenti in Sicilian, is particularly famous for its beaches. The ones around Torre Salsa, facing the Channel of Sicily, are designated as natural reserves for their environmental significance. The region’s also known for its wine – around ¾ of Fiano vineyards are located here. Property’s quite affordable. As you head towards Menfi in the west, however, prices do become much higher.

Download your free Property Buyer’s Guide to Currency by our trusted partner Smart Currency Exchange to find out how to protect yourself from losing money to exchange rate changes when buying abroad. 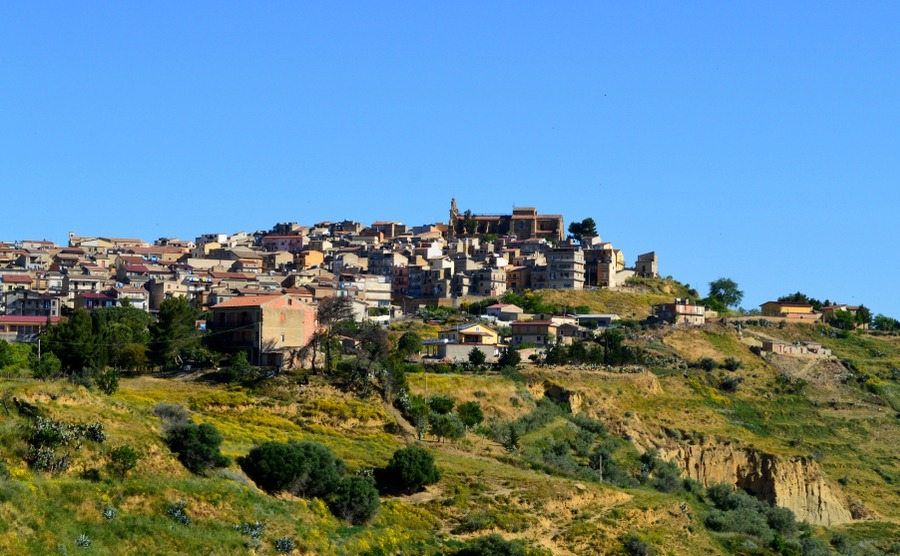 Caltanissetta is ideal if you’re looking for affordable property in inland Sicily.

Don’t forget inland Sicily. Caltaniesstta, in the interior of Sicily, is often overlooked by locals and expats alike. It’s a quiet, rural region, with a cooler climate. Snow in the winter isn’t unusual. If you’re moving for work, there aren’t so many opportunities here. However, if you’re buying a holiday property in Sicily, this could be a fantastic location.

Siracusa, or Syracuse, once one of the great powers of the ancient Mediterranean, is today a medium-sized city of around 125,000 people. The surrounding province is home to the Nyblaean Mountains and lots of golden, sandy beaches. The southernmost areas, especially around Pachino, are relatively expensive. However, towns like Priolo Gargallo, closer to Catania, are much more affordable to buy property in Sicily. 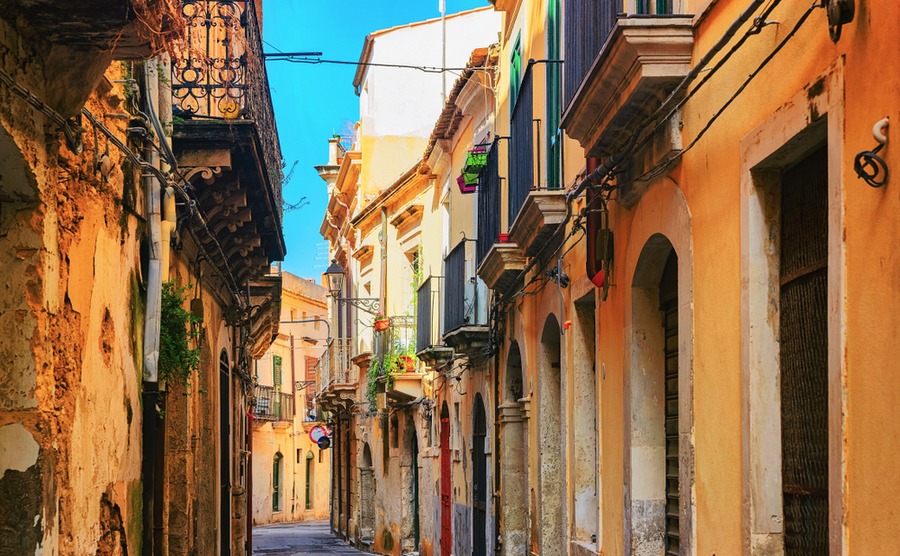 A back street in Ortygia, Siracusa

Within the city of Siracusa is the small island of Ortygia – more well known these days for its perfume. It was the home of Archimedes and has plenty of Greek ruins. IT is best known now, however, for its baroque squares and its cool ambience. There are good universities and it has the trendy cafe culture and nightlife to match. Yet property here is quite affordable. 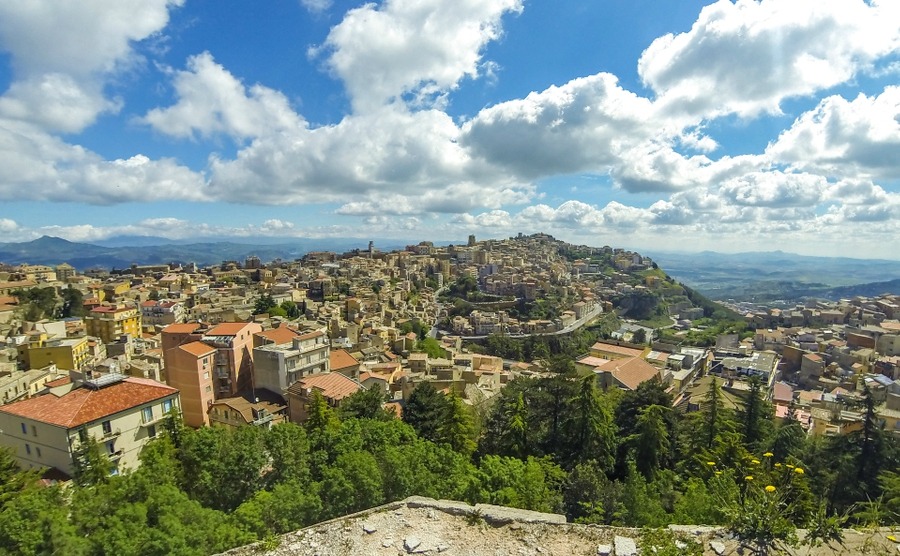 Enna is a popular location for rural property in Sicily.

Enna, also located inland, has Sicily’s highest provincial capital. It’s a region with a lot of history, including one of the best preserved mosaics from Roman times in Piazza Armerina. There’s also Sicily’s largest castle, the Castello di Lombardia. Nature lovers will enjoy Lake Pergusa and the surrounding forest. The wildlife reserve here attracts rare species of birds as they migrate from Europe to Africa. 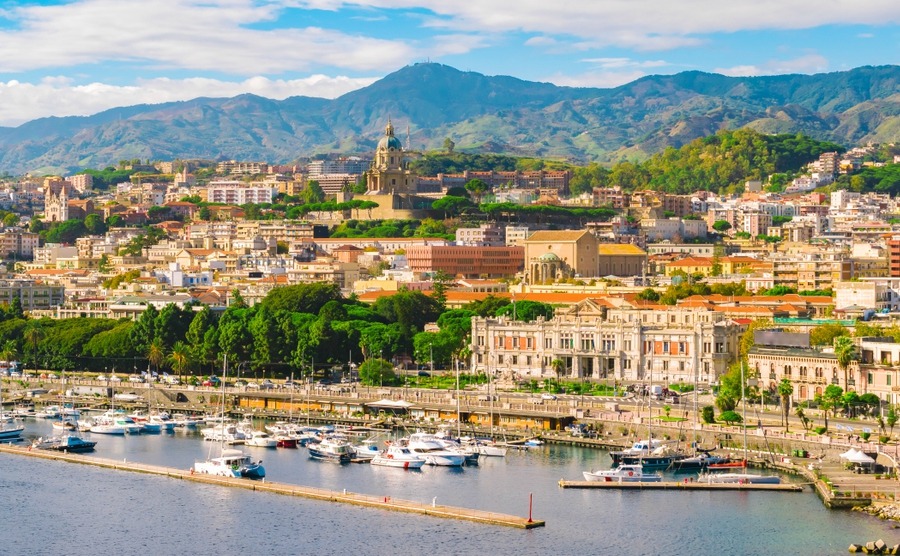 Messina is a stunning region to buy property in Sicily – and its climate is particularly warm and sunny.

This is where Sicily meets – almost! – the mainland of Italy. It’s a fascinating region, with a notable native Greek-speaking minority. The confluence of cultures is evident in the architecture, such as the Church of the Santissima Annunziata dei Catalani’s Byzantine elements.  Anyone buying property in Sicily for the warm climate should look here. It’s particularly warm and sunny, with an average year-round temperature of 18C and almost 2,500 annual hours of sunshine.

This is one of the most expensive parts of Sicily, but you can find lower prices of around €1,280/m2 the closer you get to mainland Italy. Unspoilt towns like Piraino are much pricier, at around €3,680/m2.

Best of all in the minds of many is Taormina. It can get overcrowded with tourists in the centre, but that’s a testament to how utterly beautiful and super-stylish it is! Over the years it has attracted many British and American expats, including famous people such as Noel Coward and Roald Dahl. 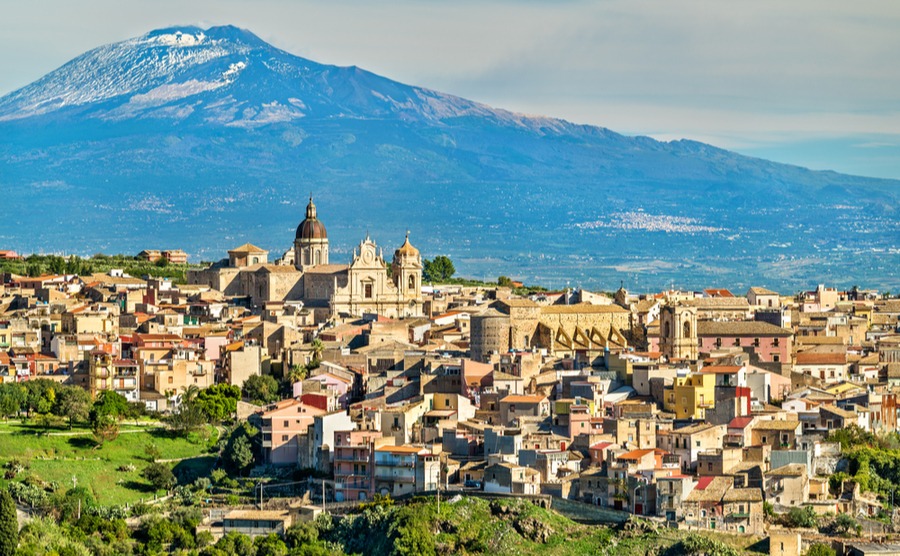 Militello, one of the villages close to Mount Etna

Catania’s one of the most famous parts of Sicily – the city itself’s old quarter is a UNESCO world heritage site. Some of the most well-known Sicilian dishes like pasta alla norma (a vegetarian pasta dish) and arancini (Sicily’s famous rice balls) come from here. One of the most popular areas is Aci Castello, a coastal town overlooked by an imposing Norman castle.

Further inland, prices are lower. Catania also includes much of Mount Etna. Local people love their local volcano, happily living below its 3,000m peak as it puffs and grumbles away. On its sides and foothills are what are reputed to be the best orange and lemon groves in the world. The extremes of temperature high up create Sicily’s beautifully tasting blood oranges. These days Sicily’s citrus trade – at one time one of the world’s most profitable crops and the origins of the Mafia, believe it or not – have given way to viticulture. The wines are now world famous too.

Look out for some of the pretty villages clinging to hilltops, such as Castiglione di Sicilia.

Do you want a holiday home but you’re worried about the cost, workload and whether you’d use it enough? Why not buy with family? Read Buying Abroad with Family for advice on doing it legally, and staying friends! 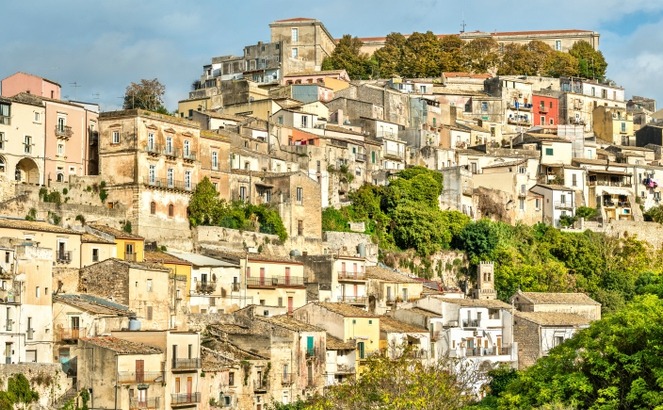 For anyone buying property in Sicily, Ragusa has an excellent combination of laid-back lifestyle and lively towns and villages.

Ragusa – confusingly also the Italian name of Dubrovnik – is part of the Val di Noto, a UNESCO World Heritage Site of seven cities. If you’re thinking of buying property in Sicily, the main attractions here are the beautiful baroque architecture, sandy beaches and delicious seafood. The town of Chiaramonte Gulfi is nicknamed the ‘Balcony of Sicily’ for the panoramic views it offers over the Ipari Valley and out to the sea.