Beautiful Italian villages you can reach by train

There is no shortage of beautiful Italian villages. You can find them in the countryside, by the lakes and on the coast. To help you find the perfect “borgo” for you, here are six that you can reach by car or train.

One of the translations of village in Italian is Borgo (plural: “Borghi”). However, a borgo isn’t quite how you might picture a village. They are usually fortified and can date back to a period between the Middle Ages and the Renaissance. They often have a castle, towers or a noble palace, and are surrounded by defensive walls.

You will hear the word “villaggio”, but it is now mostly used when referring to holiday villages. It can also refer to a small settlement formed around an important resource nearby, such as mines, pastures, crops or fishing. The history, culture and architecture found in Borghi all contribute towards their remarkable atmosphere and beauty. 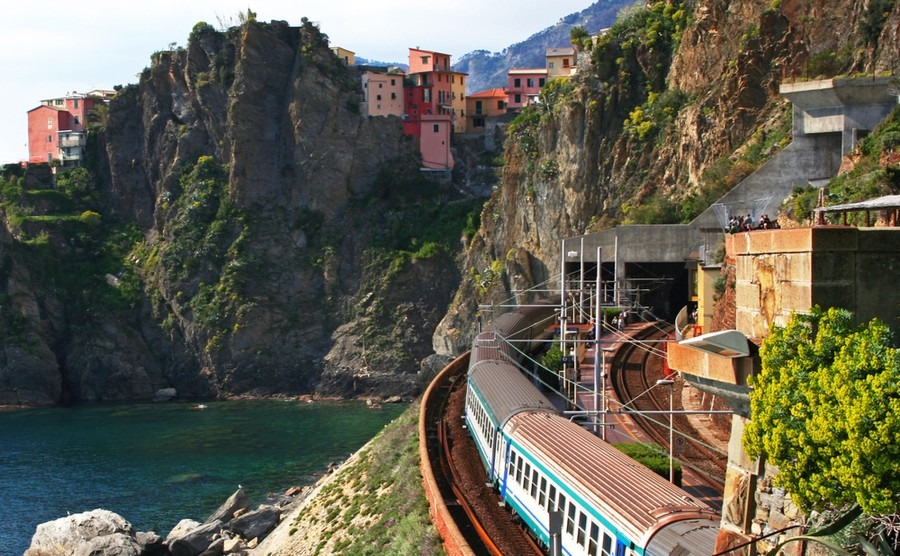 Your arrival in northern Italy

Although you may have to drive a little further from the airport to discover some of the real gems, you’ll find some Borghi are not as remote as you might think. Some have a newer town that sits outside of the walls of the historic Borgo, or at the bottom of the hill. Therefore, you can still benefit from good facilities and transport links.

To promote the great historic, artistic, and cultural heritage of Borghi, the association called “I Borghi più belli d’Italia” was founded in 2001. It now lists 281 Borghi, each of which have made it onto the list due to their beauty.

Make sure you get the best possible mortgage for your Borgo property by talking to your recommended Italian mortgage specialist.

Surrounded by a grassy moat, interspersed with 24 towers, the imposing crenelated walls of Montagnana are an amazing sight. This is a walled village at its very best, and is one of the best preserved in Europe. It conjures up images of ladies and knights and medieval life, and the views from the walls are pretty spectacular too. 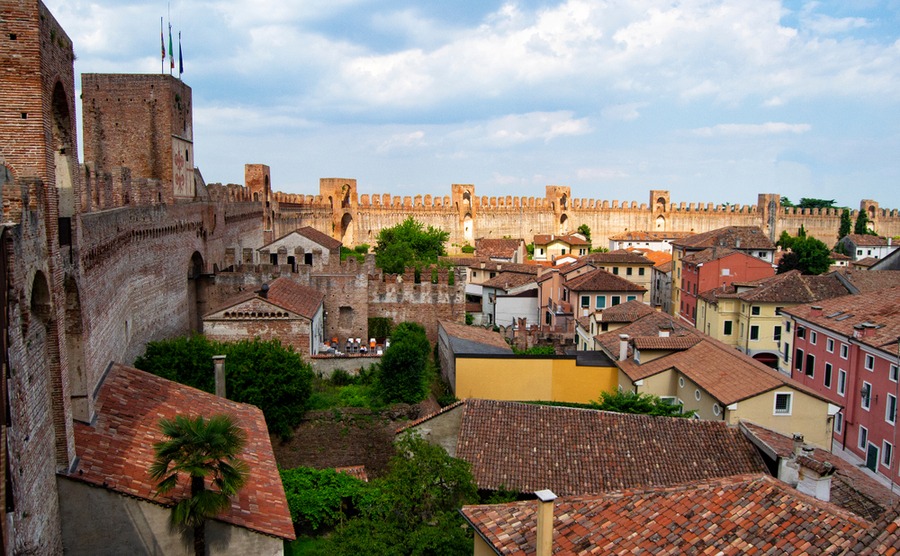 Among its elegant buildings is Villa Pisani, a residence built around 1550 on a project by Palladio. Other Venetian jewels include the eighteenth-century Monte di Pietà and the elegant Palazzo Valeri. The Cathedral dedicated to S. Maria Assunta, boasts an altarpiece by Paolo Veronese. If you want to live here, a five bedroom Palazzo in the historic centre costs around €480,000.

Local events include an antiques and collectibles market on the third Sunday of the month, a spring fair, a Palio and an opera competition. In addition, Montagnana is the leading producer of one of the best dry-cured hams in all of Italy, known as Prosciutto Veneto Berico-Euganeo DOP. It’s best enjoyed during the prosciutto festival held the in spring.

Find properties for sale in Veneto on our property portal.

The municipality of Campo Ligure is located on the northern side of the Ligurian Apennines, in the province of Genoa. The tower of castle Spinola watches over the village, as it has done since the middle ages. It now welcomes visitors to enjoy tours and medieval events. The buildings of this friendly village are painted in pretty pink, yellow and peach, under terracotta roofs. The green window shutters pick out the colour of the forests that create the hilly backdrop to this charming village. 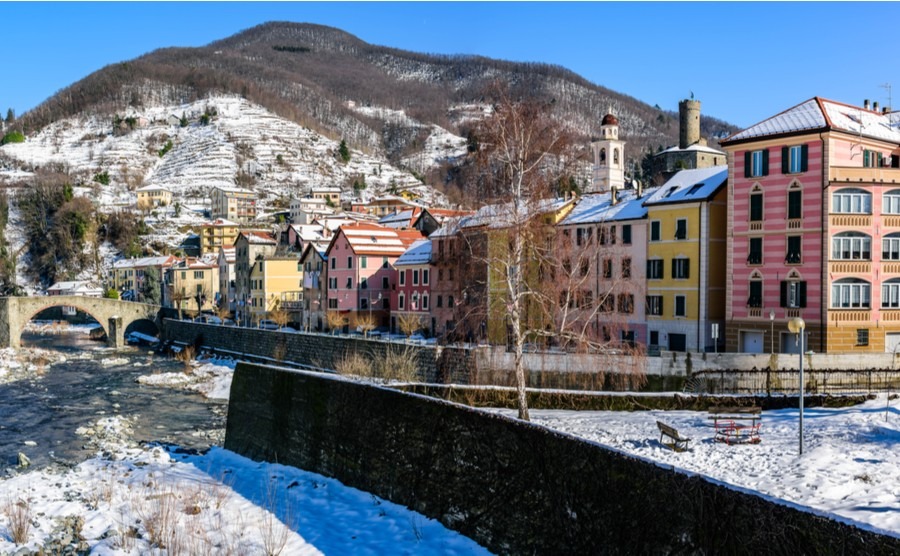 Pretty in pink, Campo Ligure in the snow

In the area you can enjoy many outdoor pursuits such as hiking, mountain biking and horse riding. However, what Campo Ligure is most famous for is the production of filigree, the delicate, lace-like ornamental art of intertwined wire threads of gold or silver. You can marvel at their work in the museum and at the annual exhibition in September.

Train: Genoa – 40 minutes  (It’s possible to travel by trains from London to Genoa via France in about 12 hours.)

FIND homes for sale in Liguria quickly and easily on our property portal.

Italy Property Guides can put you in touch with a trusted lawyer for advice about purchasing property.

Located in the province of Siena, the 14th century walls of the village of Buonconvento have retained their Sienese style. This historic Italian village is protected by a moat and battlements. The name Buonconvento derives from the Latin “bonus conventus”, meaning “happy, fortunate community”. The local landowners were so fortunate that they built many beautiful Palazzi in the village. Some of which are of the Art Nouveau style. A two bedroom apartment in the village costs around €200,000. 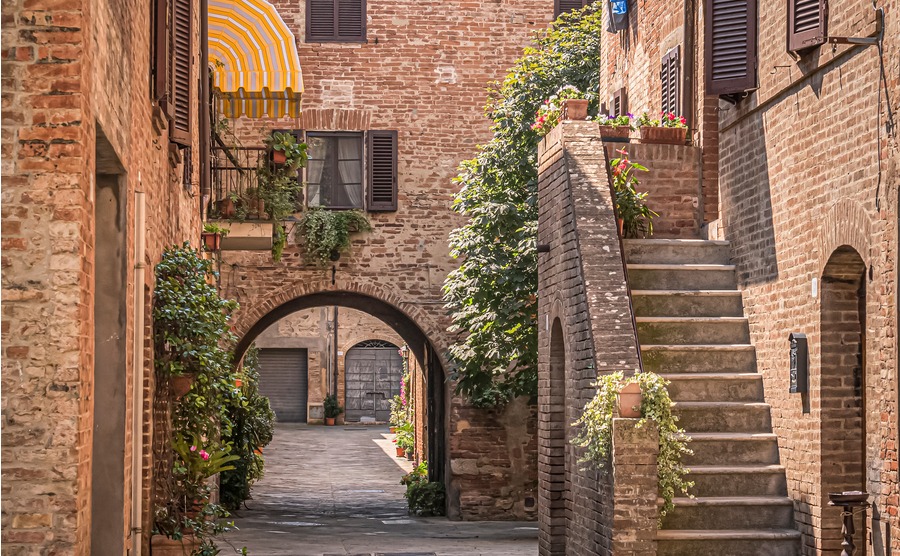 The area around Buonconvento is popular for walking and cycling, and is near the Tuscan section of Via Francigena. This is an ancient road and pilgrim route running from France to Rome and Puglia. Also, in the spring, Buonconvento hosts Nova Eroica, an amateur cycling event, with routes for all ages.

(London to Siena in less than 16 hours, via France)

In Grottammare, the warm tones of the houses combine with enchanting views of the sea. But it is the historic part of the town on the hill that has been listed as one of Italy’s most beautiful Borghi. Buildings of note in the old village include two churches with links to Pope Sixtus V, and the eighteenth-century Teatro dell’Arancio. The sixteenth century tower has been converted into a museum, housing an impressive collection of sculptures. 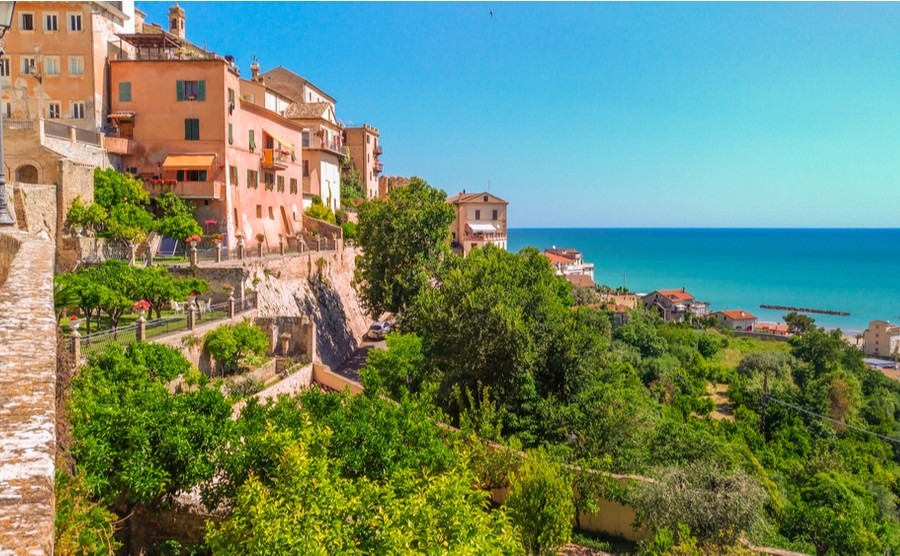 The marina area is also worthy of a mention, with it’s Art Nouveau villas and a promenade lined with palm trees. At the grand villas in the area, famous composer Hanz Liszt enjoyed peace and serenity, among the pine woods and orange groves. If you fancy this lifestyle, an old village house with a view of the sea can cost as little as €180,000.

Grottamare is located along the coast and has developed into a coastal resort with Blue Flag beaches. The beautiful promenade leads to a pedestrian and biking track which winds between the rocks and the sea, leading to yet another unspoiled beach. Due to the citizens involvement in protecting the environment, the town has also been awarded the Spighe Verde prize.

Discover properties for sale in Marche.

Passignano sul Trasimeno is a village located on a steep promontory sloping down to Lake Trasimeno. The old part looks like a small fishing village stretching towards the shores of the lake, and dominated by the fortress above. In fact, the restored fortress houses the museum of boats of the Italian inland waters. From the 22 metre high tower, you can see the whole territory up to Tuscany. 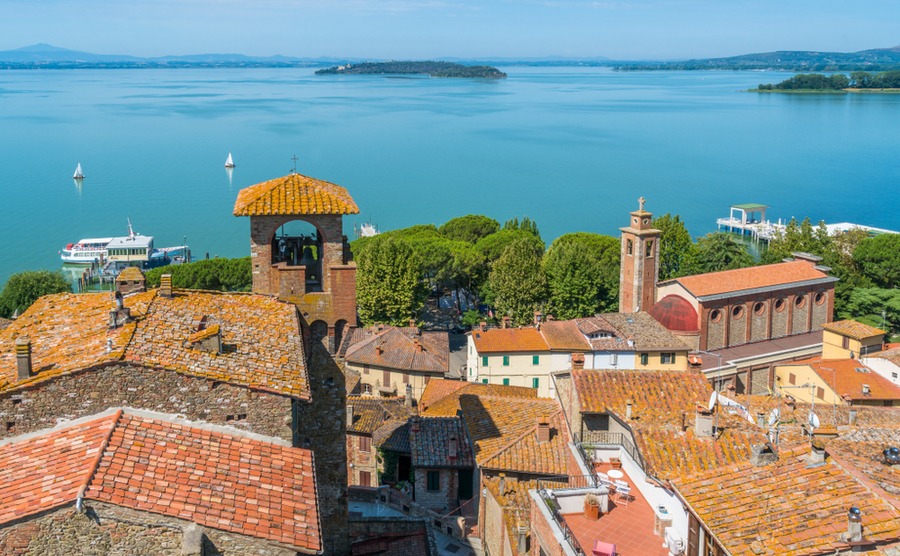 You can find 2 bedroom apartments here costing from €150,000. It’s a perfect starting point for exploring the lake and its treasures, as you can catch a ferry to both of the lake’s islands.

There are a number of events throughout the year including concerts and fireworks on the lake. One not to miss is the Festa della Padella. You will be amazed at the size of their cooking pan; it’s the largest pan in the world measuring 4.5 metres in diameter, and can fry up to 200 kilograms of the best lake fish per hour.

Situated in the province of Perugia, a short distance from Asissi, Spello stretches out across a low hill. The southern part is the “borgo” area, and as you ascend you see hints of its Roman, medieval and Renaissance past. The village is still surrounded by walls erected in 1360, incorporating part of the Roman city walls and three grand gates. Porta Consolare was the main entrance even in Roman times. There are so many historic features to look out for including the Augustan walls, medieval tower, and the tower houses built with pink and white limestone and decorated with red geraniums. 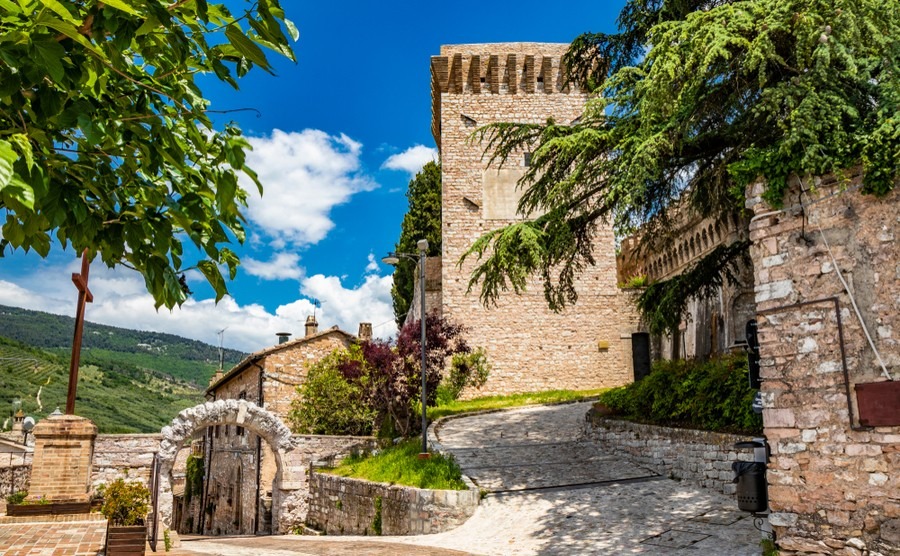 Once a year in June, this quiet village comes alive for the famous L’Infiorata festival. The main streets of Spello are carpeted with floral art, with petals from thousands of different coloured flowers and aromatic herbs are used to create beautiful artwork on the streets. Spello certainly offers a friendly small village atmosphere to feel at home in. You can get a beautiful historic apartment for around €235,000.

FIND stunning homes in Umbria for sale on our property portal.

In Italy, there is an excellent network of trains, with some lovely scenic routes. Italy’s train network is operated by Trenitalia, which was formed by the Italian Government, and ticket prices are very reasonable. For example, a thirty minute journey from Buonconvento to Siena currently costs just €1.80, and a one hour trip from Grottammare to Ancona costs €7.25. You can find times and prices on the Trenitalia website.

Also check out the wonderfully inspiring and informative website, seat61.com, which has up-to-date timetables and tips for travel all over the world.