Outdoor inspiration: winners of “most beautiful gardens in Italy”

If you’re swapping a small and chilly northern European garden for something altogether more bright and vibrant, lucky you! But how will it look? An Italy-wide competition that seeks the ultimate in Italian garden design should offer some inspiration.

Where is the most beautiful garden in Italy? The prize for 2022 was split between the Royal Gardens of Venice and the Gardens of Alassio, in Liguria.

“The most beautiful garden” competition is keenly watched by owners of gardens in Italy. It’s not just about the planting. As well as horticulture, the competition also considers the architecture and heritage of parks and gardens in Italy. By promoting the thousands of parks and gardens affiliated to the “il parco piu bello” network and encouraging people to visit them, the competition aims to raise appreciation of Italy’s green heritage.

The “Italian garden” design is well known and copied around the world. It features flower beds with box-hedging borders, paved or gravel paths, statues, fountains, pergolas and citrus trees in terracotta pots. It all conjures a picture of cool elegance. They have also been influenced by English garden design too. Such as, the English Garden at the Royal Palace of Caserta.

This year two winning gardens have been selected. Both have been restored in recent years, showcasing many of the original trees and plants that were part of the original design in the 1800s. One is a public garden in Venice. The other is the garden of a privately-owned villa in Alassio, Liguria.

The gardens of Alassio

Just under an hour’s drive along the Ligurian coast from Sanremo is the beautiful seaside town of Alassio. It is also just over an hour by train or car to Genoa airport and a little more to Nice airport. The Gardens of Alassio have the most amazing view over the entire Gulf of Alassio and the Gallinara island. You can find them a short walk from the train station at Villa Della Pergola.

Proving that the dream of creating a stunning Italian garden is nothing new, this Anglo-Mediterranean park was created in the late 1870s for the British General William Montagu McMurdo and his wife. They wanted a private villa on the Italian Riviera to use as a winter retreat, and the Ligurian coast offers a sheltered, mild climate.

The first villa they built was called Napier House in honour of McMurdo’s father-in-law, General Sir Charles Napier. Soon after they started work on the bigger Villa Della Pergola. After General McMurdo’s death it was sold to another Englishman Sir Hew Clifford Hamilton-Dalrymple.

By 1900 the Hamilton-Dalrymples has increased the number of ornamental plants significantly. They planted cypress groves, grand eucalyptus, pergola-climbing wisteria and Lady Banks’ roses. By 1908, William Scott’s “The Riviera” guidebook described the gardens as one of the wonders of the Riviera: “The perfect mix of exquisite gardening, true love for nature, and professional design”.

From 1922, the Hanbury family, worked hard to complete the gardens, introducing many exotic plants. They had magnificent specimens of fan palms, dates and cycads. A collection of Cactaceae, Agave and Aloe plants were also shipped in. In the later years, after WW2, Mrs Hanbury held glamorous parties in the spring, during the blossoming of wisterias. Among her guests, novelist Cecil Roberts wrote a book on Alassio, “Portal to Paradise”.

You can read much more in “Italian Botanical Heritage Guide”

The gardens in film and paintings

In 1925, Alfred Hitchcock chose the park and the nearby beach for some scenes of The Pleasure Garden. In 1957, Oscar-winning Guy Green filmed The Snorkel in Villa Della Pergola. In the 1960s and 1970s, the smaller villa was used as a studio by writer and painter Carlo Levi. He even portrayed Alassio in some of his paintings.

The restoration of the gardens of Alassio

In 2006 a group of friends led by Silvia and Antonio Ricci bought the property and started restoring the park under the direction of the landscape architect Paolo Pejrone. They particularly wanted to recover and enrich the renowned botanical collections including that of wisteria, of which there are 34 different varieties in Italy. Also, the agapanthus, the most unique collection in Europe with about 500 varieties. 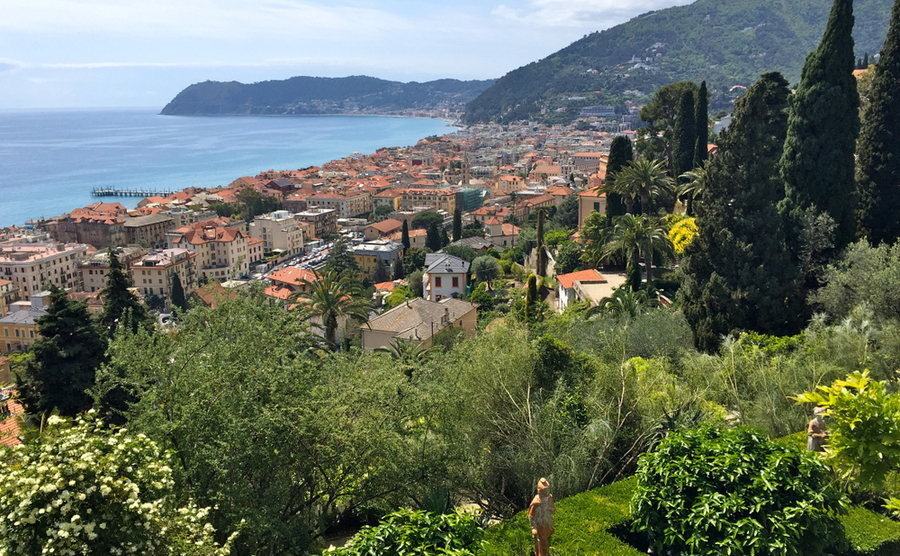 Alassio and the view from Villa della Pergola

The 5.5 acre park is now famous for its wealth of evergreen Mediterranean and tropical vegetation. The garden is created with pines, myrtles, carob trees, olive trees, almond trees, cypresses, cedars, holm oaks and over thirty varieties of citrus trees. If the scent of citrus wasn’t a big enough treat, there are also fragrant pelargoniums and jasmine, as well as the beautiful colours of oleanders, hydrangeas, geraniums, and the seasonal blooms of the tumbergias and Spiraea. There are also hundreds of species of lilies of the Nile, as well as Pink water lilies and blue tropical water lilies.

The gardens are open for guide tours every day (except Monday) from March to October. The tour lasts about 90 minutes and costs €12. You can book on the Giardini di Villa Della Pergola website.

Where are The Royal Gardens of Venice?

The Royal Gardens of Venice are hidden behind the Café Florian building between Piazza San Marco and the entrance of the Grand Canal. The buildings overlooking the park include the Correr Museum, the Imperial Halls of the Royal Palace, the National Archaeological Museum and the Marciana National Library.

The iron entrance gates are on the waterfront walkway looking across towards Chiesa di San Giorgio Maggiore. On the waterfront you will find condolas, souvenir stands and the San Marco landing stage. On the other three sides of the park are narrow canals with a wooden drawbridge.

Restoring the Royal Gardens of Venice

Originally commissioned by Napoleon Bonaparte, these were formal gardens with paving and flower beds. After being neglected for decades, the Royal Gardens were returned to the city in 2019 on the initiative of the “Venice Gardens Foundation”. 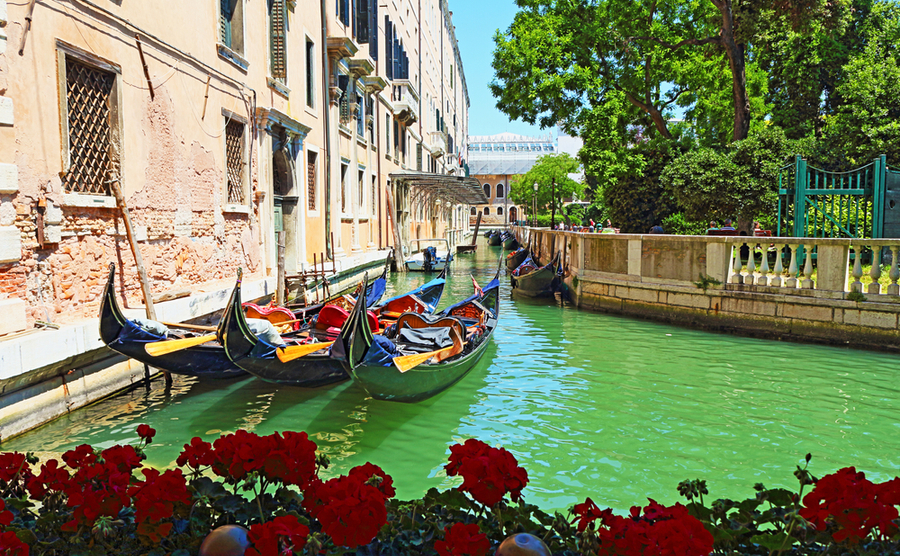 After careful research of the archives, a restoration project began of the buildings and artifacts still on site. This included the restoration of the wrought iron gates, green house, lampposts, pergola and drawbridge. The pergola alone has forty-six decorative columns built from cast iron in the 1850s, all now lovingly restored. While the decorative iron gate, made in 1816, has been brought back to its former glory and is a true work of art.

Another restoration challenge was the Coffee House Pavilion constructed by Lorenzo Santi between 1816 and 1817. Built with white Istrian stone, decorated in the “neoclassical” style, it has a central cupola that had developed a leaky roof. To appreciate the extent of the restoration work visit the Venice Garden Foundation website. If you are planning to live in Venice, becoming a volunteer at the garden is a great way of meeting people and spending time in a beautiful green space.

The Royal gardens of Venice today

Integrated with the existing vegetation are now exotic species that ensure amazing flowers throughout the year. Evergreen hedges protect the garden from the weather and some shade is provided by the old pines, and climbers that have become well established over the pergolas. There are terracotta pots with citrus trees and star jasmine. The central pergola is covered in wisteria and there are flower beds with agapanthus, japonicum and irises. In shadier areas you will see myrtle and hydrangea.

Today entry to the Royal Gardens is free to the public. They are open every day (Except Monday), from 9am – 5pm in winter, and 8.30am – 7pm in summer.

On the “il parco piu bello” website you can select a region and discover a list of gardens and parks to visit. It can be very interesting to see what grows well in each region. Visiting a garden can be a great inspiration for creating your own Italian garden. You can find property for sale in Liguria and Venice in our property search section.