A place with the view of the Italian mountains

When your home has a view of snow-capped mountains, it adds a touch of magic to the winter season. Throughout the year mountain areas provide a great place to get out into the fresh air and be surrounded by nature and stunning scenery.

Which Italian regions have mountains?

Almost 40% of the Italian territory is mountainous, so finding a property with a view of the mountains shouldn’t be too difficult. The Italian Alps stretch across the northern regions of Piedmont, Valle D’Aosta, Lombardy, Trentino alto Adige, Veneto and Friuli-Venezia Giulia, and border France, Switzerland and Austria. This is also where you will find the most famous ski resorts.

However, there are also mountains across Liguria and heading down central Italy, becoming particularly prominent in Abruzzo, Basilicata, Calabria and even across the island of Sicily. This range of mountains is called the Apennines, or Appennini in Italian, and are around 750 miles in length. The highest slopes get winter snow, even as far south as Calabria and Sicily.

Can you ski in the Italian mountains?

Across Italy there are over 290 ski resorts with almost 6,000 km of slopes between them. You can find a map and information about all the resorts on the Ski Resort website . Even if you don’t to ski, it’s hard to resist the charm of a wooden chalet in the snow, straight off a biscuit tin. 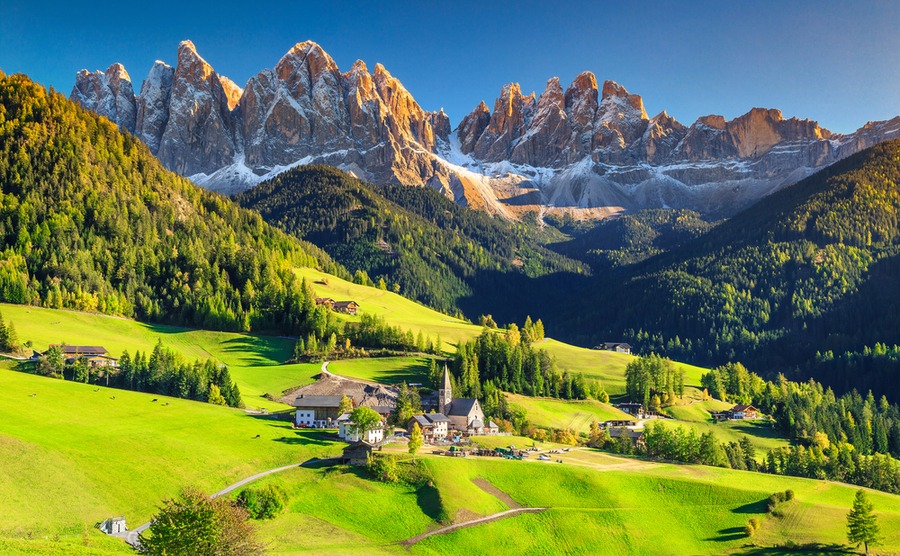 Due to Covid restrictions, aimed at discouraging people from gathering, the 2020-2021 ski season is rather uncertain. However, one thing is for sure, the mountains will still be there, inviting us to stand and gaze, with cold glowing cheeks and wet feet in the snow.

The draw of the mountains

The best part about having a mountain retreat in Italy is the various outdoor activities on offer throughout the year. Skiing, snowboarding, mountain biking, horse riding, ice skating and trekking along the many hiking trails are just a few. In addition, there is the delicious cuisine, Christmas markets and cultural events that are unique to each region.

If you buy a holiday home in a good location you could rent your property to winter sports enthusiasts, as well as walkers in the summer. Italy’s mountains attract so many tourists, the Official “Italia” Tourism website devotes a whole section to Italy’s Peaks and Pinnacles.

In the region of Trentino Alto Adige (South Tyrol), the Dolomite mountain range is a highlight for keen photographers. The most highly rated resort is Gröden (Val Gardena). This region offers many superb ski resorts and pretty villages, with stone and wood chalets. Or if you have 5 million to spend, how about this castle in Trento province, near Lake Garda.

The highest peak in Italy is Mont Blanc, at 4,810 meters (15,780 ft) above sea level. It’s located in the region of Valle d’Aosta , which is is a dream for mountain climbers. There’s not only the  Matterhorn (4,478 m), known in Italy as Monte Cervino, but also, Monte Rosa and Gran Paradiso. Shaped by ancient glaciers the Aosta Valley is a beautiful alpine region with tranquil lakes. Popular ski resorts include Courmayeur and Cervinia, and countryside dotted with medieval castles and fortresses.

In Piedmont you can find large farmhouses for sale. But, if you venture into the mountains, you’ll also discover small stone properties in charming hamlets at very low prices. The ski resort of Via Lattea (Milky Way) hosted the Olympic Winter Games of Turin in 2006, yet you can still find cheap holiday bedsits right near the slopes.

The Lombardy region is easy to reach due to numerous flights to Milan. To the north of the city there are 35 ski resorts, with Livigno being the most highly recommended. The region has a diverse landscape and boasts the beautiful scenery of Lake Como and Lake Garda. This two bedroom apartment near Lake Como and the mountains is only €68,000.

The mountains of the Apennines are not as high as the Alps; the highest ski resorts have an altitude of 2,360 metres and the highest peak is Corno Grande (Big Horn) at 2,912 metres above sea level.  There are some lovely skiing areas though, such as Roccaraso, Campo Felice, and Rivisondoli. Ski passes are much cheaper than in the alps and property prices considerably cheaper. 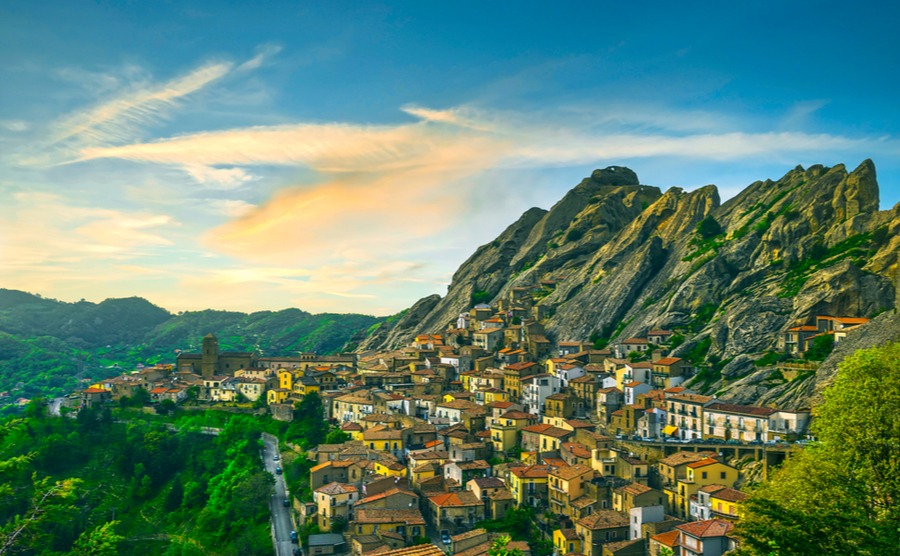 Pietrapertosa village in the Apennines

The popular ski resorts of Alto Sangro (Roccaraso/Rivisondoli) in Abruzzo offer up to 91 kilometres of slopes. There are many other ski resorts to enjoy in this region, which can be reached from Rome in less than two hours. Abruzzo’s natural beauty and friendly locals make it a lovely place to be all year round. This 3 bedroom detached villa has uninterrupted views of the Maiella mountains in Abruzzo, and is priced at €235,000.

The Parco Nazionale d’Abruzzo was established in 1923 to protect nature and to save certain wild animals from extinction. It’s in the heart of the central Apennines between the Abruzzi, Lazio and Molise and its some 50,000 hectares are home to 25 towns. Species such as the Marsican brown bear, golden eagle, Apennine wolf, deer, otter and chamois have found refuge among the remote valleys and inaccessible mountains of the park.

Basilicata is in the arch of the Italian boot, nestled between Calabria and Puglia. The mountains are covered in woodland and forests with charming villages perched on hill tops. It is home to two National Parks and three regional parks and has a varied landscape. Families love to come here to walk, pick mushrooms and tour the country roads. This quiet region has only been getting attention in recent years, due to its extremely photogenic town of Matera. We are still excitedly waiting to see it’s starring role in the new James Bond film.

Heading further south, you can even find a handful of ski slopes in Calabria. You could easily spend the morning by the sea and the afternoon on the slopes. The three main resorts are inland of Codenza, and are called Camigliatello Silano, Lorica and Villaggio Palumbo.

I’ve always found it amazing that not only can you ski in sunny Sicily, but you can ski on the Mount Etna Volcano. Despite being an active Volcano, more than 25% of Sicily’s population live on Etna’s slopes, and it is the main source of income for the island, both from agriculture (due to its rich volcanic soil) and tourism. 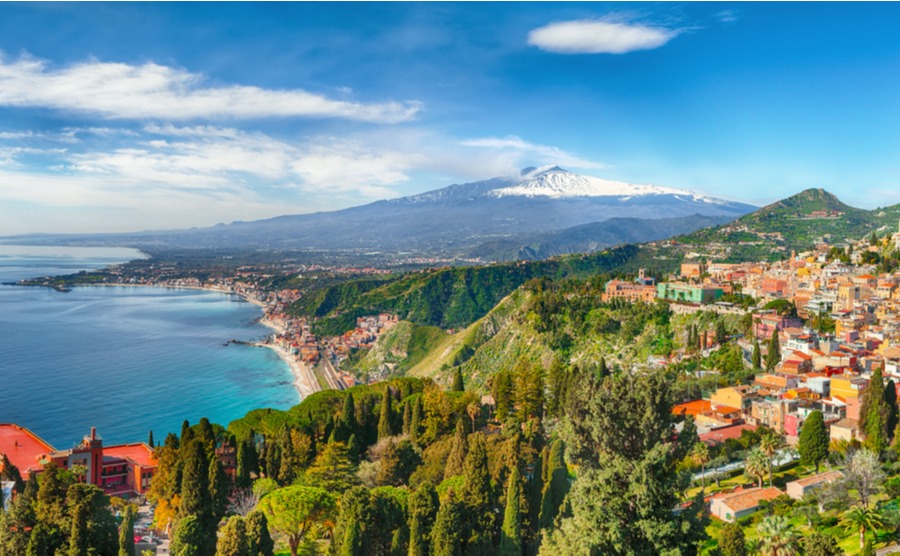 The gorgeous city of Taormina, with Mount Etna behind

The 11th December is the United Nation’s International Mountain Day. Everyone is called upon to celebrate their rich biodiversity, but also to think about the threats they face. Climate change, natural disasters, unsustainable farming practices, logging, littering, and poaching can all take their toll. The migration of people from mountain villages can also lead to the abandonment of cultural practices and ancient traditions that have sustained biodiversity for generations. We can all play our part to protect them.

For many property buyers the dream location is a house on a hill, with a view of the mountains. Imagine being able to go walking in the hills and mountains, visit hill top villages, and also be within driving distance of the sea or a lake. Italy has so many options to enjoy the great outdoors and the mountain scenery is just breathtaking.