Abruzzo is one of the most popular searches on our property listings, and you can see why. Abruzzo has a winning combination of seaside and mountains, easily accessible all year and beautifully affordable. Tempted? Here is where you should start looking….

As the regional airport is located at Pescara, this is a great place to start your search for a property in Abruzzo. The surrounding area has stunning scenery and beautiful hilltop villages with homes for sale at amazingly low prices. We have found 5 lovely villages all within 45 minutes’ drive of the airport.

If you’re ready to see some Italian homes, get your free Italian Viewing Trip Guide today.

Pescara is a modern city bordering the Adriatic Sea. Its long seafront has numerous bathing areas and restaurants and a long cycle path. Pescara is popular all year round, not only for the sea and the shopping, but also for interesting archaeological finds discovered in the area, including a Neolithic village under the Orlando Hill, dating back approximately 6,000 years.

This modern city has become known as “the city of the two bridges”, the Sea Bridge and the Flaiano Bridge, both renowned for their original skyline. The Sea Bridge has become a true symbol of the city: with a length of 466 metres, it is the largest cycle-pedestrian bridge in Italy.

When you can’t find a particular shop in the village, Pescara is where you’ll come, so it’s useful to be within driving distance of Pescara and its airport. There are many charming villages to discover, but here are five that are located within forty-five minutes’ drive of the airport, and currently have some bargain properties for sale. 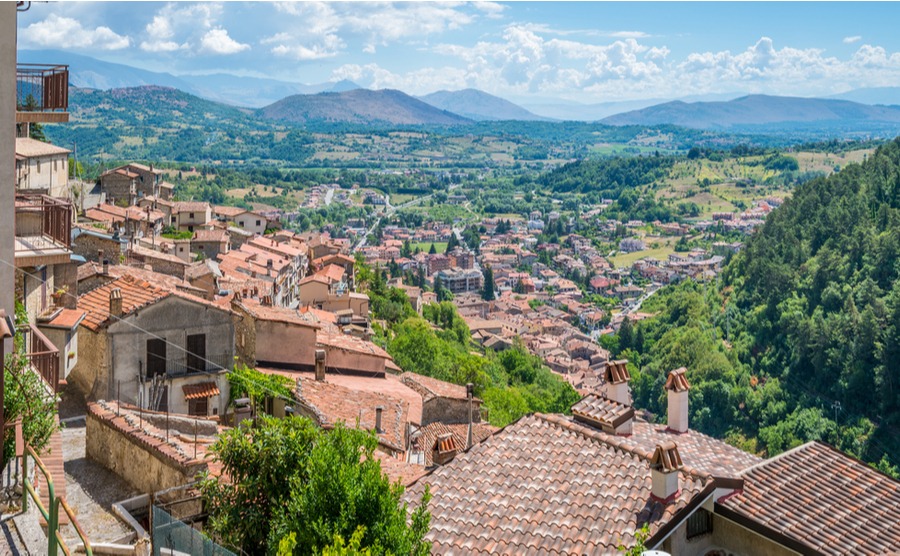 Typically Abruzzo, the village of Tagliacozzo

Less than 15 minutes’ drive from the Adriatic coast and the city of Pescara, you’ll find the charming hill top village of Spoltore. Boasting panoramic views across the Pescara valley, it’s a great place to own a town house.

This lively village has shops, banks, restaurants and cafes, with charming cultural events organised for the 18,000 local residents. It is one of the most beautiful medieval villages in central Italy with architectural features also from the 15th and 16th centuries. The historic centre – with its Renaissance windows, crenellated towers, and baroque balconies – is an inviting location for artists.

A characteristic of the oldest neighbourhood is the “rue acquarie”, narrow lanes along which rain water flows. A must-see building is the ancient convent of San Panfilo fuori le Mura. At the highest point of the village, you can enjoy breath-taking views of the Pescara valley, Chieti, Il Gran Sasso and Majella, and you could buy your own home with a view.

Find homes in Spoltore on our property portal.

This three-bedroom town house with countryside views costs just €160,000. Or this beautifully decorated two-bedroom apartment close to the main piazza is priced at €215,000

Getting to Spoltore: 15 minutes’; drive from Pescara Airport

Citta Sant Angelo is a very sought after location, due to its wonderful views and proximity to the sea. The town has even been named as one of the Borghi piu belli Italia, one of the “most beautiful medieval villages of Italy”. It is on a hilltop, surrounded by vineyards and olive groves, and has incredible views over the plains of Pescara to both the Gran Sasso mountains and the Adriatic coast.

Every Wednesday there is great little market, selling local produce

In the narrow streets you will see beautiful buildings, ancient churches, terracotta rooftops and panoramic views. The town has many restaurants and bars serving various traditional dishes. Every Wednesday there is great little market, selling local produce and the towns amenities include a post office and pharmacy. The churches have a baroque style with beautiful frescoes and there are a number of elegant palazzo houses, including the Baronial Palace. Over 14,000 people live in the village, but less than a thousand reside in the historic centre.

An apartment costs from around €145,000, and outside the village, just two kilometres from Citta Sant Angelo is a three-bedroom house for €210,000.

However, we loved this two-bedroom farmhouse with panoramic views costs just €185,000: 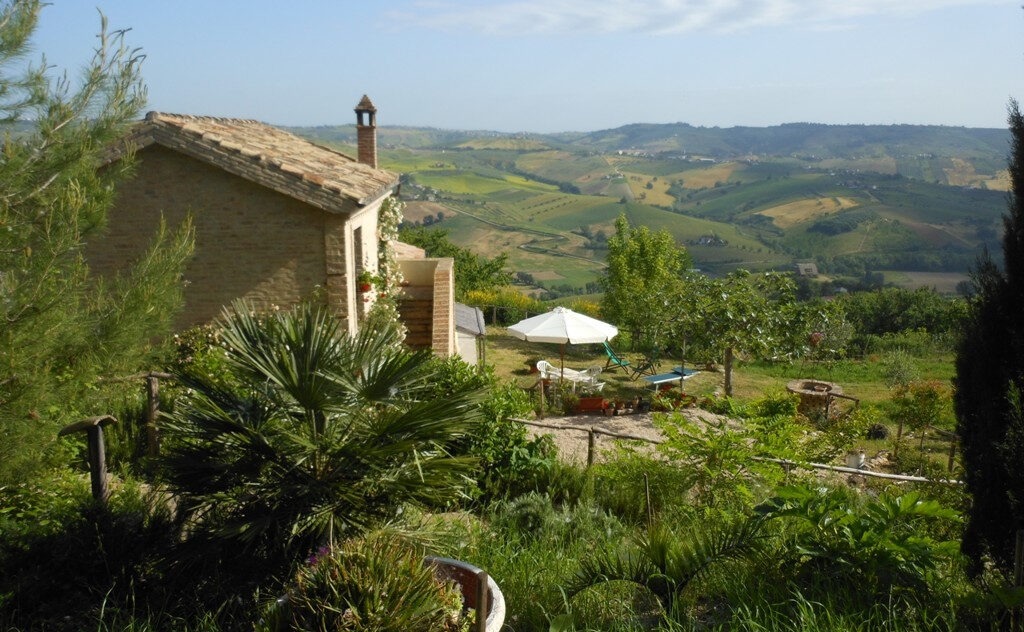 Loreto Aprutino is a quiet village that is just waiting to be discovered. Nestled between the Pescara coast and the Gran Sasso, it looks over a sea of olive groves. The historic centre has many narrow streets to explore, with stately buildings that surround Castle Chiola.

During the fifteenth century the castle was the scene of a war between the Angevins and the Aragonese and it was also bombarded in the Second World War. Since then, it has been transformed into a stunning hotel and events venue. Other architectural highlights of the village include the loggia on the Abbey of San Pietro Apostolo and the portal of the Church of San Francesco d’Assisi. As Loreto Aprutino is known as the “City of Oil” there is an oil museum as well as a ceramics museum.

Close by is the Gran Sasso National Park which is perfect for nature lovers, trekkers, mountain climbers and skiers.

There are excellent restaurants and bars and you’ll find all the amenities you need, such as banks, shops and pharmacies. There is a weekly market every Thursday, so you’ll be able to create amazing meals at home using fresh local produce. Close by is the Gran Sasso National Park which is perfect for nature lovers, trekkers, mountain climbers and skiers. 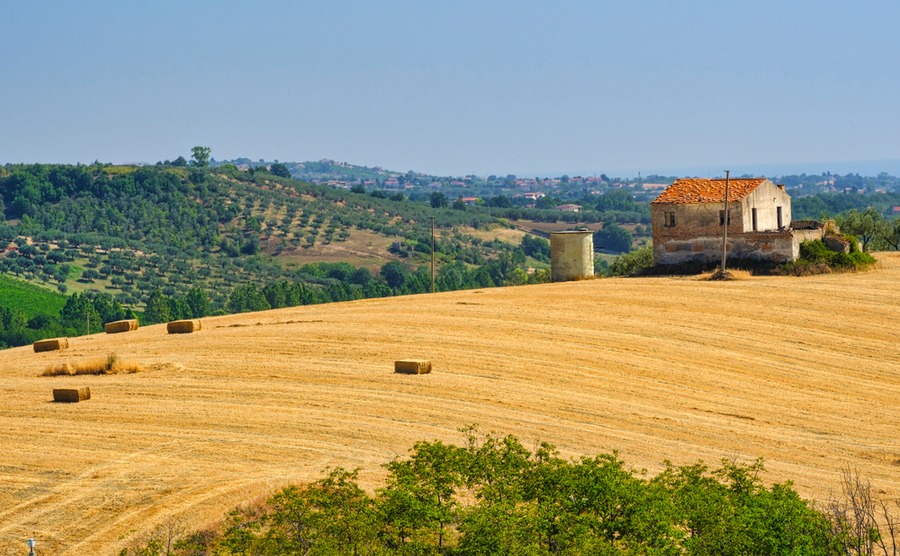 The wheat’s been cut on this hillside near Loreto Aprutino

This apartment in the town of Loreto Aprutino is for sale €55,000. Or if you are looking for a big farmhouse with 150,000 square metres of land including olive groves and vineyards take a look at this one for €825,000 between Penne and Loreto Aprutino.

Getting to Loreto Aprutino: Drive time from Pescara airport 32 minutes.

Midway between the Adriatic sea and the Gran Sasso, the village of Penne stretches over four hills between the valleys of the rivers Tavo and Fino. The use of warm sandy coloured brick in the buildings, has given Penne the nick name “The City of the brick”. Looking at the grand arch at the entrance of the town, you will see the most beautiful use of brick you’ll ever see.

How will British people live in Italy after the transition period ends? Discover in our Guide to Italy After Brexit.

Penne has a close connection with St. Francis of Assisi, as demonstrated by a monument at the gateway, where the first Franciscan church of Abruzzo was built. In the centre of the town, a plaque also commemorates his passage through the streets, in September 1216.

Penne has shops, banks, restaurants, cafes and bars as well as renaissance palaces and churches that illustrate the different eras of the town’s history. Another way to spend a morning in Penne is in one of its museums. You can choose from the natural history museum, the archaeological museum, the diocesan museum, or the modern art museum.

Having a population of just 13,000, there is a nice community feel to the place, which can be particularly seen during the popular festivals in mid-August. These include the Palio de Sei Rioni which involves races and streets lined with food and crafts, and a culinary festival called Pecora Nait.

This three-bedroom townhouse in Penne with beautiful views across the roof tops to the countryside is priced at €115,000. 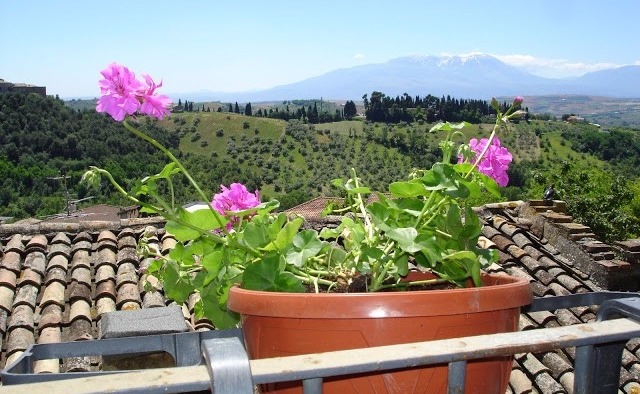 Three bedrooms with a view, of Abruzzo

Getting to Penne: Drive time from Pescara airport 42 minutes.

This village, at an altitude of 370 metres, has 3,000 residents. The reason its such a buzzing Abruzzo village is because of its location in the Majella National Park. You can enjoy the countryside all year round, with potholing and skiing in winter (at the ski resort of Passolanciano) and the usual country walks, rock climbing and other energetic pursuits in spring and summer. Beware of the bears though!

Lettomanoppello is known as the “The village of stonemasons”. The white stone is quarried locally and you can see the stonemasons’ artistic works all around the village.

Lettomanoppello is in an area with caves full of stalactites and stalagmites, such as, the Grotta delle Praie, considered the largest speleological cave in the province of Pescara , and the Grotta di Sant’Angelo , which was the place of worship of the ancient Italic people. Of geological interest are also the sulphurous springs called Lavino and Ripa and the waterfall at Cusano.

Despite the small population there are shops in the village of Lettomanoppello, including a pharmacy, bank, post office and general store and at the heart of the town is the church of San Nicola di Bari. The village also has a bakery, bars, a pizzeria and restaurants selling typical culinary delights of the region. There’s even a weekly market selling local produce. 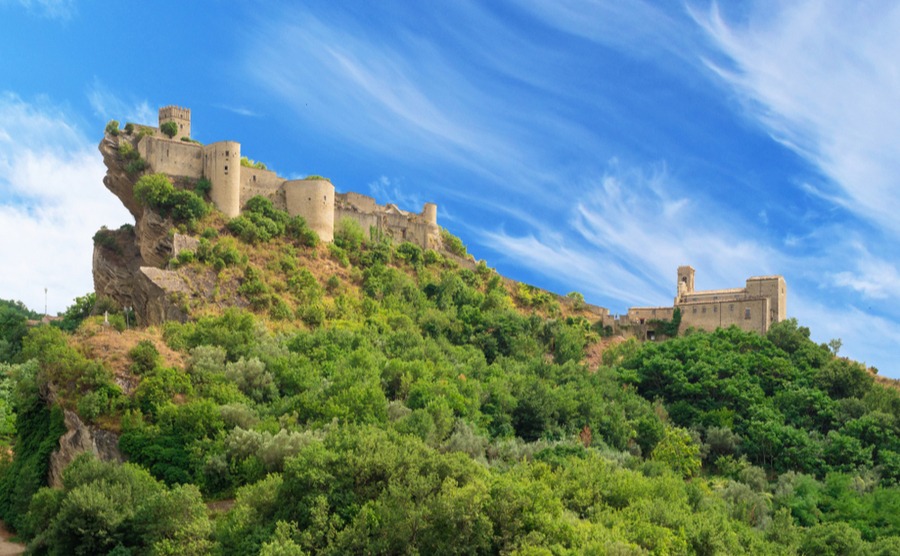 Getting to Lettomanoppello: Drive time from Pescara airport 32 minutes.