12 great reasons to buy near Milan

Whether you choose to live by the nearby lakes, countryside or right in the city, Milan is a wonderful place to visit. Highlights include the shopping, sightseeing and nightlife, but let’s delve deeper into what the city has to offer. Here are 12 great reasons to visit Milan.

One of the most stunning sights in Milan is the Cathedral of Santa Maria Nascente. Known as “Il Duomo”, it is the largest cathedral in the world with the largest stained-glass windows and a beautiful facade. To one side of the Piazza del Duomo is Italy’s oldest shopping arcade, with a metal and glass dome soaring 48 meters above its mosaic floor. 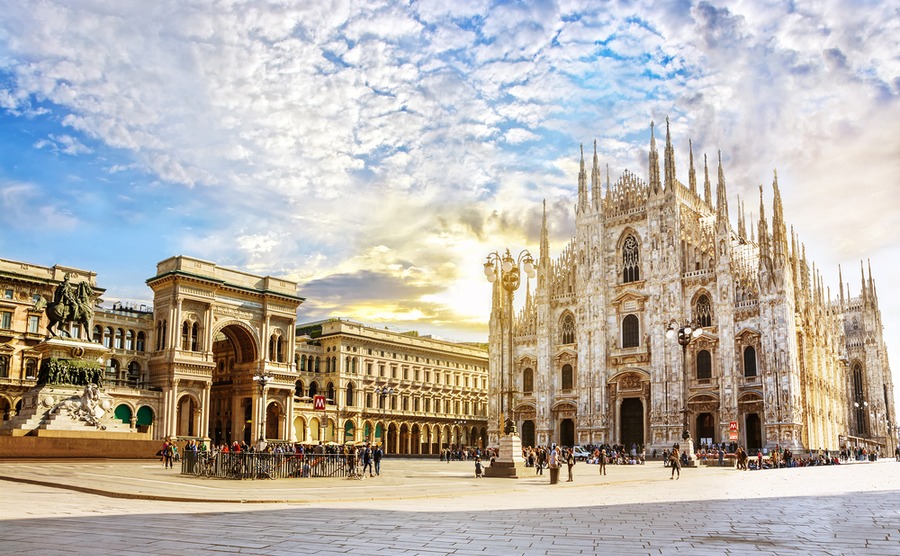 One of the most stunning sights in Milan is the Cathedral of Santa Maria Nascente, known as “Il Duomo”

For music lovers Piazza della Scala is the place to go, where you’ll find one of the most important opera houses in the world: Teatro La Scala.

Attractive neighbourhoods include Brera which has interesting shops, antique dealers, bars, artworks and restaurants. Navigli is also characterized by its art and artisan workshops, as well as its charming canals. There is so much going on in this vibrant city, discover more on the YesMilan website.

Milan is world famous for its fashion brands. Not only on the catwalks of Milan Fashion week, but also on the streets of city.

Milan is home to some of the most famous luxury fashion brands in the world – Giorgio Armani, Dolce & Gabbana, Prada, Versace, Attico and Missoni to name just a few. Start your shoppIng adventure with the top brands in Via Monte Napoleone and the high-end boutiques of Via Della Spiga.

Top design can also be found in the homes of Milan. The city boasts some renowned interior designers, furniture stores and workshops. Each year, Milan hosts a magnificent Furniture Fair (Salone Internazionale del Mobile di Milano) which is the largest trade fair of its kind in the world. The exhibition showcases the latest in furniture and design. 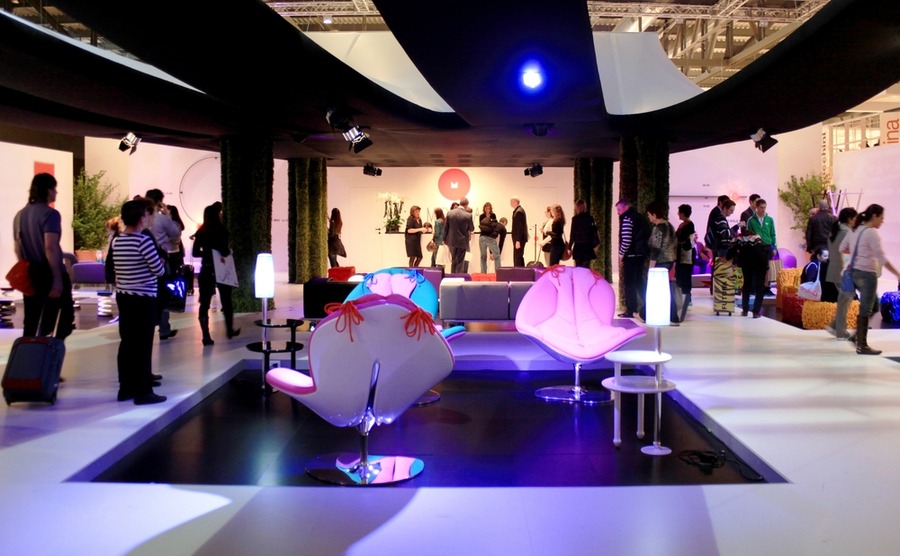 Each year, Milan hosts a magnificent Furniture Fair (Salone Internazionale del Mobile di Milano) which is the largest trade fair of its kind in the world – Adriano Castelli / Shutterstock.com

Milan is the capital of finance in Italy and is home to the Italian stock exchange. There are many Italian and foreign banks with branches in the city along with ICT multinationals.

Milan’s innovative business district offers opportunities for talented professionals to connect with businesses around the world. The city prides itself on being able to adapt to the continuous social and technological changes, and to create an exciting place to live and work.

Italy is also the second largest manufacturer of medical products, after Germany. Engineering companies employ thousands of people in the industrial districts and there are 12,000 companies in Milan involved in the fashion industry.

Milan’s three international airports – Malpensa International Airport, Linate Airport and Bergamo Orio Al Serio Airport – bring tourists and business people from all the major cities around the world. You can also take internal flights to other airports around Italy, making it easy to explore the regions or live in smaller cities and visit Milan. 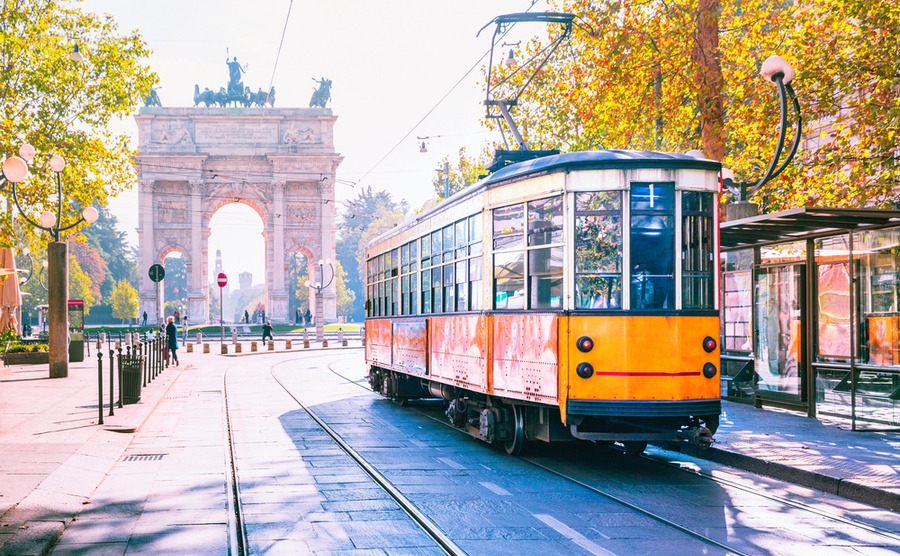 The city’s public transportation is well-organized, with a combination of metro, trams, buses and suburban trains that bring commuters from outlying districts.

The city’s public transportation is well-organized, with a combination of metro, trams, buses and suburban trains that bring commuters from outlying districts. The excellent road and rail links make it easy to visit other top Italian destinations too. The banks of Lake Como, Garda or Maggiore are within driving distance, and it’s possible to visit the beautiful coastline of Liguria or go skiing in the Alps.

According to Numbeo the cost of living in Milan, including rent, is over 23% cheaper than London. It is also cheaper than New York and Sydney.

If you buy an apartment in the city centre you could be paying 42% less than in London – central Milan apartments costs around €7,710 per square metre. Internet charges can be as much as 24% cheaper than London and eating and drinking out in the city is also very well priced.

Make sure you get the best possible mortgage for your property by talking to your recommended Italian mortgage specialist.

As well as hundreds of private and public schools teaching in Italian, there are several international schools offering a full curriculum taught in English. There are also a number of international kindergartens for children of preschool age.

Older students have the choice of 11 university-level institutions and seven art academies. Among the most well-known are Milan State University, the Milan Polytechnic, the Catholic University, Bocconi University and the Brera Academy. Nearly 100 university degree courses are taught in English.

Milan has a network of 30 public and private hospitals offering state-of-the-art healthcare. Twelve of the hospital even have emergency rooms offering dedicated assistance for foreign patients. There are also medical centres dedicated to the large expat community living in the city, such as the American International Medical Centre and the International Health Centre.

In order to keep fit and healthy there are plenty of health clubs and beauty centres where you can unwind.

Milan is the perfect location to try excellent Italian cuisine. There are over 17,000 restaurants, seventeen of which are Michelin-starred.

Italians demand quality local food, and eating well is a big part of their day. The Milan area also ranks highly in the production of traditional food and drink products with quality certifications demonstrating their local origin. Make sure to try the Rissoto alla Milanese or Cotoletta alla Milanese. 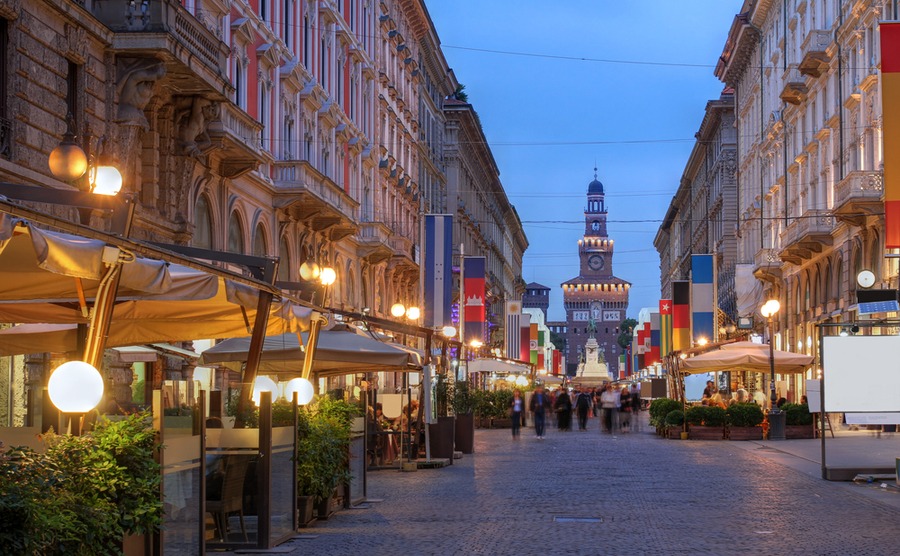 Sunset on Via Dante, one of the major pedestrian avenues in Milan – Mihai-Bogdan Lazar _ Shutterstock.com

Milan offers a wide choice of housing, both in the historical centre and in other central locations such as CityLife, Porta Nuova, Garibaldi and Darsena, which have parts that are both commercial and residential.

As with other major cities rental prices can be high, reaching up to €25 per square metre in the city centre. Depending on location, condition and furnishings, a one-bedroom apartment can cost between €600 and €1,400 per month plus bills.

You can buy ultra-modern penthouses as well as sophisticated apartments in beautiful historic palazzos. There are spacious apartments for sale with price tags that compare well with London rates. Two-bedroom apartments can be found for less than €450,000. However, less expensive accommodation can be found in the suburbs, which can be reached easily on public transport.

Milan and Cortina d’Ampezzo have been chosen jointly to host the 2026 Winter Olympics (6th to 22nd February, and 6th to 15th March for the Winter Paralympics). The Winter Olympics promise to energise northern Italy and bring an influx of infrastructure spending. It should also boost the property market too in some areas.

The Milan-Cortina bid greatly impressed the International Olympic Committee (IOC) with its combination of a big European city and a popular ski resort. The project is being strongly backed by the private sector and national and local authorities.

One of the most expensive elements will be the Olympic villages. Milan’s is being built as part of a wider regeneration project at the old Porta Romana Railway yard. It’s expected to create 20,000 jobs in the construction of new roads and sports facilities.

The influx of visitors will boost the local economy too, with hotels and shops benefitting in particular. The railway is also going to be upgraded, as well as improvements to the already excellent road network.

The opening ceremony will take place at the San Siro Stadium, Ice hockey at PalaItalia Santia Giulia and PalaLido and the Medal Plaza will be the famous Piazza del Duomo. Figure skating will be at nearby town of Assago.

Whether you enjoy watching sport or taking part, Milan has all the facilities and great teams. Sports in the city range from basketball to volleyball and baseball to rugby.

The city boasts two international football teams, AC Milan and Inter Milan. Formula 1 fans, are also well catered for, as Monza is just a 38-minute drive north of the city.

Outside of Milan you don’t need to travel far to reach golf courses and water sports at the Italian Lakes. Many Milanese also enjoy winter sports in the alps and cycling and hiking in the countryside.

Thinking about moving to Italy? Make sure to download your Emigration Guide today.