Cyrus is a wonderful place full of local tradition, history and culture; but the influence of British rule, and more recently tourism, is plain to see and has had a huge impact on the island as we know it today.

The beauty of living in Cyprus is it can feel like a home from home thanks to the overt British influence over the years, with the added bonus of the Mediterranean sun and crystal clear waters to enjoy. The period of British colonial rule between 1878 and 1960 left an indelible print on the island. The legacy of which can still be seen today when passing traditional red telephone boxes – some of which have been painted green for commercial reasons – and yellow pillar boxes, which were repainted after Cyprus gained independence – a nostalgic nod to the past nonetheless.

The Empire has been consigned to the history books, only to be replaced by an army of sun seeking tourists and property buyers.

In modern Cyprus, the British still have a significant impact on the way of life. The Empire has been consigned to the history books, only to be replaced by an army of sun seeking tourists and property buyers who fall in love with Cyprus and decide to buy a permanent or holiday home here. Armed with sun cream and a wad of euros tourists make the pilgrimage from the UK each year – Brits made up 40% of the 3.2 million tourist arrivals in 2016. These healthy expat and tourist numbers ensures that anyone making the move won’t have to go far to find a friendly voice from back home. It’s not just Spain where thriving expat communities come together to make the most of their new home. 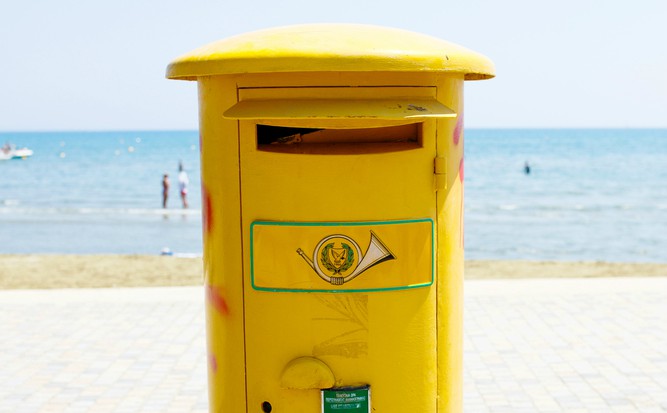 The continued use of pillar boxes is a legacy of British colonial rule. (ms. Octopus / Shutterstock.com)

The major resorts of Larnaca and Limassol on the south coast are particularly popular with overseas buyers looking for beach-based properties within easy reach of city amenities and an airport. Their popularity with British home-owners and holidaymakers means you won’t struggle to find a taverna serving a Sunday roast; but don’t worry they don’t have a reputation for being tacky like certain resorts in other Mediterranean destinations.

Cultural Paphos on the west coast is home to the largest expat population thanks to access to first class healthcare and international schools, as well its own airport. This was confirmed recently when the Interior Ministry announced that the Paphos district has by far the largest number of expatriates eligible to vote and run in local government elections. With Britons making up 5,320 of the 16,700 registered ‘EU community’ voters.

The major resorts of Larnaca and Limassol on the south coast are particularly popular with overseas buyers looking for beach-based properties within easy reach of city amenities and an airport.

If you’re worried you will miss your creature comforts from back home when you make the move to Cyprus, you can stop panicking. British high street favourite Debenhams has department stores located in Limassol, Larnaca and the capital Nicosia, where you can enjoy a panoramic view of the city on the top floor. If that’s not enough to satisfy your urge for all things British, why not head to Marks and Spencer in Larnaca or Paphos to pick up your smalls, or Laura Ashley in Nicosia to get your fix of floral designs.

If this has helped to settle your nerves about buying in Cyprus, you’ll be ready to work out your budget. To do that you need to know how many euros you will get for your pounds. Click here for a no-obligation currency quote.