The English father of Italian Football

If you ever worry whether as an expat you can make an impression on your newly adopted culture, take inspiration from Herbert Kilpin. He started life above a Nottingham shop and founded a sporting titan. Meet the “King of Milan”

Both Italy and Britain have a rich history of playing and supporting “the beautiful game” – football – that has been intertwined at both domestic and international levels for many years. This shared passion enables football-loving British expats to immerse themselves in the Italian football culture. Despite this sporting bond, however, the true extent of the two nation’s footballing ties is not common knowledge. To shed some light on this we need to dig deep into the archives.

Kilpin came up with the idea for the red and black kit, saying “We will be a team of devils. Our colours are red as fire and black as the fear of our opponents”

In Italian football history, there is an English gentleman that is often referred to as “the father of Italian football” and “the Lord of Milan”. In his homeland almost no-one has heard of him. After years of obscurity in England, however, there are finally plans to honour his memory on the centenary of his death, by erecting a plaque on the house where he was born and raised in Nottingham.

Herbert Kilpin was born on the 24th January 1870 above the family butchers shop in Nottingham. Upon leaving school he went to work in a local lace factory, during which time he cut his teeth on the football pitch for a youth team called Nottingham Reds Garibaldi. The red shirts worn by Kilpin and his team mates evoked those of the troops led by Giuseppe Garibaldi, the hero of Italian unification, who had travelled to the UK in 1864 to visit Nottingham MP and industrialist Charles Seely.

In 1891 Kilpin went to Turin to work for Edoardo Bosio, an Italian-Swiss textile merchant with links to Nottingham lace manufacturing. In the same year Bosio founded Internazionale Torino, believed to be the first Italian football club. Kilpin played for the team but in 1898 left Turin and settled in Milan with fellow Englishman Samuel Richard Davies. 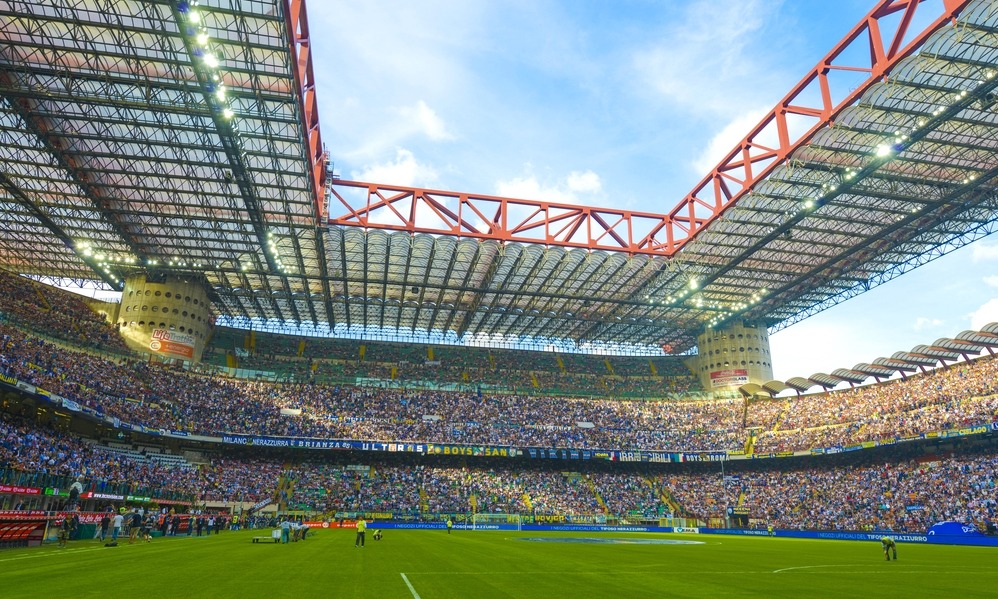 From a Nottingham back street to the founder of Inter Milan. Paolo Bona / Shutterstock.com

On 16th December 1899, in Via Brechet 1, not far from the Milan’s Duomo Piazza, the duo were among the charter members that formed the AC Milan Football and Cricket Club. At the time their main aim was to build a team that could beat Genoa; little did they know that it would become one of the most famous and successful clubs in the world.

Kilpin came up with the idea for the red and black colours for the kit; a deep red like the brick houses in Nottingham and black like the wooden beams. The club coined the phrase “We will be a team of devils. Our colours are red as fire and black as the fear of our opponents”. The gossip of the time recalls that Kilpin was a keen smoker and drinker of whisky, and that on his wedding day he left his Italian wife to go play a match in Genoa.

As well as founding the club and being a driving force behind it, Kilpin also served as player-manager. He retired from the game in 1899 because the Italian football federation were against non-Italians playing.

He died on 22nd October 1916, and his humble resting place on the outskirts of Milan was left forgotten, until it was tracked down by a football historian. Following a petition, Kilpin was inducted into the Famedio, the main building of the graveyard, where the tombs of the city’s most illustrious sons and daughters are located.

The only known copy of the statutes of the “Milan Football & Cricket Club”, printed in 1900, is due to go up for auction on 14th December. It has a starting price of €40,000, but it is estimated to reach €120,000. The 16-page booklet sets out a series of corporate rules and fees of the underwriters, with the names of the club president and directors on the front, including Kilpin.

The face of this Englishman can be seen on banners and scarves at the San Siro Stadium.

A book has been written about the life of Herbert Kilpin. “The Lord of Milan” is written by Robert Nieri, a UK resident of Italian decent. On 26th October, the anniversary of Kilpin’s death, Nieri came to Milan to pay tribute to his hero and promote the book’s launch at the University of Nottingham, in the presence of Kilpin’s descendants. Nieri also intends to write a children’s version of the book, so that they can learn how someone from such humble beginnings managed to fulfil his dreams. As Nieri says, “…with determination and effort, you can get everything.”

The post office in Milan issued a special postmark in Kilpin’s honour last month, and people visiting the World Museum in Milan received a free celebratory postcard. The face of this Englishman with the handsome long moustache can also be seen on banners and scarves at the San Siro Stadium, as a symbol of the clubs history. The building where the club was first founded is now a club shop.
Though not lauded to the same extent as in Milan, Kilpin hasn’t been completely forgotten in his hometown of Nottingham, where a bus and a pub frequented by local football fans have been named after him. Perhaps most fittingly, youth teams can now compete for the Herbert Kilpin Cup in the area close to where Kilpin lived and played football as a child. Humble tributes to one of the towns previously forgotten sons – “the Lord of Milan”.