Italy’s countryside is dotted with ancient villages crying out to be resurrected and repopulated. Could one be right up your street?

House-hunters looking for a special kind of character home in 2017 should head into the Italian interior, where the country’s estimated 20,000 deserted or semi-deserted villages offer some of Europe’s most exciting properties that ooze potential. These include ruins crying out to be restored and houses already brought back to life by local developers.

The country’s estimated 20,000 deserted or semi-deserted villages offer some of Europe’s most exciting properties that ooze potential

Over the decades, or in some cases centuries, economic migration to towns and cities, natural disasters or just a lack of infrastructure have caused the residents of thousands of small rural communities around Italy to pack their bags and go in search of a better place to live. 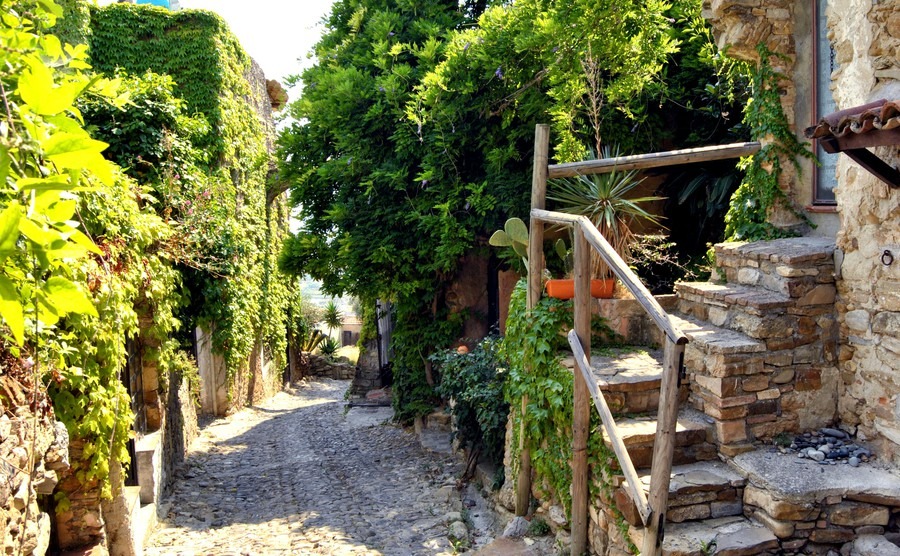 Abandoned Italian village that has been transformed

Most of these deserted villages are off-the-beaten track, surrounded by stunning natural scenery and typically boast beautiful stone architecture in varying states of disrepair. Some date back to Roman times, many boast incredible fortified buildings.

So it’s hardly surprising an increasing number of foreign buyers are snapping up these ruins to transform into a one-of-a-kind second home, or choosing a key-ready house already carefully converted complete with all mod cons. Interest from foreign investors is coming from as far afield as China and the USA, with some buyers taking advantage of the cheap prices to snap up a collection of buildings or an entire hamlet, perhaps for turning into a hotel.

“One memorable restored property I visited in a settlement near Gubbio, Umbria, was a former chapel that had been converted into a one-bedroom cottage,” said Richard Way, editor at PropertyGuides.com. “It was owned by a Scottish couple and on one wall of the bedroom there was an original 14th-Century fresco [pictured], which took six months to restore before the property could be inhabited. It’s features like these that make restored ruins so unique – it’s history and there is no interior designer in the world that can replicate that.”

On one wall of the bedroom there was an original 14th-Century fresco, which took six months to restore. It’s features like these that make restored ruins so unique. 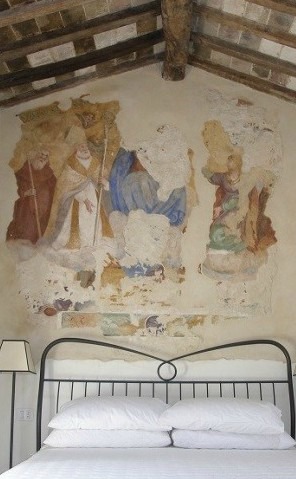 Staying in Umbria, deserted or semi-deserted hilltop villages where doer-upper properties can be bought for a song include Roviglieto near Perugia. Or for something ready to move into, there is medieval Postignano, which has been transformed into 60 apartments, ranging from 70-90 square metres and spread across 13 beautifully restored buildings, clustered around the medieval church and tower.
For readers feeling especially ambitious, an example of somewhere transformed into a hotel, the rooms and facilities spread amongst selected buildings around the village, is Santo Stefano di Sessanio in Abruzzo. The village was abandoned in the 19th Century with the demise of the local wool trade. In 2004 it was bought and its transformation into the ‘Sextantio’ hotel began, triggering further interest from other private buyers in the remaining empty buildings.

Another hamlet within Abruzzo’s Gran Sasso national park currently for sale as one lot is Valle Piola. What do you get? The asking price of €550,000 includes 15 buildings covering a total of 4,400 square metres and six hectares of land, as well as the support of the local council to make it a tourist based business and team of surveyors and architects on hand to assist. The estimated cost to complete the project is €4million to €5million – beyond most people’s budget, but when you think what that would buy you in the centre of Milan, or even London, it doesn’t seem so bad!